Pizza and a movie at the new Assembly Row in Somerville 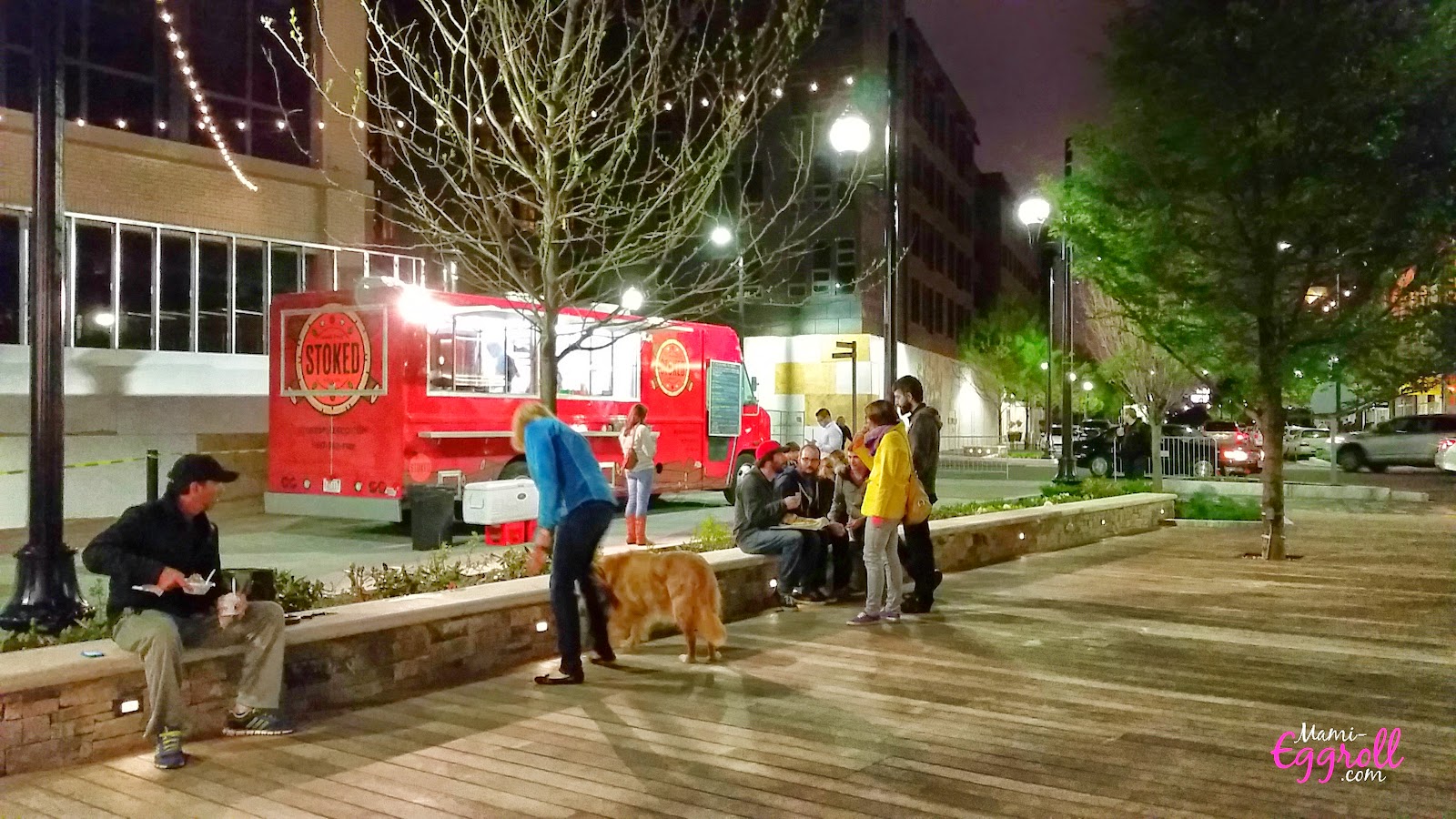 The highly anticipated Assembly Row in Somerville had its grand opening this weekend.  The new neighborhood complex will feature a movie theater, outlet stores, restaurants, residential units as well as office space.  Only some of the shop were open in time for memorial day weekend so the Mo and I went to check out a movie at the AMC theater on site with some friends.

The area was easy to find via Google Maps.  DO NOT USE YOUR CAR navigation system as most of the streets probably didn't even exist a couple months ago.  There was plenty of street parking, lot parking and garage parking.

We got there a little early and browsed the shops that were open, Converse, Nike, Puma and Charlotte Russe.  Although Saks Fifth Avenue was offering Memorial Day weekend discounts, I was intimidated by the prices.

The Assembly Row area was brand new and clean.  The architecture and landscape was incredible.  I couldn't believe I was still in Massachusetts.  It felt like I was somewhere in the west coast.  The streets were mostly lit by ornamental LED street lighting but there was some areas with cute string lights that added a nice charm to it.

For entertainment venues, the Lego Discovery Center and AMC movie theater was open. 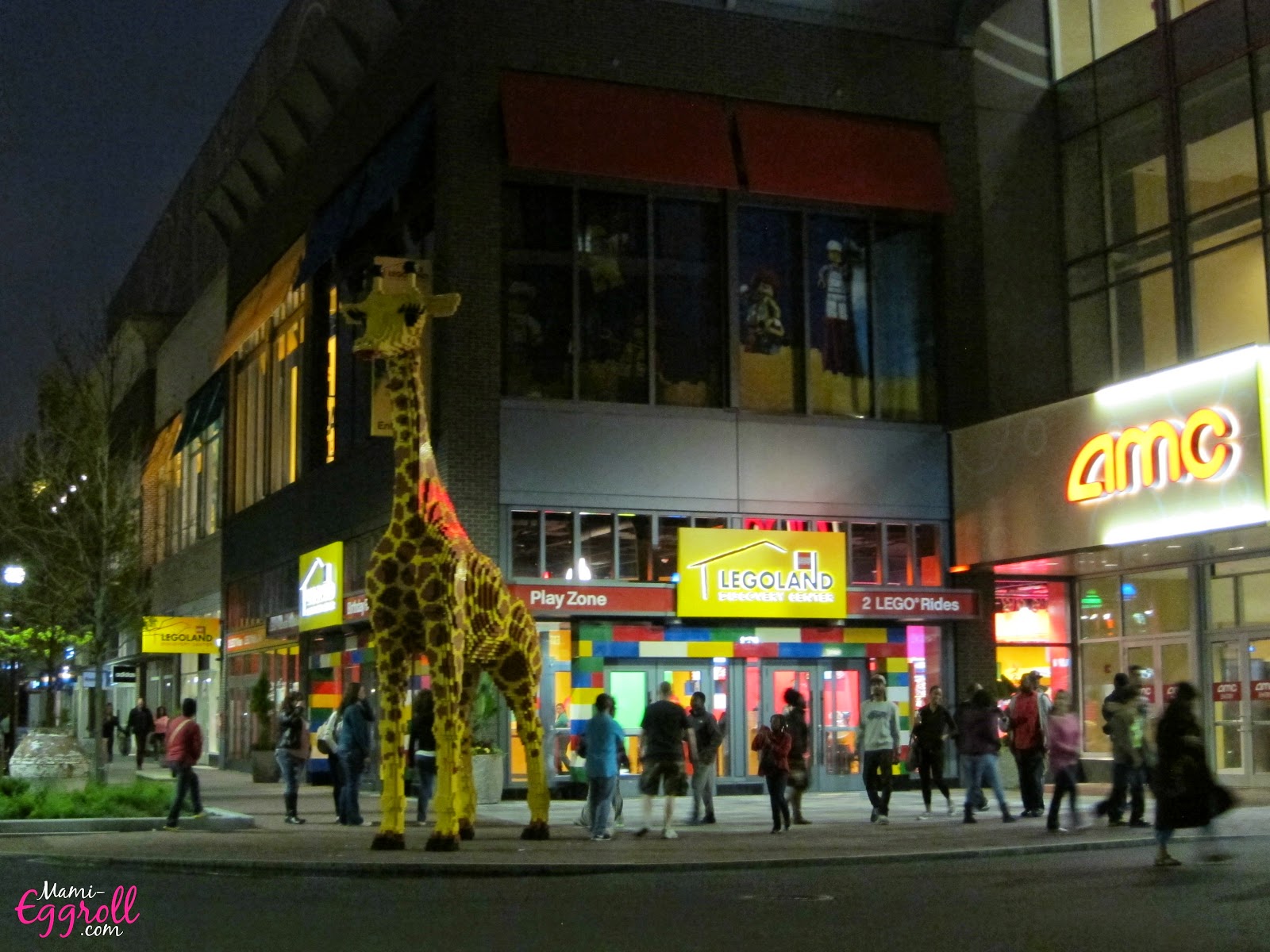 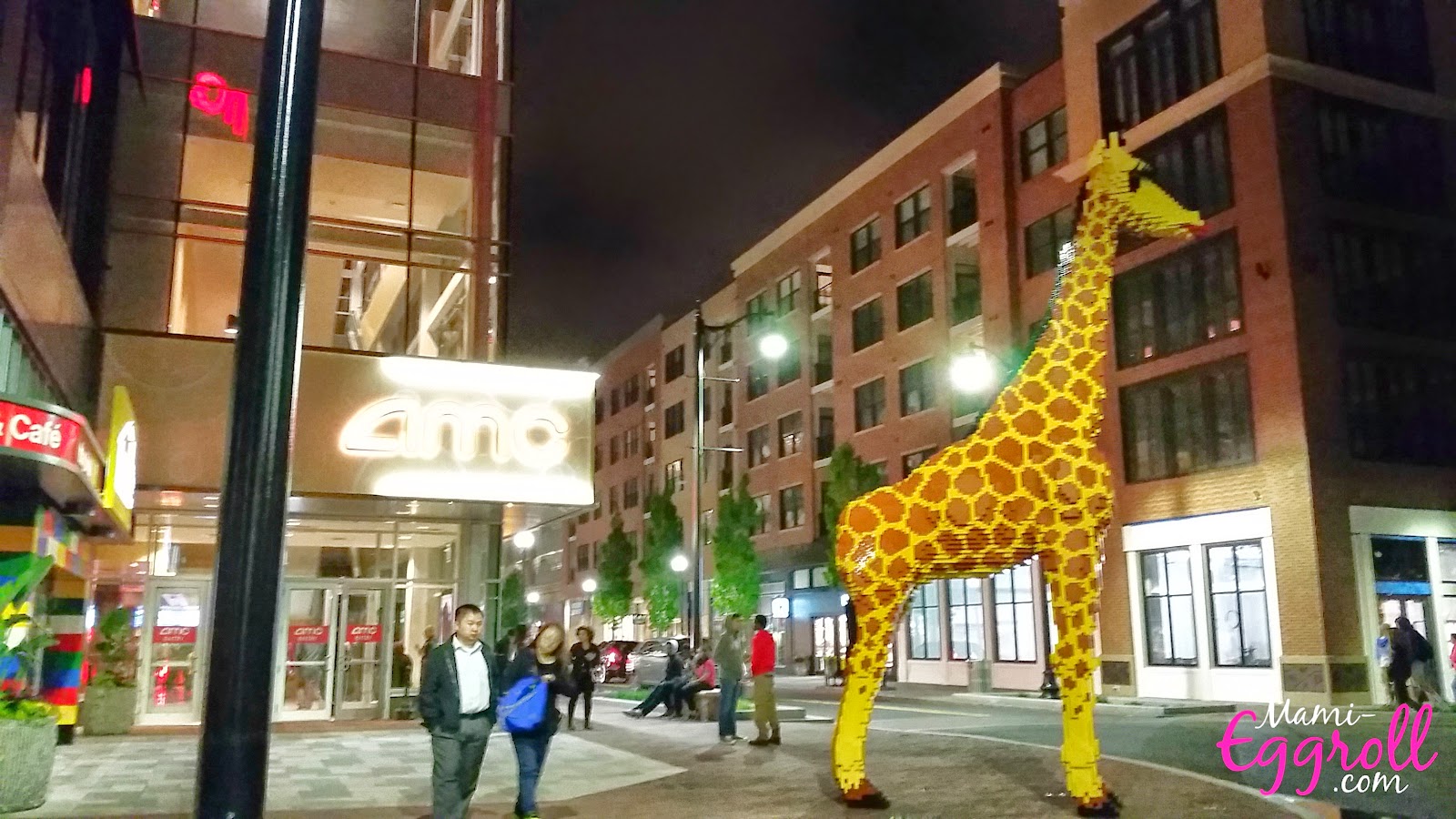 We had plans to grab Chau Chow after the movie but was hungry at the moment since the last thing we ate was lunch at noon.  None of the restaurants were open yet but there was J.P. Licks, an ice cream, yogurt and coffee shop. 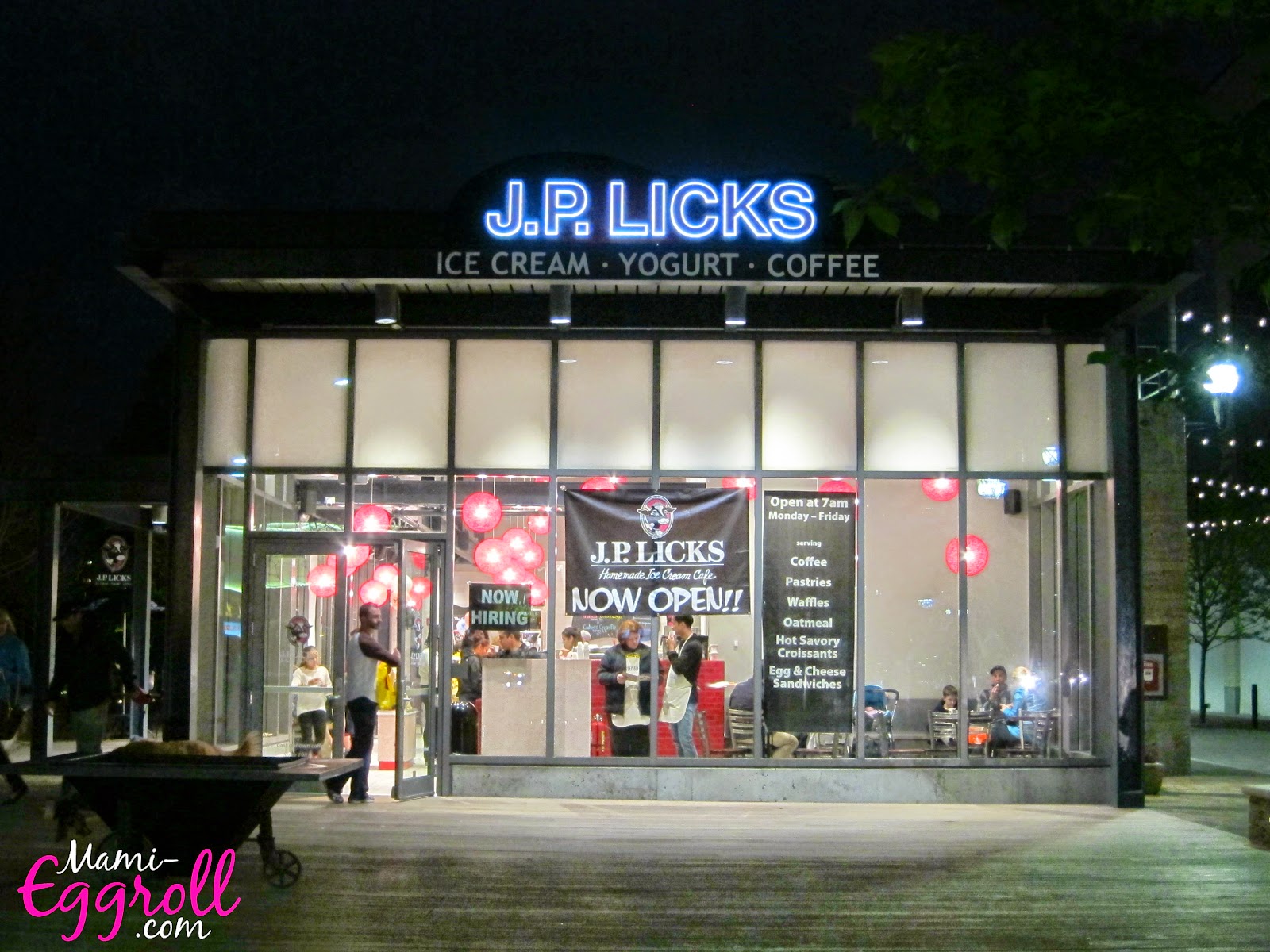 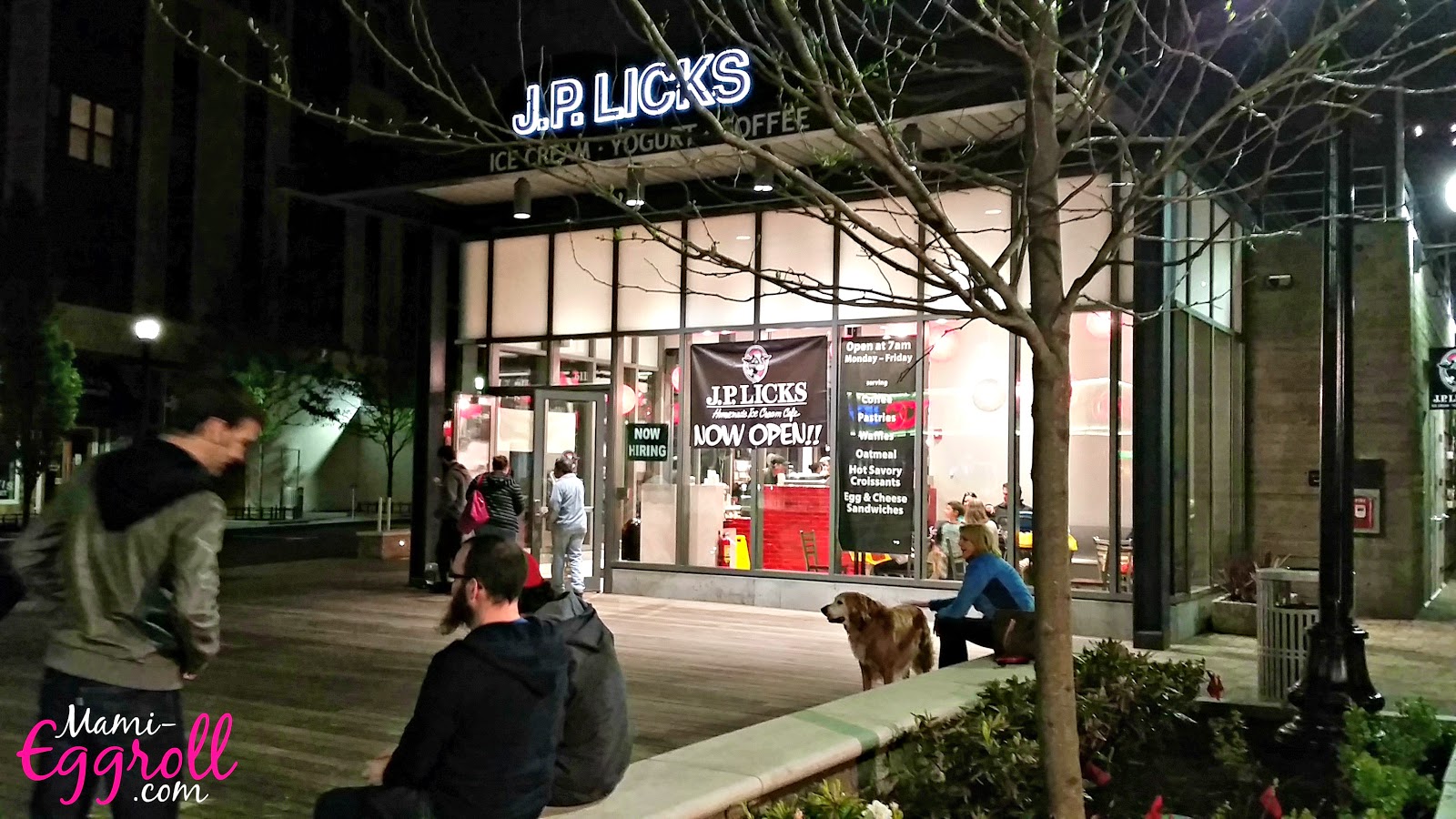 We spotted a food truck selling wood fired pizza nearby and went to check it out. 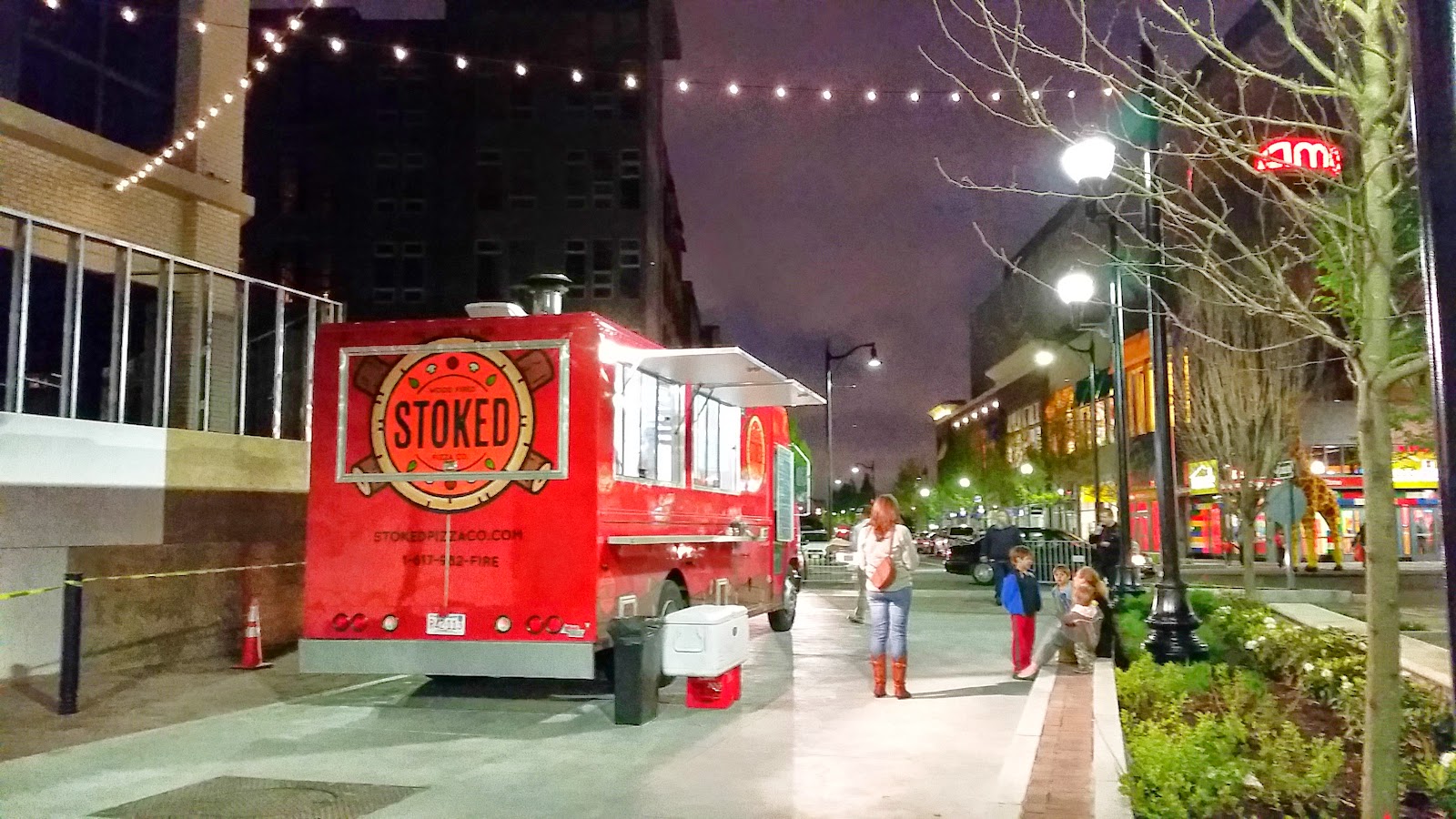 Stoked Wood Fired Pizza is a Boston based food truck serving made to order wood fired pizza.
The information on their website explains they used the ancient technique of wood burning to cook their pizza to achieve one that is soft and light on the inside with a crispy outer shell and crust. 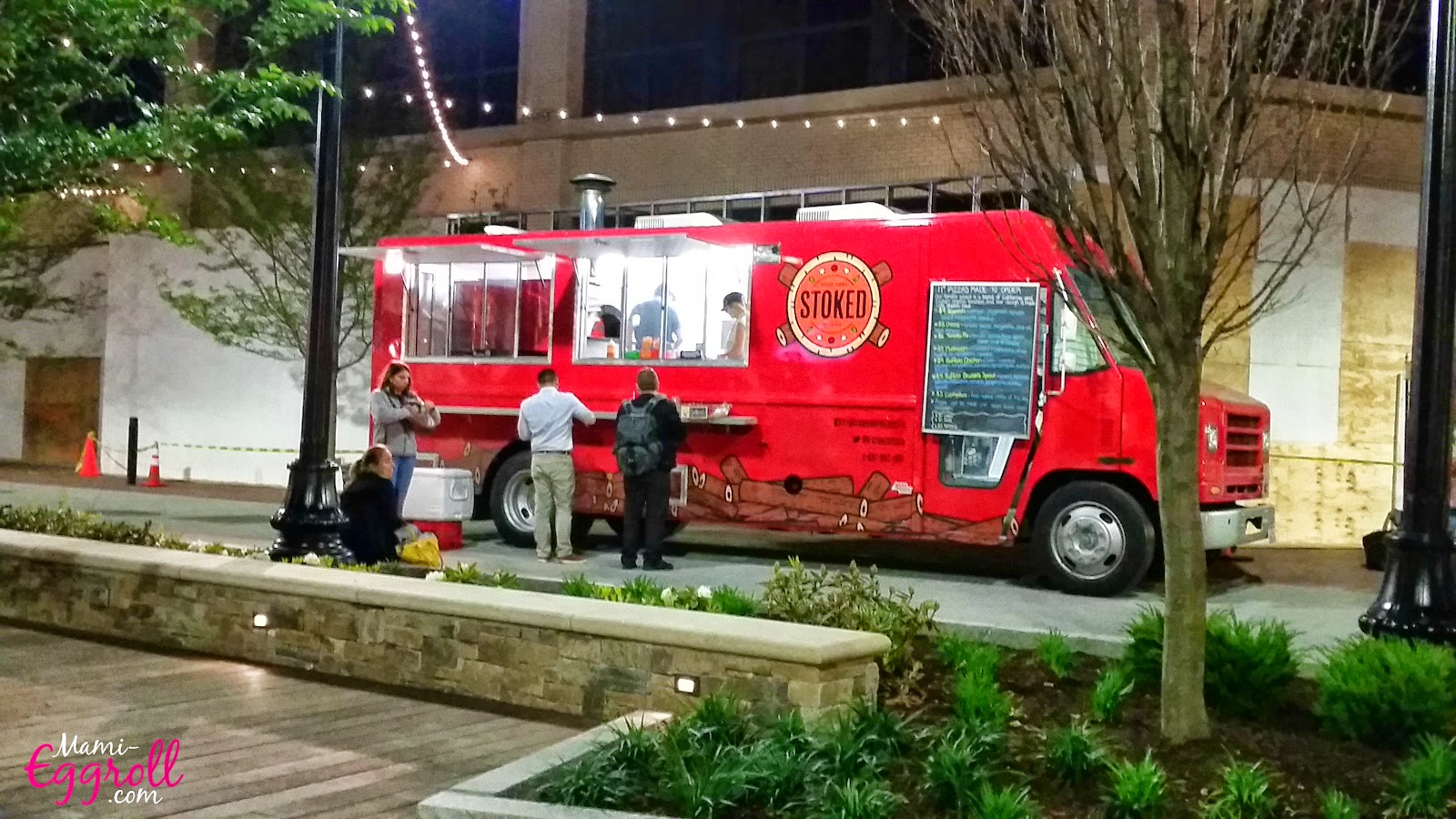 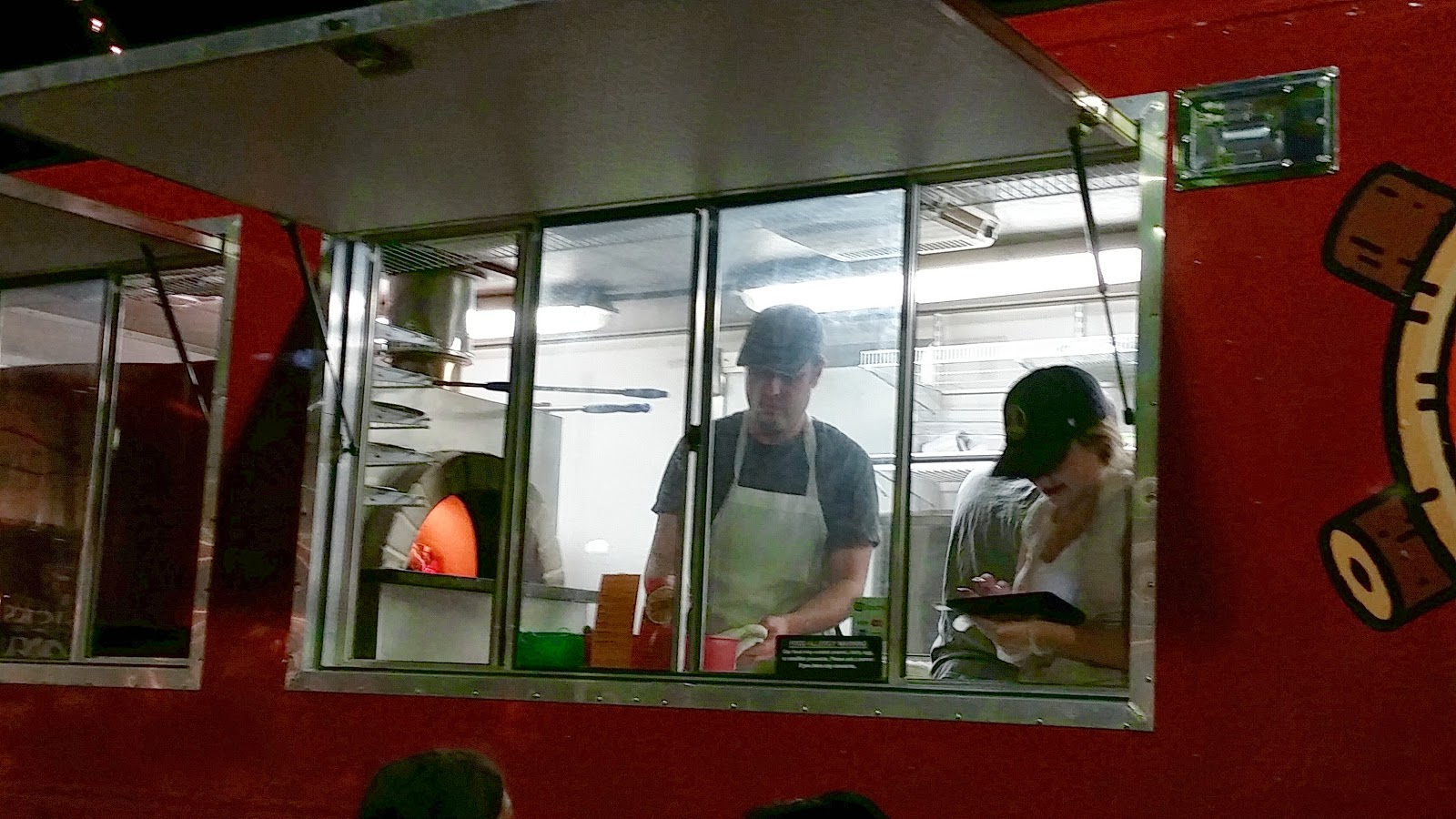 In addition to pizza, they also have creative cookies and dessert from "Cookie Face" their in house pastry chef. 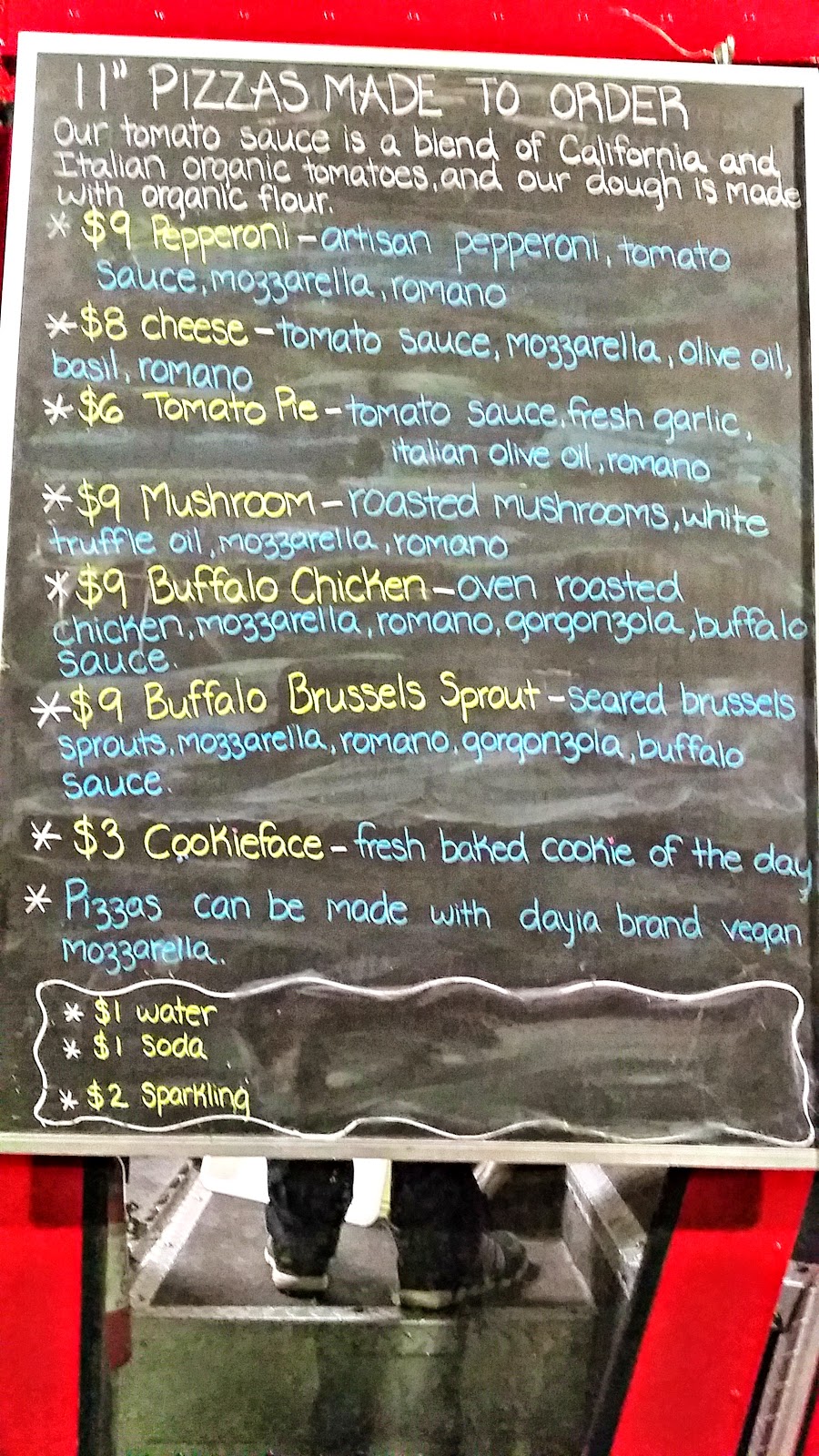 Most of the specialty pizzas were about $ 9.00 for an 11" size.  We opted for the Buffalo chicken with oven roasted chicken, mozzarella, Romano, Gorgonzola cheese topped with buffalo sauce. I'm not sure if I was just starving or not but the pizza was wonderful.  It was soooo good! Everything tasted fresh and the crust was perfect; it was soft, crispy and chewy. 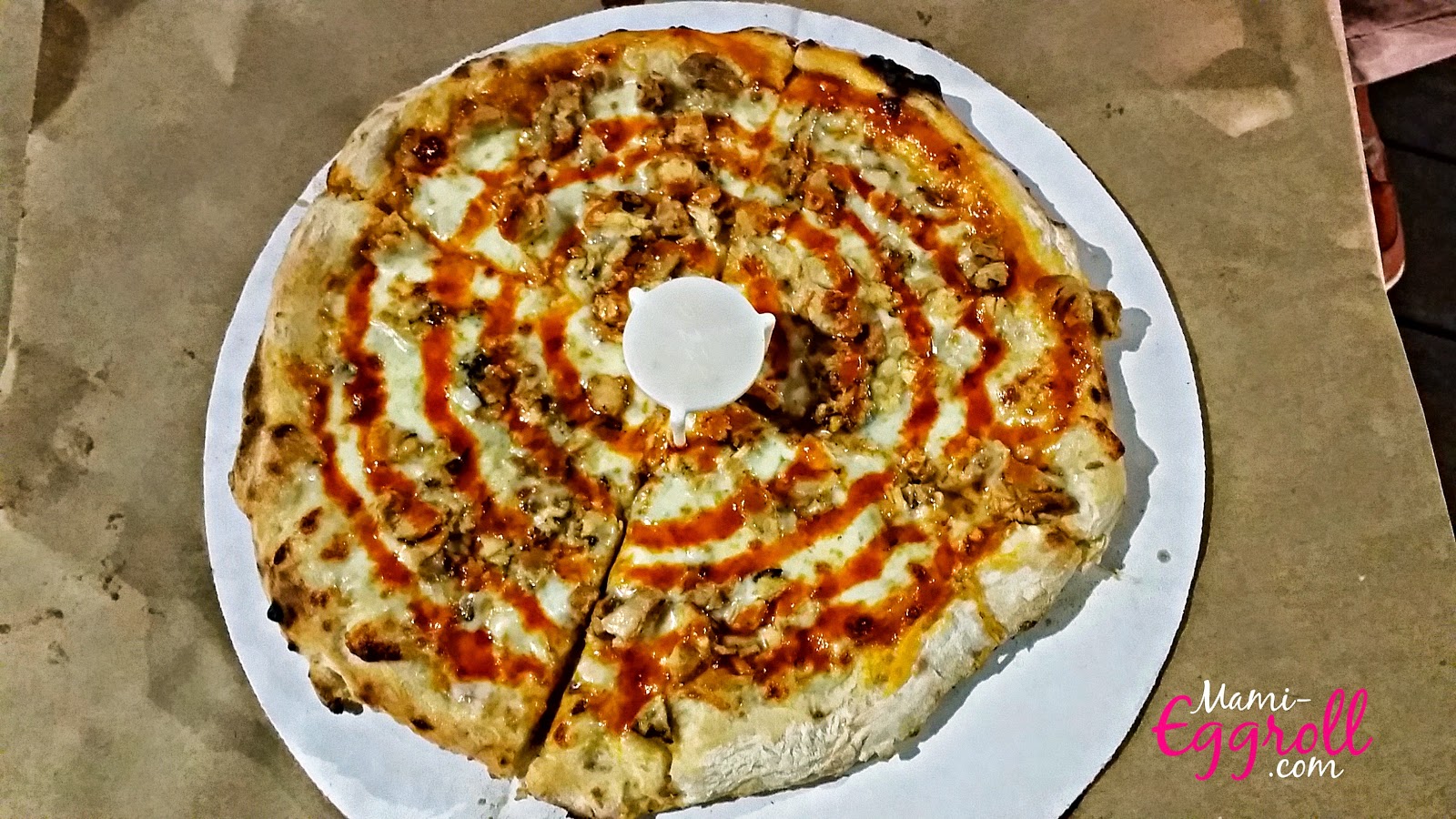 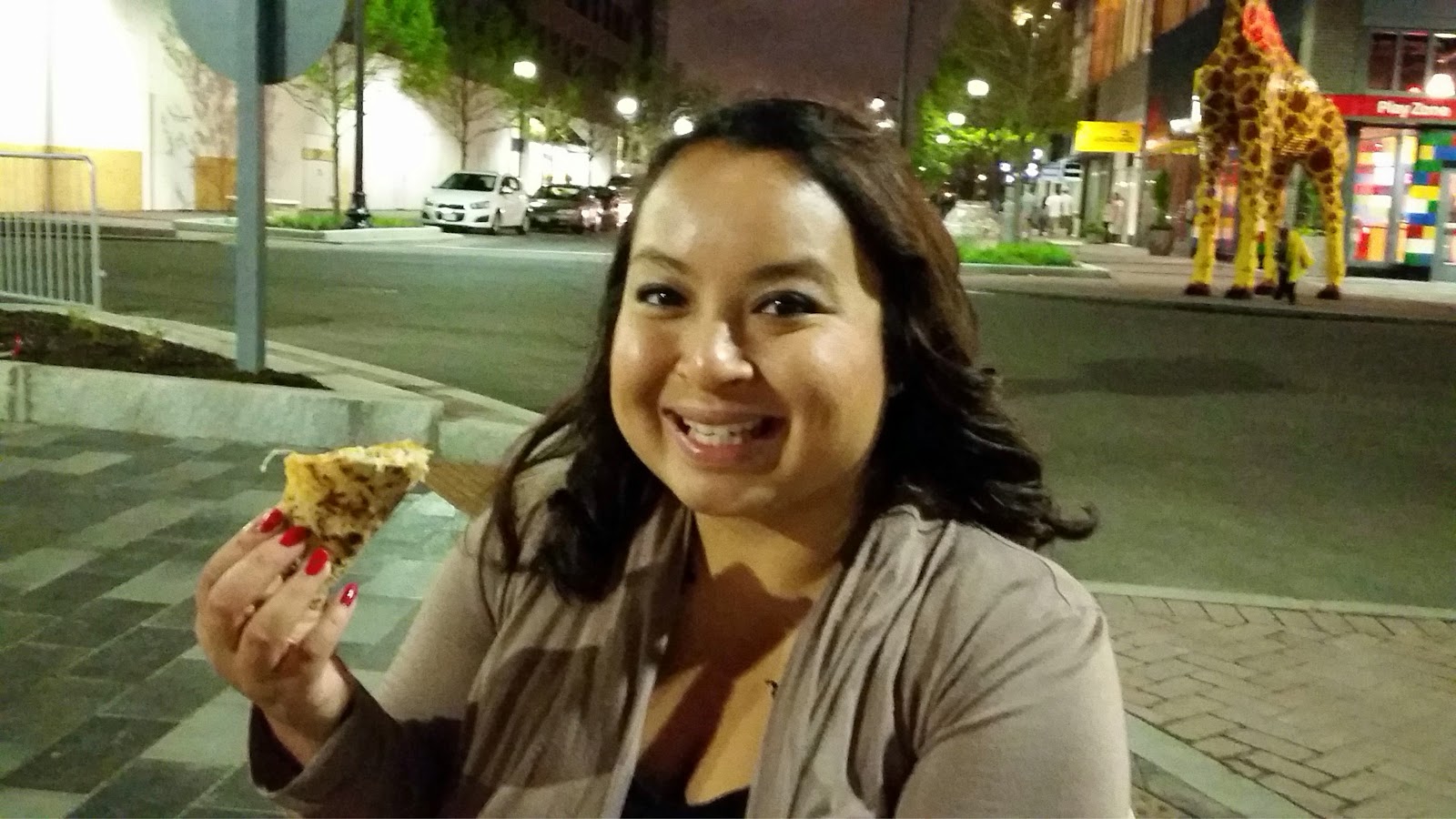 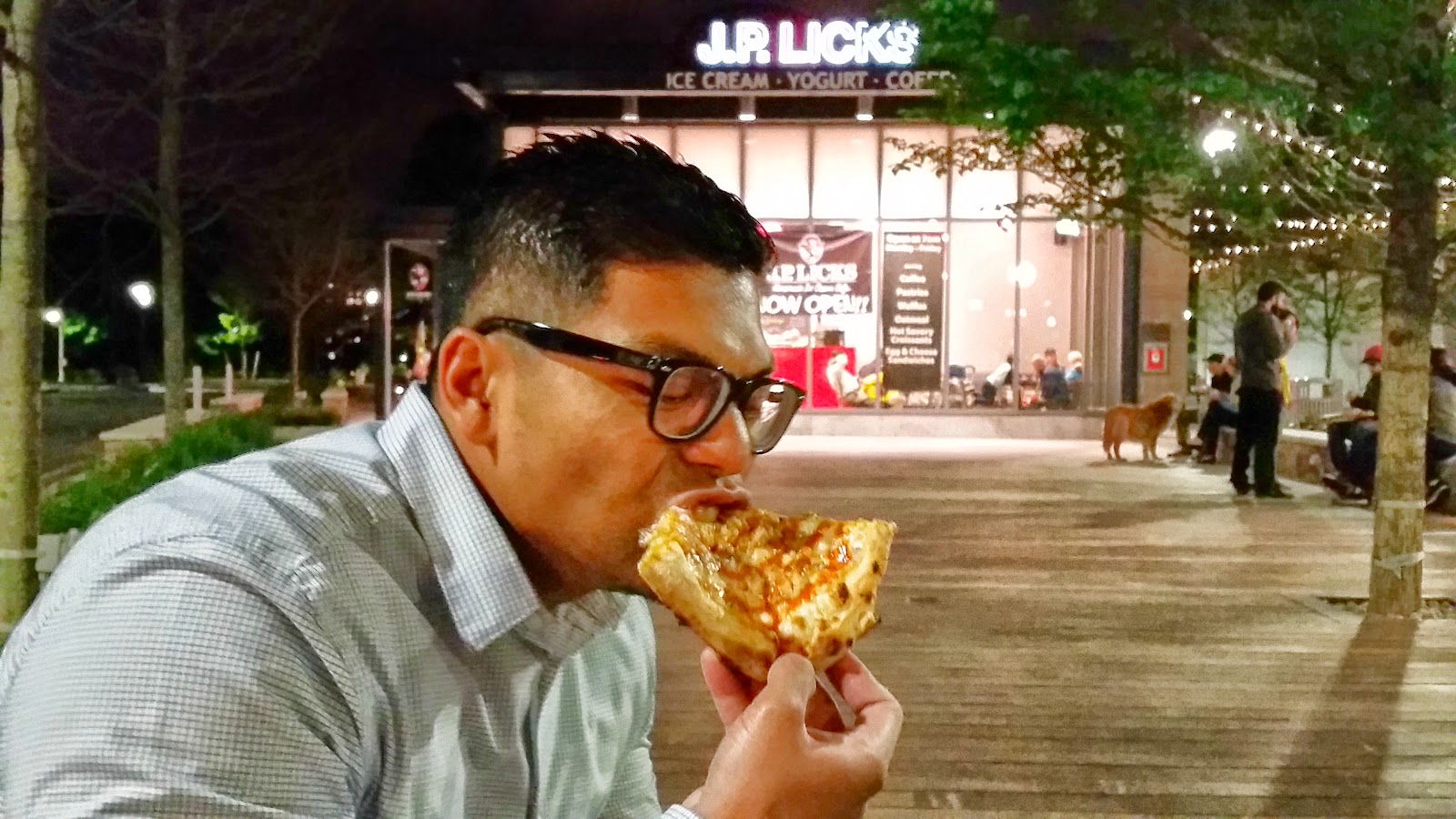 We had purchased our movie tickets online earlier so we didn't have to get there super early to find seats.  I thought that was the best thing ever! How come this wasn't thought of sooner?  I thought it was really cool that there were semi-private sections with a partial wall for two people on the sides suitable for dates.

Ticket prices were reasonable at $12.50 for normal screenings and $ 16.50 for 3D with an additional $1.00 processing fee per ticket if you purchase online. 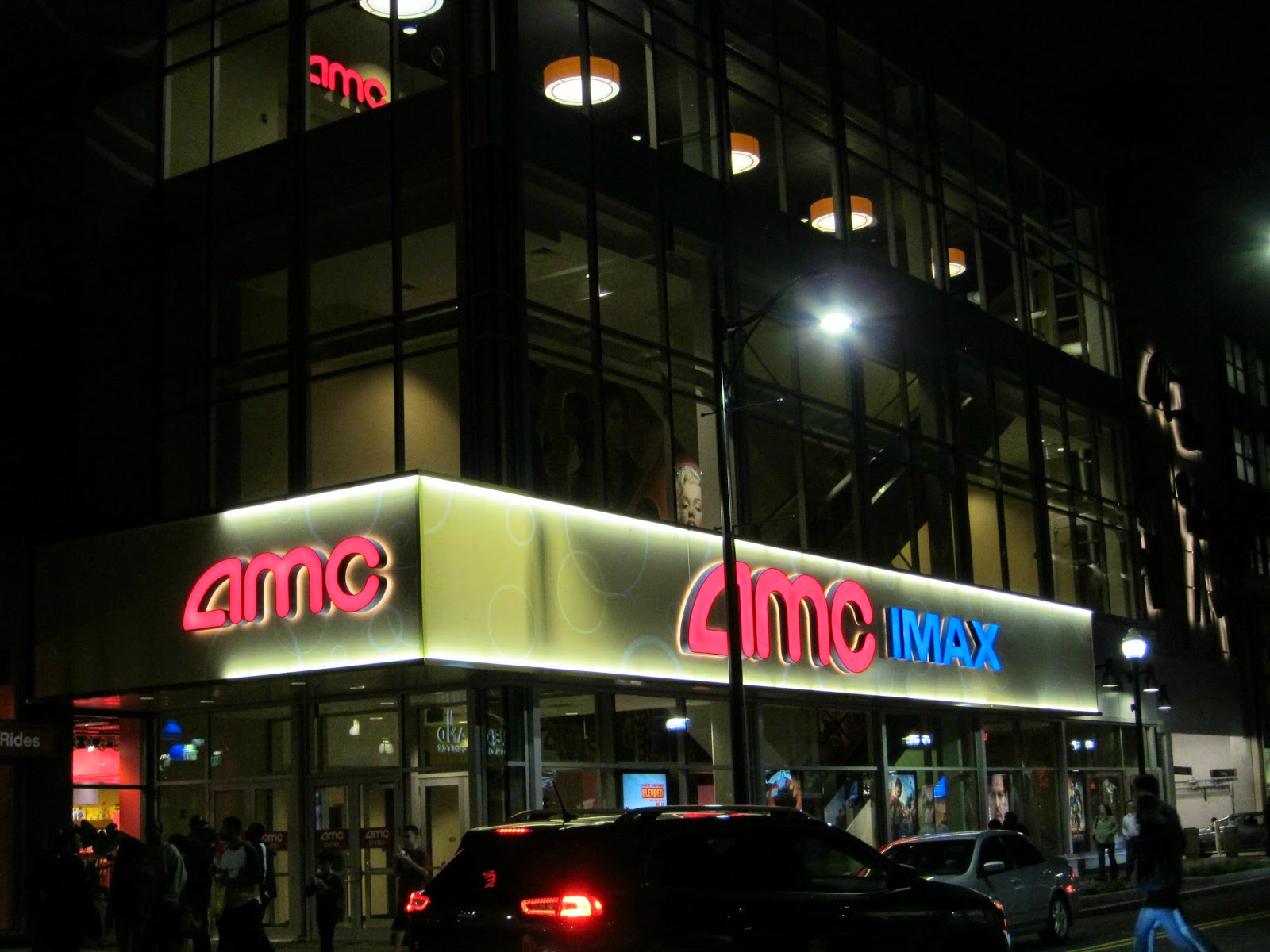 We picked up tickets in the lobby through a self kiosk, otherwise we would have to wait in the long line. 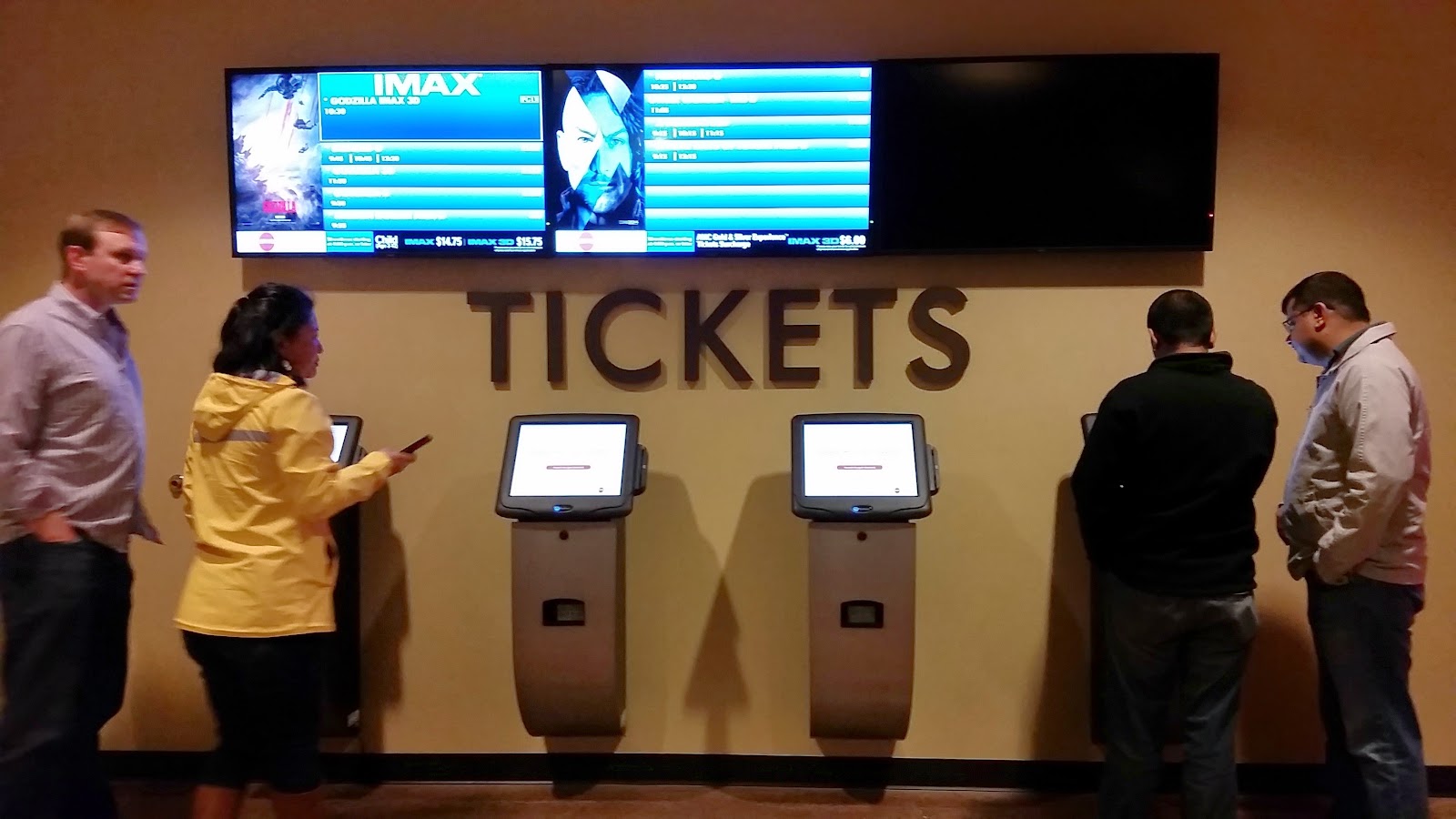 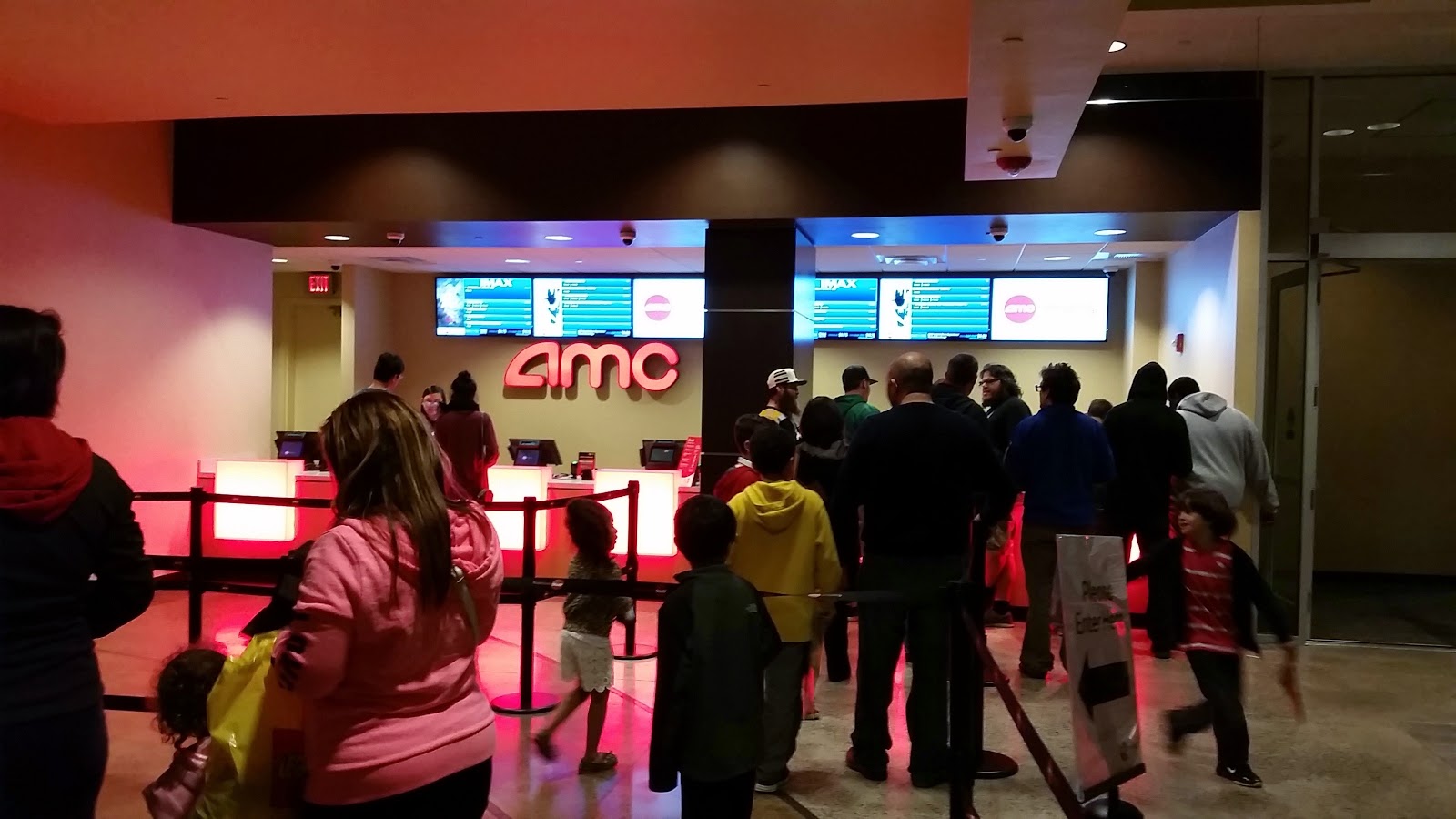 We took the escalators up the stairs into the 2nd floor lobby featuring beautiful pendants.  There were additional opportunity to buy tickets. 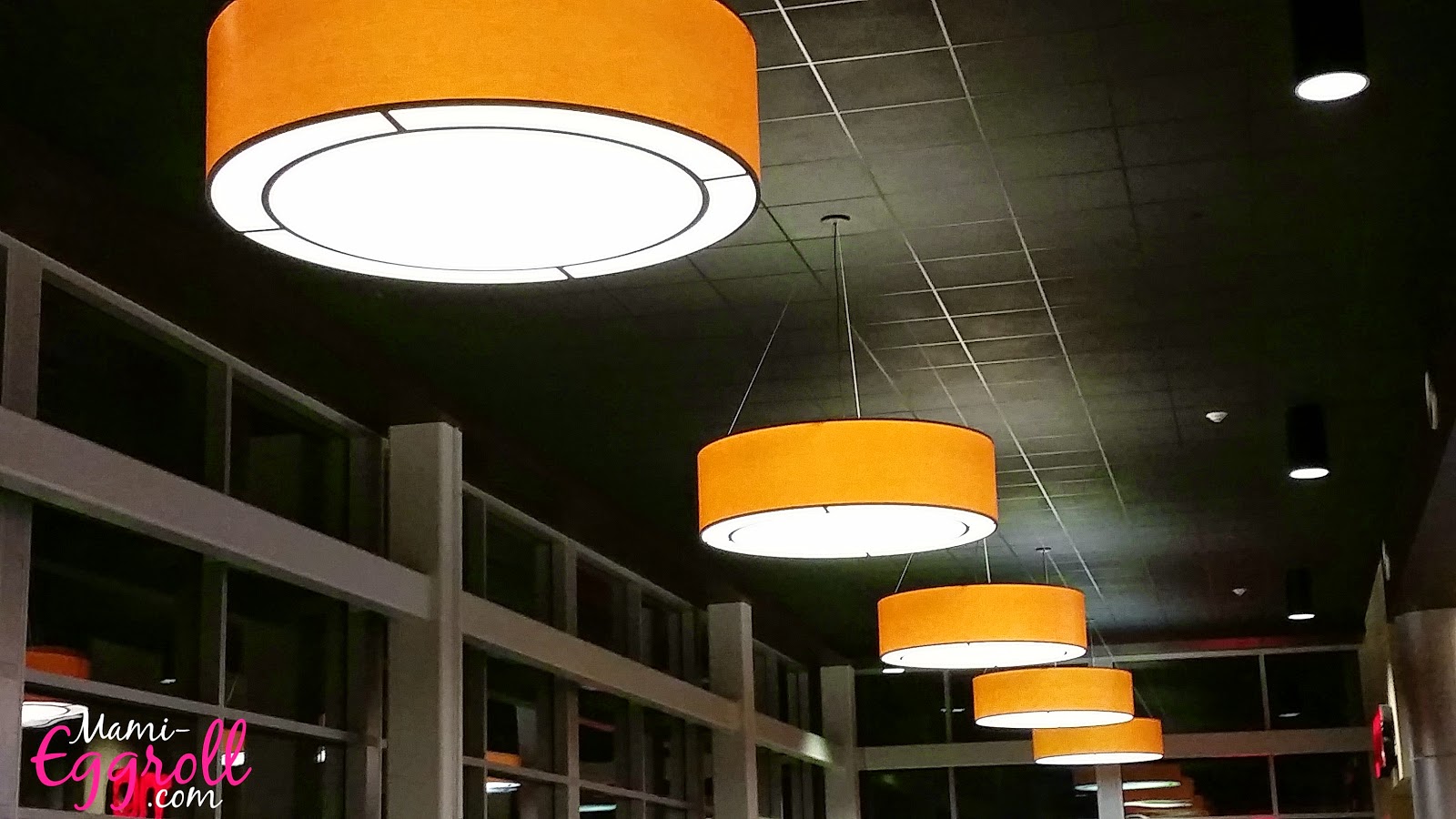 Although MacGuffins wasn't open, we sat in the bar tables as we waited for our friends to arrive. 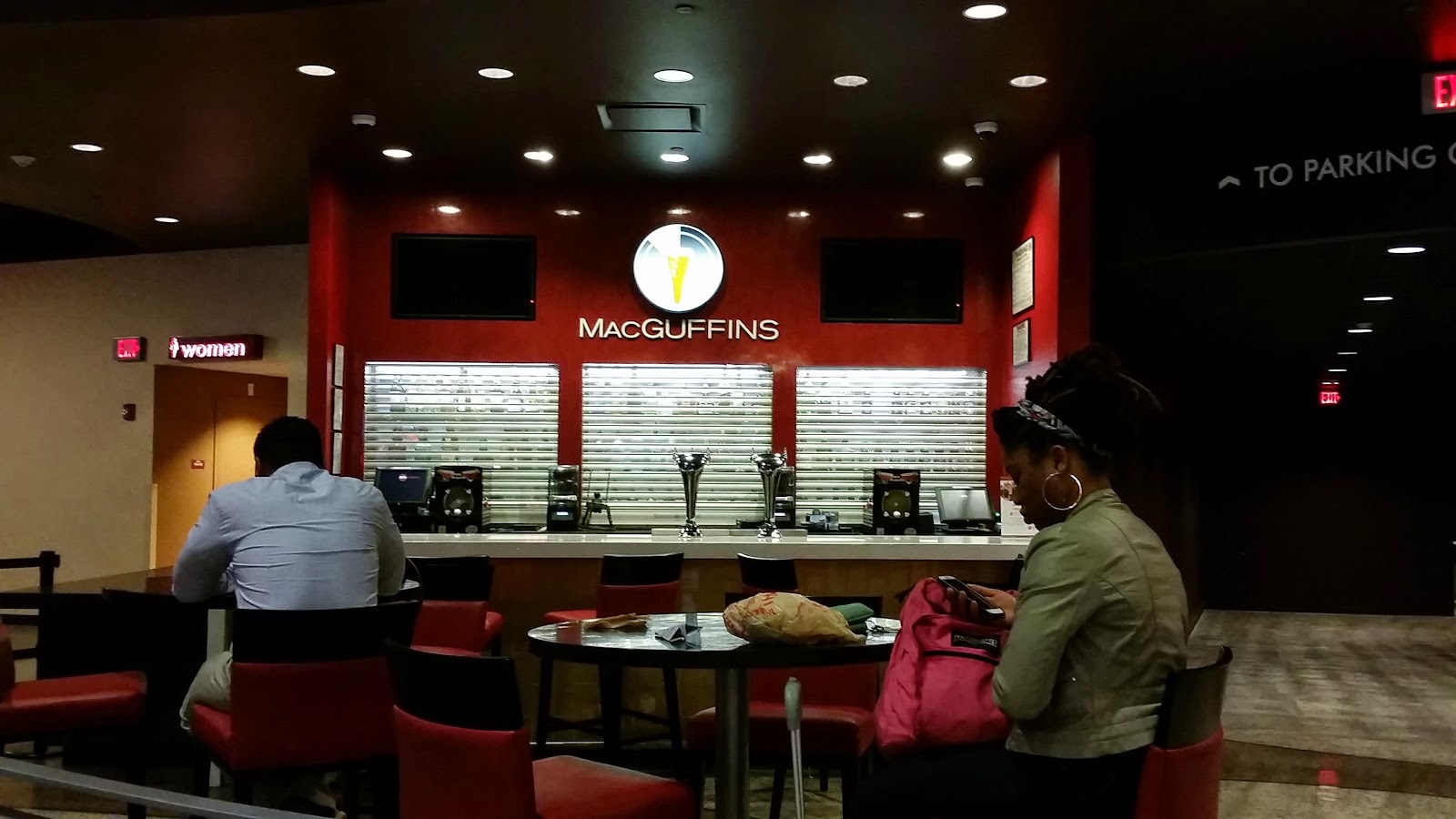 One of my favorite features of the theater was the modern concession stand set up as a Market Place convenience store where you can grab whatever you want, pay and go.  Although it's pretty convenient, I can see lots of issues that can arise with this as well.

For $ 14.00, we got a large soda and popcorn with unlimited refills.  I thought this was great for a family.  Alice and I joked that we never got to buy anything at the movies when we were kids.

I LOVED the Coca Cola fountain machine with more than 100 drink choices.  There was more than 1 diet option! How awesome is that?? 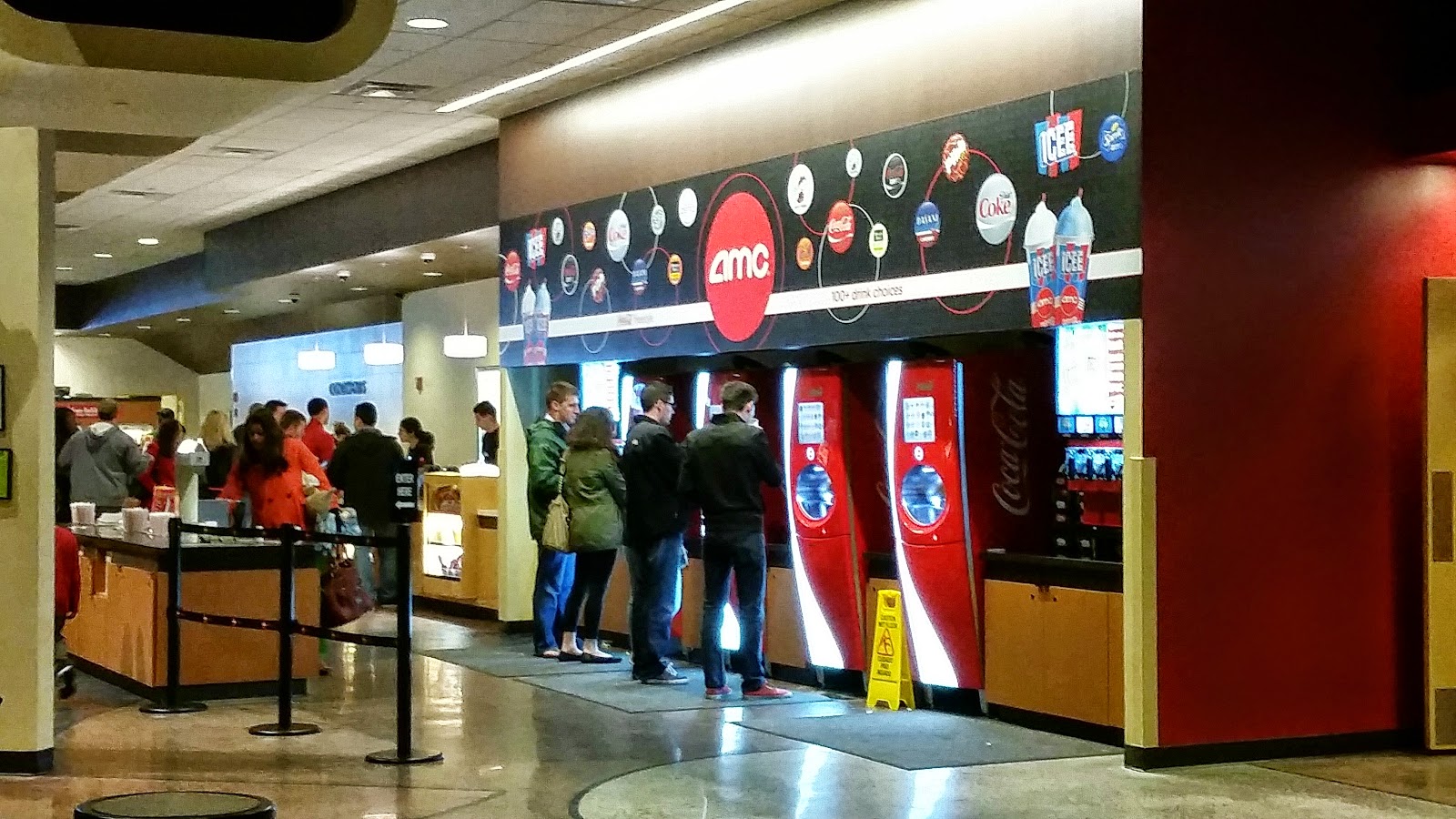 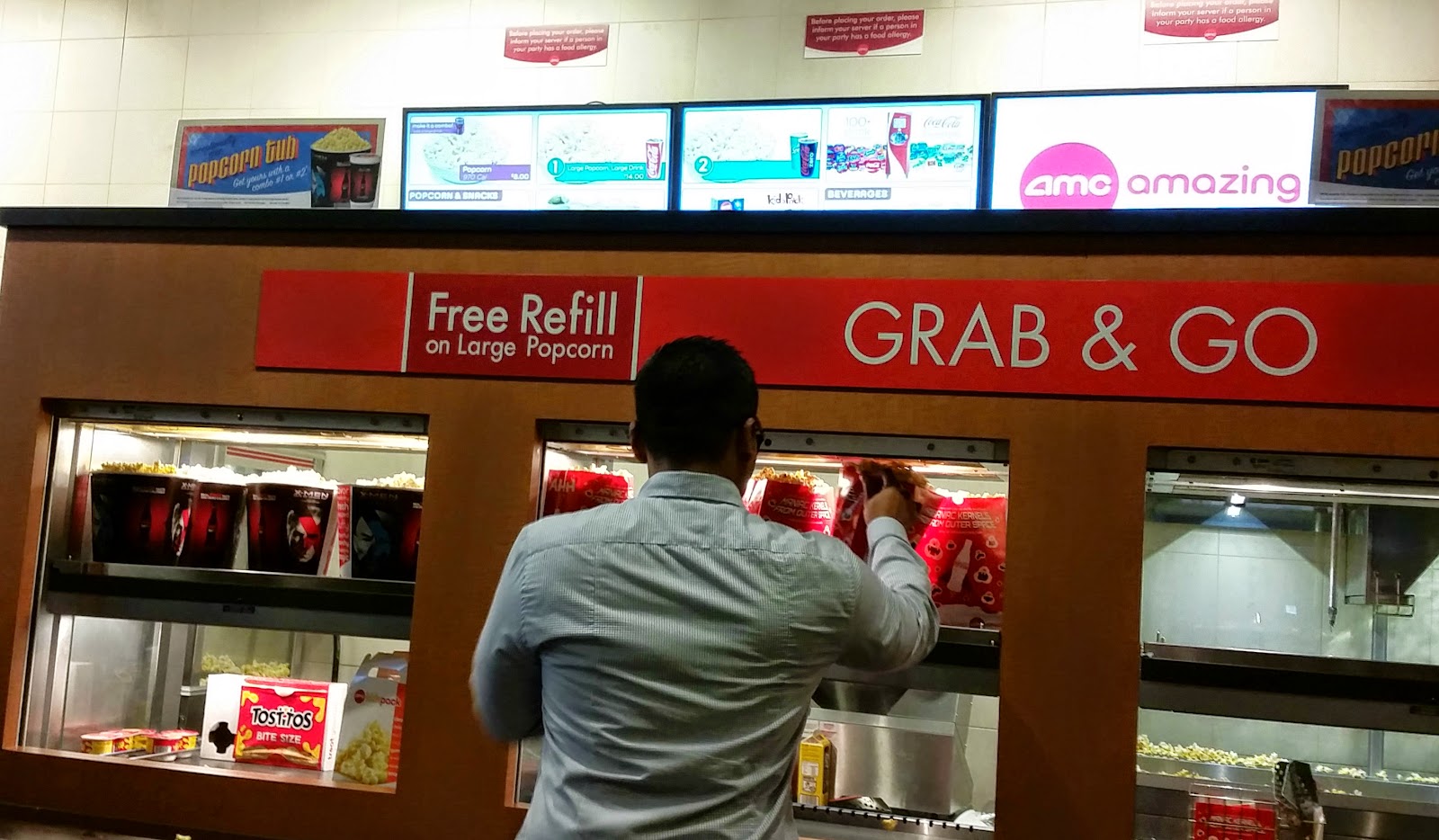 Once we grabbed our munchies, we headed towards our theater. 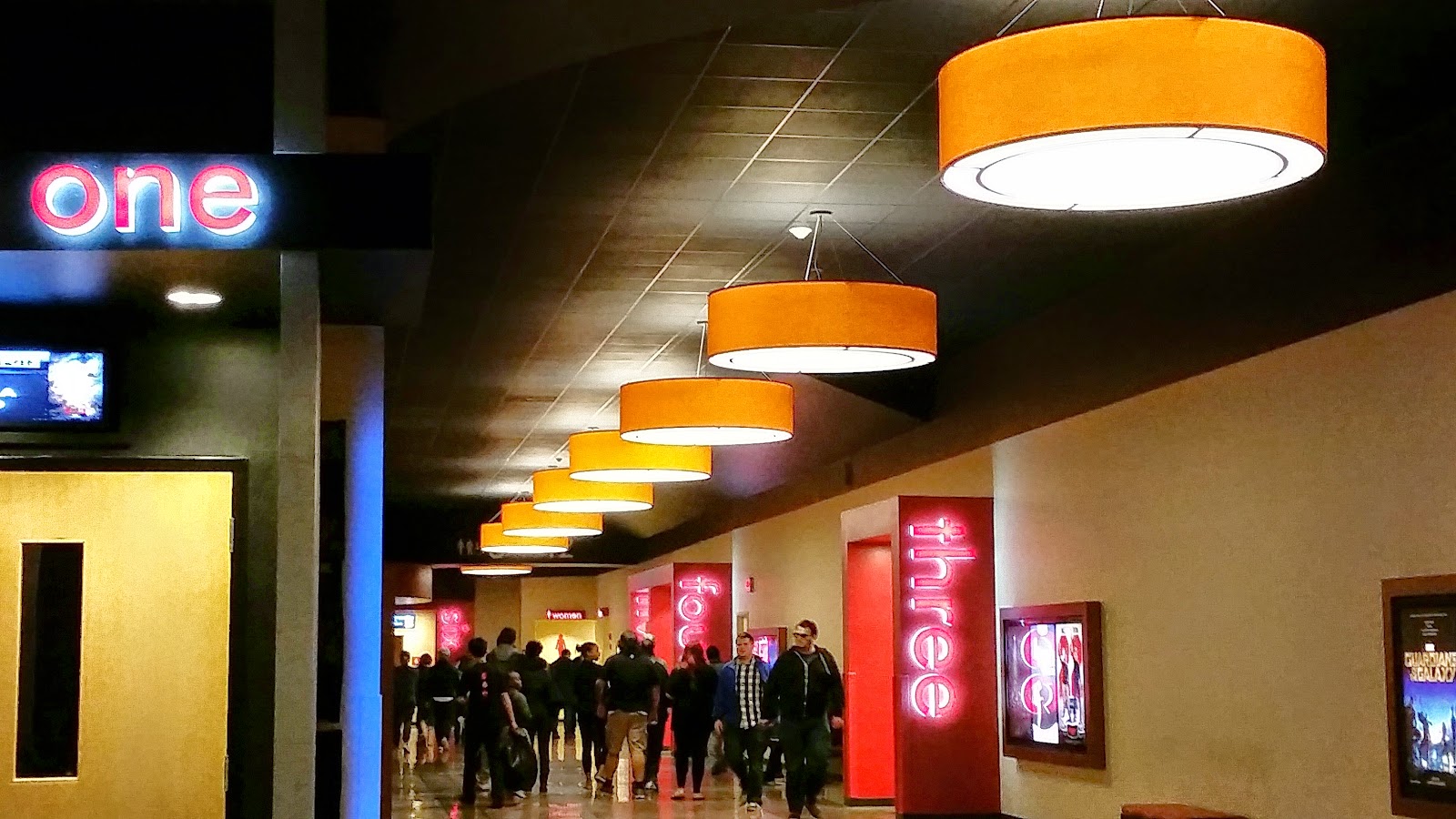 The stadium style seats were plush and comfortable made from red leather.  There were large and roomy and came with plenty of space for drinks and food.  I even had a place to put my purse.

The pic below was stole from Google image, it wasn't our exact seats or theater, but you get the point. 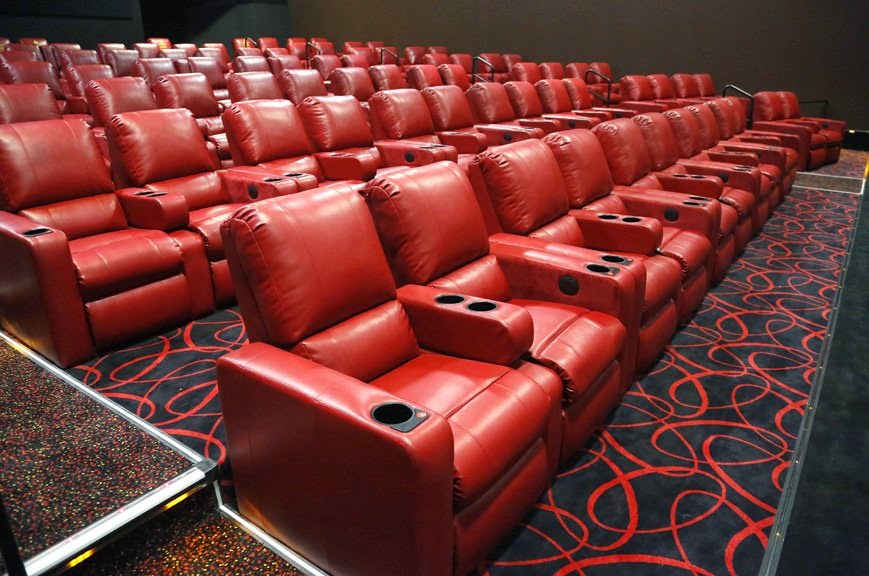 It was a great night.  Unfortunately we didn't make it to Chau Chows.