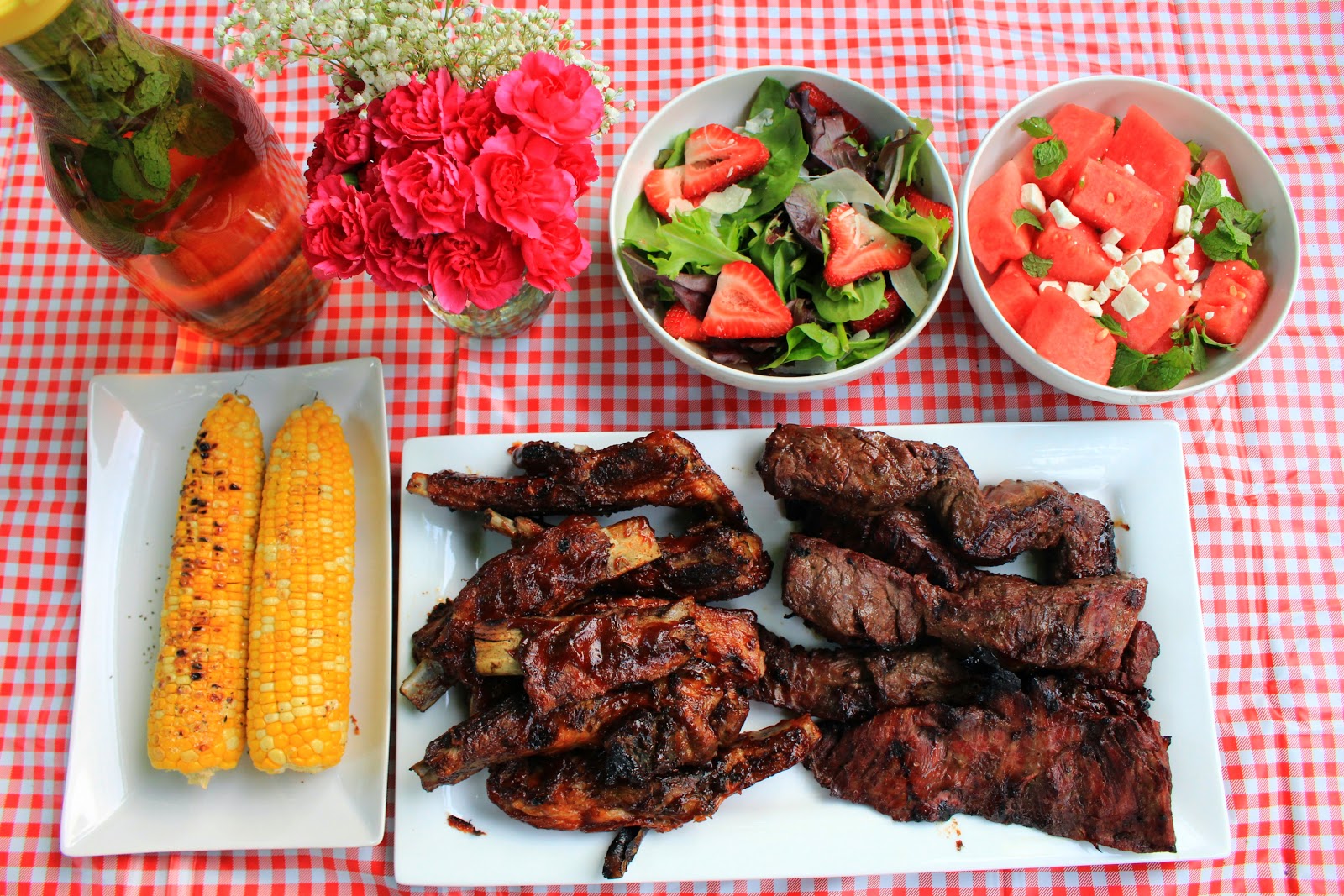 You would think Sunday is part of the weekend and it's a day to rest & relax but in our household, it's probably one of the busier days of the week.  We typically do a couple loads of laundry, a load of dishes, "tidy up the house", go to the gym (when we are on our routine) grocery shop and prep meals (lunches & dinner) for the week.

Prepping for dinner is so important because when we get home, we just want all the cooking, eating and cleaning done before 7 PM.  On Sundays, is when the meats get marinated and the vegetables get chopped. I've also started to make fruit salad for breakfast and lunch so the watermelon needs to get cut too. (I'm too cheap to buy pre-cut fruit)

I usually cook breakfast on Sundays but today I overslept and was extra tired and groggy....I know.. first world problems.  We grabbed dim sum at China Star instead.

Since the weather was nice this weekend, I thought I would bring out the grill.  After my counter top induction oven, it's probably my 2nd favorite cooking gadget. 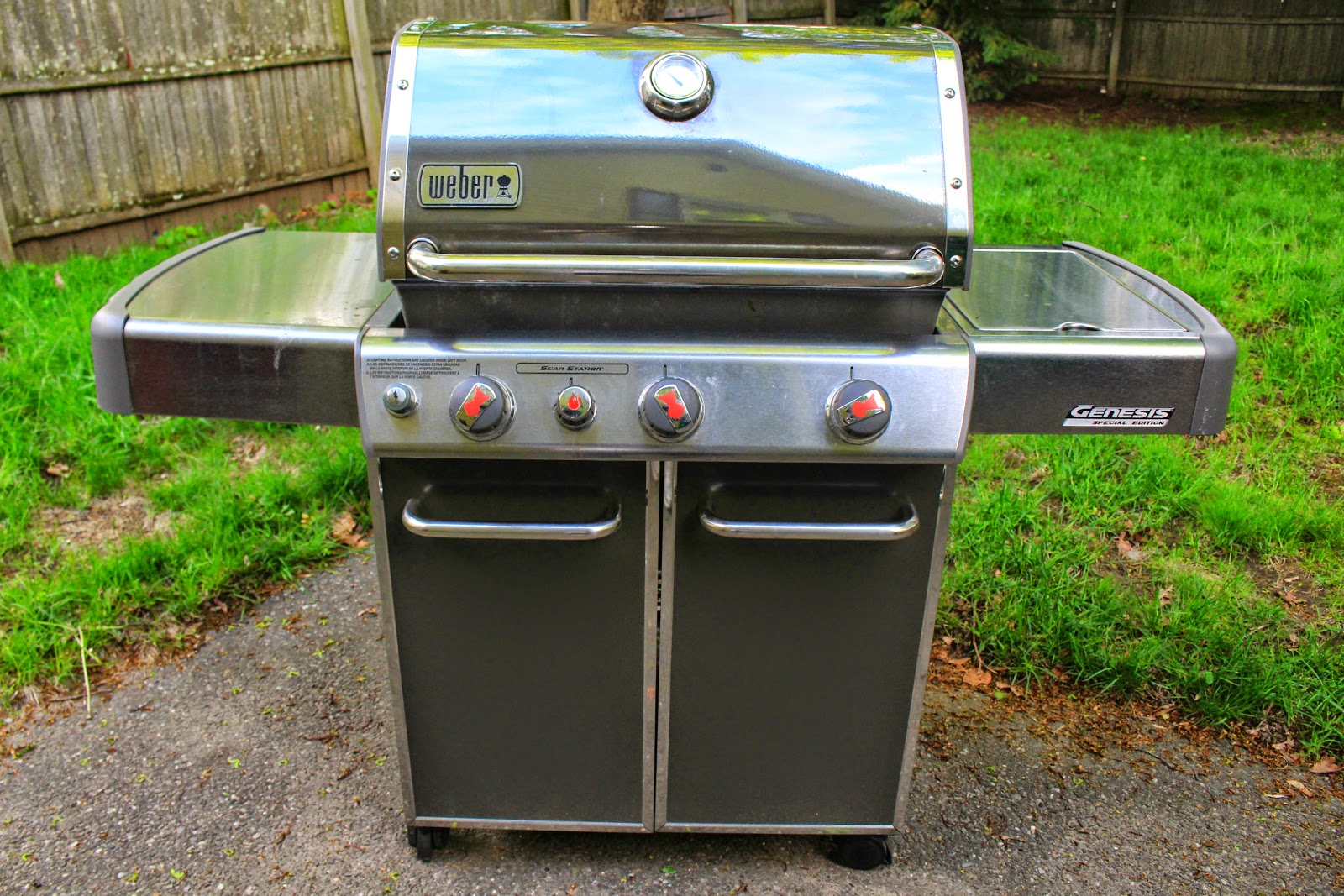 To prepare for our dinner, I marinated steak tips overnight with Ken's No Sodium sesame ginger marinade.  It's so easy, just put the steak tips in a ziplock bag and pour the marinade to cover the meat.  Put it in the fridge and forget about it until the  next day.

I planned on cooking a couple of pounds and using the leftovers in salads for lunch.  Since the cut of meat is marbled and fatty, it keeps well in the fridge and doesn't dry out as much once reheated.

I sear the meat on high heat to let it crisp up a little then I reduce the heat and put the lid on the grill.  I prefer my red meat medium but the Mo likes it a little more cooked so I leave his on for a couple more minutes.  I only turn the meat ONCE. 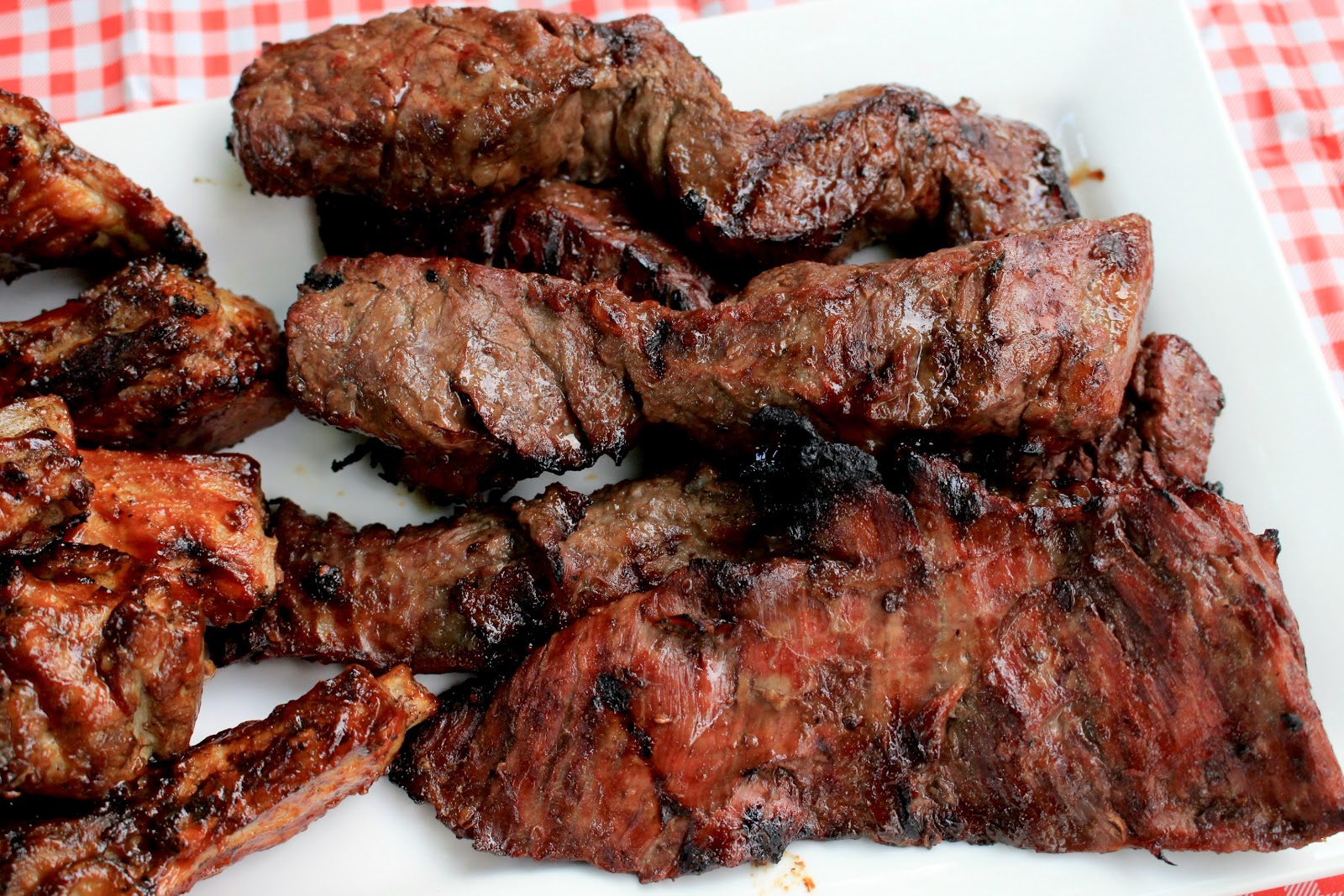 The ribs required a little bit more effort.  I prefer my ribs to be tender and have the meat fall of the bone.  To prepare the ribs, I slow cooked in my slow cooker.  The day before, I placed the cut up ribs in my slow cooker and placed boiling water in it.  I added some BBQ seasoning that I got from my trip to Memphis, onion powder and a couple of bay leaves.  After the meat slow cooked for 3 hours on high heat, I took the ceramic insert and lid and let it cool in the fridge overnight.

When the steak tips was almost done, I removed the ribs from the fridge and water and grilled it for the meat to crisp up.  In a separate mixing bowl, I added Sweet Ray's BBQ sauce with sriracha hot sauce.  Once the ribs were heated and crisp, I brushed the BBQ hot sauce mixture onto the ribs.  It is important to wait until the ribs are ready so the BBQ sauce doesn't burn on the grill and ribs and leave you with inedible meat. 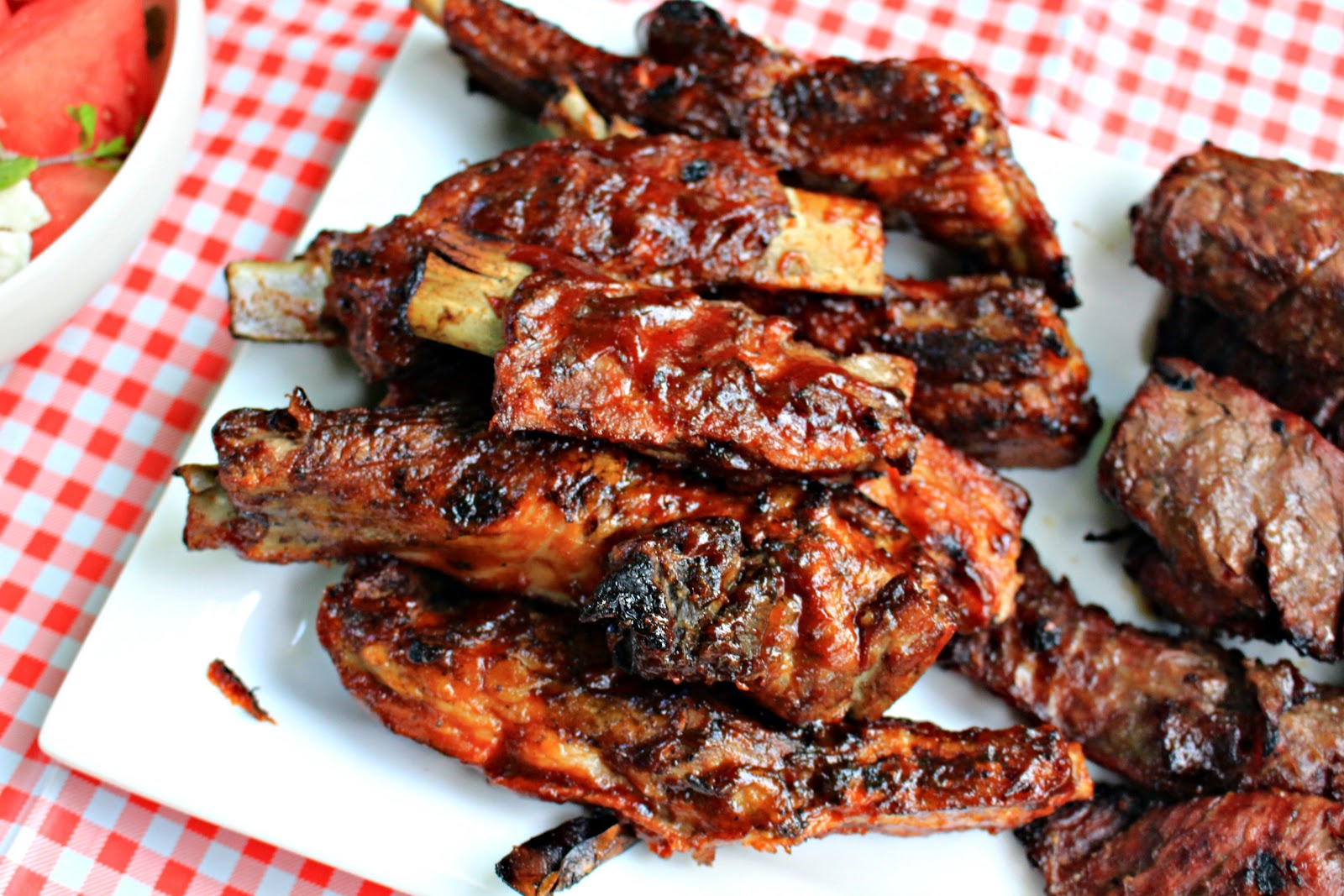 To save time with cooking the corn on the grill, I parboiled the corn in boiling water on the stove for 8 minutes then finished it off on the grill on high heat for a couple more minutes.  Add salt and pepper after it's done.  Butter optional. 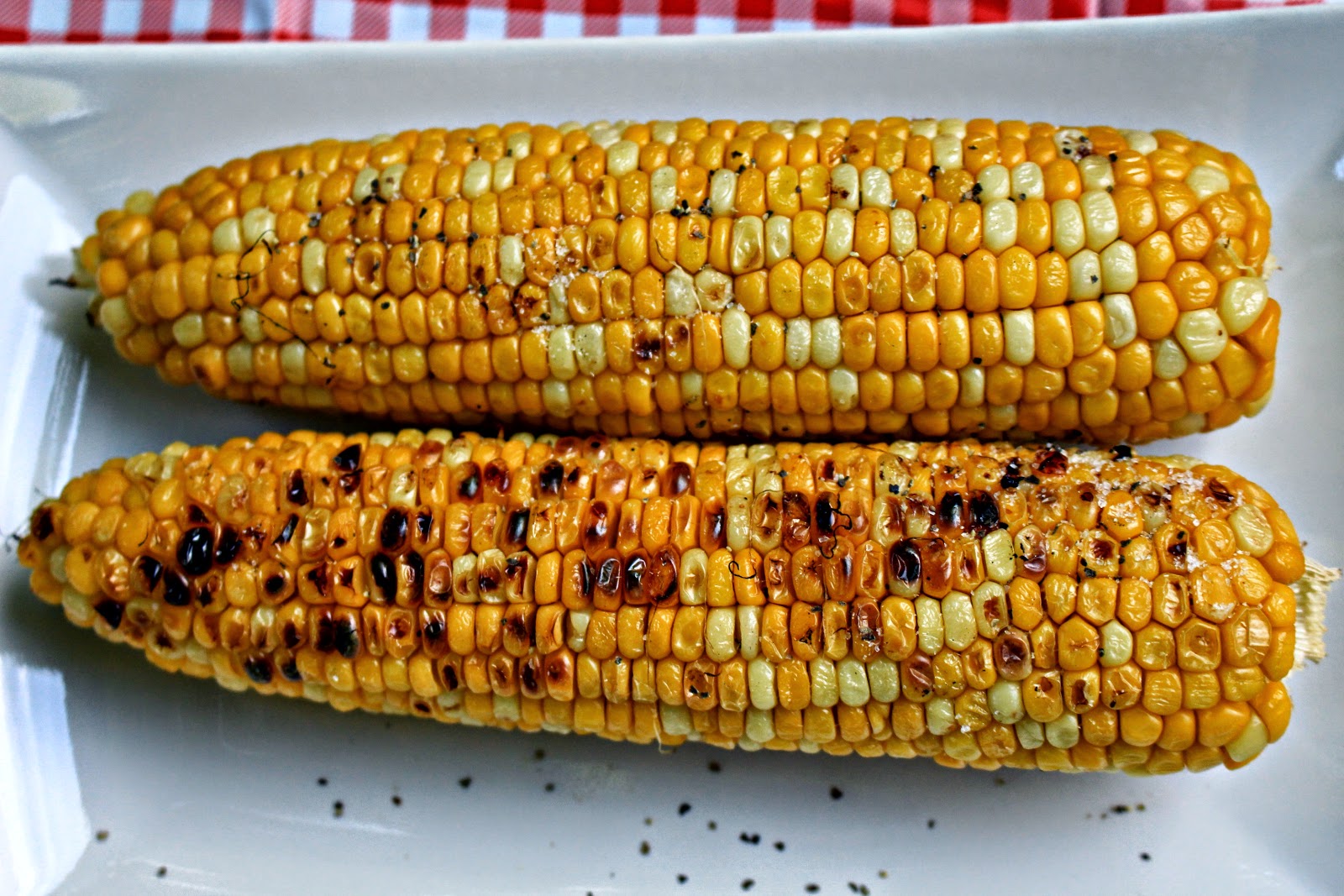 For a side salad, I prepared an easy field greens salad with fresh cut strawberries. I didn't have any goat cheese so I sprinkled some Parmesan cheese instead and served it with balsamic vinaigrette. 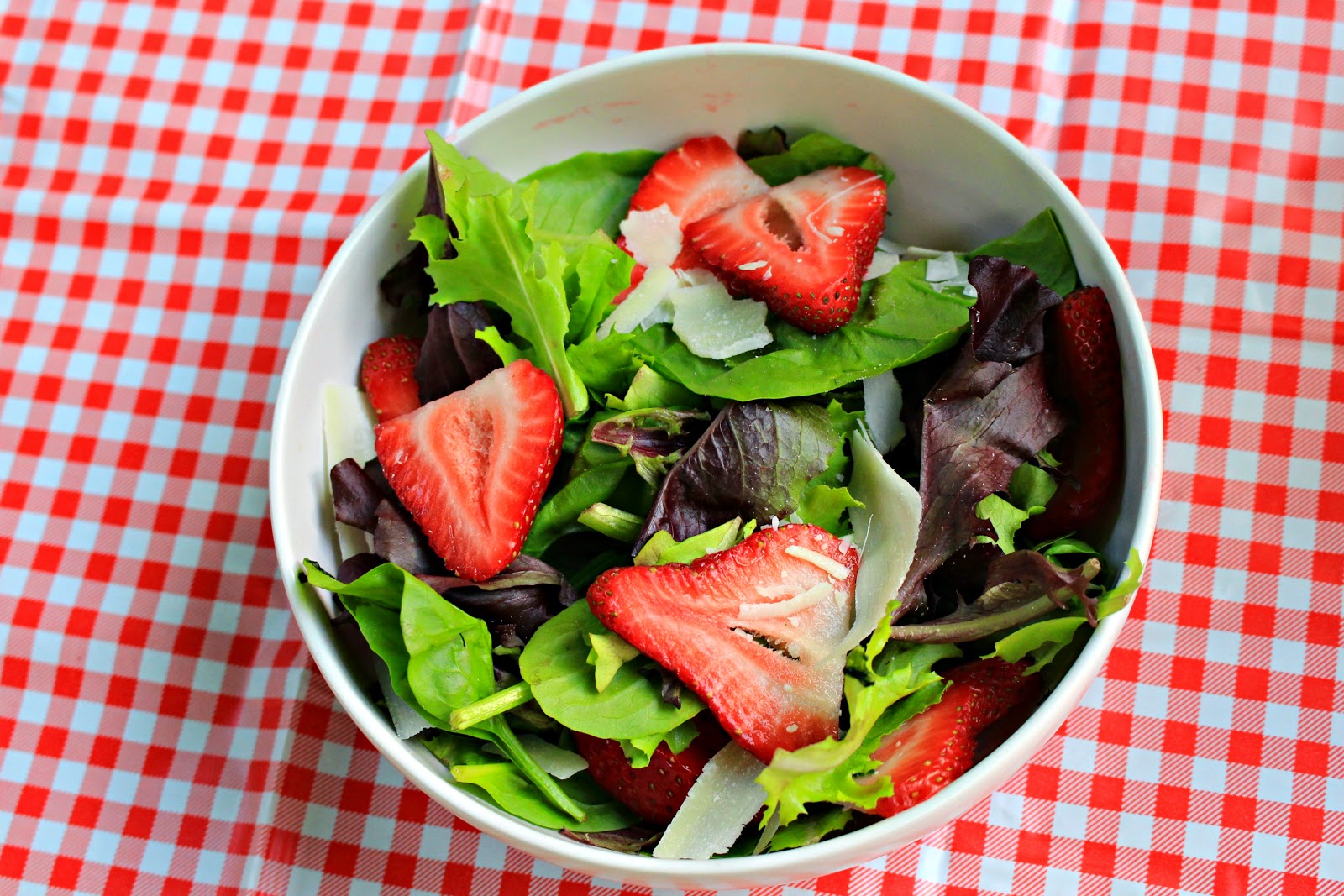 Since I already prepped watermelon for lunch, I portioned some out for dinner and added feta cheese and a few sprigs of spear mint for a cool watermelon salad.  Some people even add balsamic vinegar but I prefer not to. 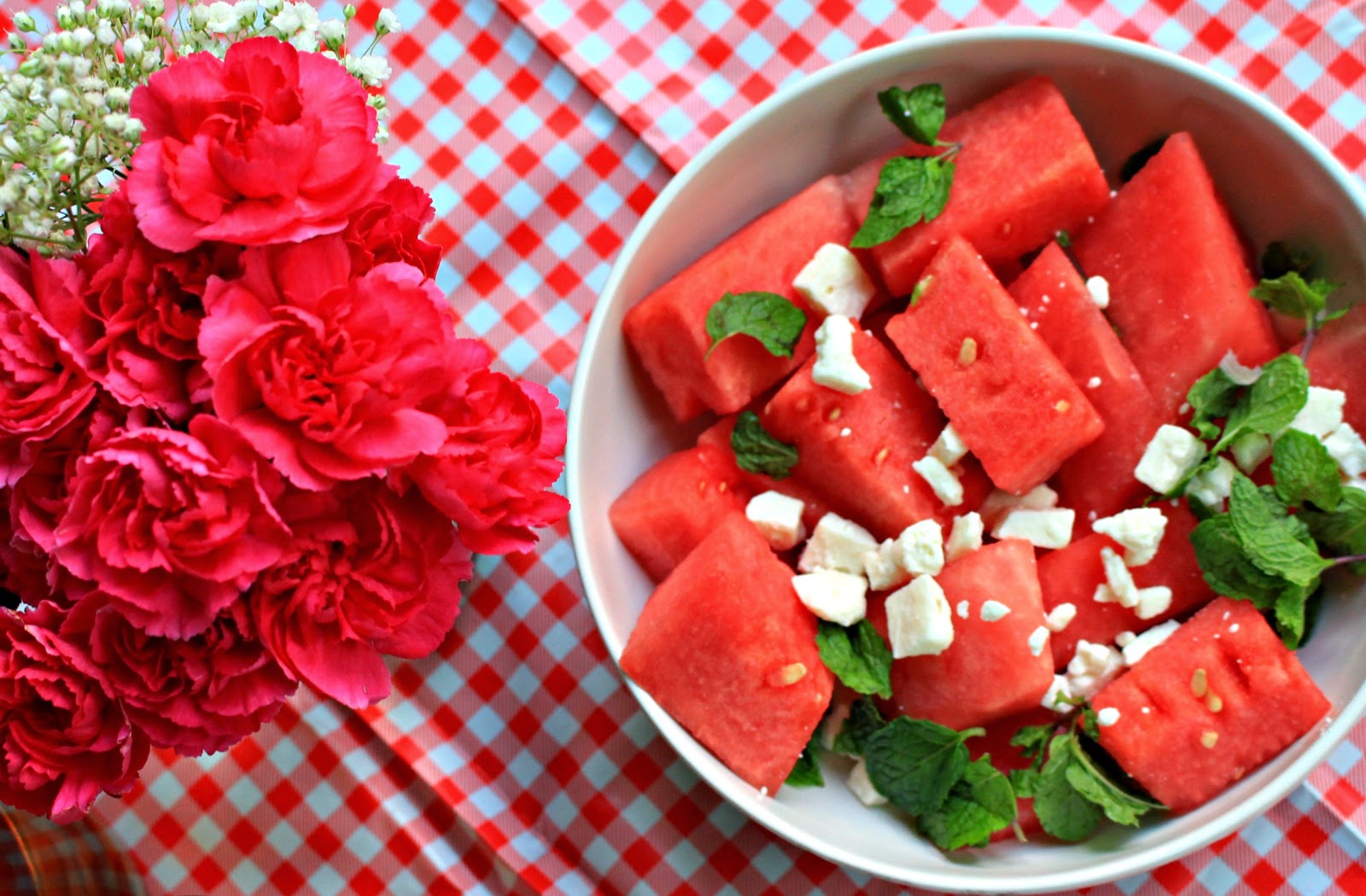 I was such a fan of Sage General Store's home made ginger and mint green tea that I decided to imitate it. I made a batch of green tea using 2 bags the day before.  Once it cooled to room temperature, I added some sliced ginger and green mint and put it in the fridge to cool and let the tea infuse overnight.  I added a packet of Splenda and it was perfect. 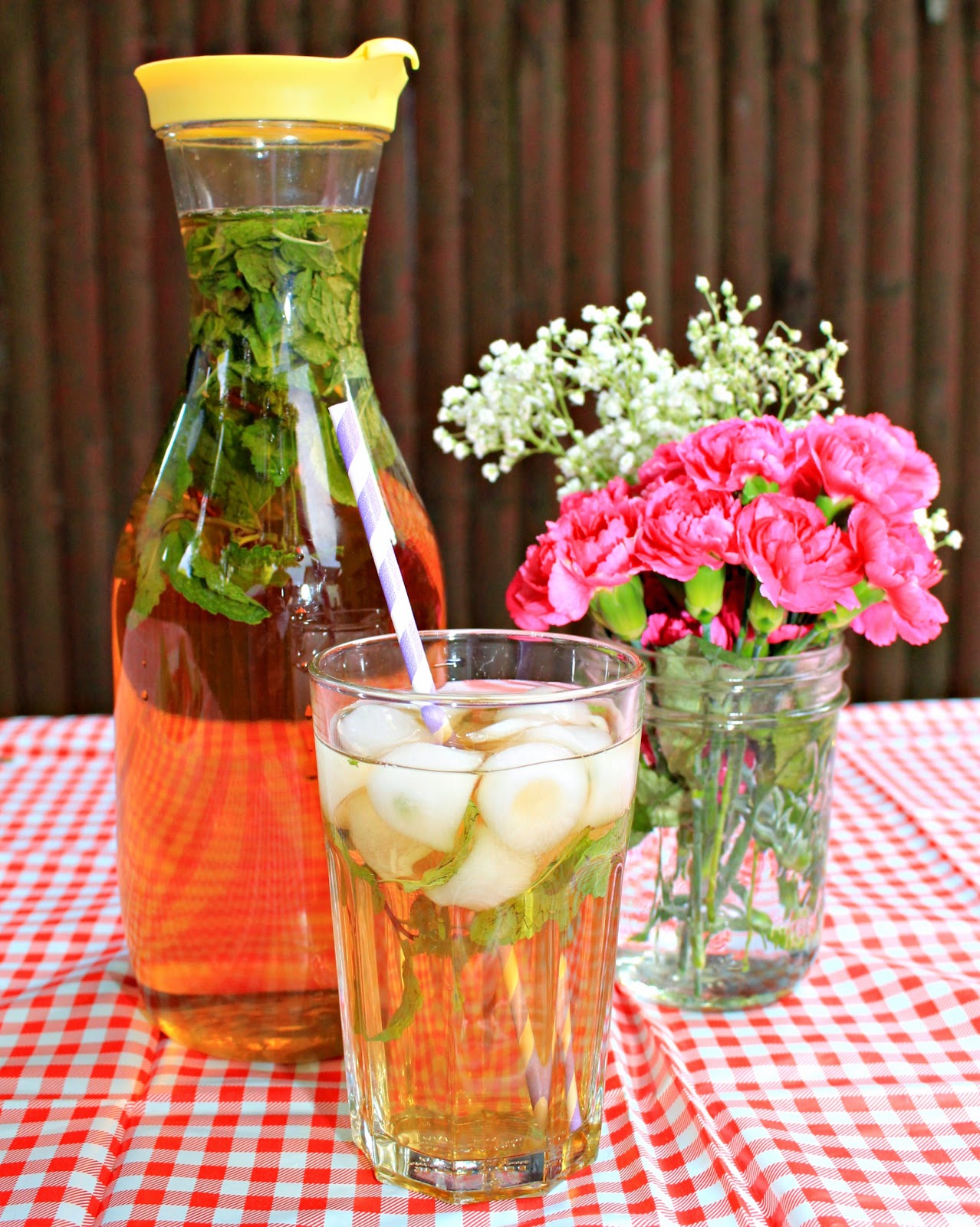 We sat outside on our picnic table and enjoyed our meals as Chewie and Odie patiently waited for us to drop something.  Lucky for them, they both got a few bites of sirloin steak tips. 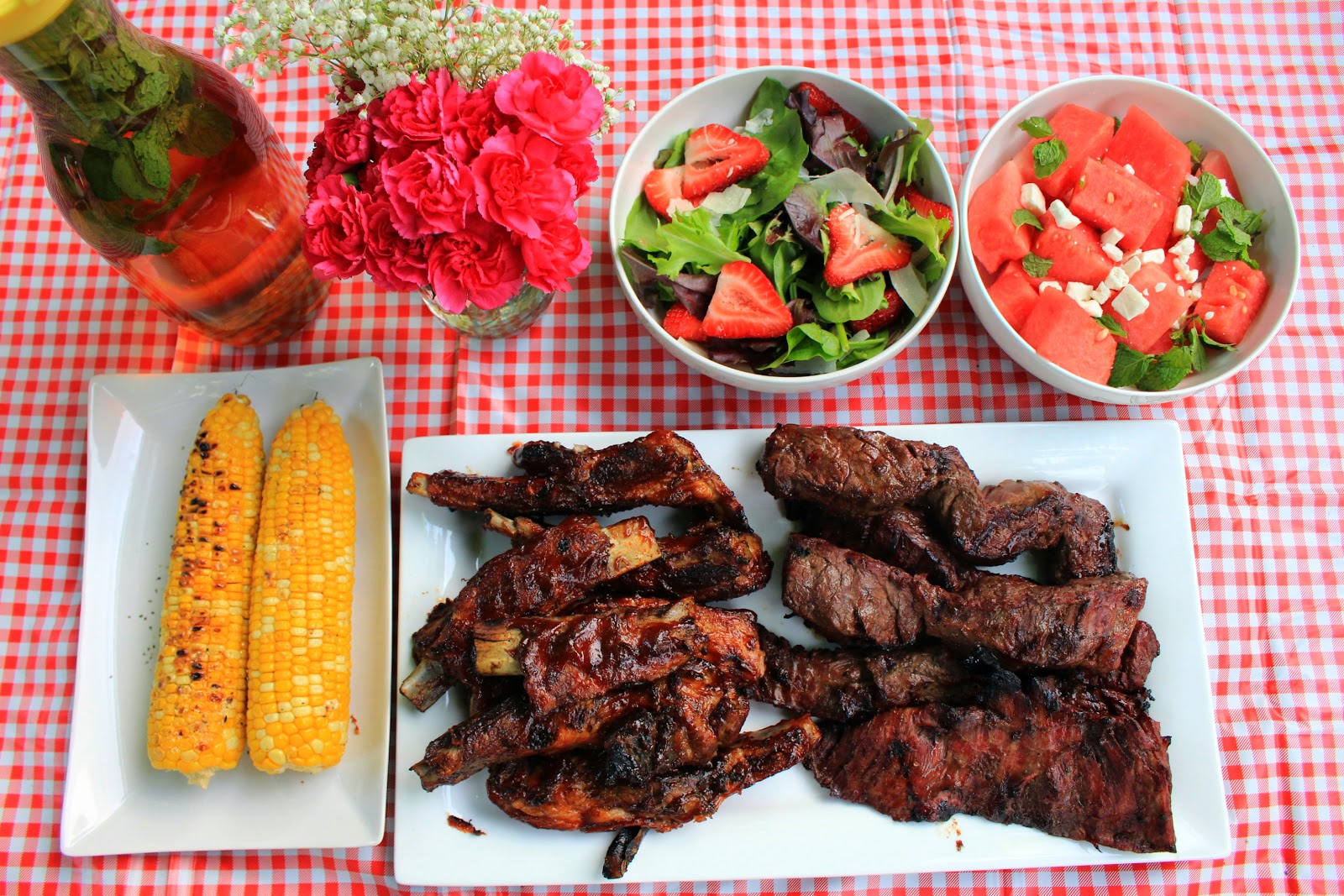