"Yow Hon" also know as Cambodian Hot Pot not to be confused with the clear broth Hot pot  because it happens all the time...

(Quick story: my friend invited us out for Hot Pot and we assumed the spicy version but she ordered the clear broth instead.. we were a bit disappointed because we had our hearts and stomach set on the hearty spice version so now we always clarify which version they are referring to)

Anyhow, "Yow Hon" is a family staple for special occasions and gatherings for Cambodian families.  The broth is not intended for one with a limited palate.  It boasts many flavors that are acquired by the regulars ranging from pungent shrimp paste, Taiwanese BBQ sauce, soybean paste and a variety of chili.

Although the delicacy is a long tradition among Cambodians, other Asian nationalities have their own "hot pot" traditions with different bases for the sauces and brother.  For instance, the Japanese eateries in Boston are popular hot spots for "Shabu-Shabu" or "Sukiyaki"  where patrons cook their ingredients table-side.  Those restaurants offer a variety of broths ranging from simple miso base to a Thai inspired "Yom Yum" soup broth.

I also met a Burmese woman who told me that the hot pot tradition was also a favorite among her people.  She advised that although the cooking tradition was similar, their broth tasted different and coconut milk wasn't used.

It doesn't take different nationalities to compare brother, each Cambodian family makes the sauce different and chooses different meats, seafood and vegetables per their own traditions or preferences. Some families prefer it spicy and some likes it sweet, we prefer it sweet and sour.

Below is based on how my family makes hot pot again.. the recipe ranges greatly and there is no actual "firm" recipe as the typical Cambodian cook tends to "taste" and add ingredients as they go.. this is the best of my knowledge for my sister, Sophak's recipe that I got from her a few days ago. I am cutting her recipe in half as this is a "For Two" recipe

Ingredients for broth
1/2 can of Taiwanese BBQ Sauce
1/2 bottle of dark beer (Heineken or similar . usually the Mo drinks the other half)
2 tablespoons of chunky peanut butter
2 tablespoons of ground roasted peanuts
Fish sauce to taste (one dash)
Half a can of crushed pineapple
1 can of coconut milk
2 tablespoons of vinegar or optional lime
Sugar, salt, optional MSG to taste
2 Cans of water (I've seen people use coconut soda or pineapple soda instead)
2 tablespoons of chicken soup broth powder bouillon
1 tablespoon of finely ground Asian Chili powder

Add all ingredients in a large sauce pan and let it simmer.  Taste the broth to see if if requires sugar, salt or MSG.  I know this is difficult to do as a "rookie" but if its bland, add a pinch of salt or MSG, if its too salty, add some water, beer or coconut soda.  You will become a pro in no time.  Set the sauce on the back burner and set aside.

Tip: I prefer to precook my meatballs and quail eggs and let it cook in the broth and simmer before serving.
The most common issue with preparing this sauce is making it too thin.  If the sauce is too thin, the vegetables and meat will not have any flavor after you remove it from the broth.  The sauce will fall right back into the pot.  To prevent this, I've seen people go as far as to cook and puree meat and add it to the broth for flavor and texture.  If you don't want to do that, you can use a little more coconut milk and add peanuts.

Vegetables for Cooking
Again, each family has their own taste and preferences. I was recently introduced to new  mushrooms and root vegetables that I would have never thought on my own.  The most common green vegetable is watercress, which is known to be a great digestive aid and maybe helpful in assisting with the digestion of this heavy meal that includes large amounts of hard to digest protein.


Protein Options for Cooking
There is such a great range for protein options that its hard to list them all.  Some of the familiar choices included shrimp, beef and quail eggs. I've seen people use raw chicken (not recommended) and ox tail, which requires parboiling.  Many families love cow stomach but the Mo and I beg to differ.

Preferred Protein Basics
The above is what we like to eat, the list below is optional:
Starch Options

The traditional way of eating this dish is served with white Jasmine rice.  Along the years, "Banh Hoi" or rice vermicelli has become increasingly popular and the main choice.  Some people like them both and eat both at one sitting.  Some families even opt for other rice noodle options as "Chow food", Chinese yellow noodles or Japanese udon noodles.  I'll like mine with rice vermicelli. 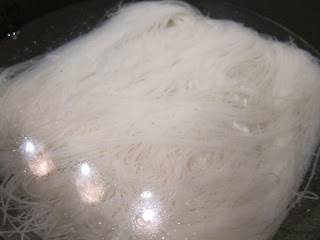 Optional Dipping Sauce
Up until last week, I use to eat the dish with a pre-made bottled soy bean sauce.  My friend Nat, made us a similar Korean version using soy bean paste, chili paste and a bit of sesame oil. I will never go back to my old bottled sauce again.
Serving instruments

Hot pot: There are a great number of hotpots on the market ranging from cheap to expensive.  The traditional hot pot uses charcoal and newer ones uses propane and others are electrical.  We use our electric square skillet.

Soup Ladle: This comes in handy when someone's noodles are lacking broth and they want to put an extra scoop of broth for additional flavor.

Tongs: This comes in handy when someone doesn't want to get their hands messy touching raw meat and wants to put a large amount of meats or there are large amounts of cooked food to be removed. 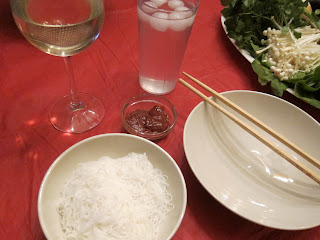 Directions:
Once the sauce is poured in the hot pot and it boils, it is ready to be served.  Pass along plates of rice or vermicelli as one or two people can help add in the protein and vegetables.  The aroma of the sauce will surely make the excite the crowd and make them salivate.

Throw in the meats and vegetables in and remove them as they cook. Allow additional cooking time for raw meats but vegetables are fine after a quick blanching. 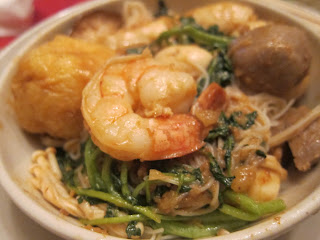 It's common courtesy to add in additional raw ingredients after you remove cooked ones for your own plate.