The Bancroft Steakhouse on 3rd Ave. in Burlington

" The Bancroft is the Webber Restaurant Group’s take on what a modern high-end steakhouse should be."


I was so excited to hear that there was a new steakhouse coming to Burlington.  I couldn't be more thrilled that there would be another choice for fine dining in addition to the Capital Grille and Strega Prime.  The restaurant opened its doors to the public memorial day and we made reservations for the following day.  The menu wasn't posted but I was able to receive the menu via email. 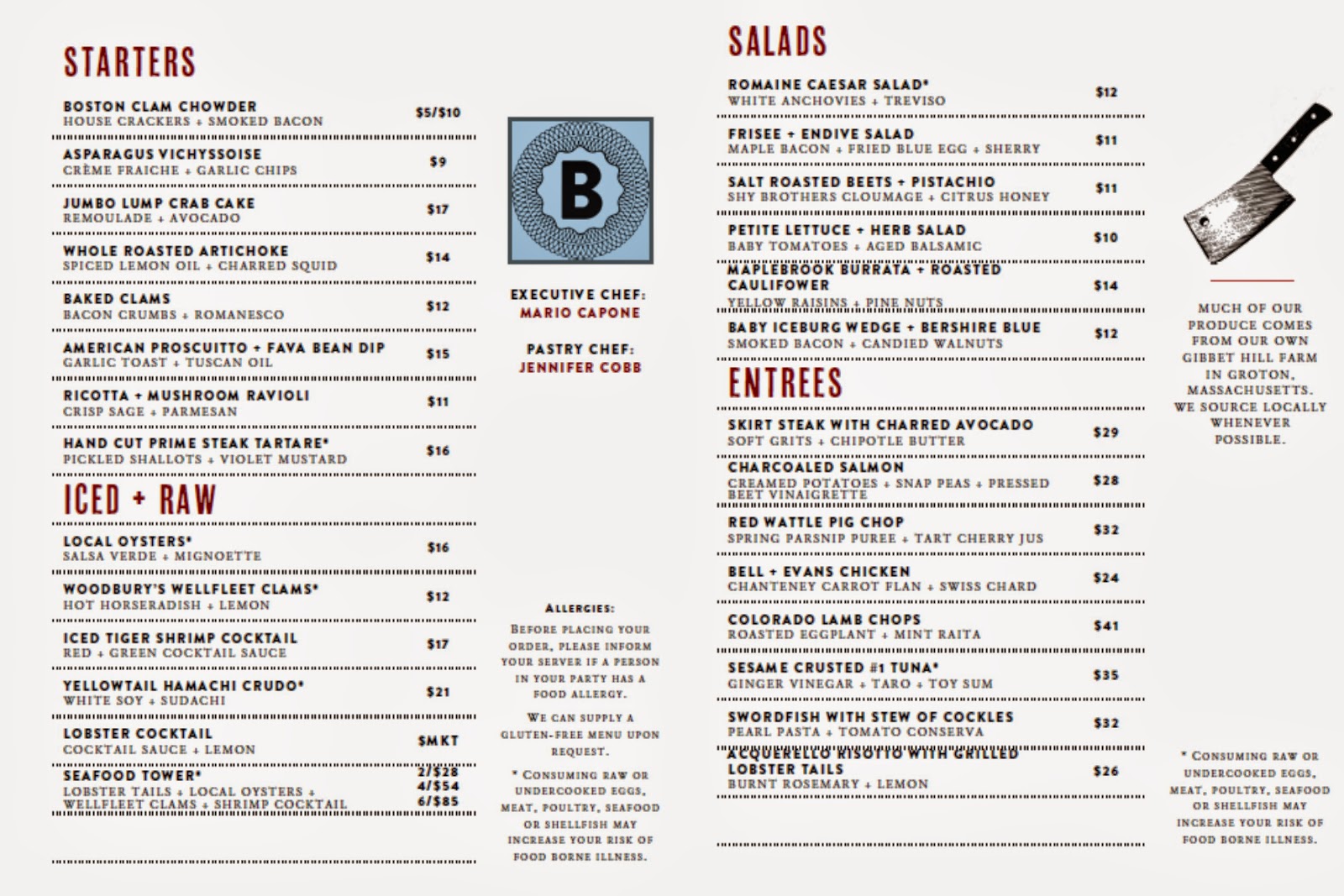 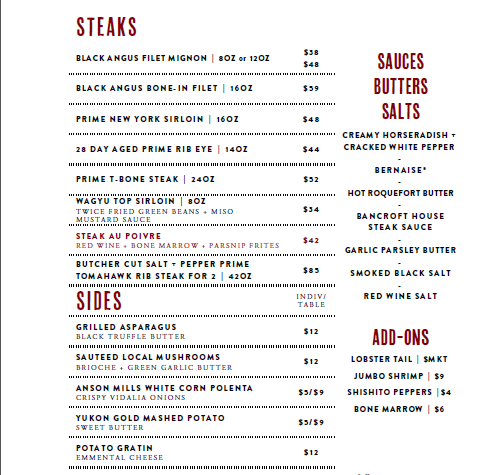 The restaurant is among one of the first business in the 3rd Ave. development to open.  There will also be a highly anticipated Wegman's Food market and King's Bowling and Entertainment center along with other shops.

The Bancroft Steakhouse is part of the Webber Restaurant Group and focuses on farming and conservation.  Most of the produced used is grown locally in their farm in Groton, Massachusetts. 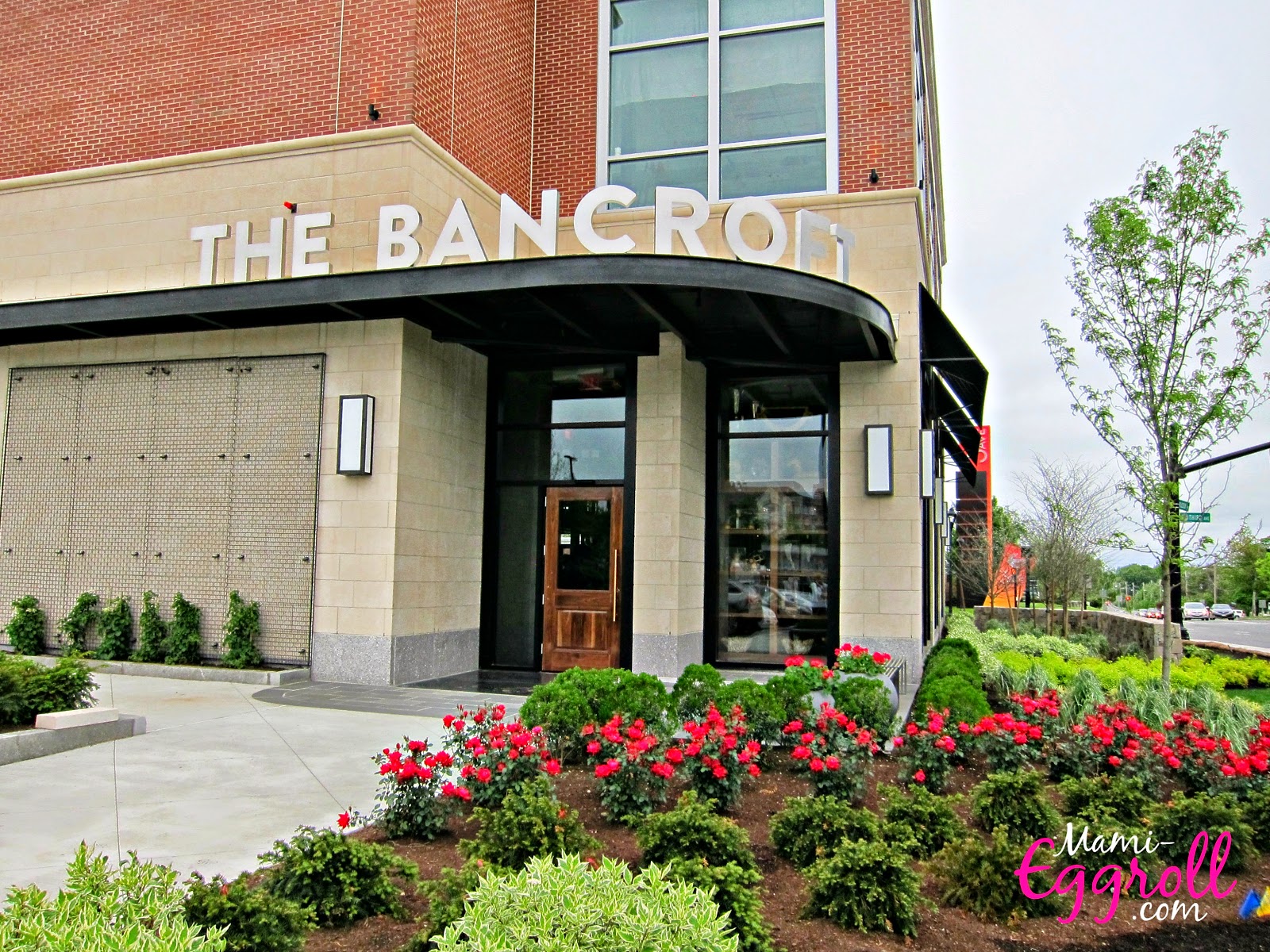 We arrived at The Bancroft Steakhouse just before 6 PM and were greeted by the friendly staff.  The decor of the restaurant was fun and hip with a cool urban vibe. 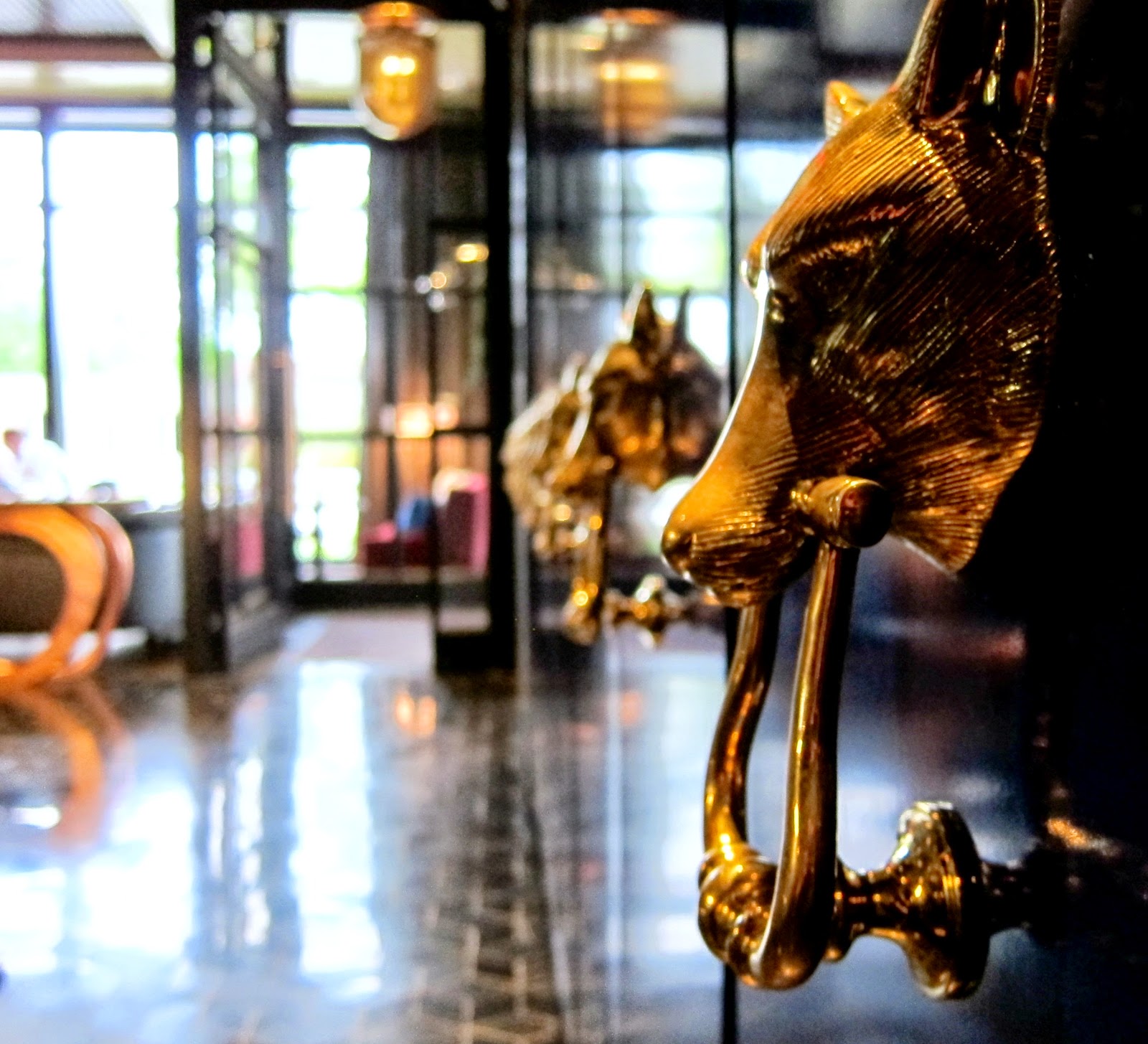 We sat at the bar as we waited for the rest of our party to arrive. 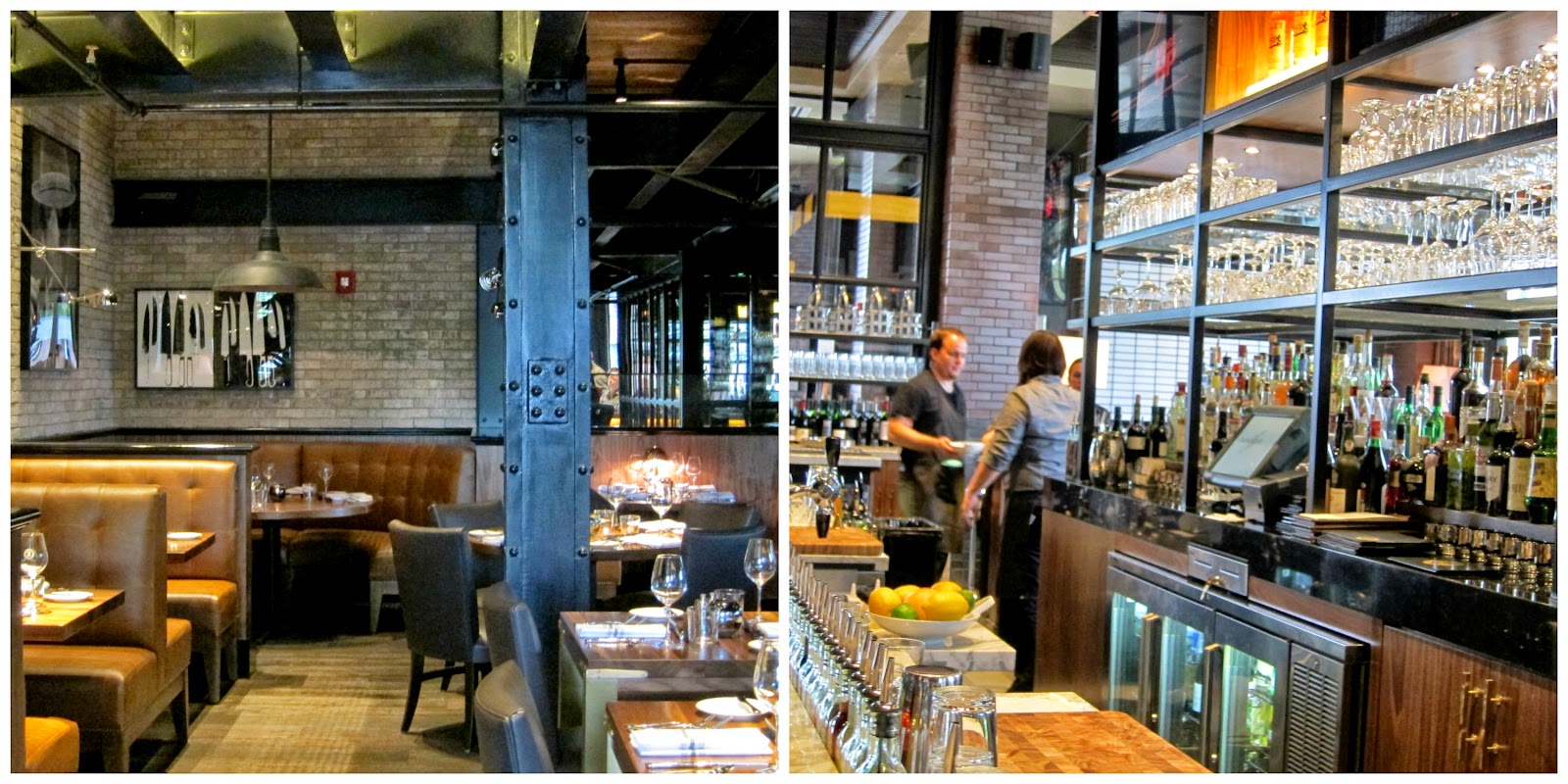 It was cool to see the bar stations where the bartenders create their masterpieces.  There were fresh garnishes and 20 bottles of different bitters.  I was very impressed! 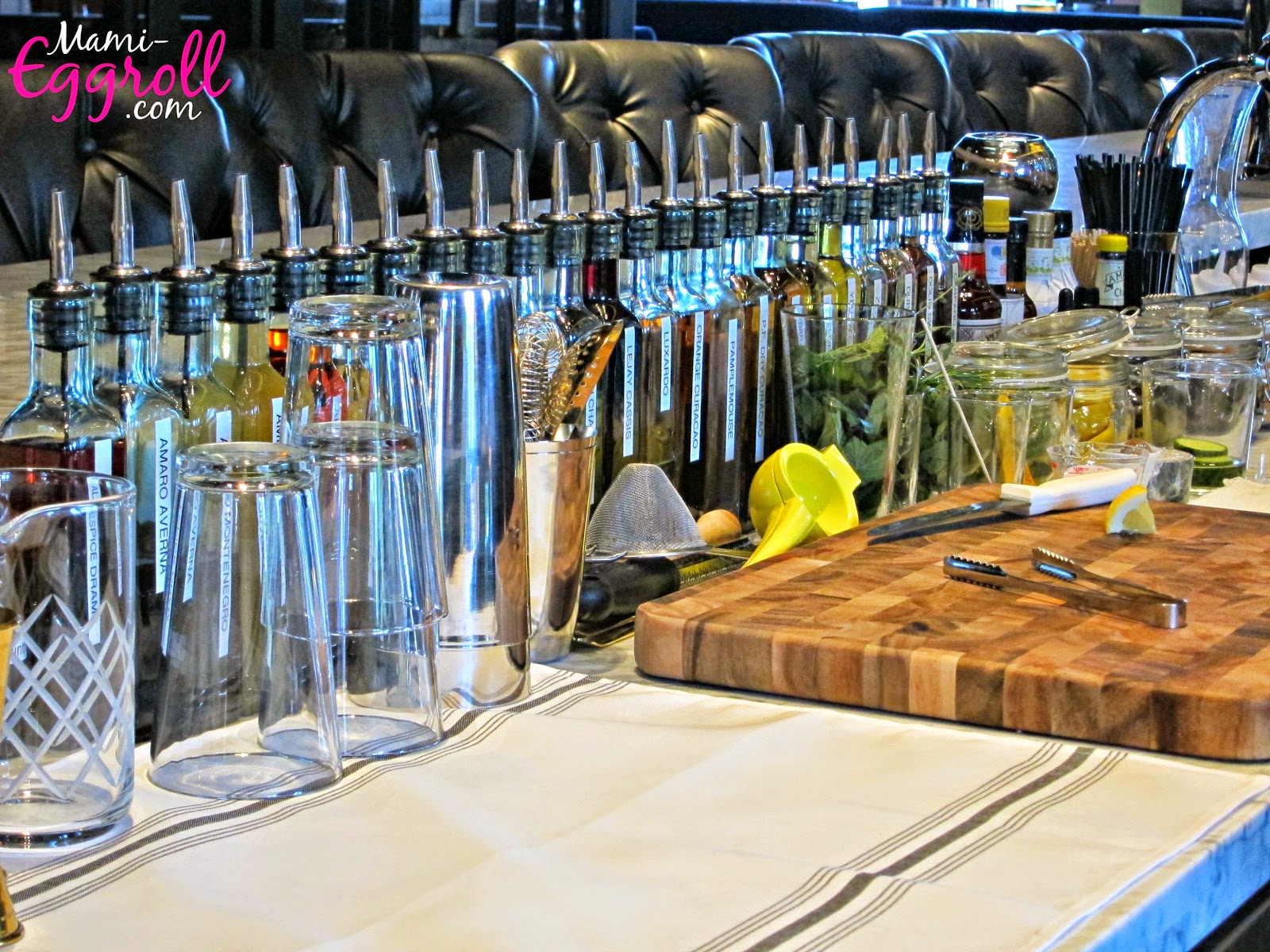 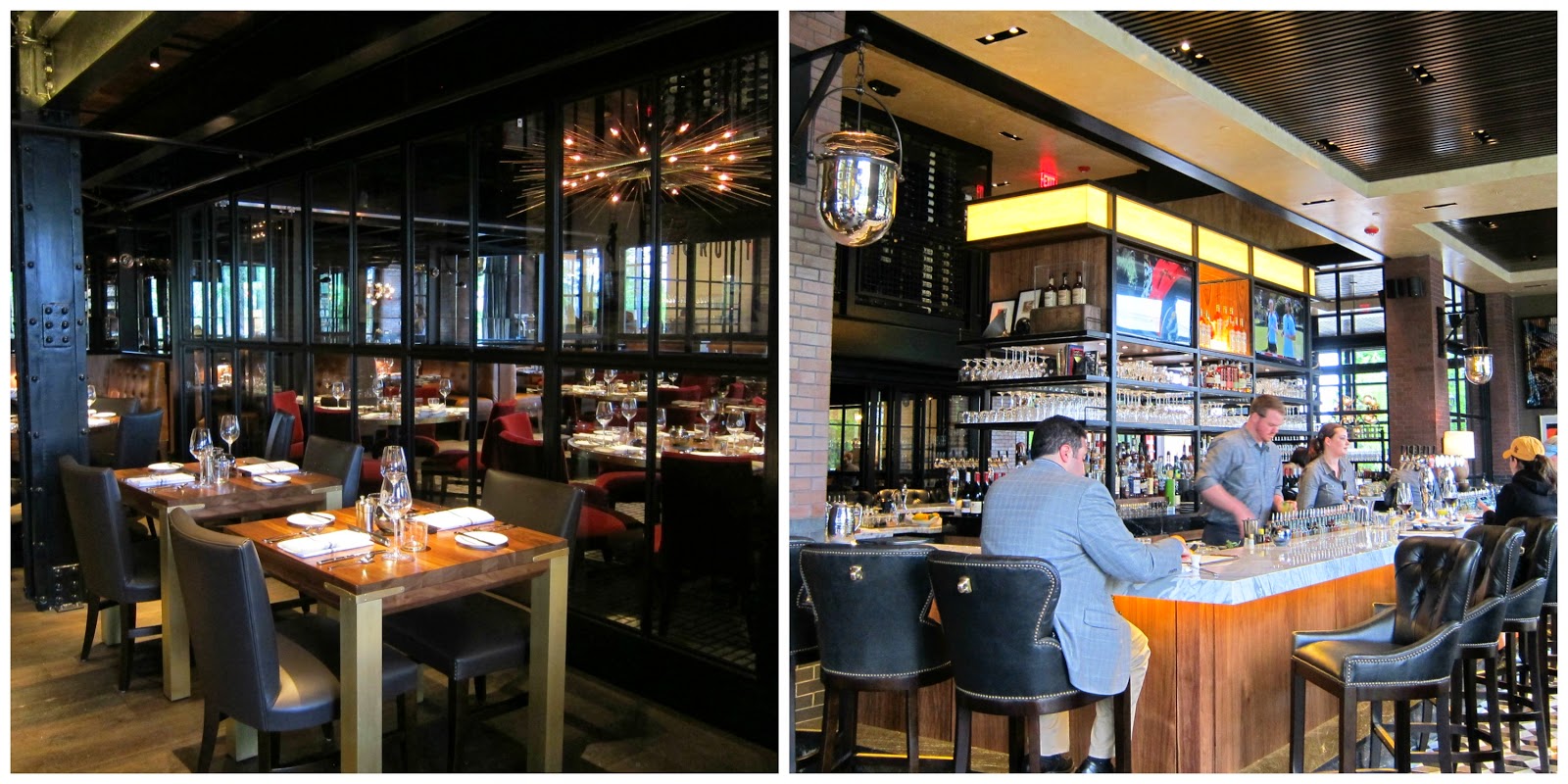 The popular drink of the night seemed to be the blood orange sangria topped with champagne. 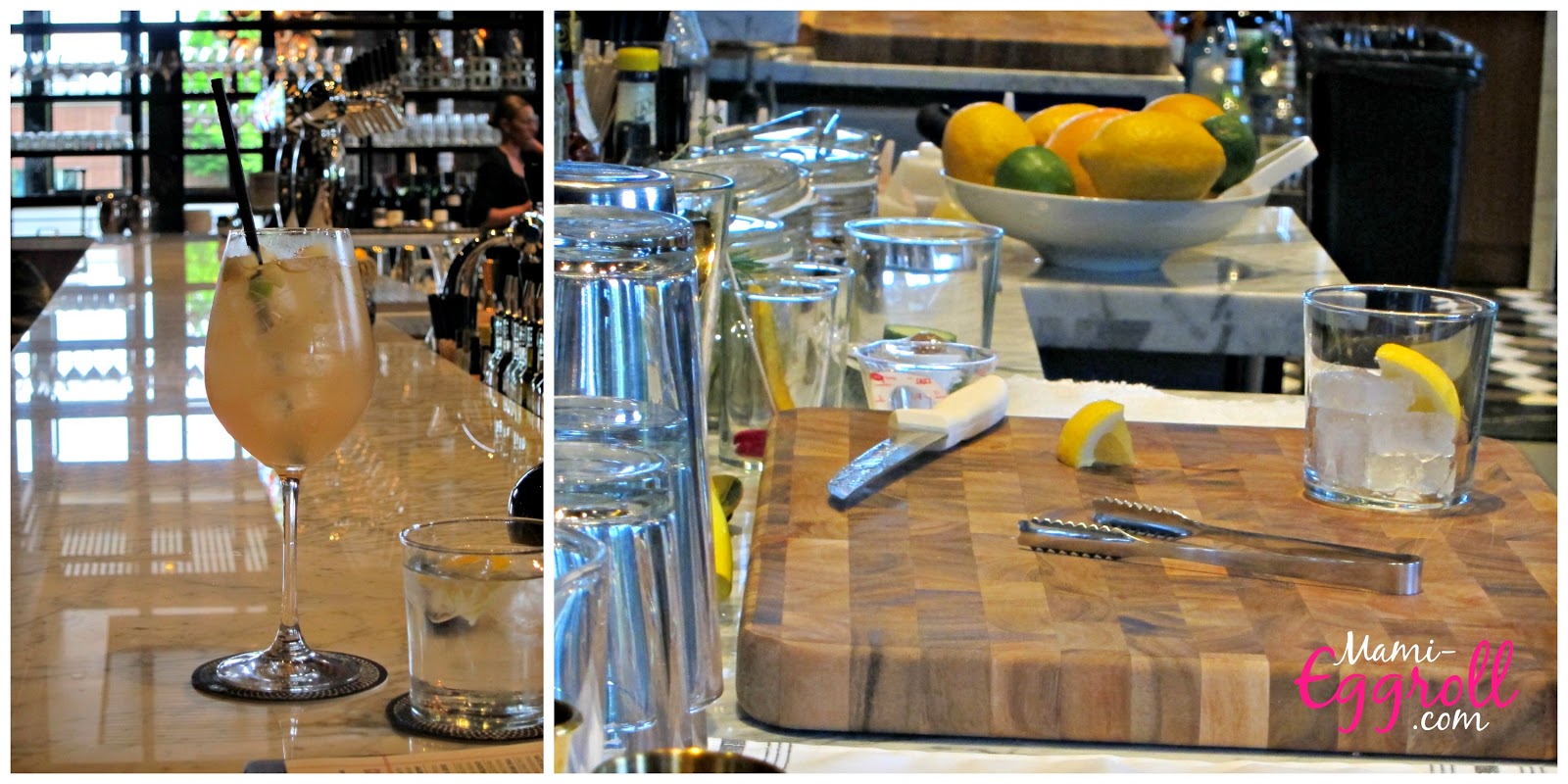 The restaurant was still empty so I was able to walk around and snap a few pictures of the different dining areas.  There is a backroom that can host up to 50 people for a sit down area meal and also an upstairs area that can accommodate 50 people for a reception or 25 people for dinner.  There were also areas with comfortable chairs and couches for a more casual lounge atmosphere. 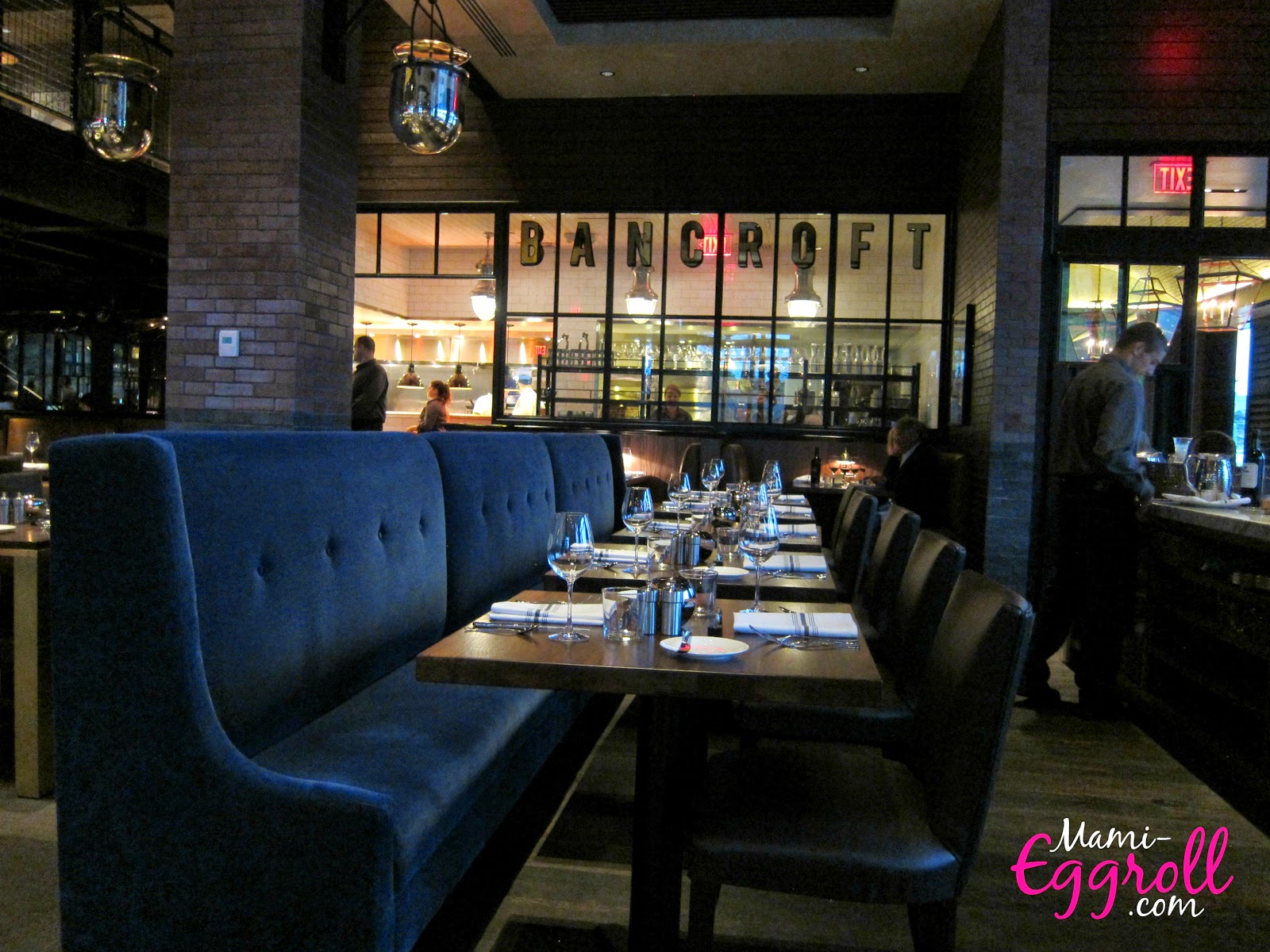 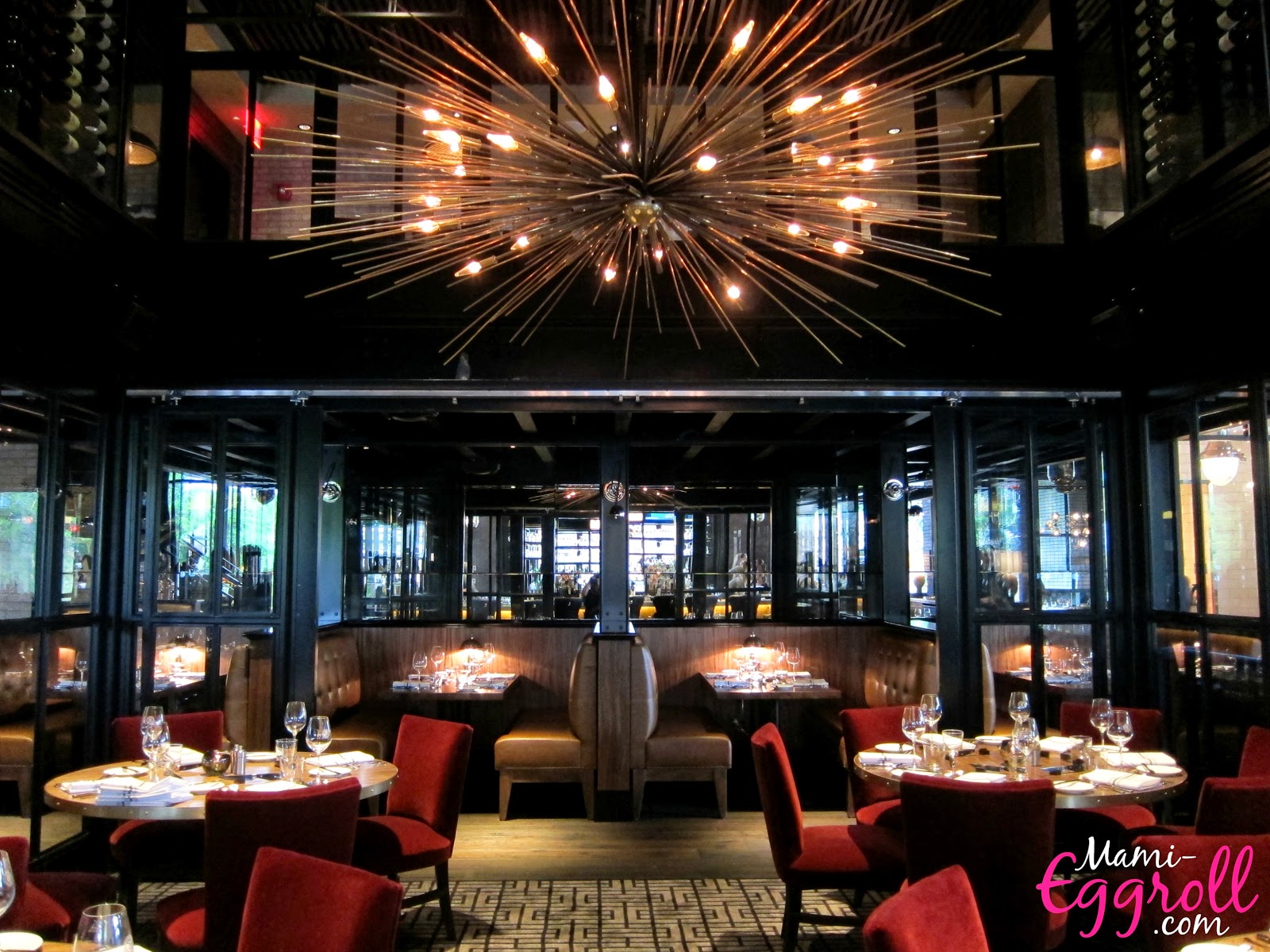 Since it was opening week, we were able to reserve a semi-private area without any minimum requirement. 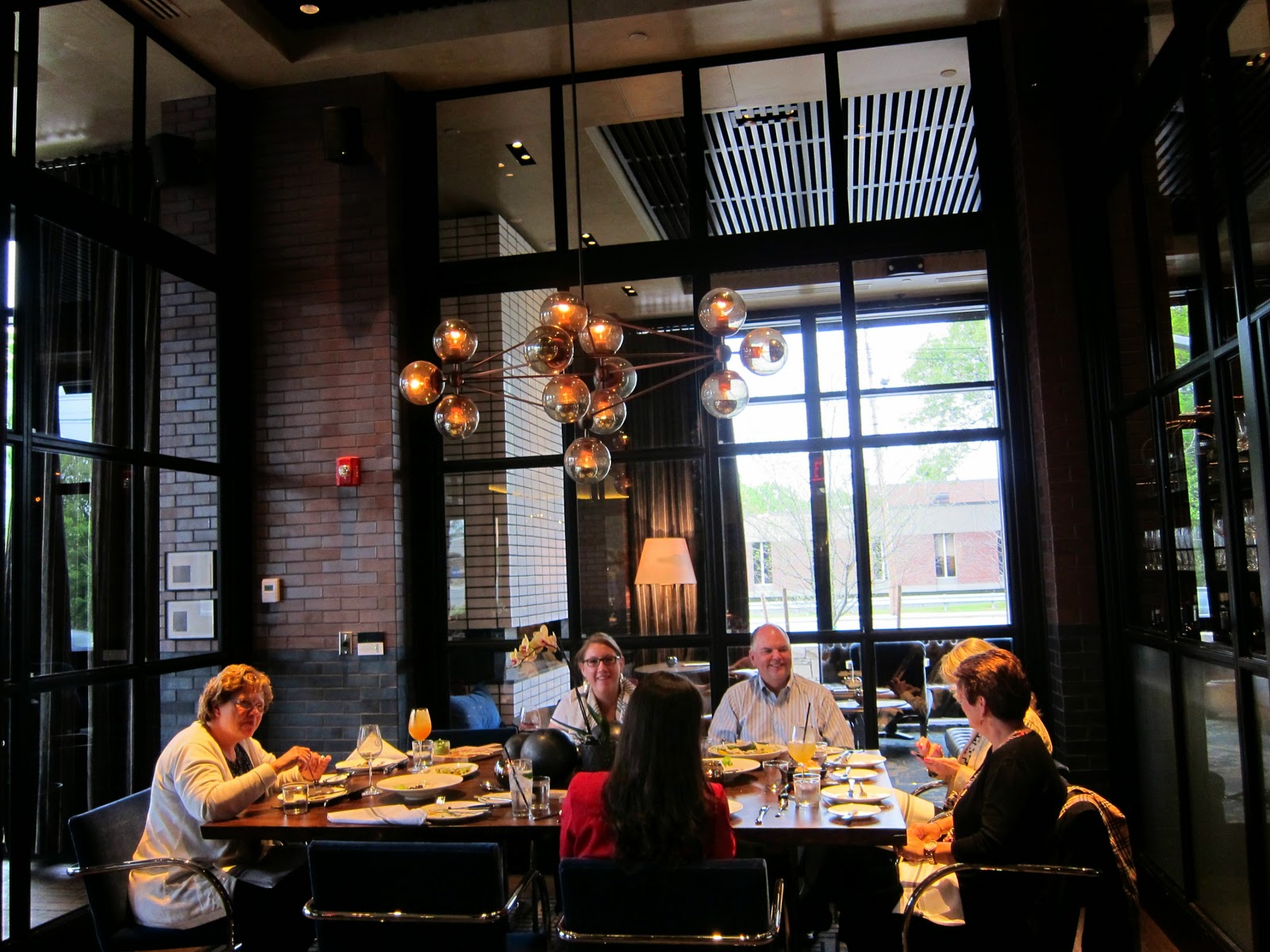 Fresh hot rolls served in a cast iron dish were brought to our table with creamy butter on the side. 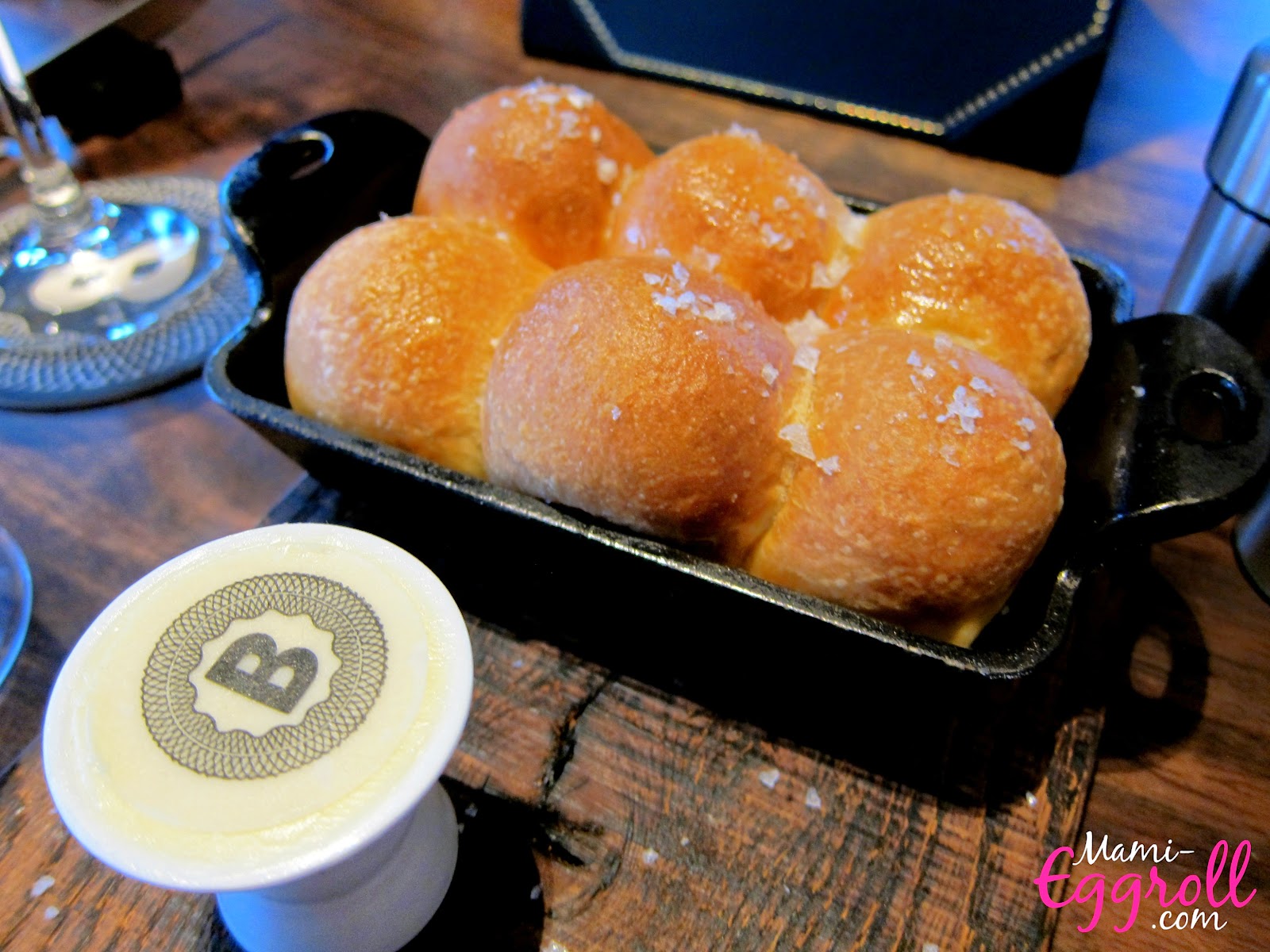 We started off with a few different starters.  Jill and I both love oysters so we split an order of the Local oyster platter with salsa verde and mignoette.

My favorite appetizer was the whole roasted artichoke with spiced lemon oil and charred squid.  I was a little disappointed that they didn't offer calamari but that distinguishes them from the other high end steakhouses.  Although the squid was not the main feature, it was perfectly grilled and tender.  It was the best grilled squid that I've ever had, better than the ones in Asia.

We got a couple more starters to share.  I liked the prosciutto and bean dip but I could have done without the ricotta and mushroom ravioli.  The consistency of the filling reminded me of pate.

The Jill and I split a couple entrees for dinner.  Being at a steakhouse, I had to try a steak entree and use their customized steak knife.

I got the 16 oz. black angus bone in filet that was served with a cow shaped corn polenta.  Each steak entree came with a sauce or butter and I went with the bernaise.  The steak was juicy and grilled perfectly.  I got the shishito pepper "add-on" for an additional $ 4.00.

Jill got the sesame crusted tuna.  It was absolutely my favorite dish at the restaurant.  Typically I wouldn't order fish at a steakhouse but I think I will order it the next time I am there.  The sesame added a perfect texture to the soft sushi grade fish.

A couple of other people at our table got the Bell and Evan chicken with swiss chard and carrot flan.  When the dish first arrived, no one knew what the carrot flan was, one person said it had the texture of mousse.

Some people got the regular 8 oz filet with the Bancroft house steak sauce and raved about it as well. One person for the Colorado lamb chops and it looked amazing!

Everyone LOVED their entrees! That was the first time that there was a unanimous vote of approval.

Similar to other high end steakhouses, sides were ordered for the table to share.  The grilled asparagus was good, the Yukon gold mash potato was OK but the creamed spinach was awesome!  The declious vegetable side dish was topped off with a sunny side up egg.

I loved that the later two was served in individual All-Clad bake ware. 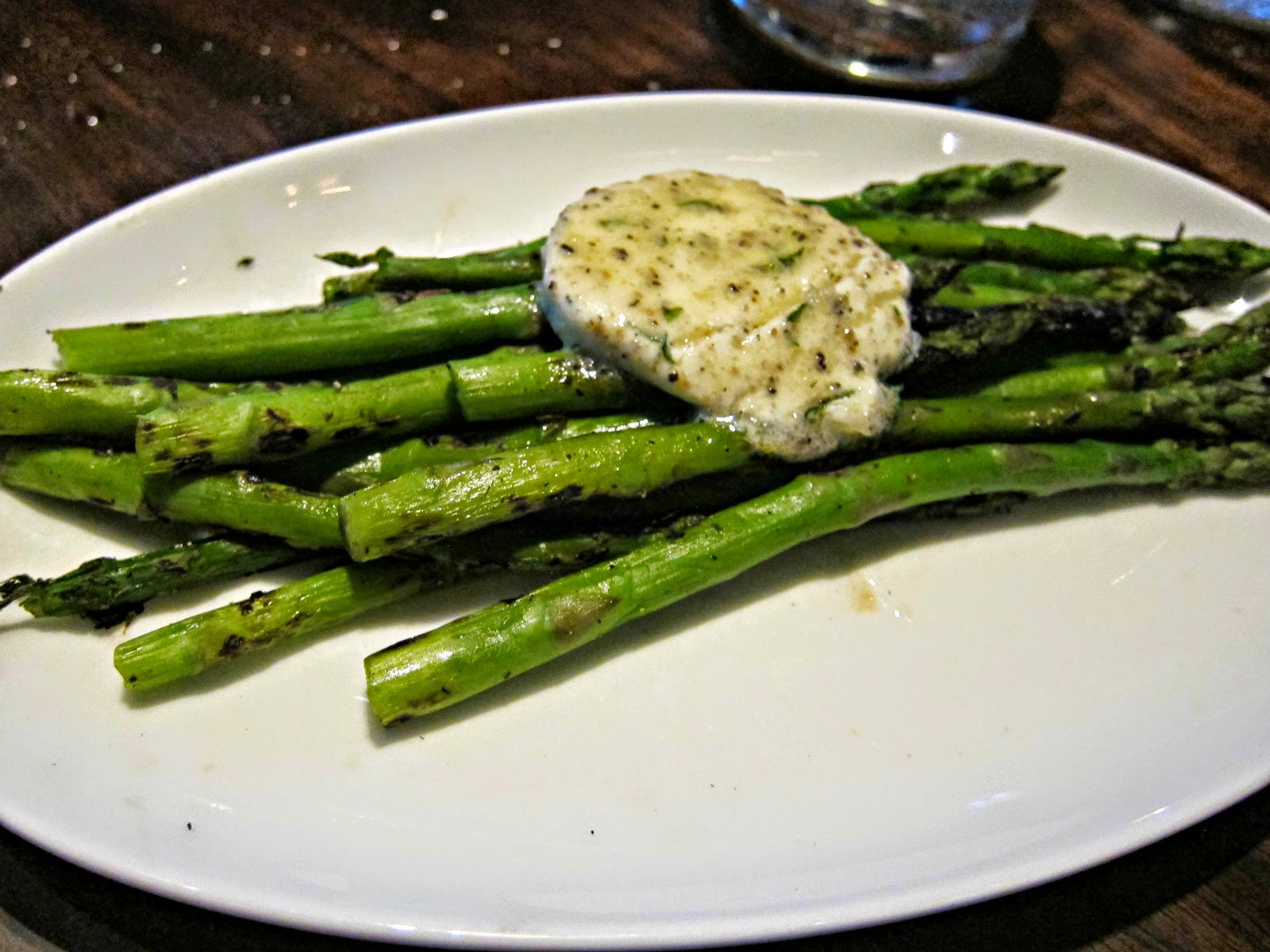 The rosemary french fries looked appealing so we gave it a try.  They tasted like regular fries topped with a rosemary garnish.  I was expecting hand cut fries with more peel on the potato.

We ordered some after dinner drinks; some of us got digestifs and the rest of us got espressos and coffee.  We were stuffed but had to try their dessert.  I was not impressed with their offerings.  The carrot cake sounded promising so we gave that a try.  Although the ginger ice cream was delicious, the sorbet and the carrot cake itself left much to be desired.


The "Chocolate Four ways" dessert was also underwhelming.  It was just OK.  Again, the ice cream was the best part.

I will definitely be back again with my husband, my friends and probably be back with my work people.  The food was great and the service was absolutely amazing.  Kudos to Chef Mario Copone for an innovative flavorful menu!

I think the prices was a little bit on the pricey side but in line with many other high end steak houses.  I can't wait to see their lunch menu and hope they will offer an affordable prix fixe menu.

I typically don't post bathroom pics but I thought it had a cool Victorian chic feeling to it. 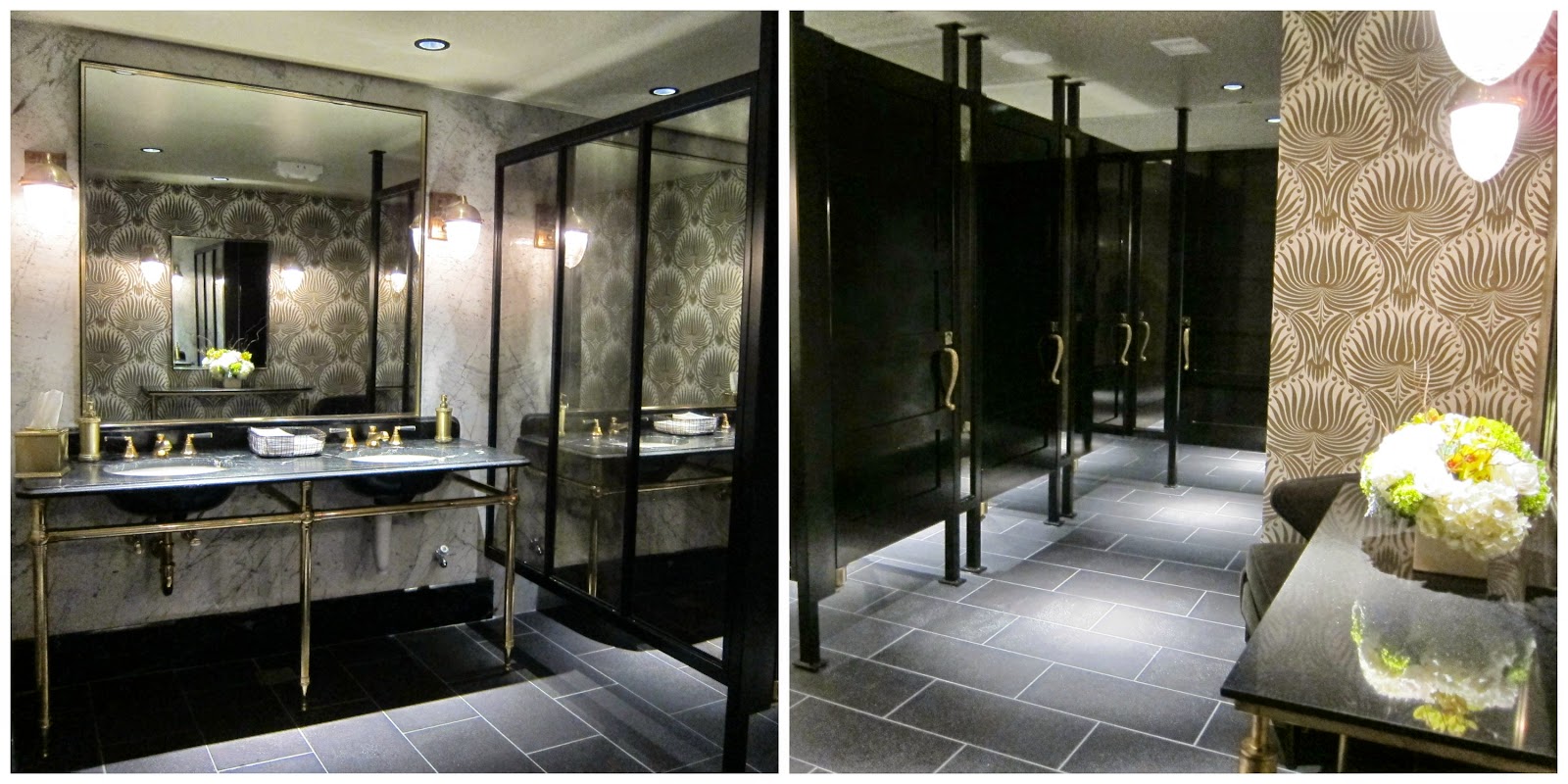