In my book... the best ending to a great weekend...is a great meal with good company; we sure had both over an amazing bacon loaded brunch at Sage General Store  in Long Island City.

The birthday girl, Christine, found the old fashion eatery from the "Funky Finds" episode of Diner's, Drive-ins and Dives.  Conveniently for us, the restaurant was only a short 2 minute drive from where we stayed at Z Hotel NYC.  We found ample street parking on the main road and closed our eyes as we darted across the street helping each other jump over the dividers. 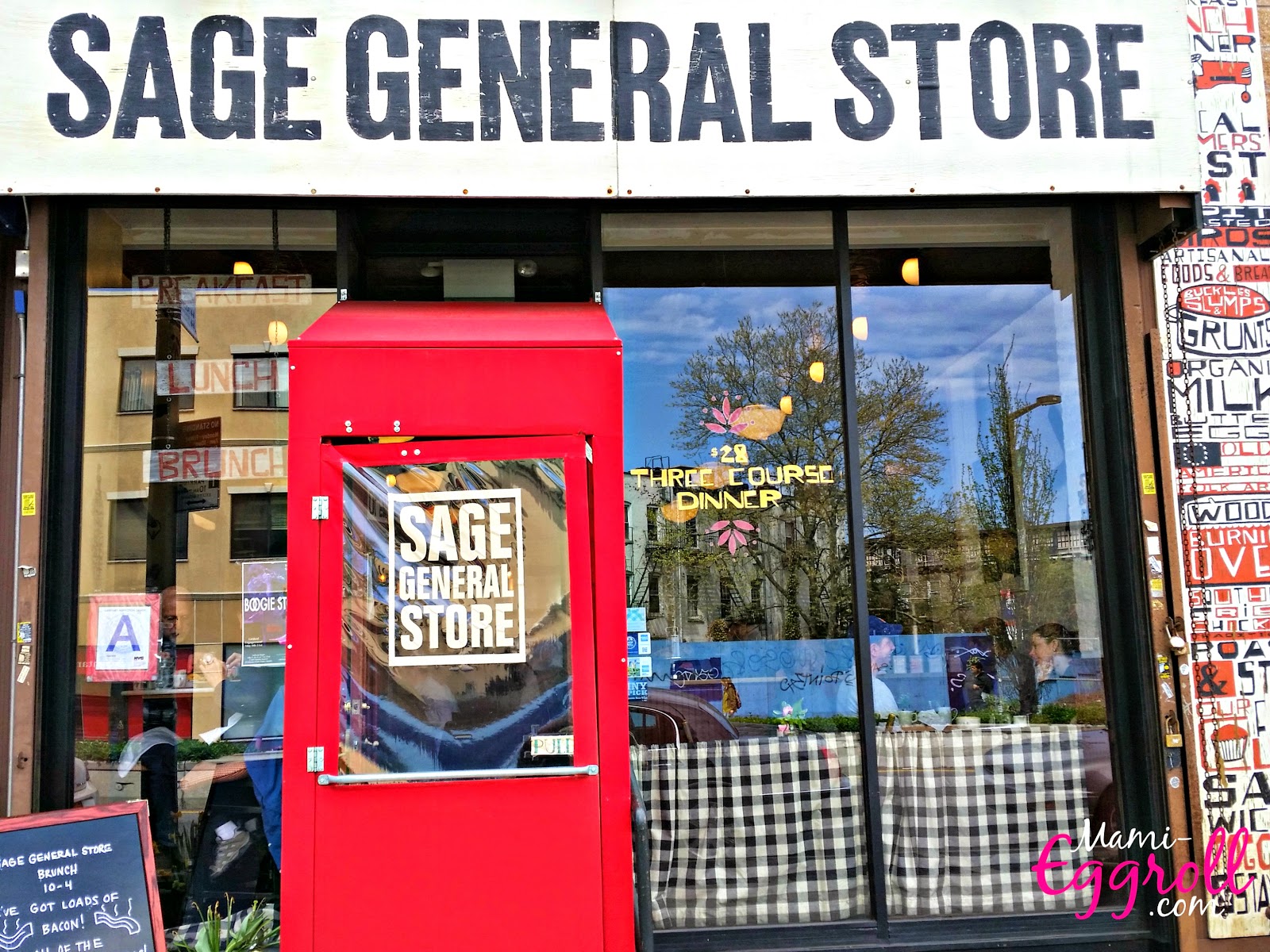 The exterior of the hidden gem is both rustic and inviting with a chalkboard sign boasting "We got loads of Bacon! AND all the other brunch essentials!" Seriously, I didn't have to keep reading, the sign had me had "loads of bacon!"  I kept reading anyway and I was intrigued by the unlimited mimosas and Bloody Mary's. 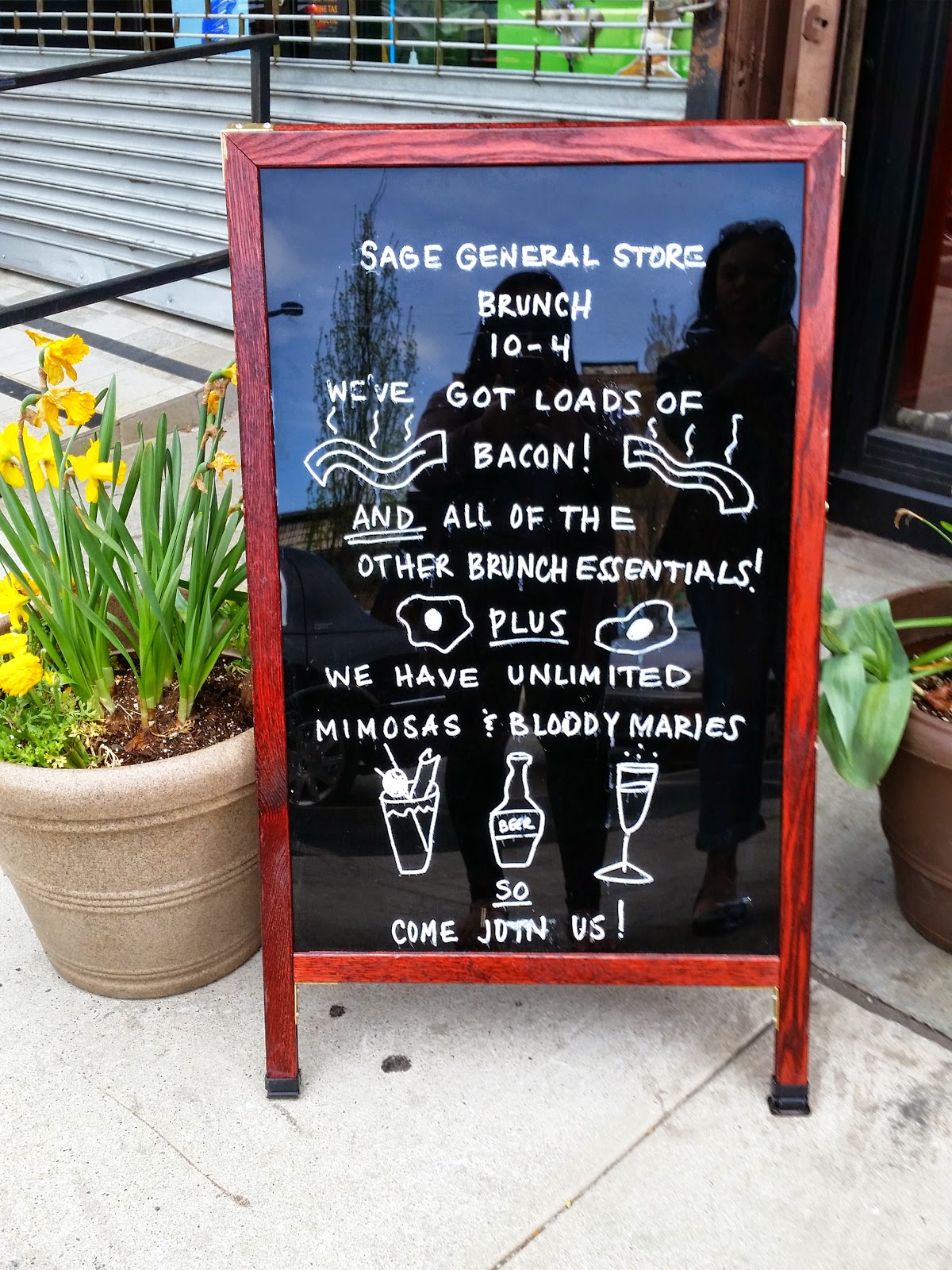 The "All You can Drink" special was $15.00 per person for an hour at a table or no time restrictions if you sat at the bar.  My biggest regret was not booking a room for another night so we could take part in the day drinking; if I did, it would be a LONG ASS drive back to Massachusetts and I'd probably not have a driver's license or a job the next day.

We walked into the restaurant just shy of noon on a Sunday in early May and there was a short 15 minute wait for our party of four.  The dining patrons was a mixture of family with small children, young and old couples and group of guys wanting to grab a bite to eat after a good workout.  The servers were laid back and seated us despite the other two fellow diners not being there.  Someone had read somewhere that there are only 14 seats but while we were there, there seemed to be more seats than that, after all, our corner alone already had 8 seats.

The decor was rustic chic with mason jars filled with FRESH wild flowers and the gingham curtains was reminiscent of a country setting.  We were immediately brought menus and mason jars filled with water.  The waitress went over the drink specials and Christine and I got the handmade raspberry lemonade and ginger mint green tea respectively.  Both were cool, quenching and welcoming after a long night of drinking. 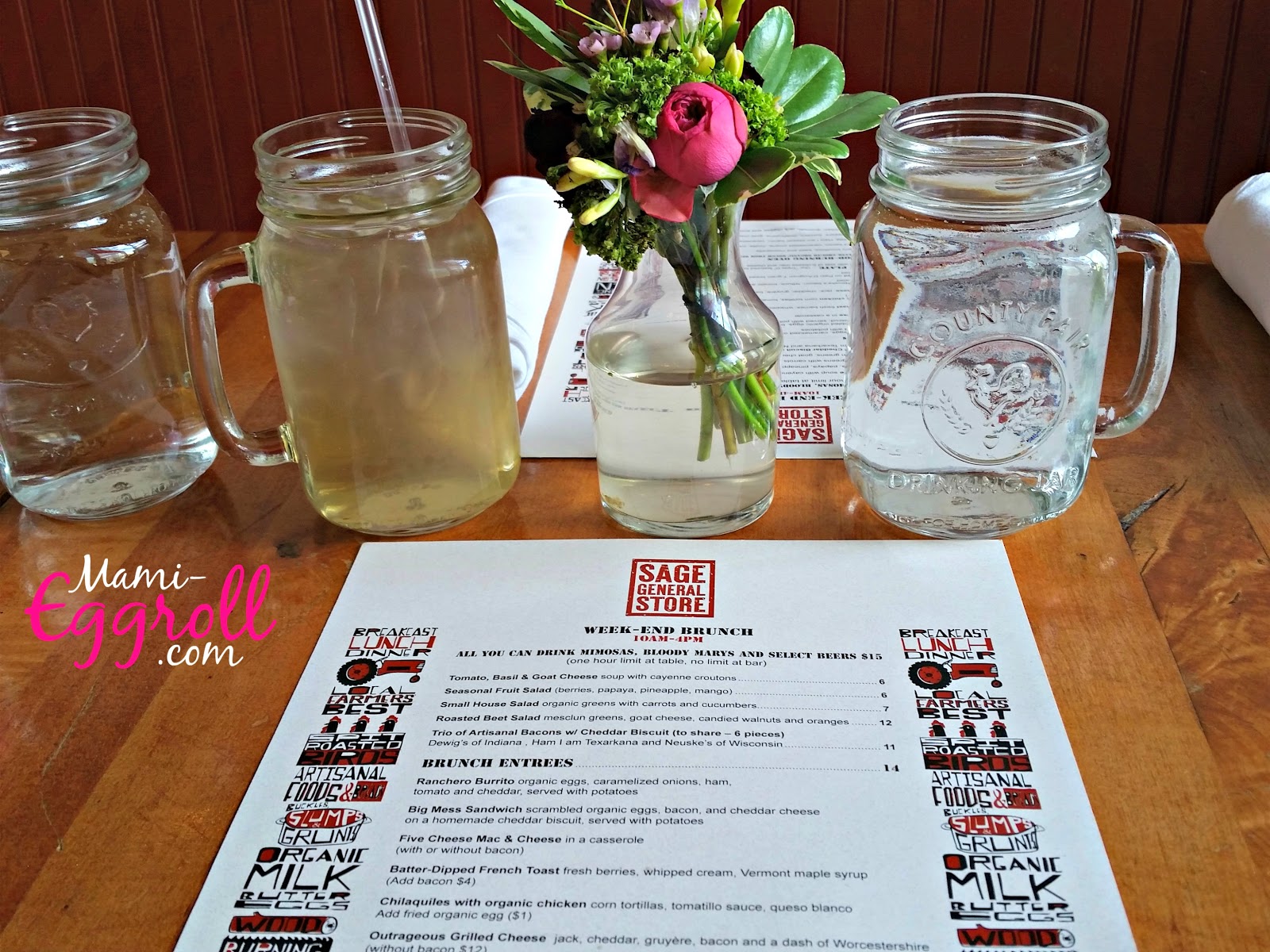 Our friends arrived and we shared stories and relived the events that took place just hours before our brunch... how amazing the dinner at Spice Market was, me dancing without my shoes, people burping (possibly other stuff) on the dance floor, both Christine and I spilling our "Road Sodas" in the car and arguing with the hotel security about the road sodas, "But it's a road soda... I made it and it's called a ROAD soda for a reason."

We couldn't decide on one entree so the birthday girl and I coerced the other two to order everything and share.  Family style.. the only way groups should eat! (maybe that is why I am a huge fan of Tapas and Dim Sum)

There was a 3 course bacon brunch on the menu for $29.00 that included a small cheddar biscuit with a delicious sweet bacon marmalade dipping sauce (made in Brooklyn) along with a trio of  artisan bacon slices including Wisconsin Neuske's apple wood smoked bacon,  an Indiana Dewigs slab bacon and my favorite from Texas/Arkansas, the "Ham I Am" peppered bacon. 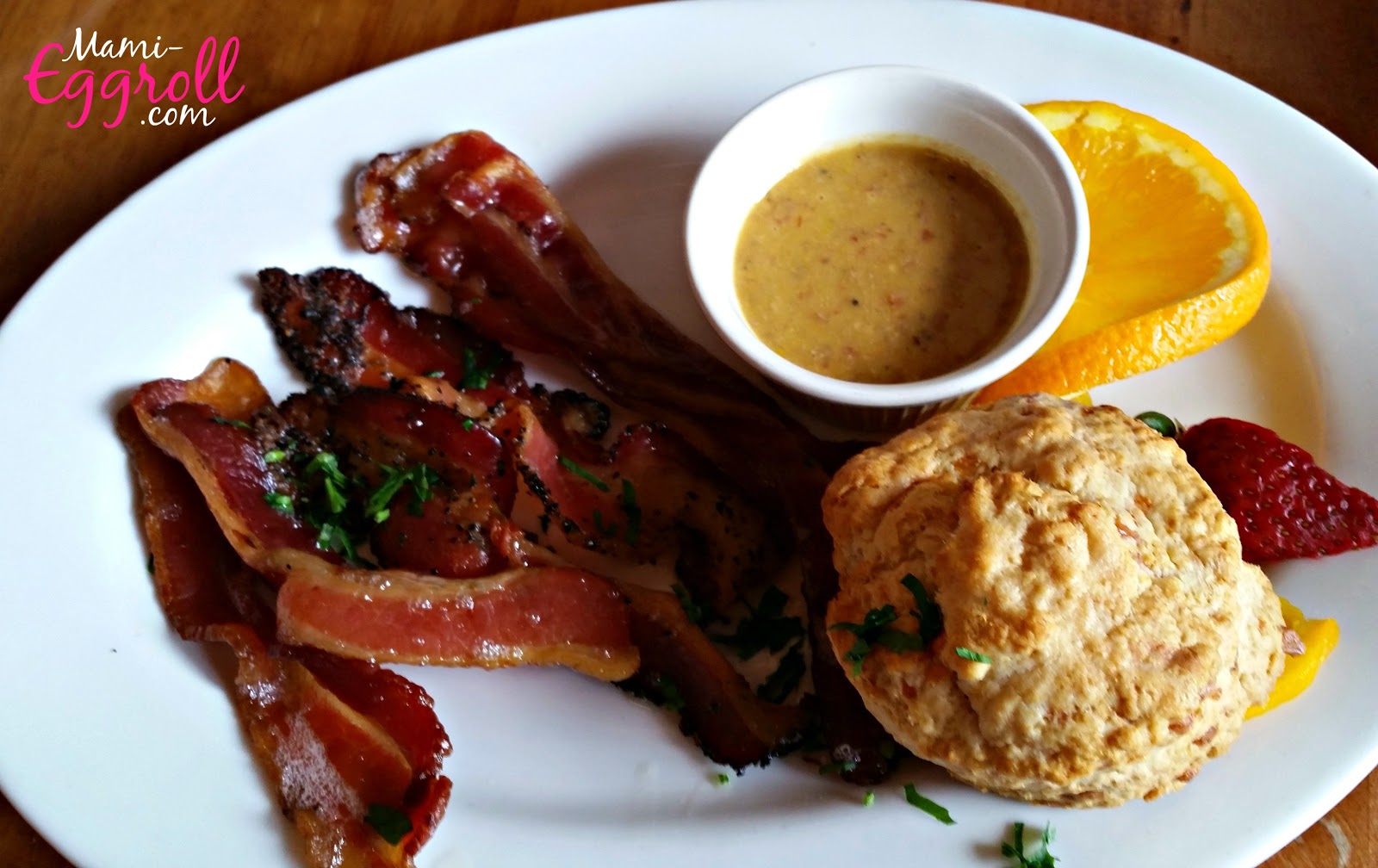 For the 2nd course, there were a handful of entrees to choose from and we went with the Wisconsin breakfast pizza with Neuske's bacon, caramelized onion, ricotta and creme fraiche.  The 12" pizza was made in the semi-open kitchen/bar area and cooked in the wood burning oven, served hot and delicious.  The cheese, bacon and onions was a great sweet and savory blend and the crust was soft on the inside and crispy on the outside.  Per the menu, the brunch pizza is made with wholesome hand ground organic dough from Berkshire Mountain Bakery based out of Massachusetts. 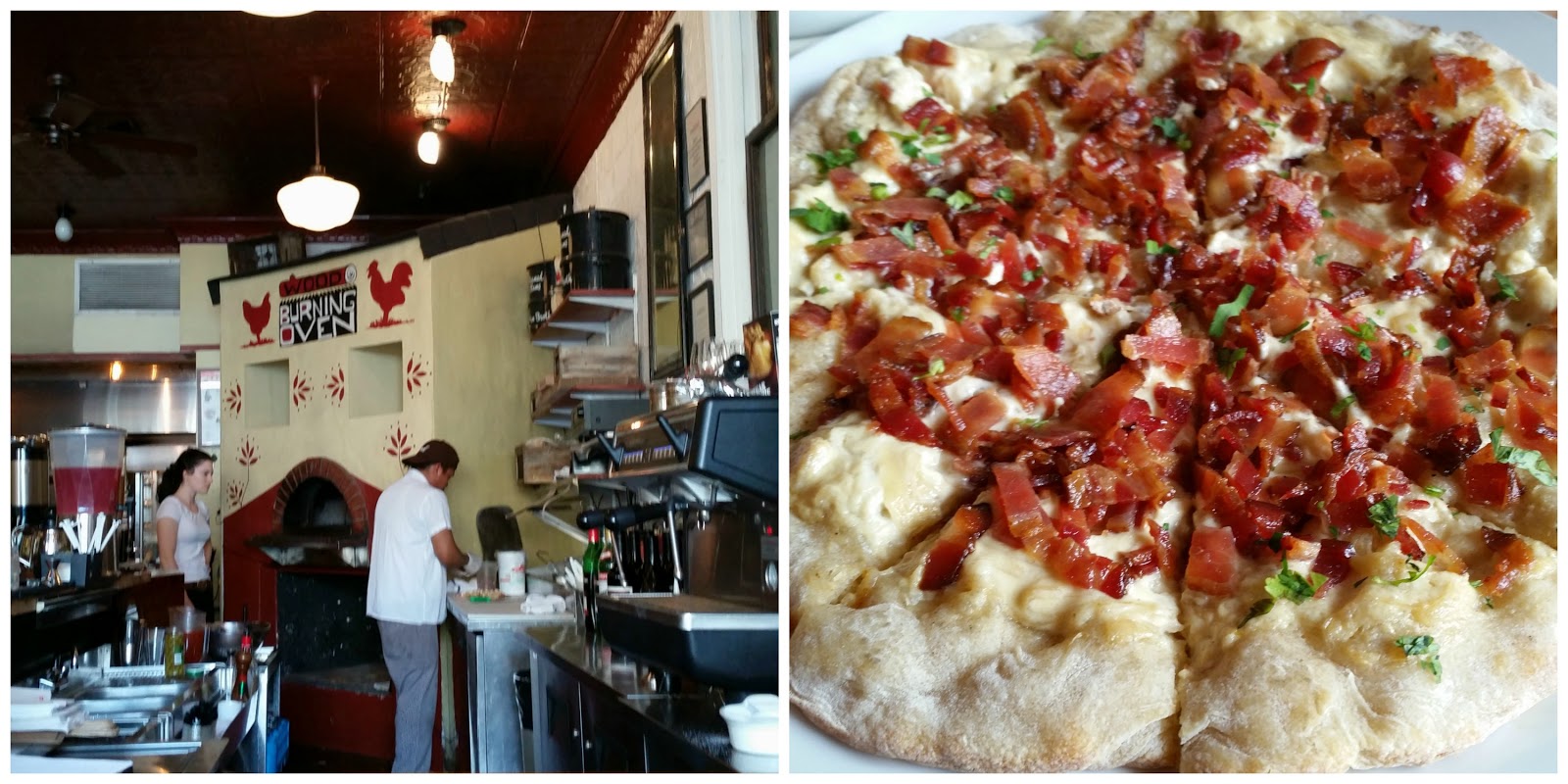 Christine's suspicions proved correct, her cousin Kyle picked the battered dip french toast for his entree choice.  Kyle mentioned that he usually doesn't like maple syrup but this one was an exception.  I loved the ample fresh berries that not only dressed the dish but it was almost like an extra side. 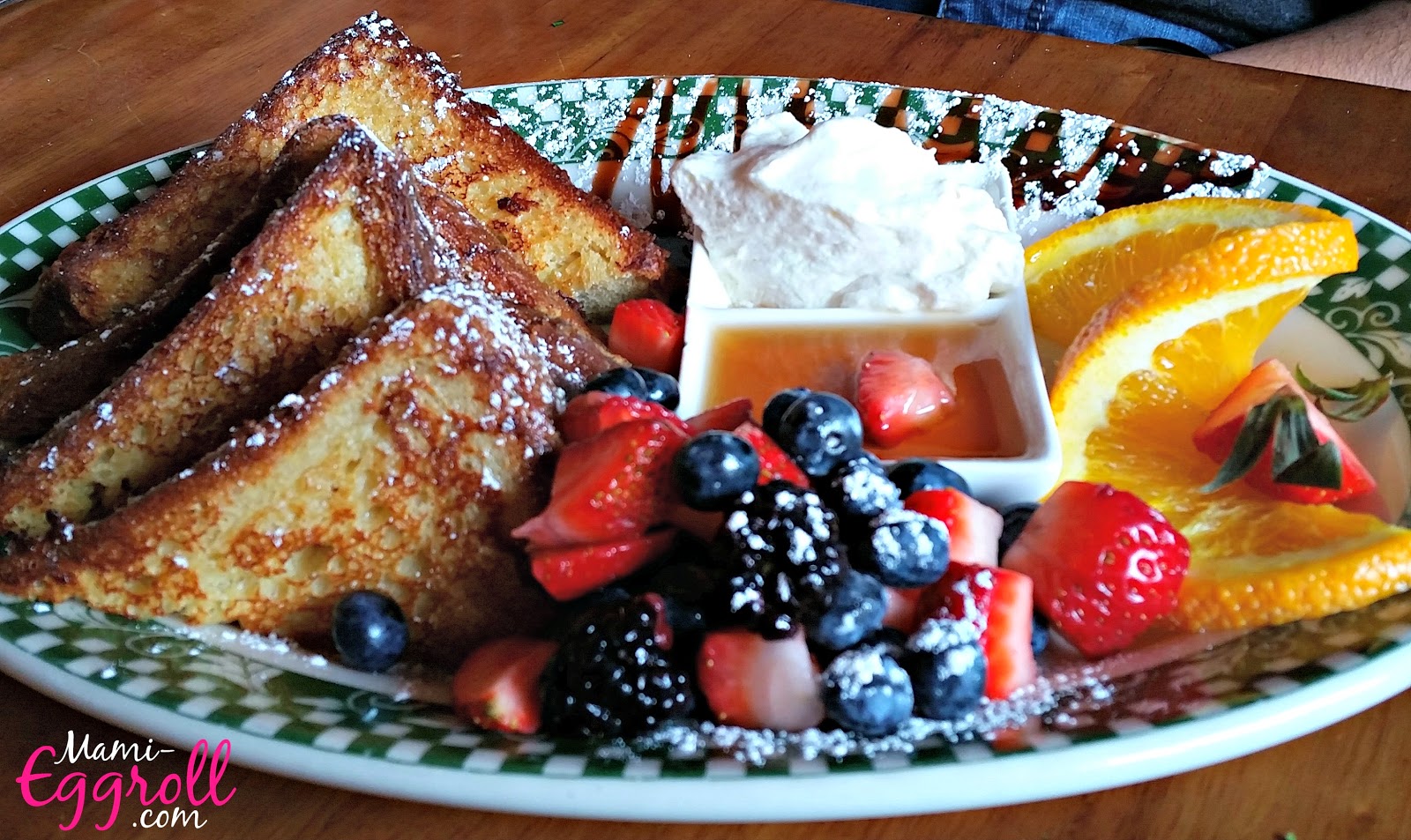 RJ couldn't decide between the chicken or grilled cheese but he went with the grilled bacon and Gruyere cheese sandwich with gold Yukon potato home fries  and a side of tomato basil soup.  The sandwich was amazing and it paired well with the tomato soup.  The croutons in the soup was also good. Of course, we had to get mac and cheese casserole with bacon. I had something else in mind from the Yelp photos and reviews; it was rich and creamy but not what I expected.  I had my heart set on something that I could pick up with my fork but the consistency of the dish was more soupy and hard to eat,  I could have done without it.  Later I found out that they serve Mac and cheese casserole for brunch and the regular bacon mac and cheese for lunch and dinner. I thought anything that was cooked with cheese and baked qualified as a casserole. I was wrong. 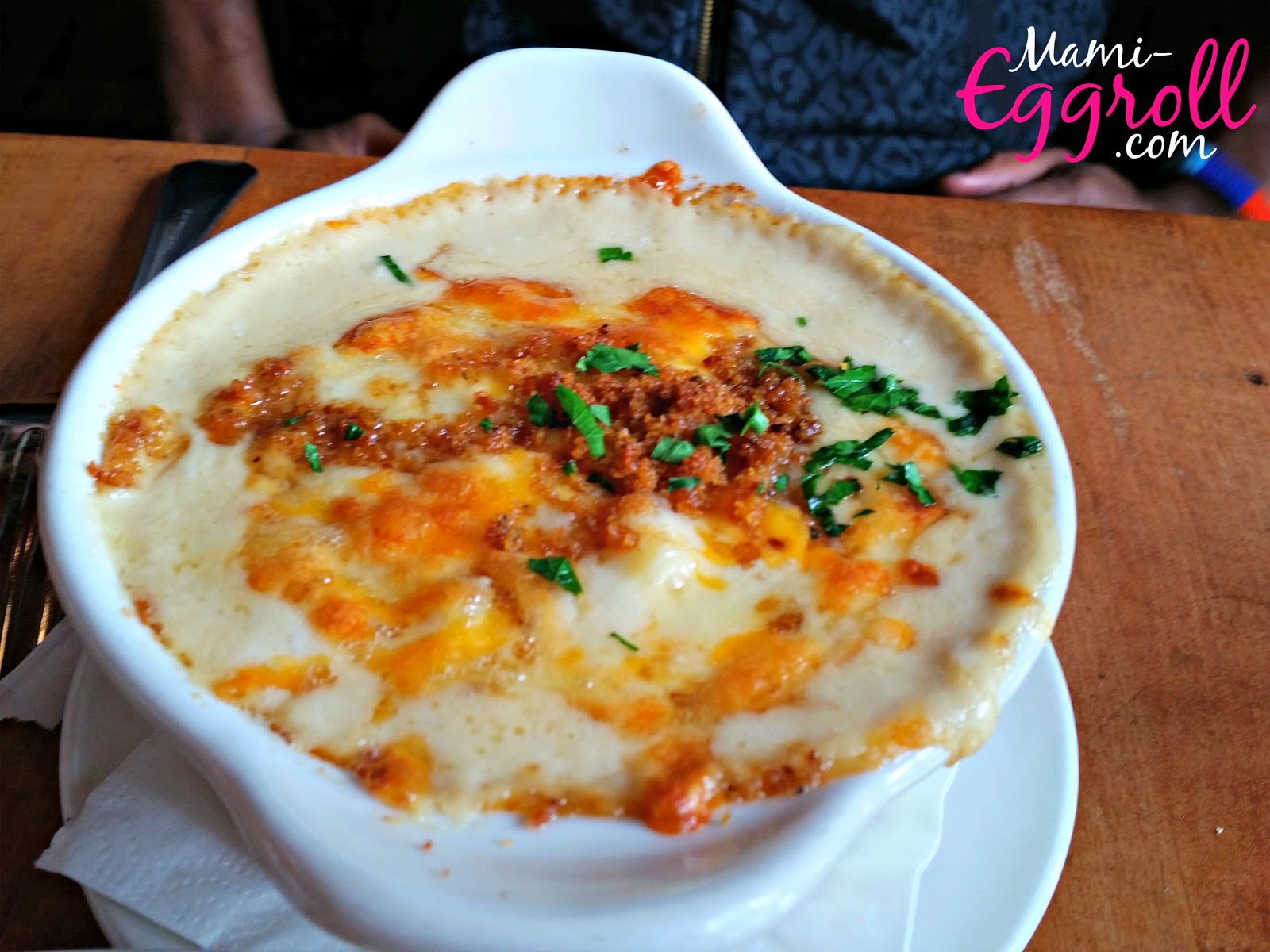 As our meals came out, the patrons nearby stared at our dishes asking what they were.  We didn't mind and we actually did the same thing before we ordered.  It was a comical moment when RJ was trying to be discreet about it and asked the server and she loudly replied back "Oh he's eating the ....!" 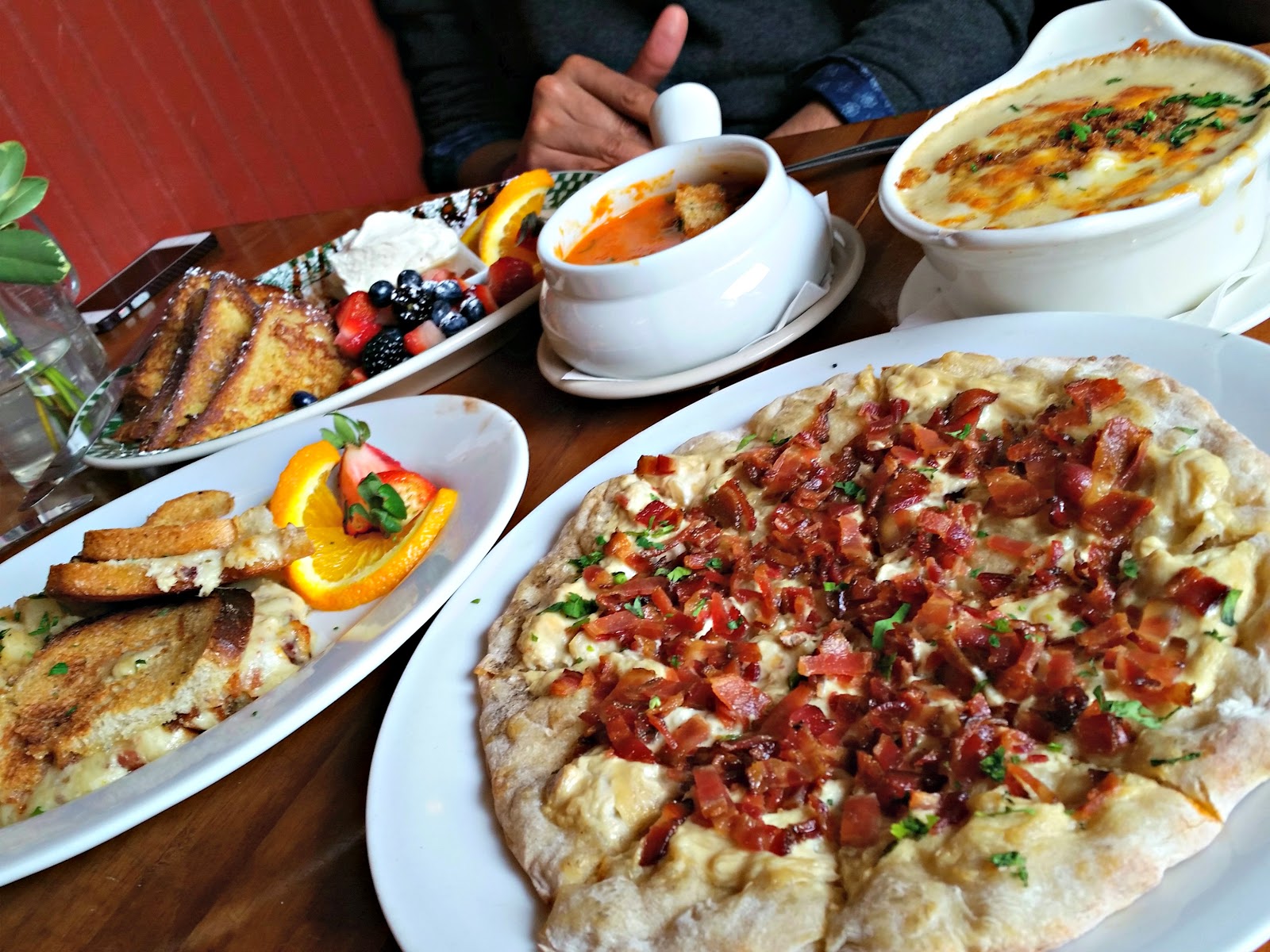 Our meal came to and end and we were more than satisfied.  Our pants were bursting at the seams (thank god for leggings!)  To our delight, we had completely forgot about the double fudge bacon brownie that was part of the 3 course bacon brunch.  We were all full but we had to try the beautiful display of chocolate, fruit and bacon!  Although the brownie does not contain actual nuts, it is made in the same facility that uses nuts, good thing to note! What made the brownie even cooler, was that it was served with a Jack Daniels whipped cream! 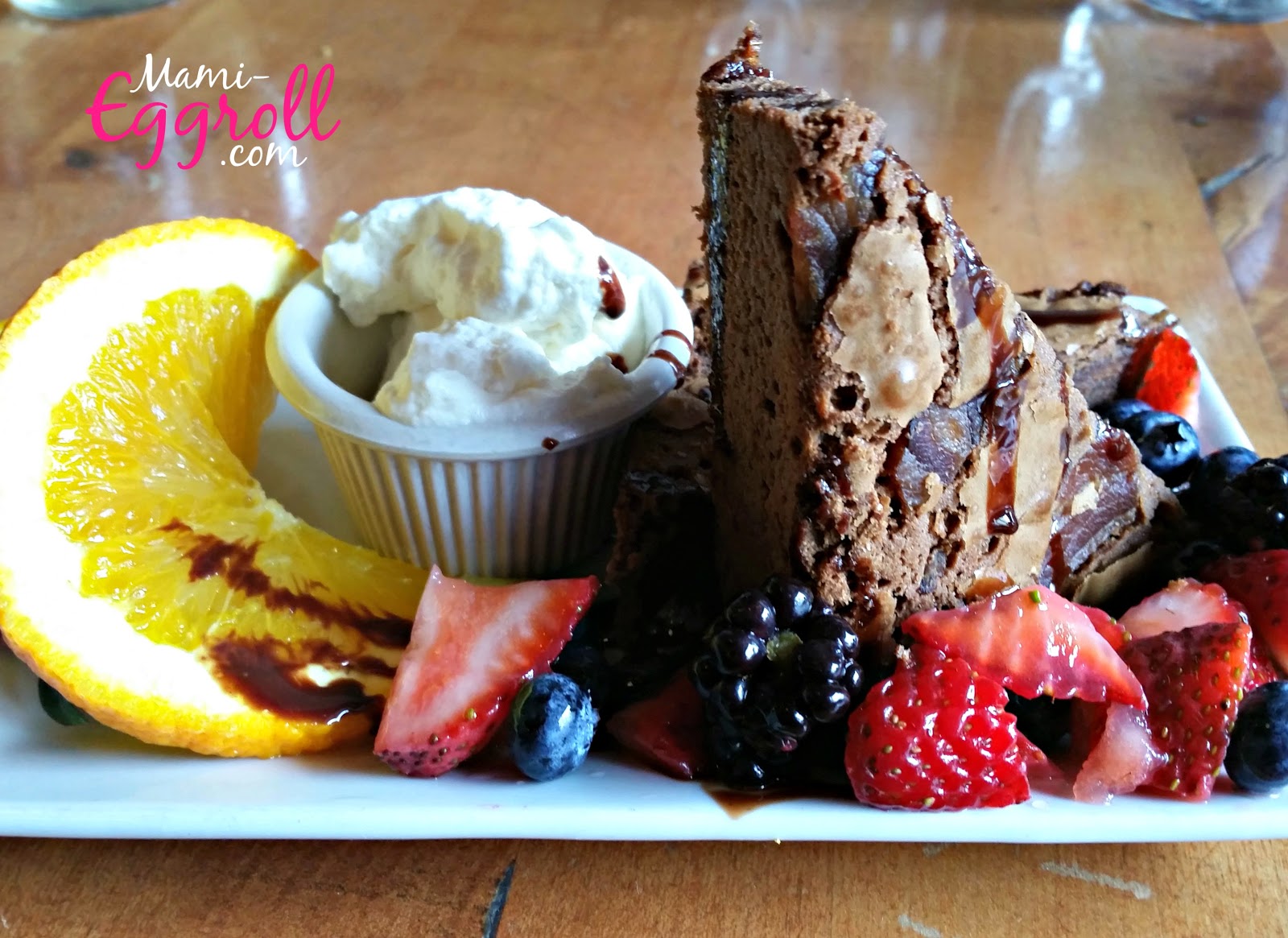 Although I could only get in two small bites, the warm rich dessert was to die for! It was sweet and chewy with a bit of salty bacon bites.  Almost like a salty caramel brownie or cookie bar but with bacon instead.

I thought that was a great deal and would definitely go back! The food was delicious and the portions were great!  All the dishes were presented beautifully on country style plates.

If only I can get the Mo to like NYC as much as I do... then again.. LIC isn't EXACTLY Manhattan .. so we shall see!