"Wok On" at the Radisson Blu in Cebu

The Radisson Blu was Cebu was our first choice hotel for Cebu City.  It's the most well recognized hotel in the city and very popula with tourists and business travelers alike.  The outdoor free form swimming pool is what intrigued me the most.  Unfortunately, there was a conference going on at the hotel and there were no rooms available when we decided we wanted to stay.

During my travel research, I read that the hotel's restaurant Feria offers some of the best meals in the city.  Many people suggested their "Wok On" theme night which featured Chinese and other Asian dishes.  I contacted the resort via email to see which nights the special menu took place and the concierge advised that the special buffet took place on Saturdays for lunch and for dinner.  On top of that, she advised that every Saturday, they offer promotional discounted rates on Saturdays.

The email suggested that I made reservations, so I had the front desk of our hotel coordinate reservations for us for 7:00.  The plan was to get to the hotel a couple of hours early and have pre-dinner drinks at the lobby bar.

Getting to the Radisson Blu at that time took forever with the insane Cebu traffic. I was on edge the whole time in the taxi ride as our cab driver maneuvered his way around jeepneys, trucks, motorbikes and even pedestrians.

Upon arrival, we had to go through security at the gate and the officers checked the trunk of our cab.  Before we walked into the hotel, we also went through a metal detector.  This level of security is common in prevalent in high end hotels in the Philippines as there has been terrorism activity involving hotel bombings in the past.

We were welcomed in the grand entrance lobby by a massive Christmas tree. 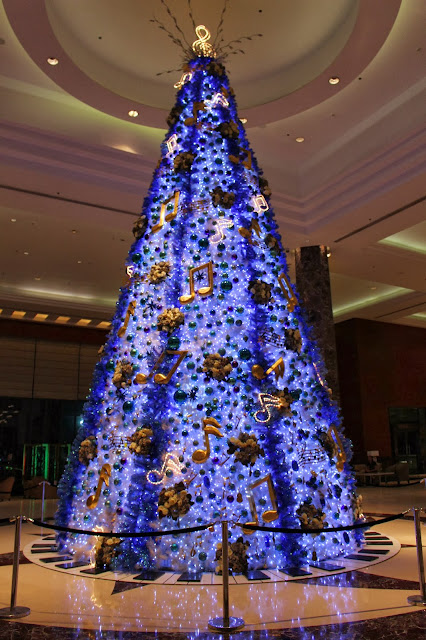 We found our way to the restaurant and was able to be seated although we were 30 minutes early since we nixed our plans for pre-dinner drinks.

The restaurant was beautiful decorated with architecture elements like the room divider composed of wooden rings.  The restaurant was empty and I had no idea why we had to make reservations.  (I found out 20 minutes later after the restaurant quickly got packed) 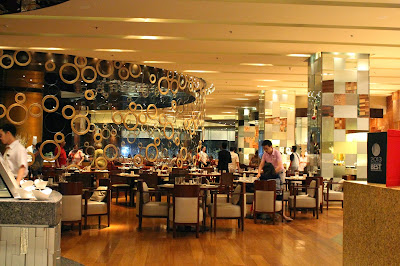 The Mo and I were overwhelmed at the offerings.  Here is an abridged version of what I can gather from my memory 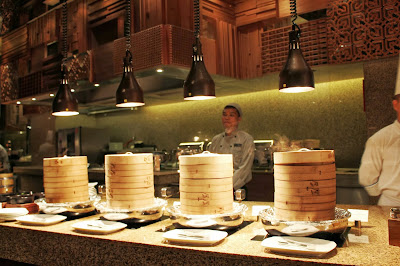 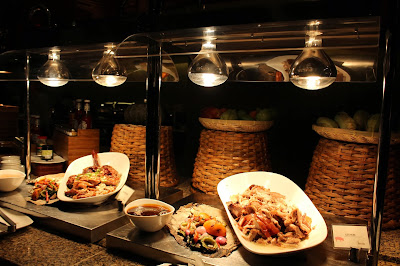 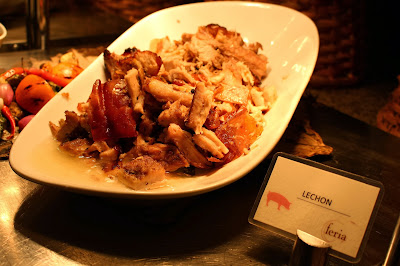 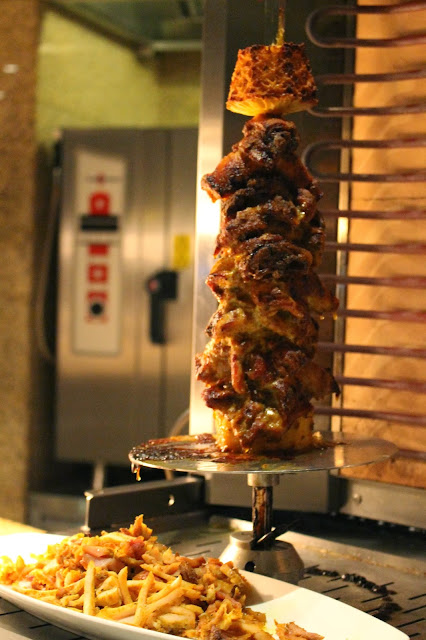 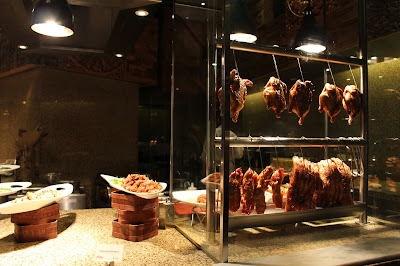 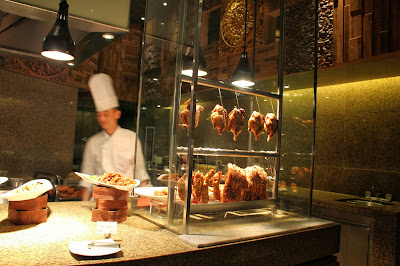 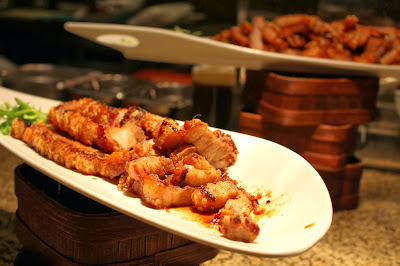 There was so much food that the Mo didn't even notice the Sushi bar in the center of the restaurant.  At first I made a decision that I would not eat any raw fish until the end of our trip in dear of food poisoning, but the tuna and salmon sashimi looked very fresh.  Although I didn't try any maki rolls, the tuna melted in my mouth. 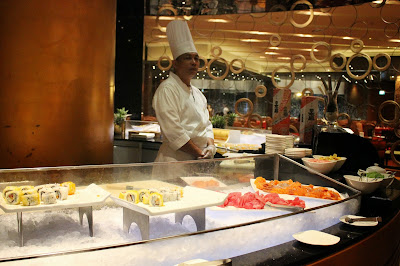 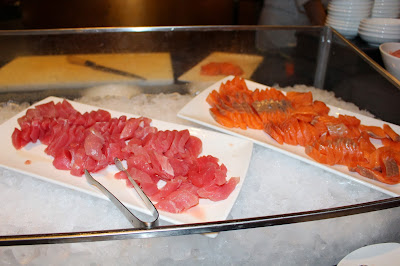 I was impressed the most with the noodle bar with the homemade noodles.  This was the Mo's favorite.  He was able to choose his own ingredients and sauces and the chef made his noodle bowl upon request.  He enjoyed it so much, he went for a second bowl.  I hope he doesn't get spoiled and think I'm going to be making noodles from scratch when we get home. 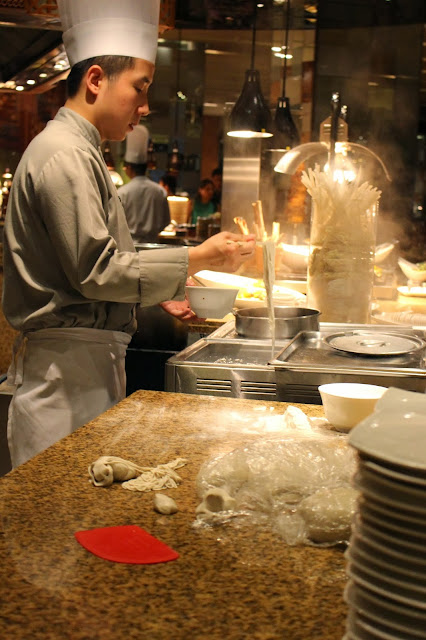 Other stations included a salad bar, a made to order pasta station with a variety of pastas, sauces and ingredients and a bread and cheese station.  If you didn't like Asian food, there were also sandwiches, calzones and pizza. 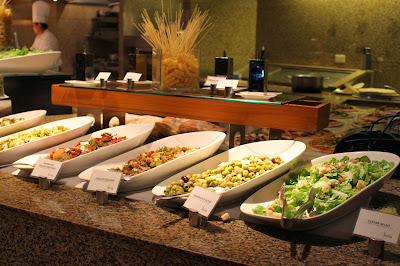 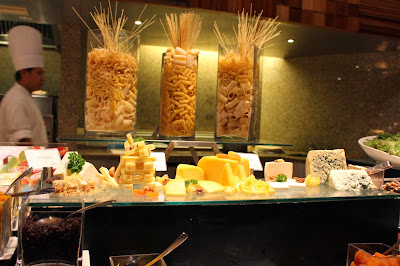 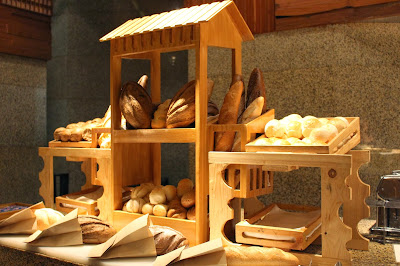 If you had room for dessert, (which we barely did), there was also a decadent dessert bar.  There dessert bar offered:
and other items that I cannot recall. 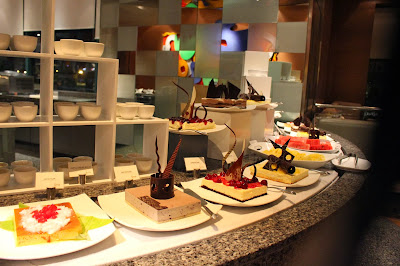 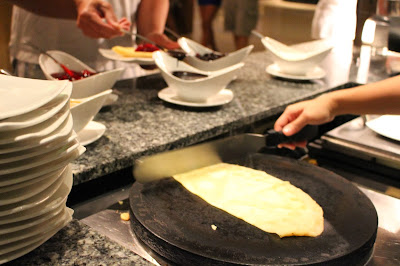 We ended our meal with an espresso and the waitress came by with our bill.  Our meal including taxes, service charges was less than $30.00 for the both of us.  I was shocked.  It was definitely an amazing meal and one of the best buffets that I've been too.

I have friends and family members that "don't do buffets" but this is one that I would definitely recommend for them to try.  It was very clean, well presented and the service was 5 stars. I've never been to Vegas so I cannot compare but the price was just right.