We headed towards I.T. Park for some pre-dinner drinks and people watch.  I really wanted to sing karaoke so I was hoping to get the Mo drunk so I could
coerce him into singing a few tunes with me at the 24 hour karaoke joint. 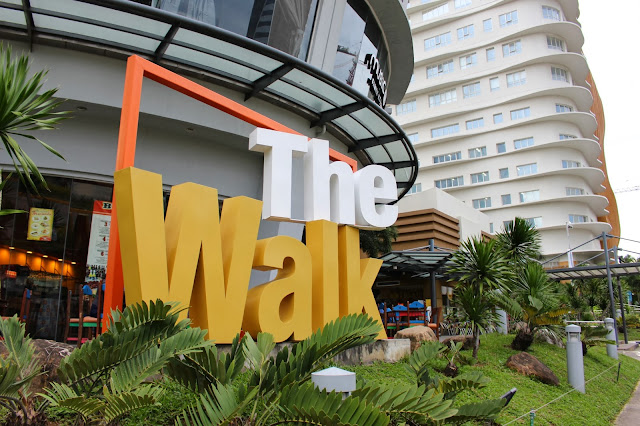 Casa Verde, an "American style casual dining" restaurant was bumping the previous night so I wanted to give it a try.  It seemed as if pre-dinner drinks were not the norm around here, the waitress was confused why we wanted to sit at the bar and order drinks in lieu of a comfortable table. 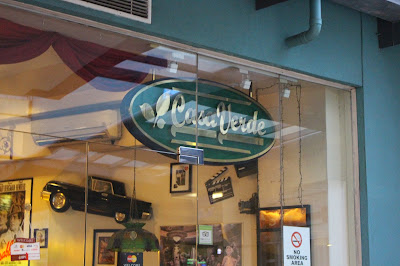 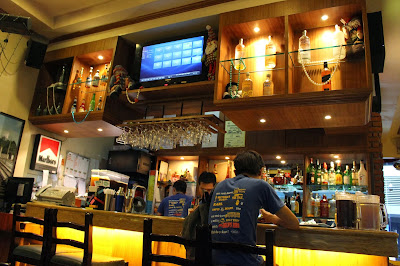 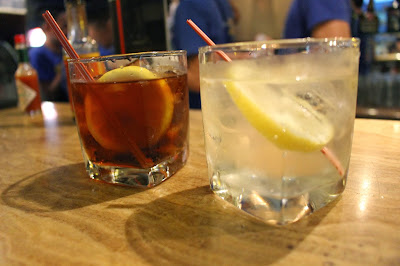 We got our drinks that were mostly soda and only 1 oz booze.  I watched the bartender measure the vodka for my drink and the rum for the Mo's.  How are we supposed to get tipsy off an oz? We were not going to stay there if we wanted a buzz so we paid our tab and left.

We walked over to the nearby Gusto Urban Cafe & Wine Bar where they had posh outdoor seating, great for people watching.  We sat on the comfortable chairs and studied the menu.  This place caters to the expats and the prices definitely indicated that.  It was like paying New York prices for booze! While we were there, the clientele appeared to be all Koreans living in the Philippines.  The Mo got a glass of white wine and I got a glass of red wine.  It was really nice to sit in the open air and enjoy it.  It was absolutely the perfect 82 degrees weather with no humidity but a nice breeze every so often. 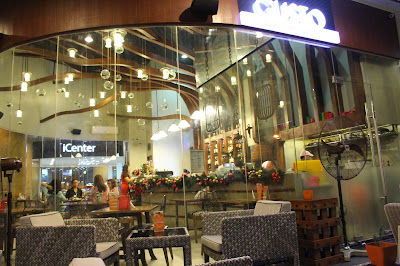 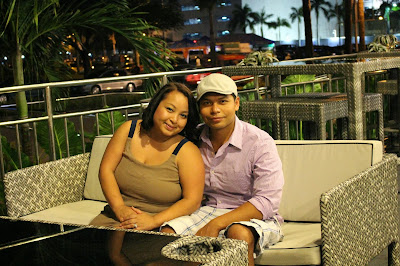 I had my heart set on going to the Cable Car for their weekly Tuesday night beer pong tournament.  The Cable Car originated in San Francisco and has become a hip bar in both their Manila and Banilad locations.  When we walked in the bar around 7:00 PM, we were the only ones there.  I asked what time the tournament started and the doorman advised 10:00 PM.  We decided to grab dinner and come back a few hours later.

I read great reviews on an Asian restaurant called "Little Saigon Big Bangkok" which was rated #7 out of 296 restaurants in Cebu City.  The name itself was pretty cool.  Fortunately for us, the Vietnamese & Thai fusion restaurant was a stone's throw away from Cable car AND our hotel. 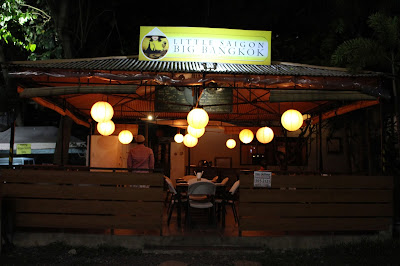 We chose to sit outside and viewed the chalkboard for their daily specials.  The restaurant was more than a Vietnamese/Thai fusion, they also had Asian influences.  For instance, they offered Roti with three dipping sauces as an appetizer which one can argue that the menu item is a staple bread dish in Malaysia and Indonesia. 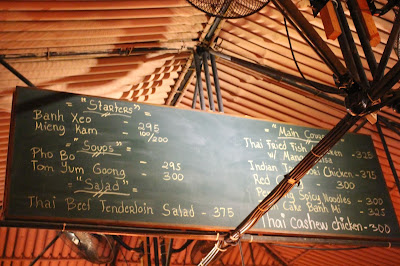 They also had tandoori chicken which is an Indian dish.  In the dining area, there was a big metal cooking apparatus that looked like an industrial deep fryer with a lid. I asked what that was for and the waiter advised it was used to cook the tandoori chicken.

The Mo and I shared the goi cuon, (Fresh roll), cha gio (fried spring roll) and roti bread with dipping sauce.
The staple Vietnamese spring rolls was not what we expected.  It was stuffed with radished and lots of carrots and no lettuce at all.  The dipping sauce was more sour than sweet.  We did not like this appetizer. 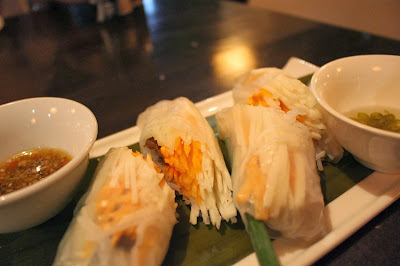 The roti bread was delicious. It was fluffy, flaky and served hot.  The three different dipping sauces were: hot chili paste, peanut sauce and nom prik ong (pork).  They were all spicy but in a good rewarding kind of way. 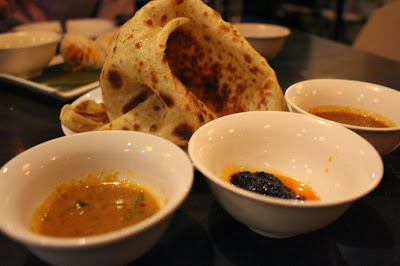 The fried spring was inline with what I am used to back in the states.  It was pretty good.  Each pieces was 50 pesos about $1.15 USD

I must say, I do love that most restaurants allow you order just one pieces of an appetizer.  If you know me at all, I'm all about wanting to order "family style" meals so I can try different things.  In this case, I can order my own single fresh spring roll and single fried spring roll and be content without my friends joking, "What do YOU want me to order Kim?" 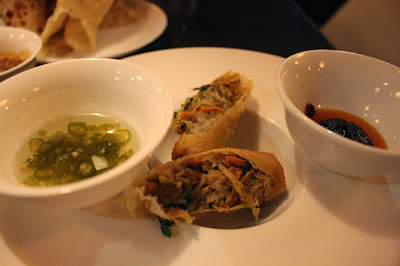 With their limited menu, we order a typical Thai dish and a Vietnamese staple.  The noodle dish came out beautifully presented on banana leaves garnished with little calamansi limes.  The Phad Thai was more sour than sweet. 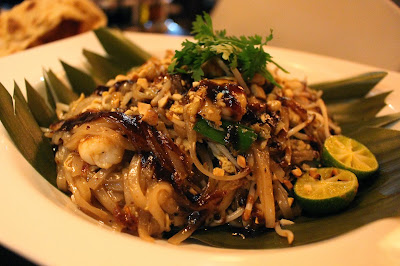 We wanted to try the Signature 12 hour smoked pork Banh Mi for the Vietnamese option.  A true Banh mi sandwiches is served on a crusty french baguette.  This was served on a toasted sub roll.  The pork was indeed flavorful and tender.  The special mayonnaise sauce was savory and satisfying.  Overall, I would have given this sandwich a 10 had it been on the correct bread. 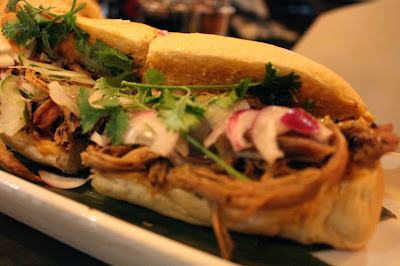 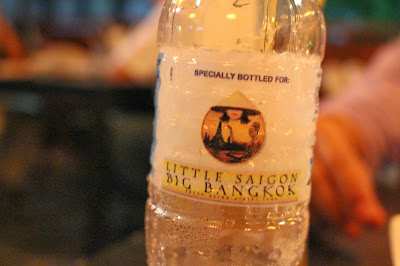 We were stuffed to the max and decided to head home and catch up on some TV shows since we had a couple more hours to kill before the beer pong tournament.

Of course we past out and never made it to the bar.  Still, a great night in the city!