$1.00 Oysters and an affordable steakhouse in the Boston area

To celebrate our 10 years together, the Mo and I had planned on going to one of my favorite steakhouse, Del Frisco's in the Seaport district.  I had everything planned out, reservations was made for Sunday at 6:00 PM and I already knew what I was going to order: The "Prime Pair Sunday" special which included a salad, 8oz filet, with a choice of their delicious crab cake, shrimp or scallops and a side dish.

On our way to Boston, I had a sudden desire for raw oysters on the half shell.  I didn't want to splurge and pay the premium price for oysters at Del Frisco's so I wanted to go somewhere else beforehand.  We were already on 93 near Stoneham when I suggested the detour.

I made a quick call to Del Frisco's and pushed back our reservations to a later time slot.  A coworker told me about a place in Medford with $1.00 oysters. I forgot the name but I knew it was a Japanese/Chinese restaurant. After a Google search for "Japanese restaurants Medford" and calling the mystery restaurant, we were seated at the lit up bar of Yoki Restaurant & Sushi Bar.

The restaurant was a happening spot for a Sunday night filled with many couples both young and older sitting at the tables and bar area.  We were greeted by a friendly bartender that asked us if we were staying for dinner or drinks.  We were upfront and said we were there for drinks and the $1.00 oysters and she was happy to take our drink orders.

I started with their signature lychee martini, which the bartender said was their most popular drink.  The tasty drink was a concoction of Ketal One vodka, black raspberry,  lychee and pineapple juice shaken and poured into a chilled martini glass and garnished with two plump lychee fruits.  The Mo got his usual scotch on the rocks. 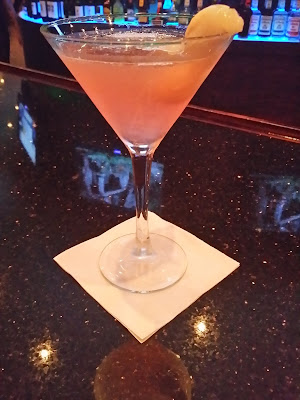 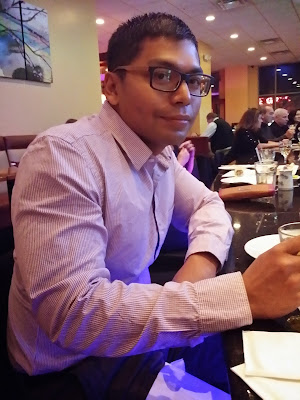 Within the hour. we slurped on 2 dozen of succulent oysters.  They were definitely fresh.  We will be back on another Sunday night to for more oysters and give their menu a try. 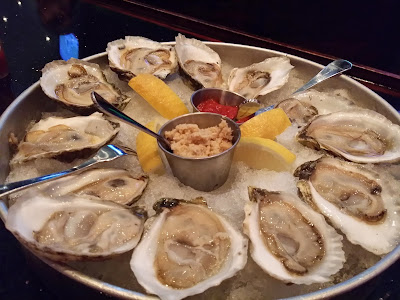 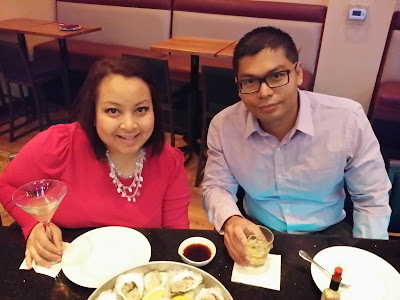 As we were walked towards the car, I came up with another suggestion, to venture out and try a different steakhouse, other than Del Frisco's.  I saw Frank's Steakhouse in Cambridge featured on Phantom Gourmet one weekend morning and looked it up.  "The Phantom Gourmet gave Frank's Steakhouse an "86" rating as well as placing it in the 'Top 5" for steakhouses, comfort food and neighborhood restaurants.  The reviews on Google, Yelp and Tripadvisor all looked promising so we gave it a shot.

The restaurant was easy to find on Mass. Ave and we were promptly seated upon arrival.  The decor is a bit dated and nostalgia of a '60's style steakhouse.  The menus were a little tethered but were still functional.  The Mo had another glass of scotch and I ordered a half carafe of house red wine, fancy huh? The half carafe only set us back less than eight bucks, what a steal! 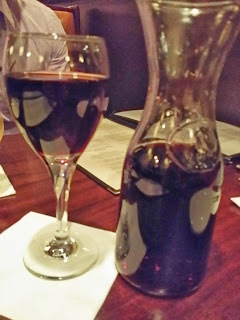 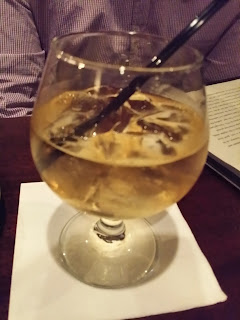 The complimentary loaf of bread was served hot on a cutting board with a serrated knife and pats of butter.  It was good but we didn't want to get full off of bread so we both stuck to a slice each.  it was nice and crusty on the outside and warm and soft on the inside. 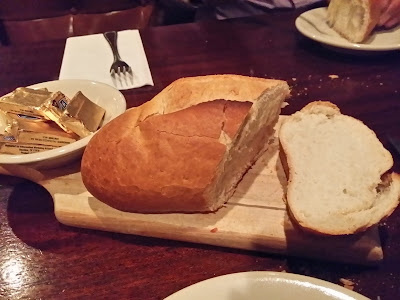 Random fun fact, the menu features the restaurant's story on their "About us" page.  Based on local legends, the restaurant didn't have a name at first and there was a regular "town drunk" name Frank that always sat at the first stool at the bar, so the owners named the restaurant after him.  I thought it was a cute coincidence that our favorite TV show drunk on Shameless is also named Frank.

Also, another fun fact, back then, there was a Chinese chef name Wee Leo that cooked the best Chinese food in the area upon request.  So during those decades back, one can go into Frank's and order the best prime rib in town as well as the best egg foo young at the same establishment.

We were intrigued by the 3 pound Delmonico steak with sides for $49.99 and had planned to order that.  After looking through their extensive menu of steaks and comfort foods, we finally came up with a conclusion.  We would start off with their Kansas City Wild Wings, fall of the bone, braised pork shanks based with BBQ Sauce.  The meat was definitely tender and tasty but I wished there was more BBQ sauce smothered on the meat.  I'm a big sauce person and would have definitely appreciated it. 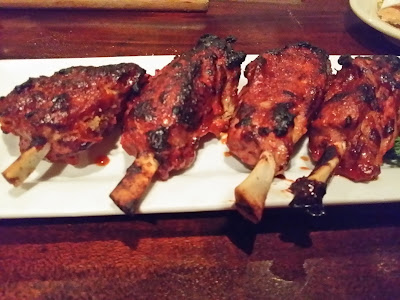 For dinner, I got their lamb shank Osso Bucco with mashed potatoes. The Osso Bucco is a staple Italian stew.  I died and went to heaven.  The slow coked dish was full of flavors that delighted my palate.  I could taste the fragrant tomato, onions and carrots in their rich sauce.  I've made braised lamb shank before and I've only had it with a red wine reduction so this was definitely a great change and yes I will try to imitate this dish at home. 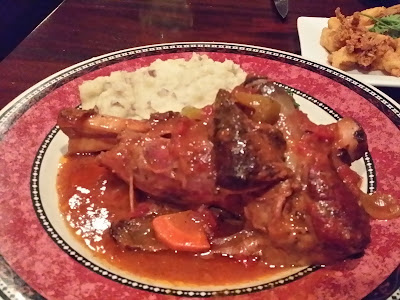 The Mo had the "prince" cut prime rib with fries and rice pilaf. He said it was very good. 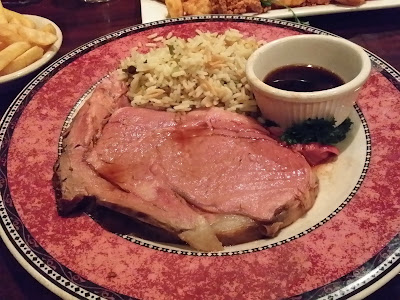 We both wanted to do a "Surf & Turf" combination but shared the seafood platter appetizer in addition to our own entrees.  The fried shrimp, calamari and succulent scallops were breaded and fried perfectly.  Of course our eyes were bigger than our stomach and we had plenty of leftovers. 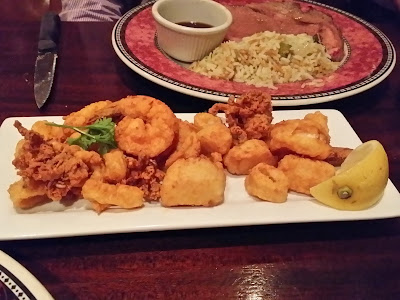 I felt like we were on a fun scavenger hunt that night looking for $1.00 oysters and great steak, why not end it with dessert? We considered going into the North End but didn't want to deal with the limited parking so we stopped by the Cheesecake Factory in Burlington on our way home.  The Mo doesn't really do cakes or sweets but he does like cheesecake.

We sat at the bar and ordered a cappuccino and the 5 year old little girl in me wanted a hot chocolate so I ordered the Dulce de leche. 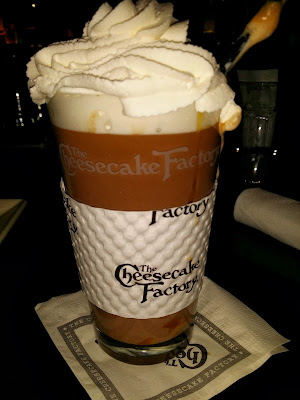 I couldn't decide on which cheesecake to order so I walked over to the display to survey all the offerings.  The red velvet, pumpkin and Oreo were all front runners.  The winning choice was the 30th anniversary Chocolate cake cheesecake with layers of original cheesecake, fudge cake and chocolate truffle cream.  It was absolutely decadent.  We couldn't even finish the dessert. 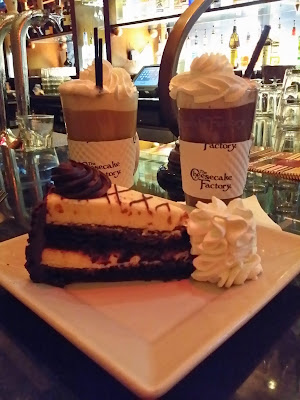 The night was a success! We found two new restaurants that we enjoyed and will return.

I truly learned that I have to be less neurotic and take it easy sometimes.  Less planing and do things on a whim based on what we I feel like doing at that moment.

With our planned trip to the Philippines coming up in a couple of days, I am going to try to take it day by day. We shall see how that goes!