Food and Drinks in Koh Phangan

Eating and drinking in Koh Phangan was a bit different than the other town we visited.  We spent a little more money than we did in the busy cities of Krabi and Patong Beach but we had some of the best foods ever.  There are less street vendors and food stalls and more small budget restaurants offering both Thai and western cuisine, catering to backpackers. 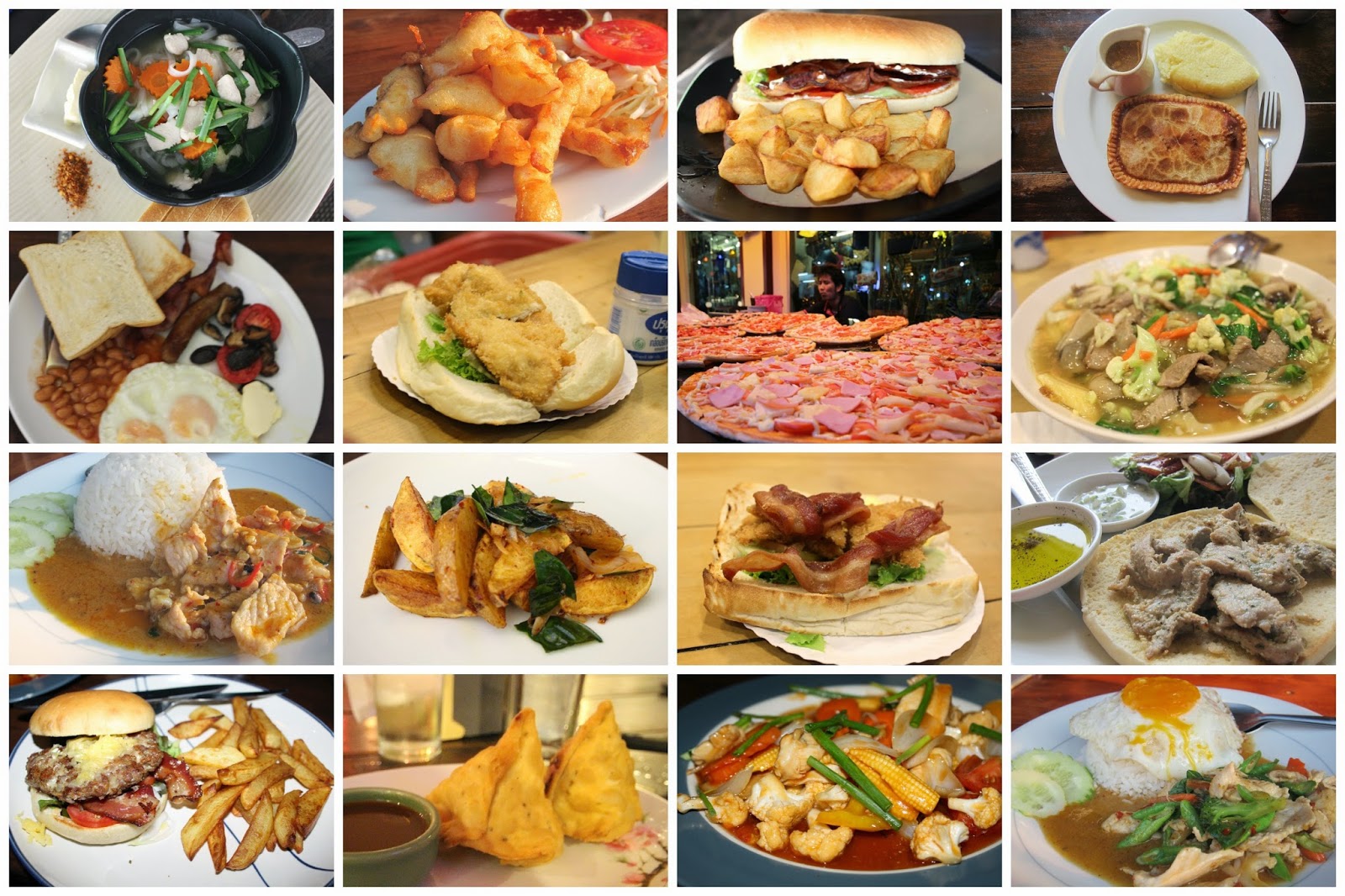 Our accommodation package at Shenanigan's also included daily breakfast (or lunch) and beverage vouchers for a "bucket drink" during our 5 night stay so our choices for most of our meals were limited.

Jon, the owner of the "Lazy" enterprise, came to Thailand 18 years ago.  Since then, he has opened up 3 hostels, Lazy House, Party Hostel and Shenanigans. He also owns and operates 3 restaurants in Haad Rin: Lazy, 2 Lazy and Outback Bar. I learned this from Jaime, a Western employee that has been there for 10 months.  He was staying at Shenanigans and asked for a job.

Paul, the manager at Shenanigans told me that all the ingredients for the English menu are authentic and imported so its the Real Deal, no imitation "mystery meat" bacon here.  Paul also recommended a couple of restaurants that we also visited during our stay: MonnaLisa and My Friend's Restaurant. (See Below)

Since Koh Phangan is a party night town, many restaurants do not open for breakfast until 10 AM.  We found this the hard way after our first night.  There are a couple 24 hr joints near the beach if you are an early riser.

Western Food
Many of our friends love the idea of traveling abroad to a foreign country but fear they cannot handle the local cuisine.  Here is a run down of the great Western food that we enjoyed during our 5 nights in Koh Phangan.  Prices for western food is definitely more than your local Thai food.

We tried to go to the highly rated Italian restaurant MonnaLisa in Haad Rin 3 nights in a row until we were able to finally get in the 3rd night after showing up super early.  The restaurant is always packed and there's a line out the door.  I'm not sure if it's like this all the time of if it's a busy time for them with Thai New Years and Full Moon Party being on the same week.

I was told the chef is Italian and the restaurant serves the best pizza and pasta on the island.  Some even boasted that it was the best pizza they've ever had! I've had New York and Chicago pizza, so I'm a bit skeptical, plus my favorite pizza is the sweet sauce at Espresso's in Lowell but the pizza at MonnaLisa was good. 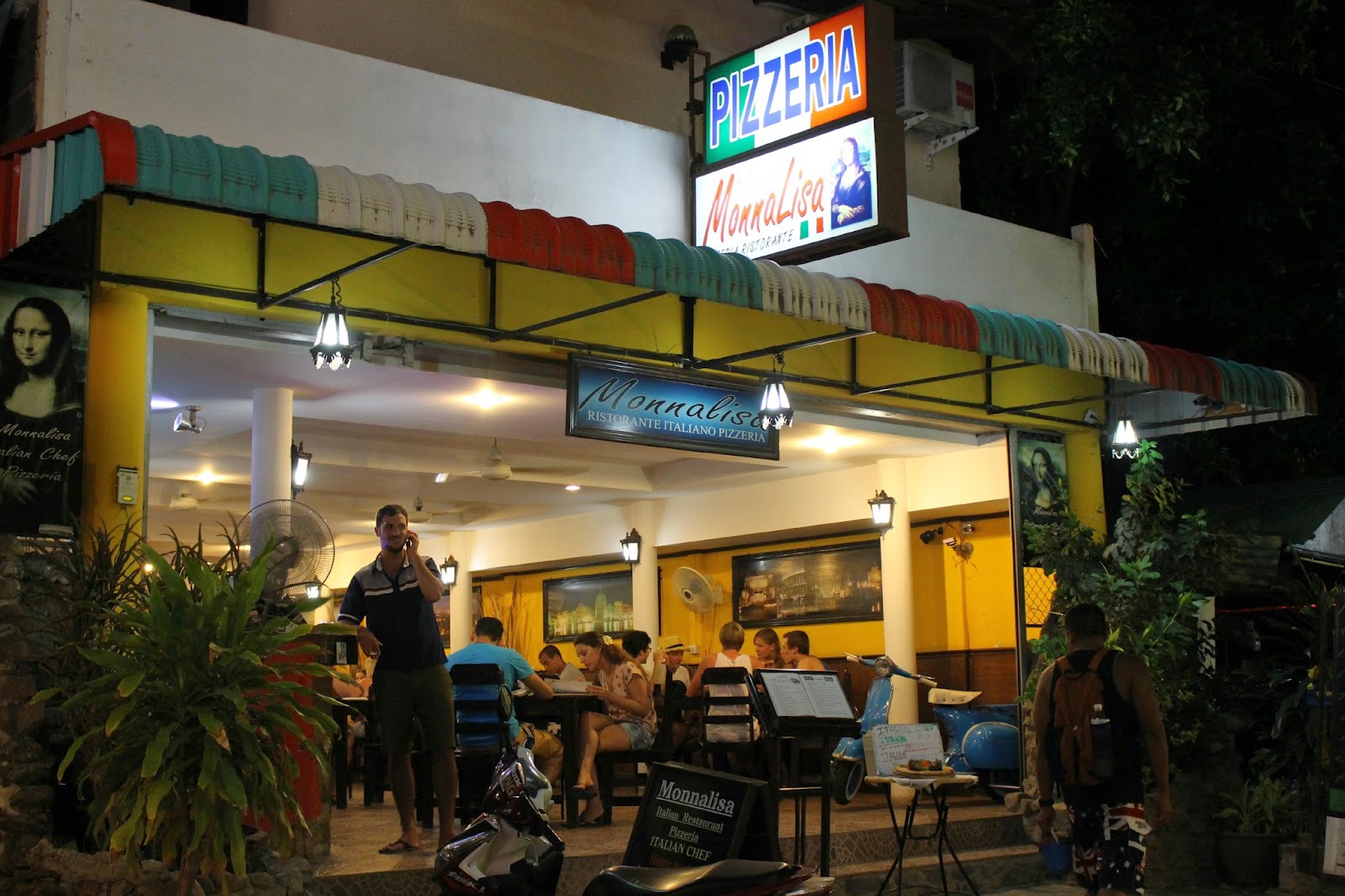 Bread and dipping sauce was brought to our table.  The bread was not warm so I asked them to toast it. We started off with the fried calamari and shrimp platter.  It was just OK.  I think the calamari needed a dipping sauce like marinara, tarter or even Thai Sweet Chili.

The Mo and I split a sausage and mushroom pizza and gnocchi carbonara.  The pizza was good, not as amazing as I've read but the gnocchi pasta dish was wonderful.  The homemade pasta was cooked to perfection!  The meal was good and only cost about $ 25.00 USD for an appetizer, and 2 main dishes.

Most of the food we ate was at Lazy Restaurant or 2 Lazy Restaurant.  The venue is geared towards traveling backpackers with an array of different menu options.  In the afternoon, they feature new movies on the overhead to those wanting to escape the hot sun. 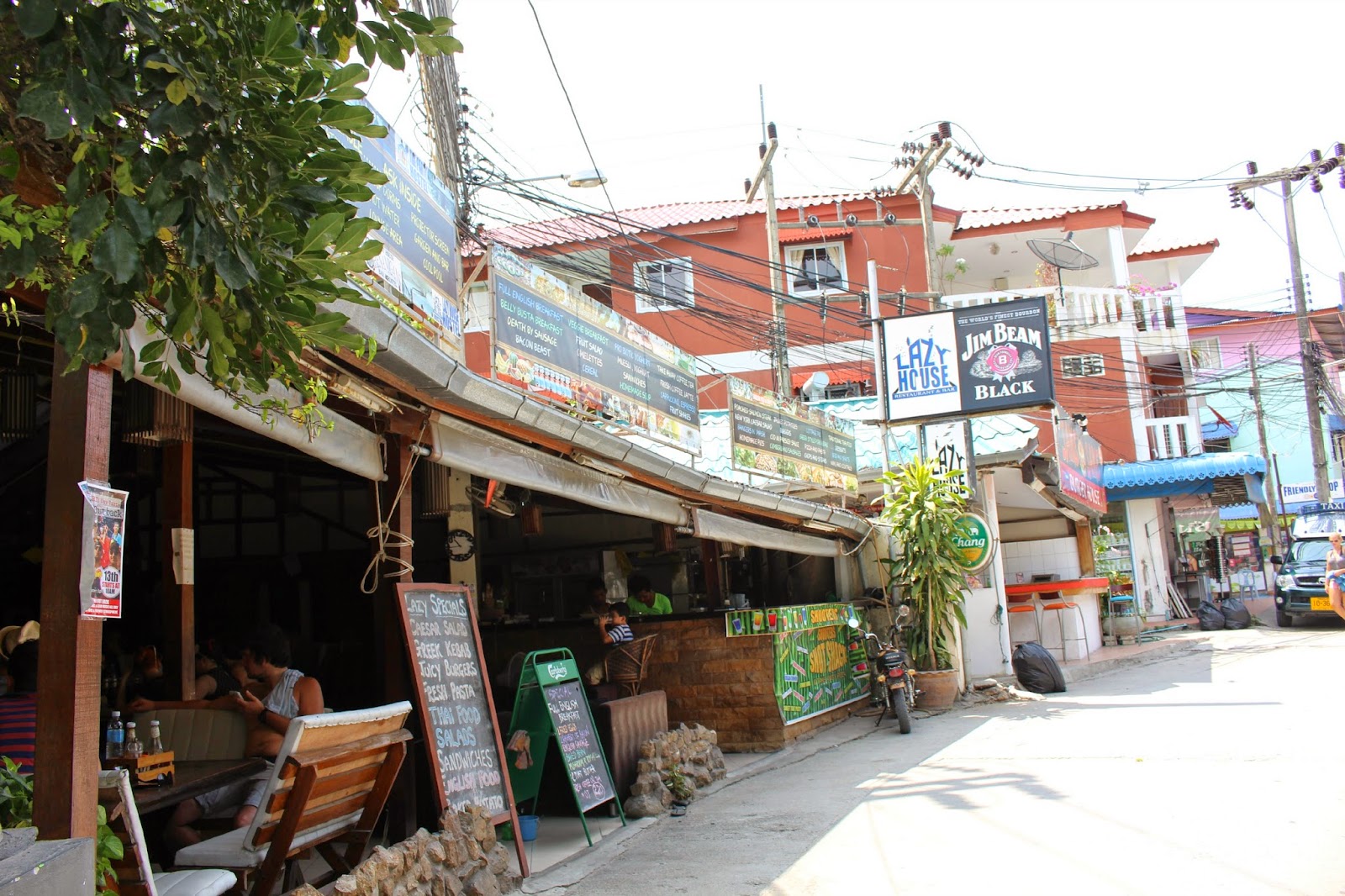 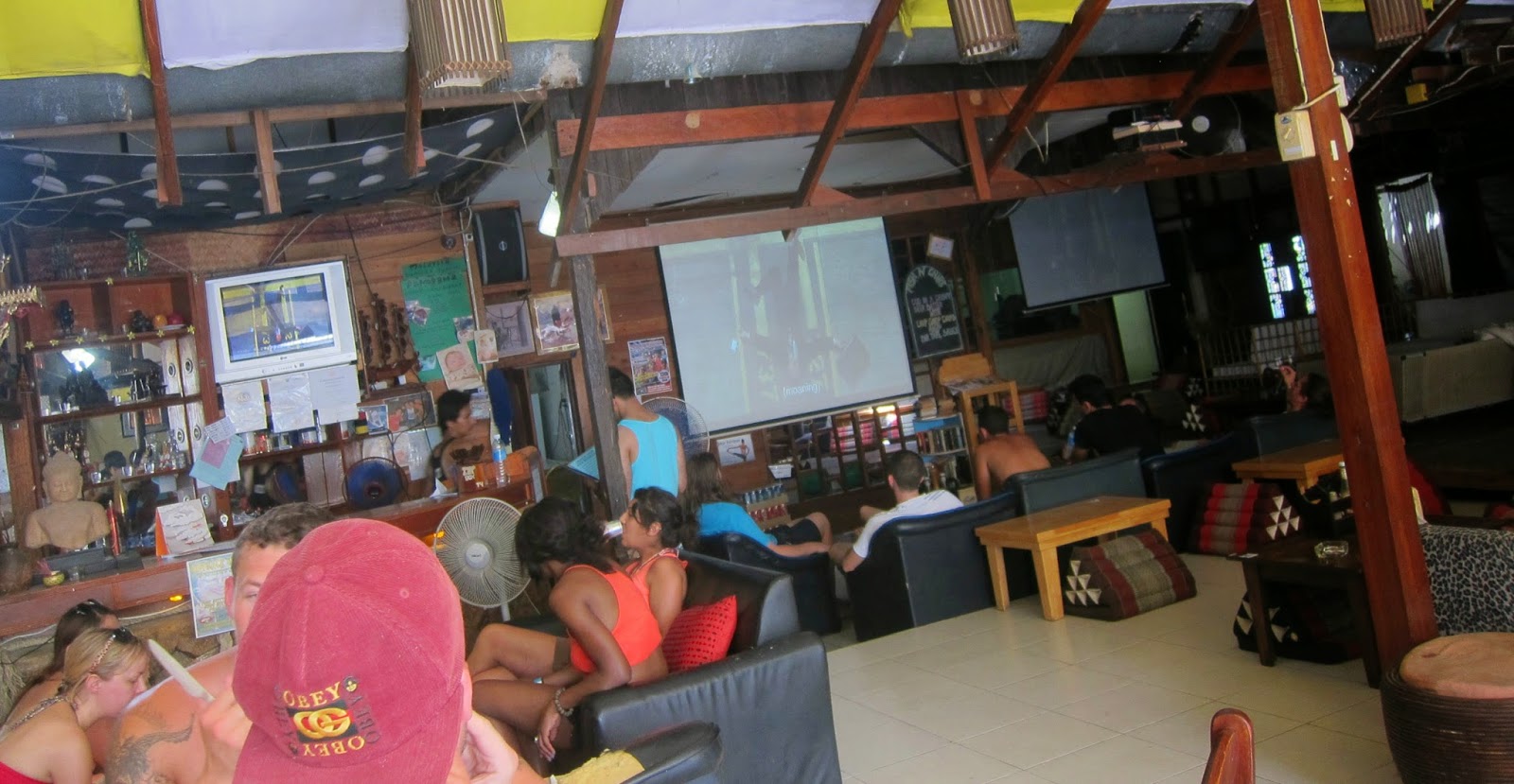 The restaurant offered breakfast, sandwiches, burgers, pasta, pizza, salads and Thai food on the menu. Prices were higher than your local restaurants.  Sandwiches and Thai dishes started at 140 THB and pasta and pizzas started around 200 THB.

During our stay, we tried many of the dishes.  I enjoyed all of them.  My favorite was the traditional English meat pie.  Prices and conversion rates based on April 2014


The Mo and I split the full English breakfast since it was massive.  The meal came with (2) Toasts, (2) slices of real bacon (1) sausage (2) fried eggs, beans, mushrooms, tomato, OJ and coffee

We also ate at the sister restaurant across the street once.  2 Lazy features the same menu but the restaurant is much smaller. 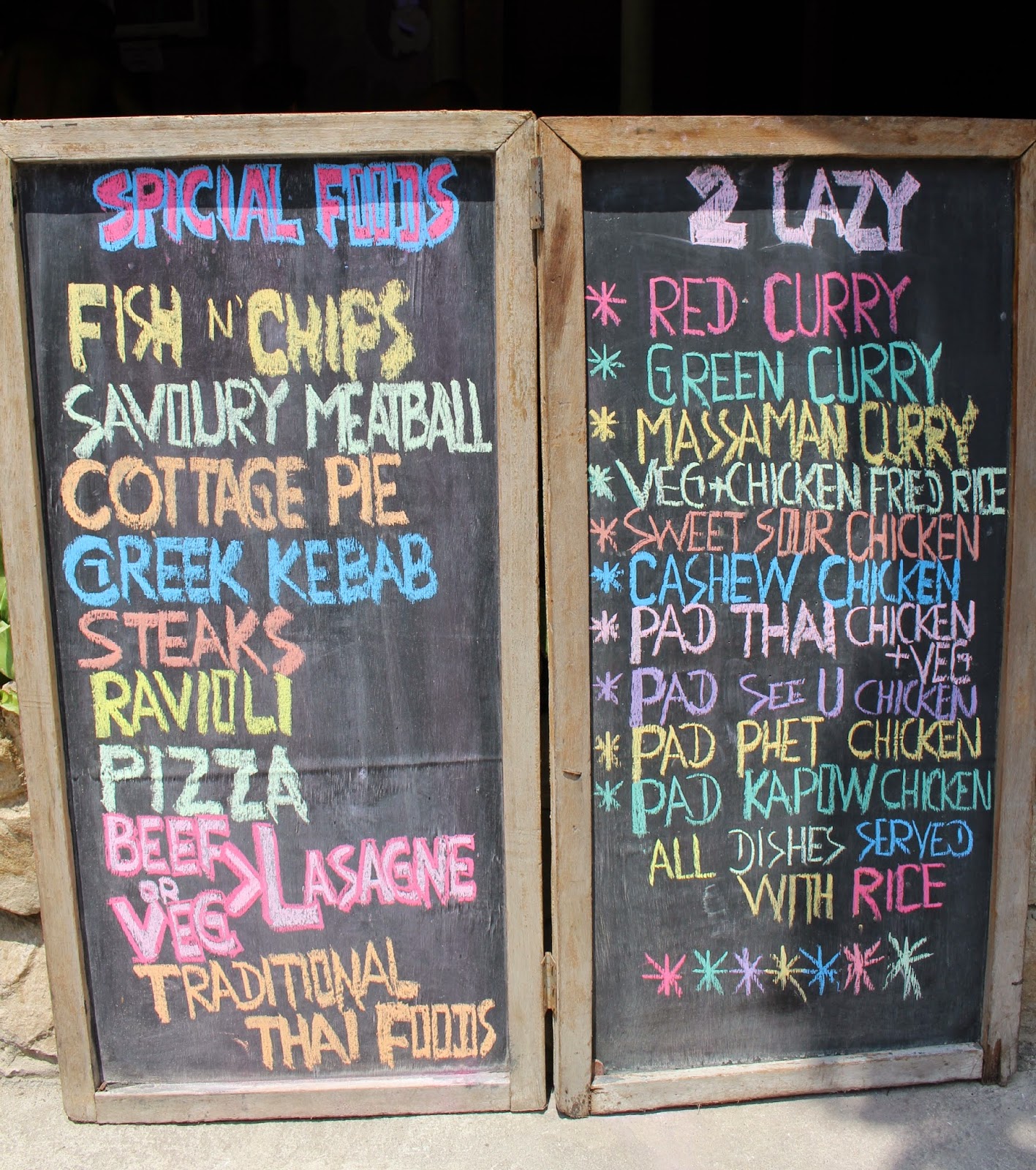 We had daily vouchers at the Aussie themed restaurant called the Outback Bar owned by the same "Lazy" Group.  We visited almost every night for vodka buckets.  I loved the decor and the seating areas. 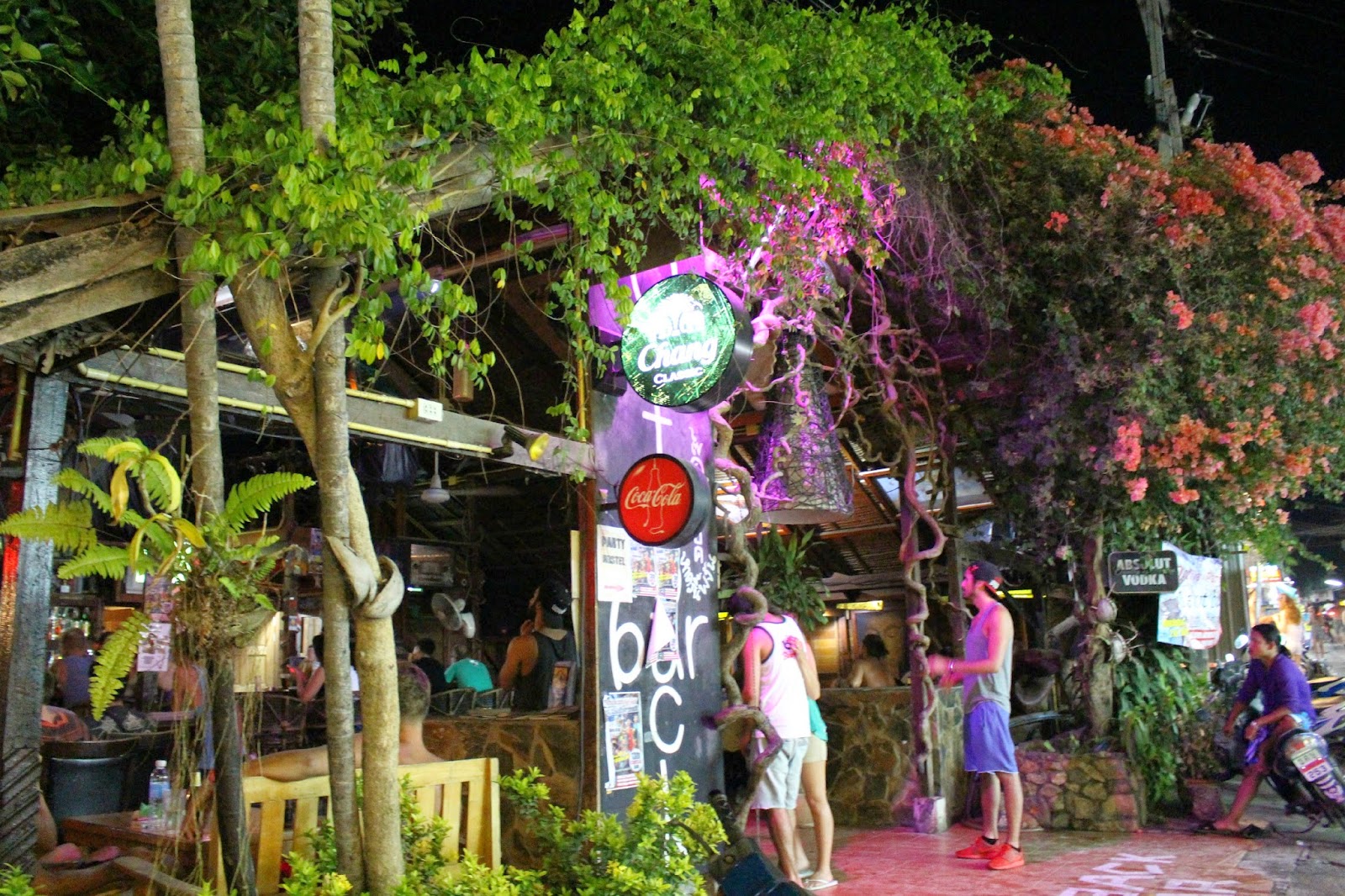 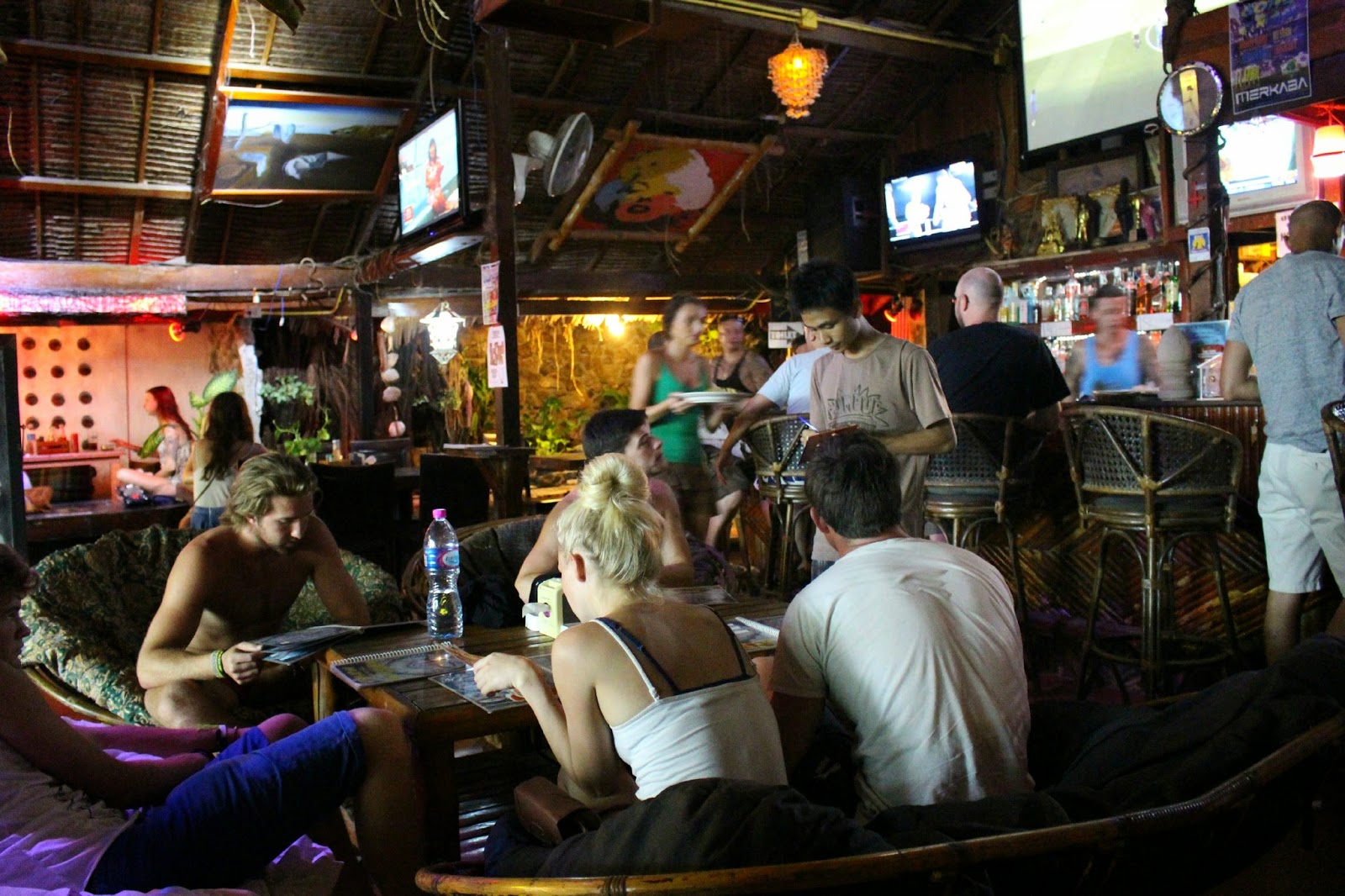 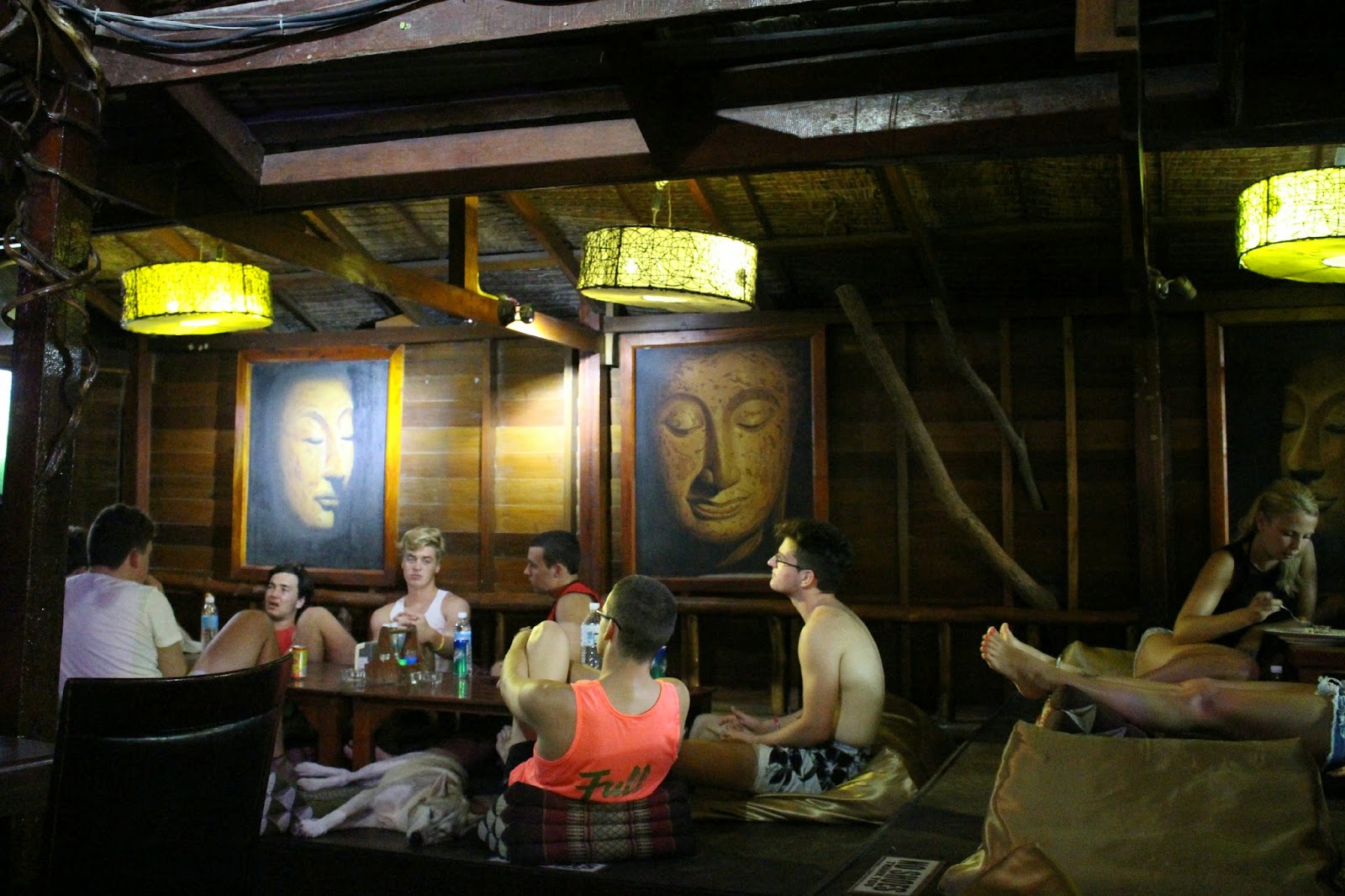 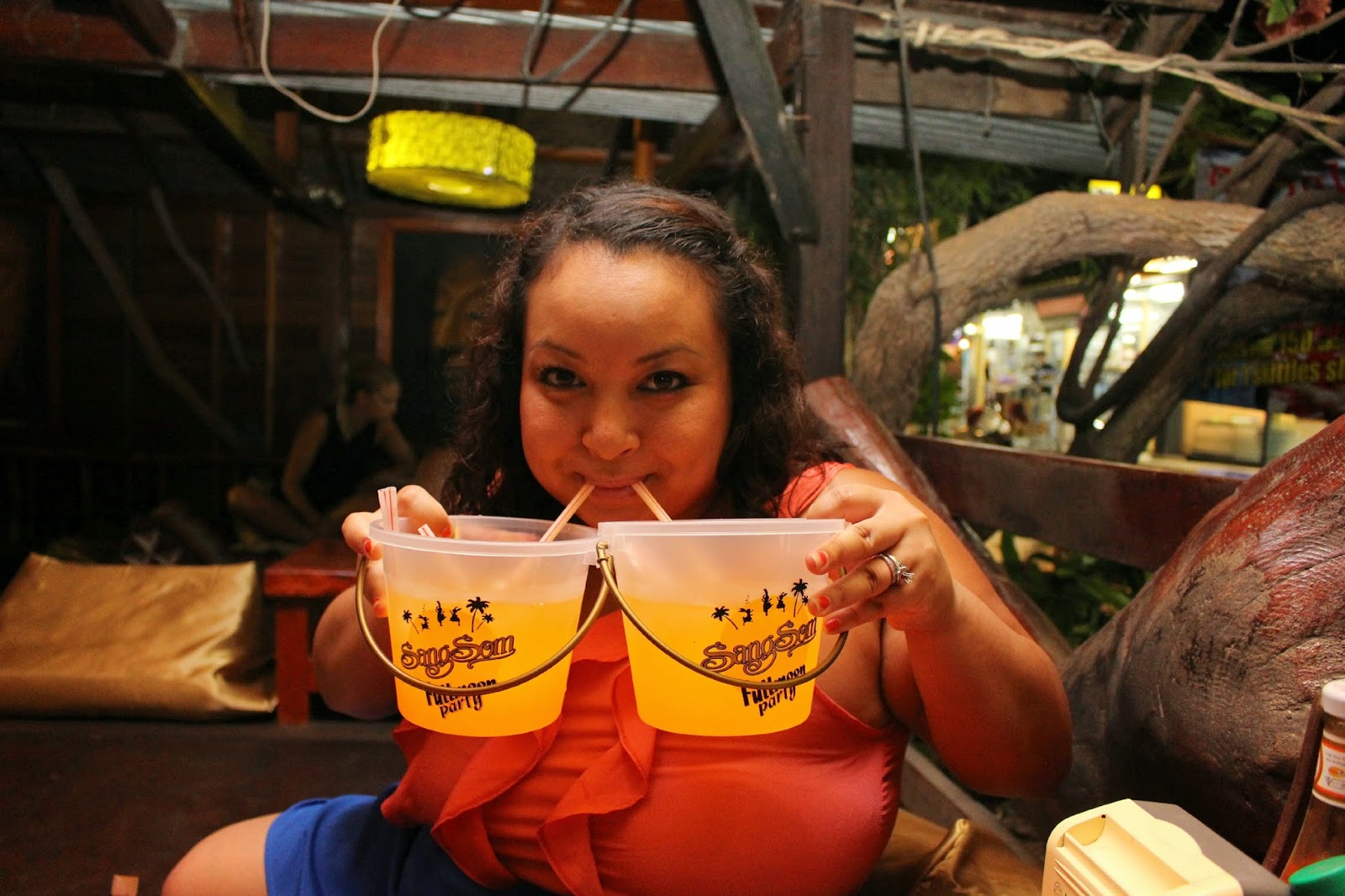 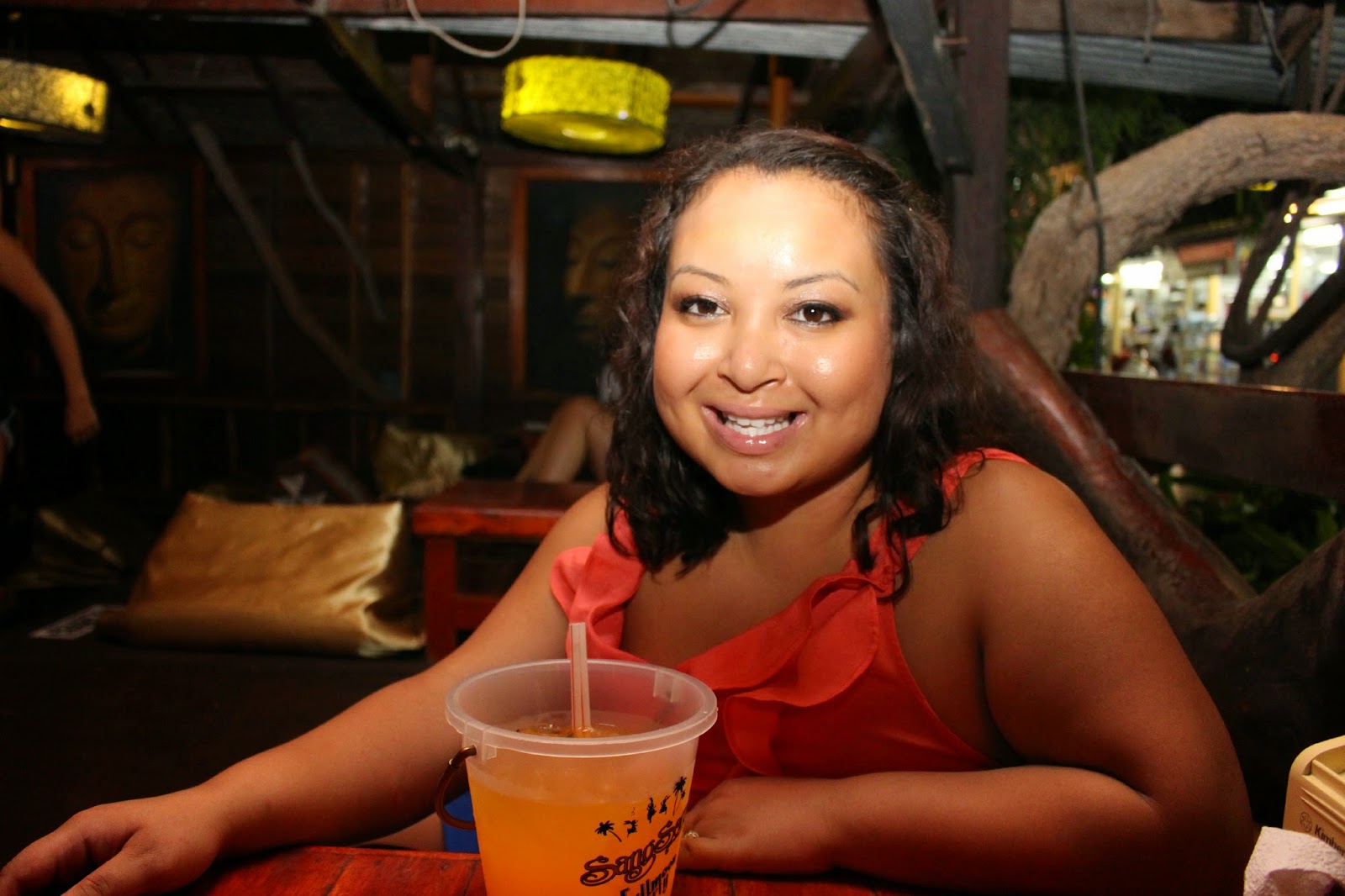 Om Ganesh, an Indian restaurant in Haad Rin also got wonderful reviews.  Many of the nights we were in town, the restaurant was full.  Their menu features set combination dishes with bread, rice, and staple entrees to sample.  We didn't want a heavy meal so we settled for some apps.  They were just OK.

One of the local places that we went to was, My Friend Restaurant. This was my favorite restaurant and I wished we visited more.  Service was on the slower side during the dinner rush because the restaurant was always at full capacity.

I loved that the food prices were really cheap starting at 50 THB ($1.55 USD) for complete rice meals and most importantly, the food was really tasty.  Although it's run by a Thai family, the menu also offers western dishes at affordable prices. 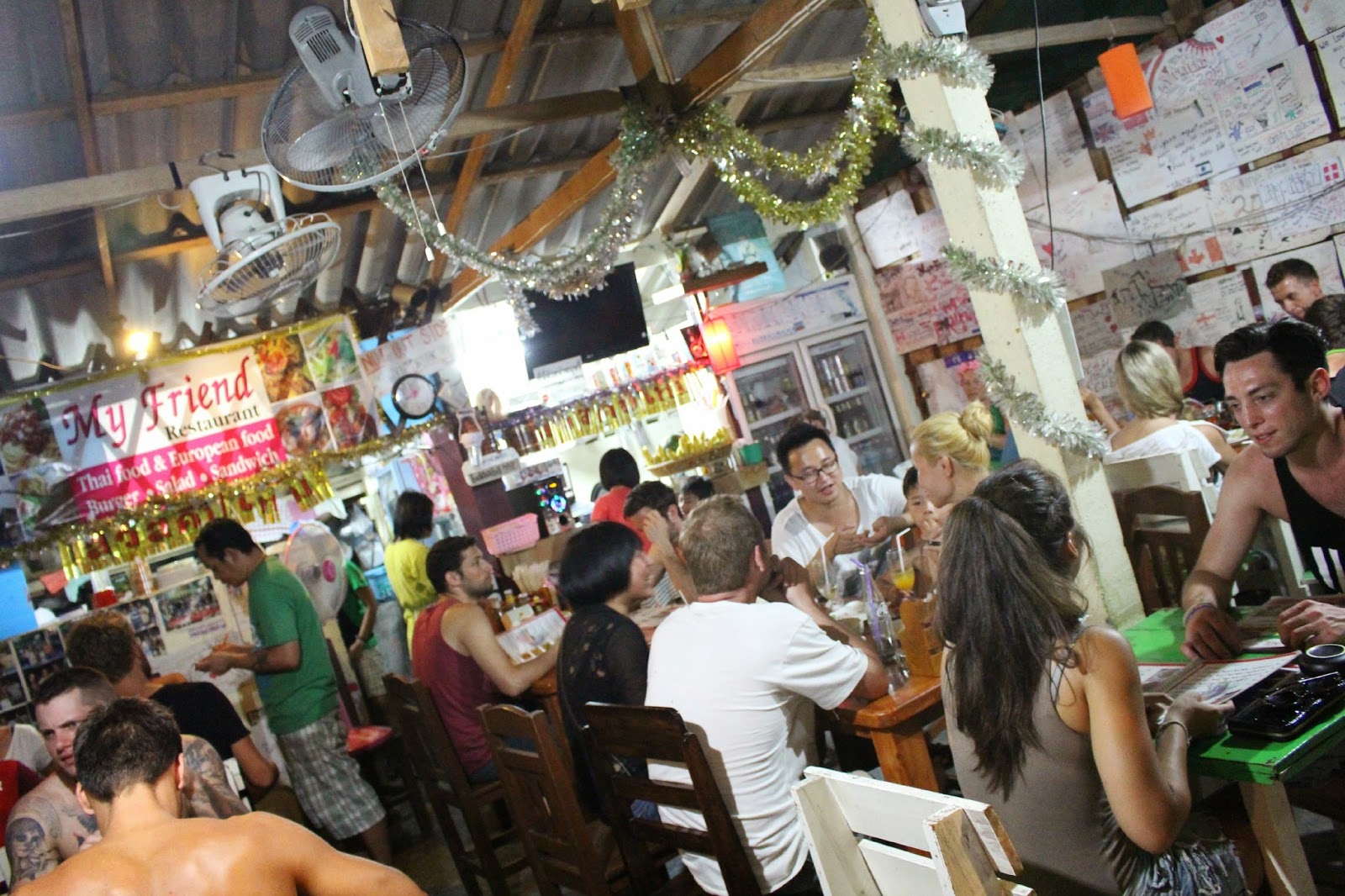 We visited a couple of local street-side "hole in the wall" type places during our trip.  I was under the assumption that the food would be less expensive than by the beach area but I was wrong.  I think they saw us coming and charged us tourist prices.  We paid the same price as we did at My friend's restaurant if not more for some of the dishes.  In some cases, we got ripped off. 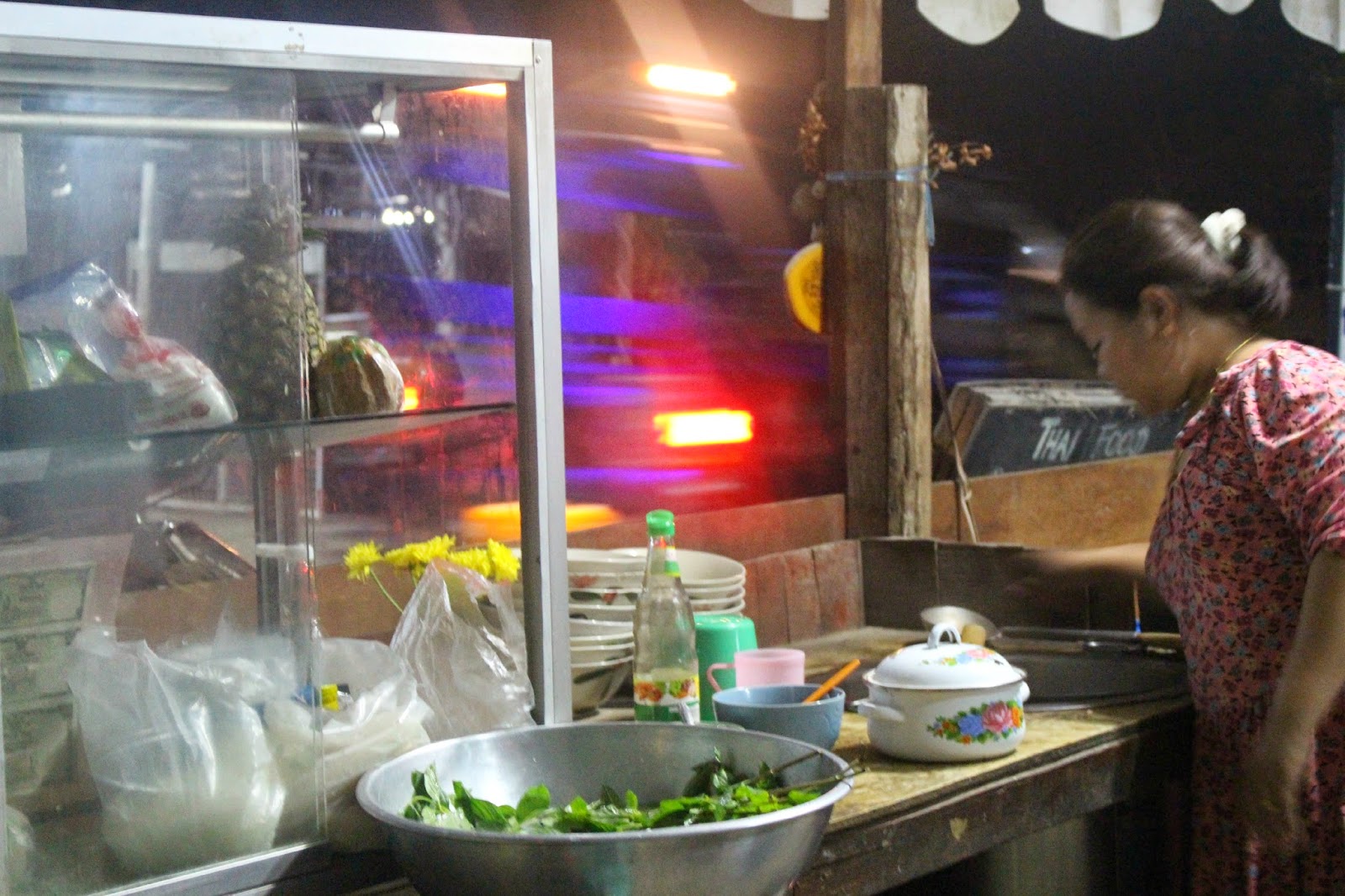 One evening, we ventured out to the beach after a couple of drinks to people watch.  Many of the food stalls and street vendors are in the beach area.  You can find egg rolls, schnitzel sandwiches, pizza, corn, doughnuts and meat skewers for a reasonable price. 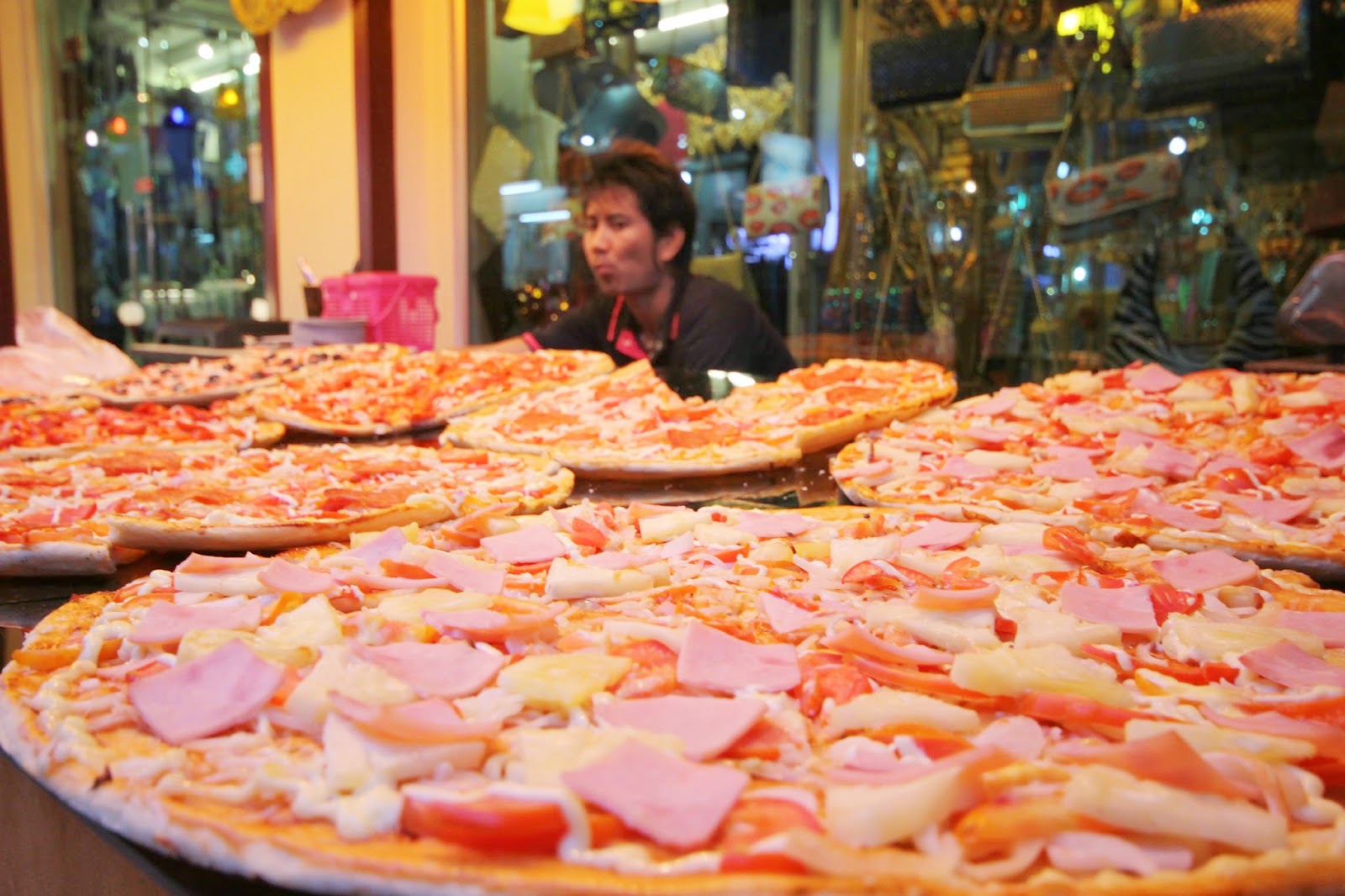 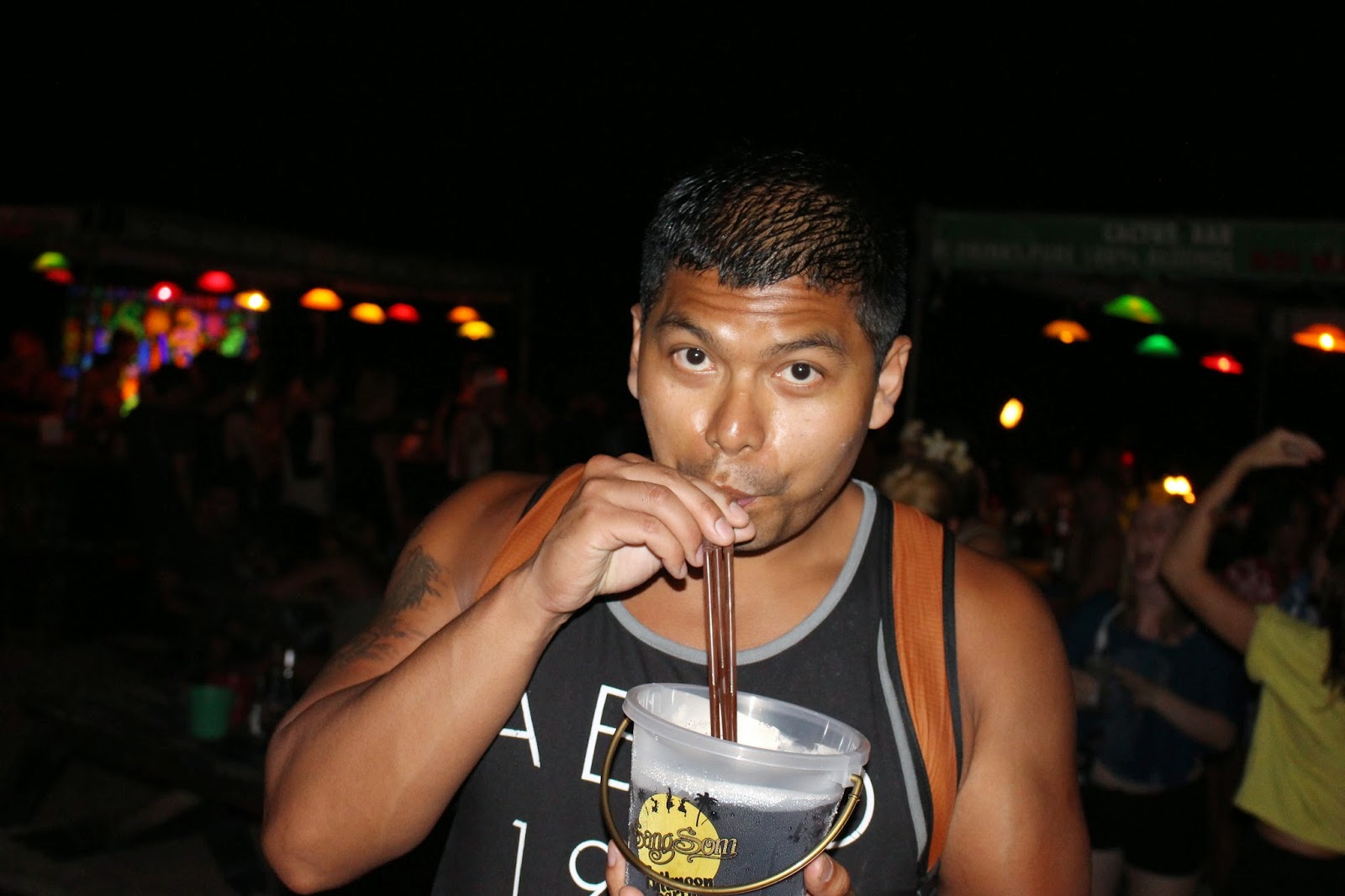 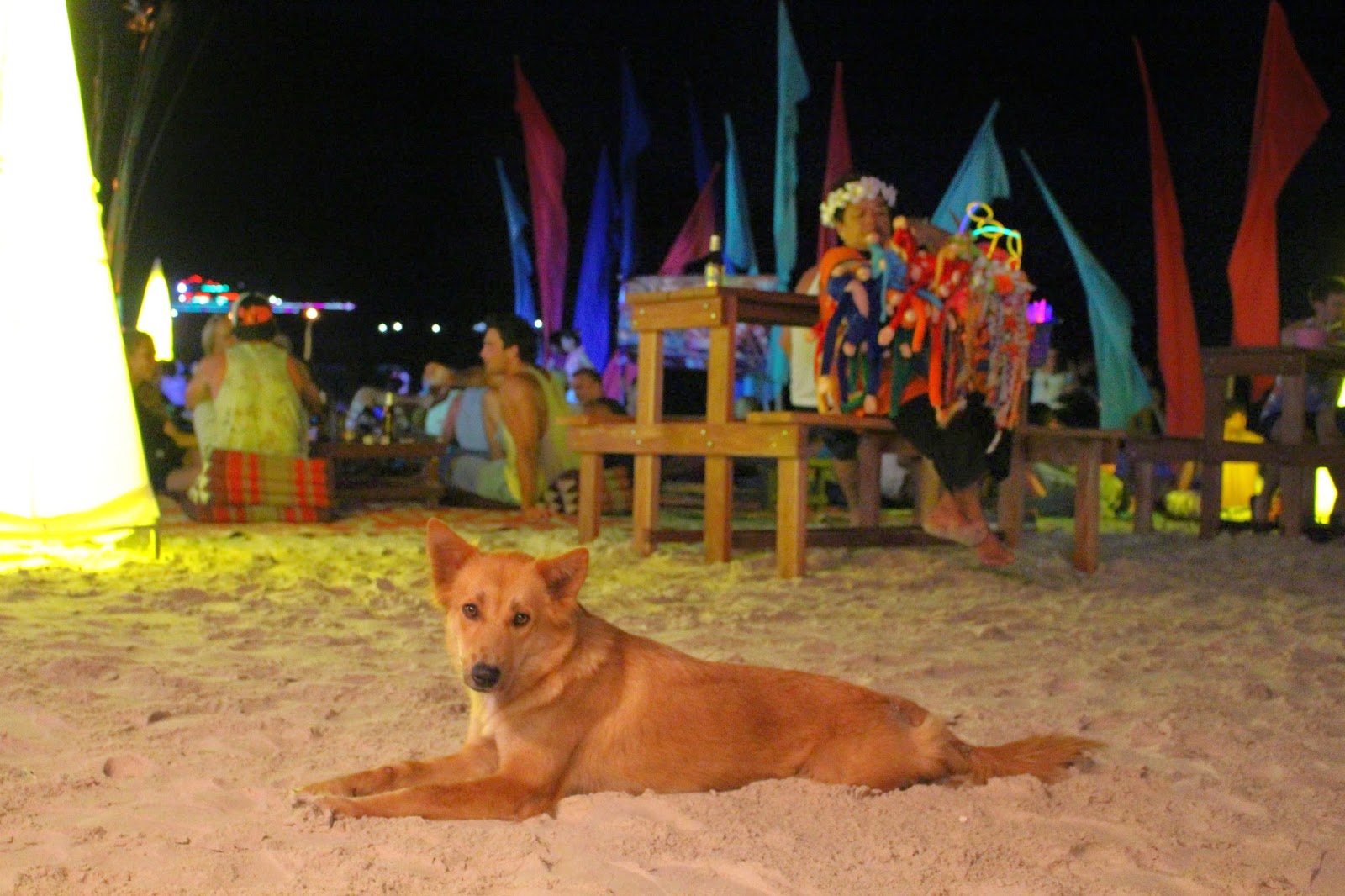 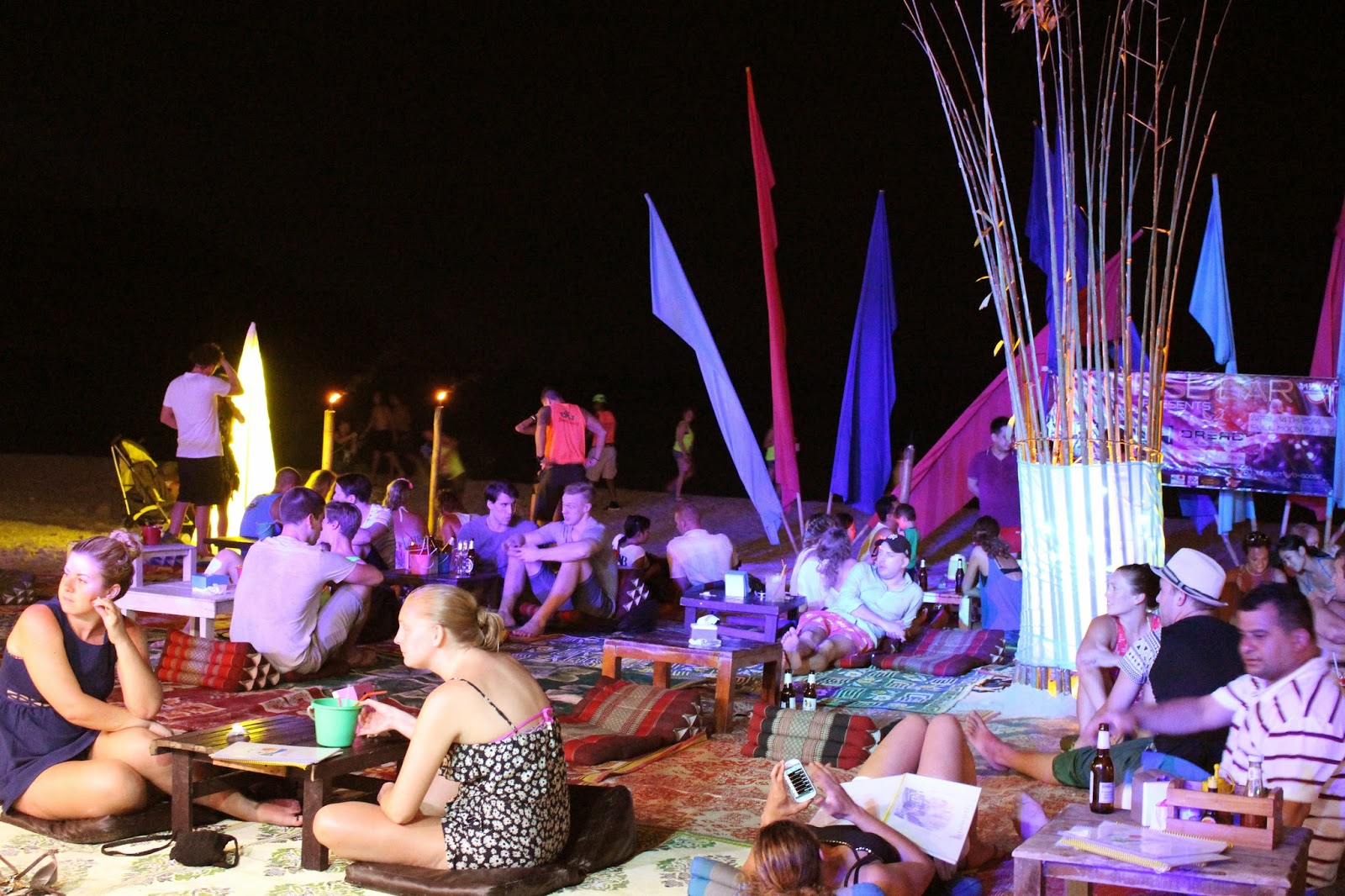 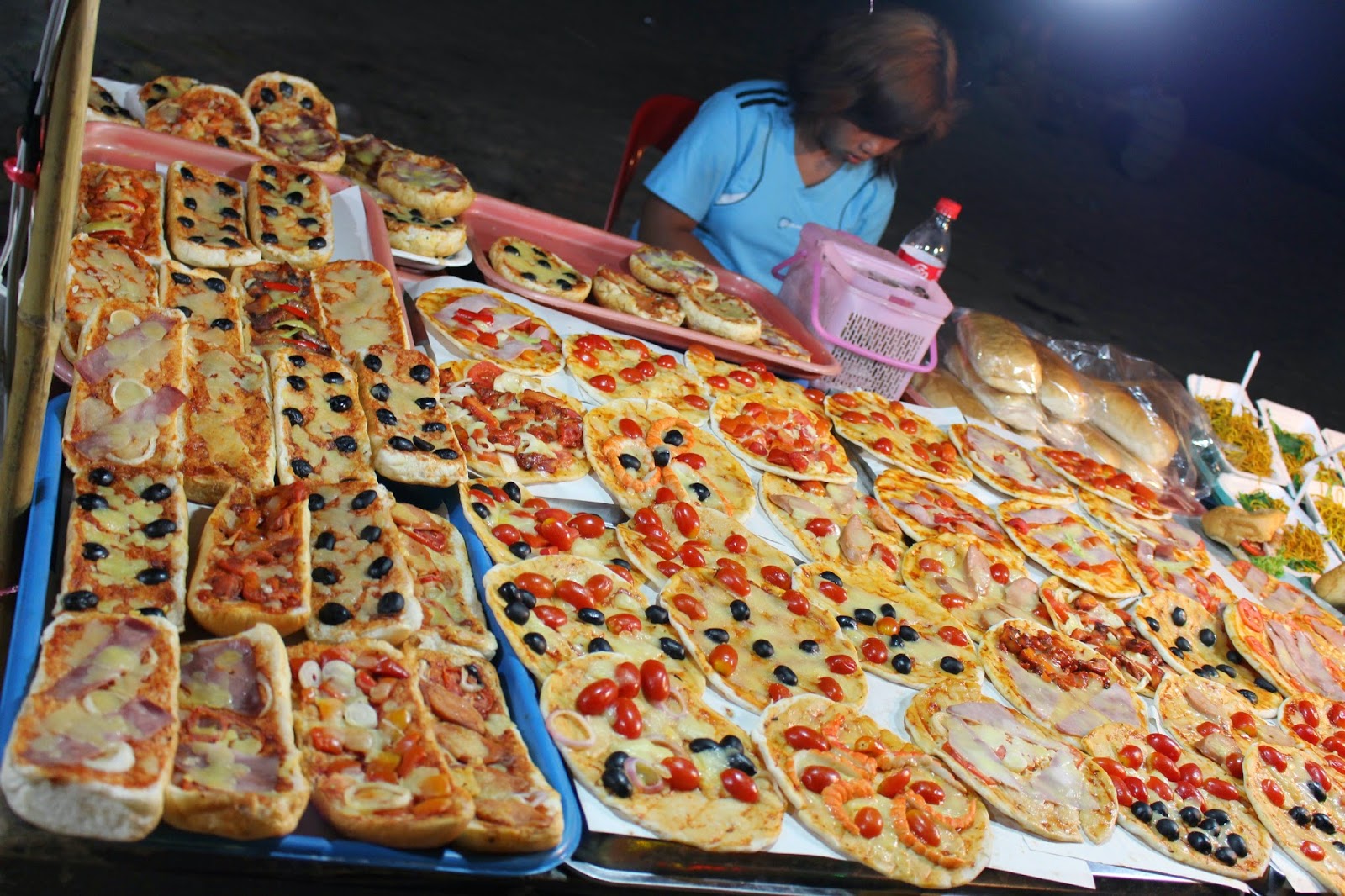 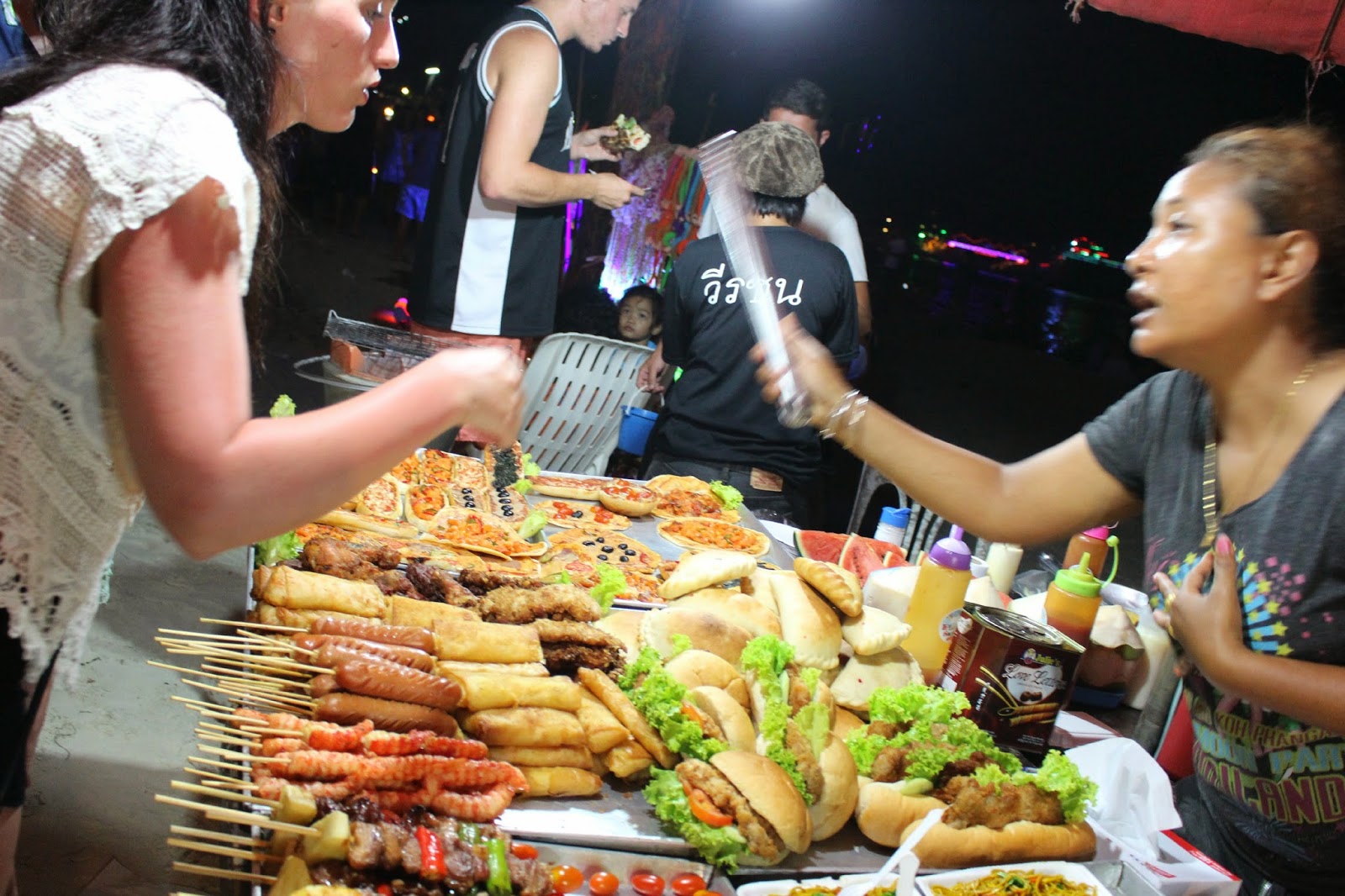 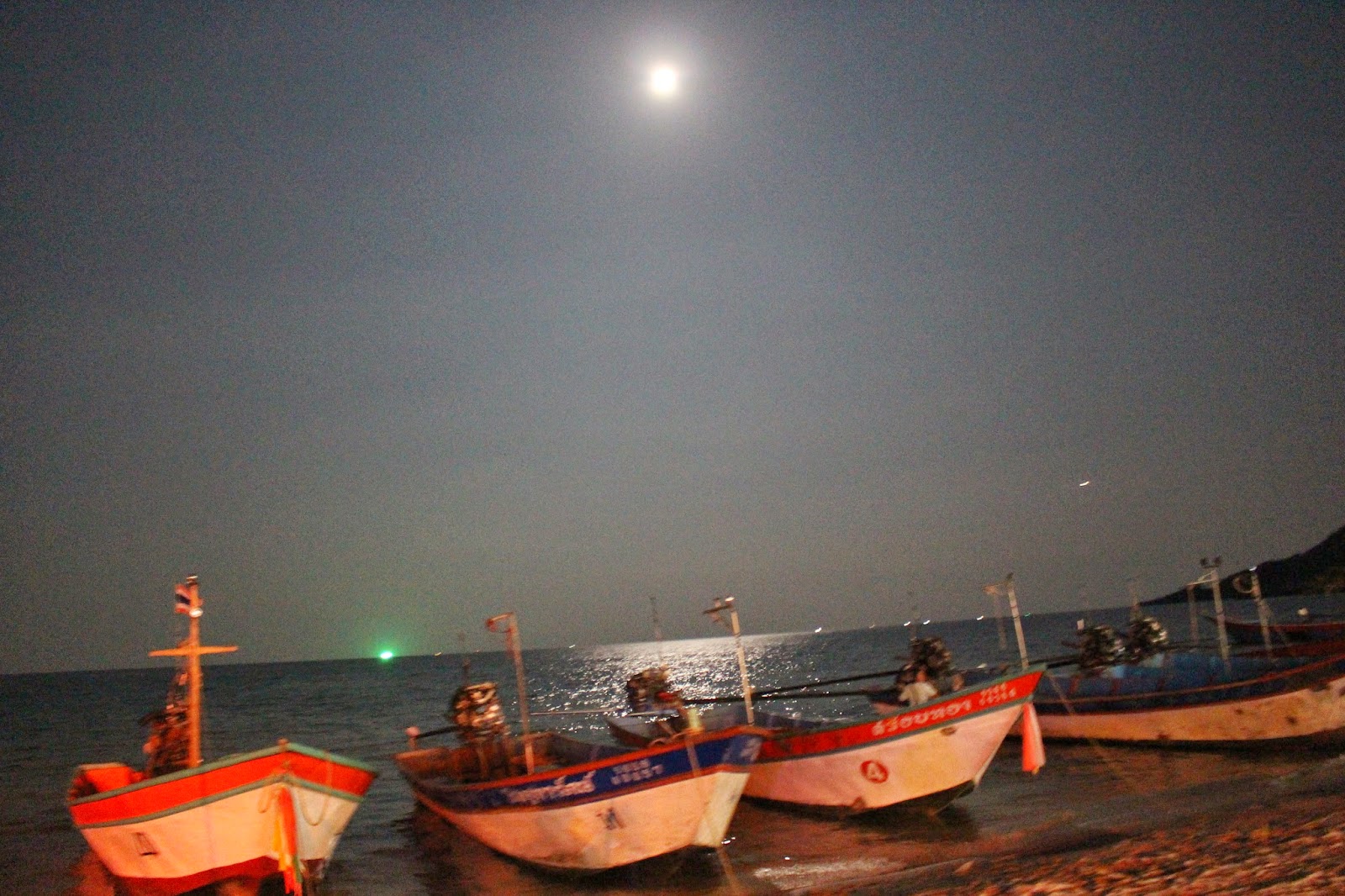 The best schnitzel I've ever had was at Mama's Schnitzel in Haad Rin.  A schnitzel is the German/European word for cutlets.  So in America, we would call it a chicken cutlet.  The place is always packed. The restaurant specializes in schnitzel sandwiches but also serves Thai food.  The Lat Na noodles we got wasn't that great.

Since we are early risers and breakfast isn't served until 10 AM, we headed to 7-Eleven for some steamed meat buns (bao's).  I was intrigued by the grilled panini sandwich stations so we tried a chicken pizza and a pork version.  They were good and only cost 28 THB ( 86 cents) each.  Pretty much, you pick out which sandwich you want, pay for it and the 7 Eleven worker grills it for you on the spot. 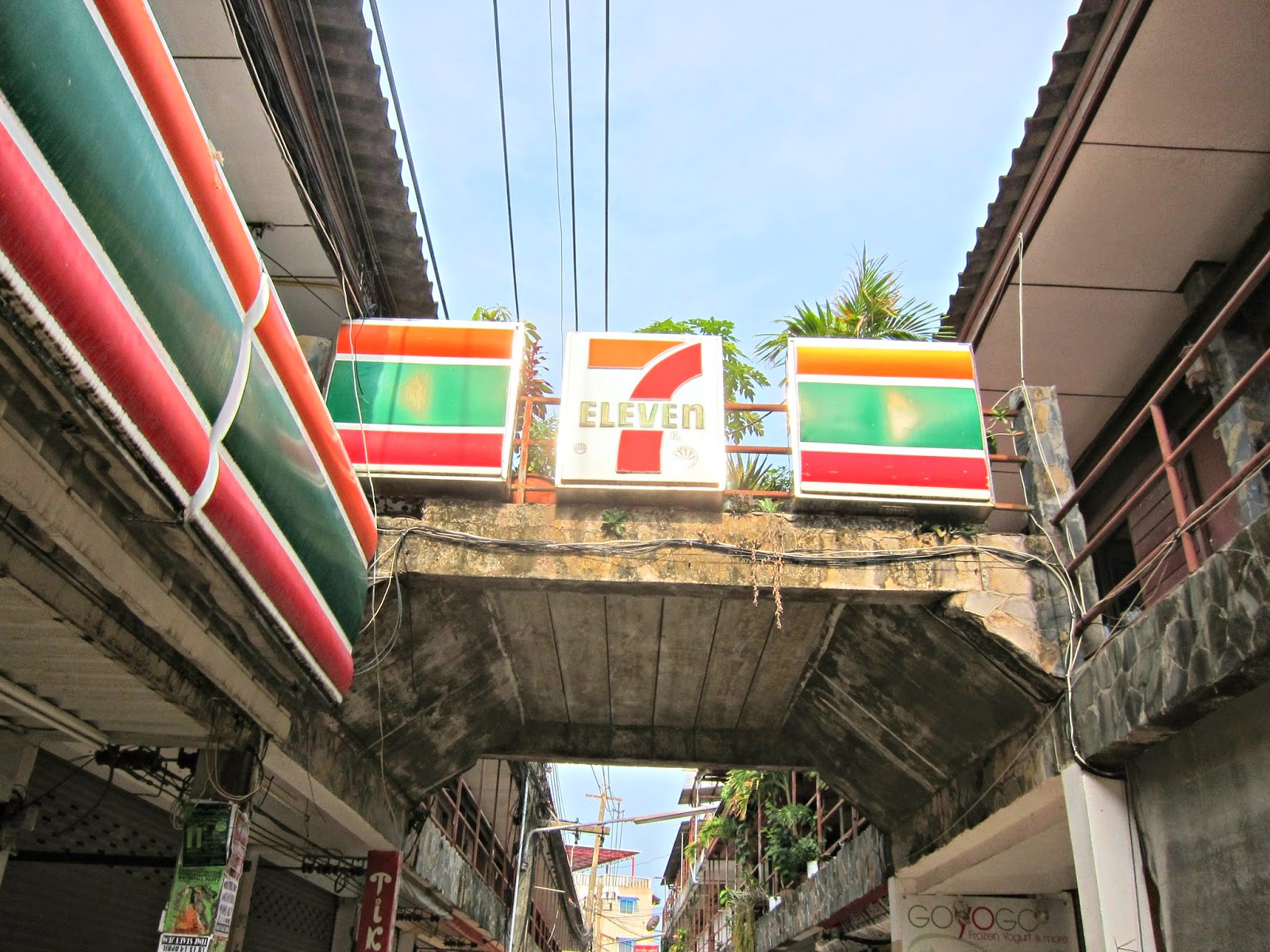 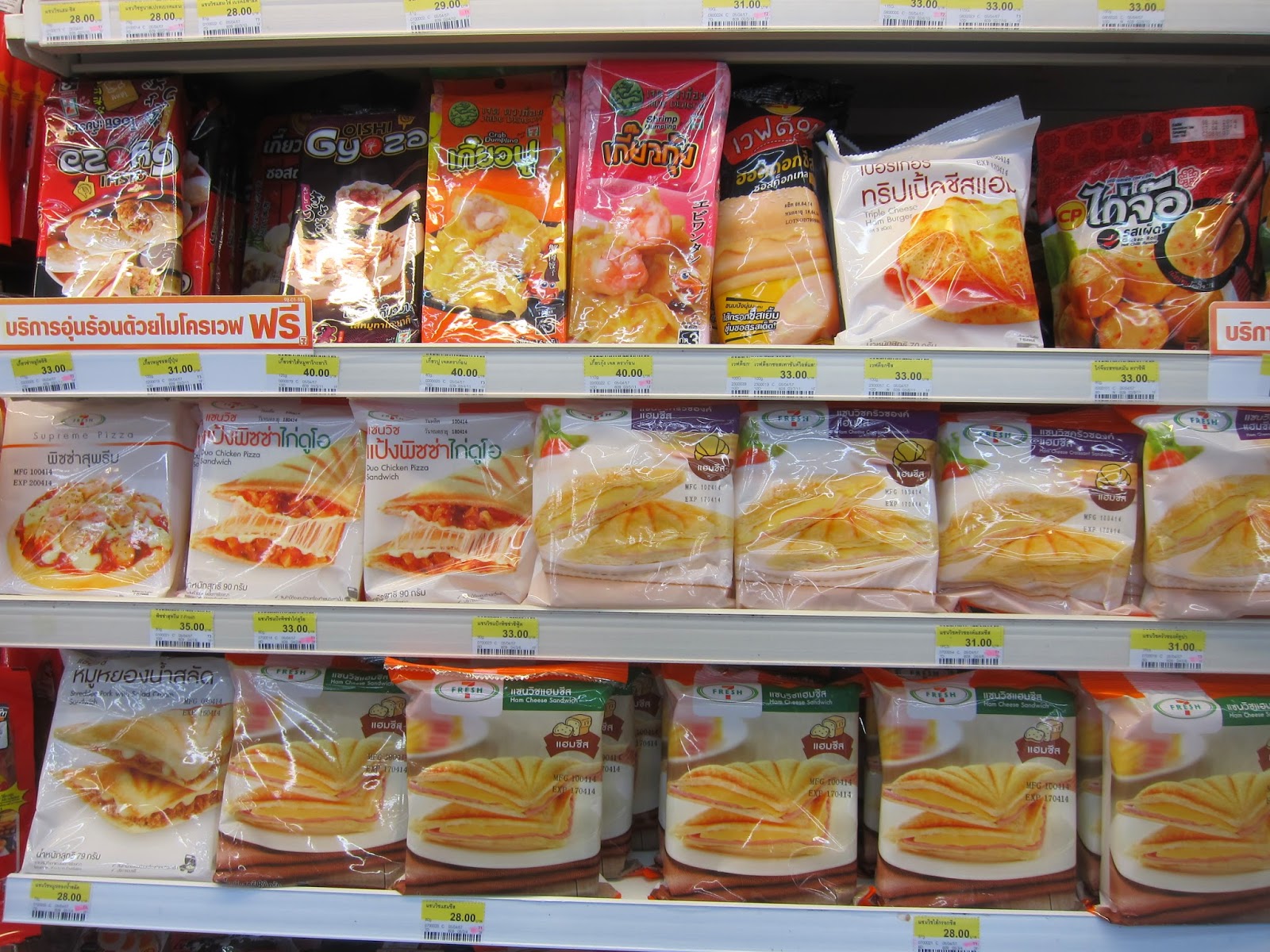 On our way back from Haad Salad beach, we stopped in Thongsala and went to Panthip Market for some snacks.  The lot is filled with food vendors selling roasted chicken in clay ovens, sushi and meat skewers.  Almost everything is between 10-15 THB ( .30 cents - 46 cents USD) per piece. 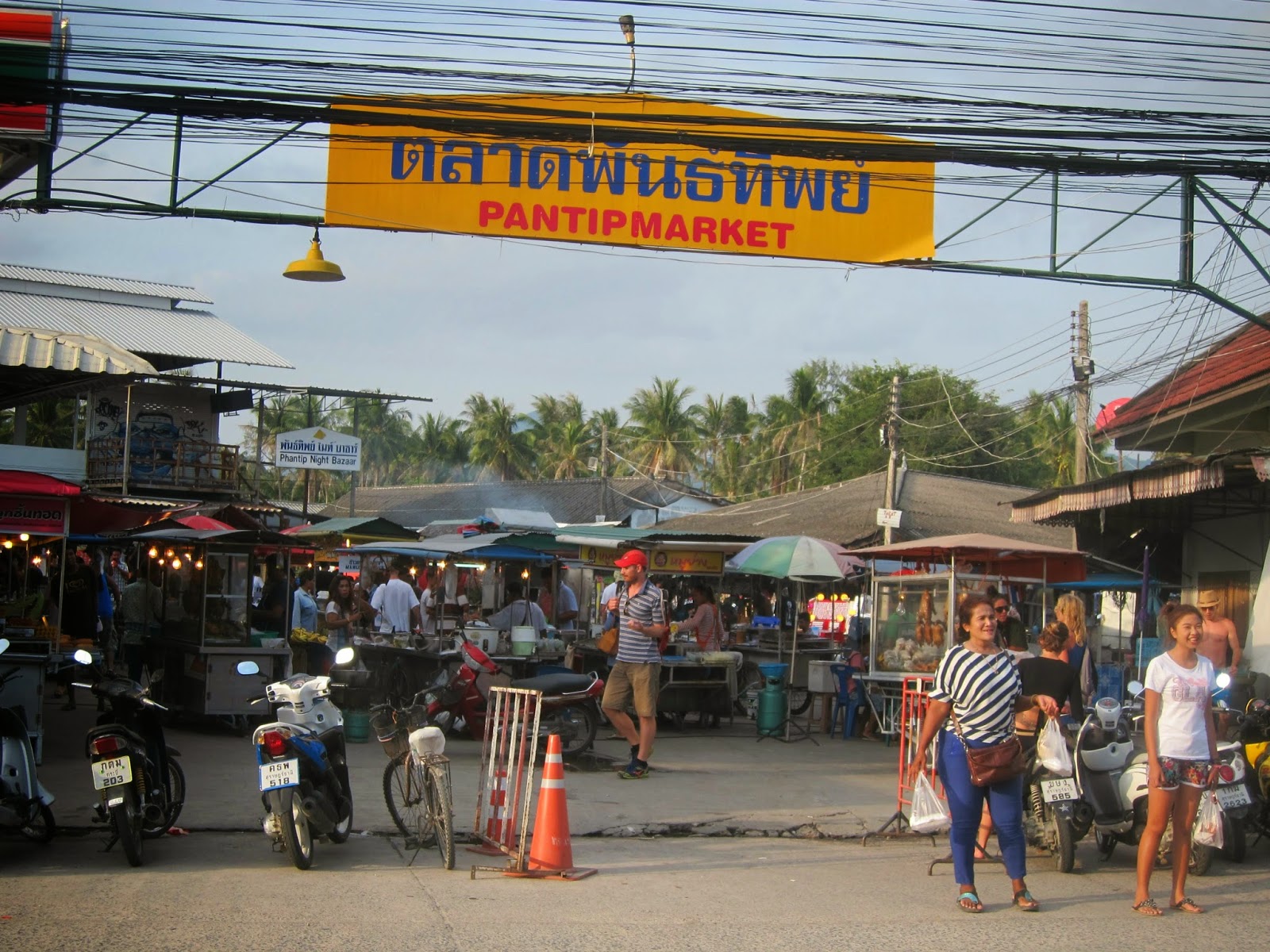 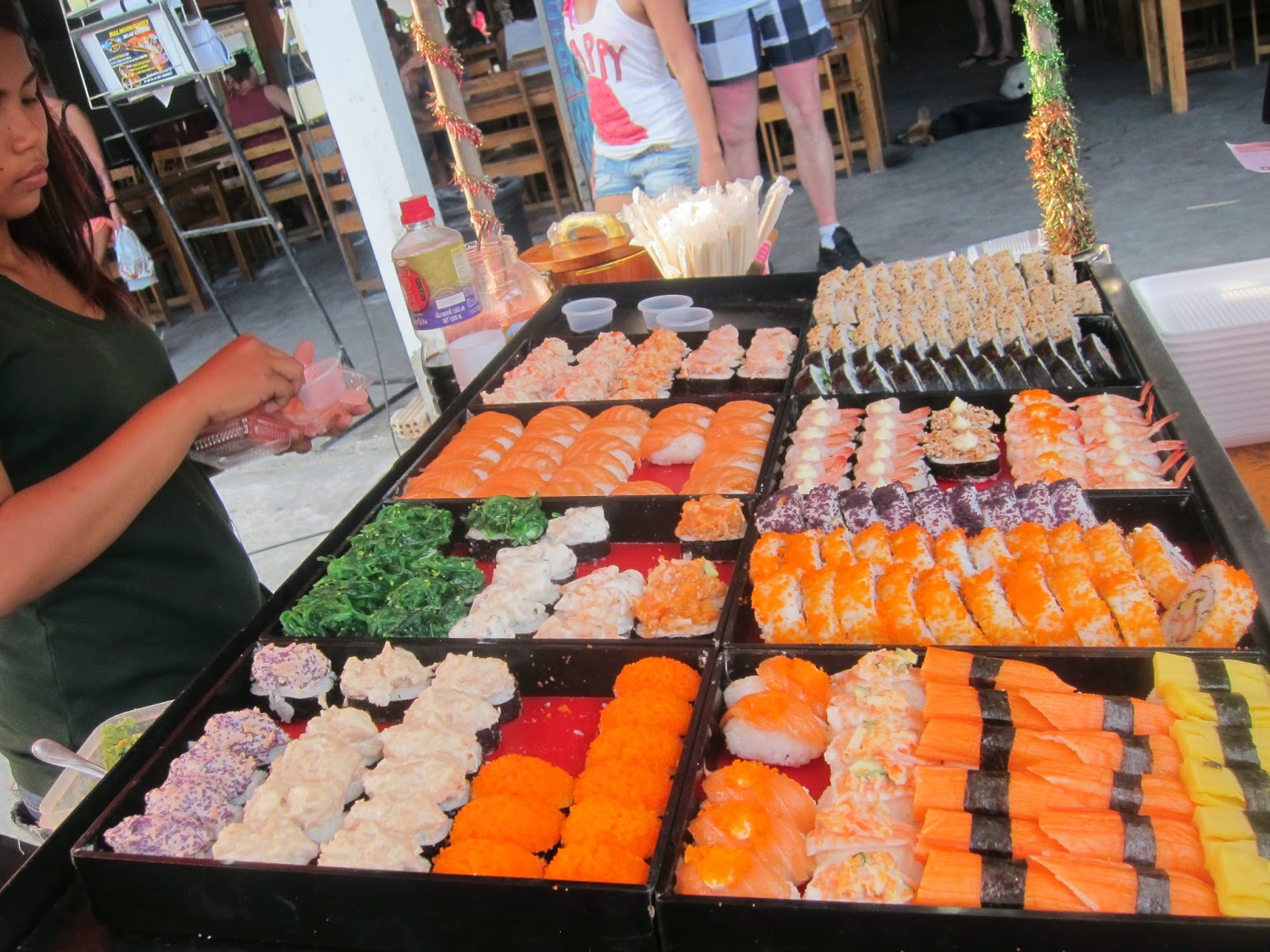 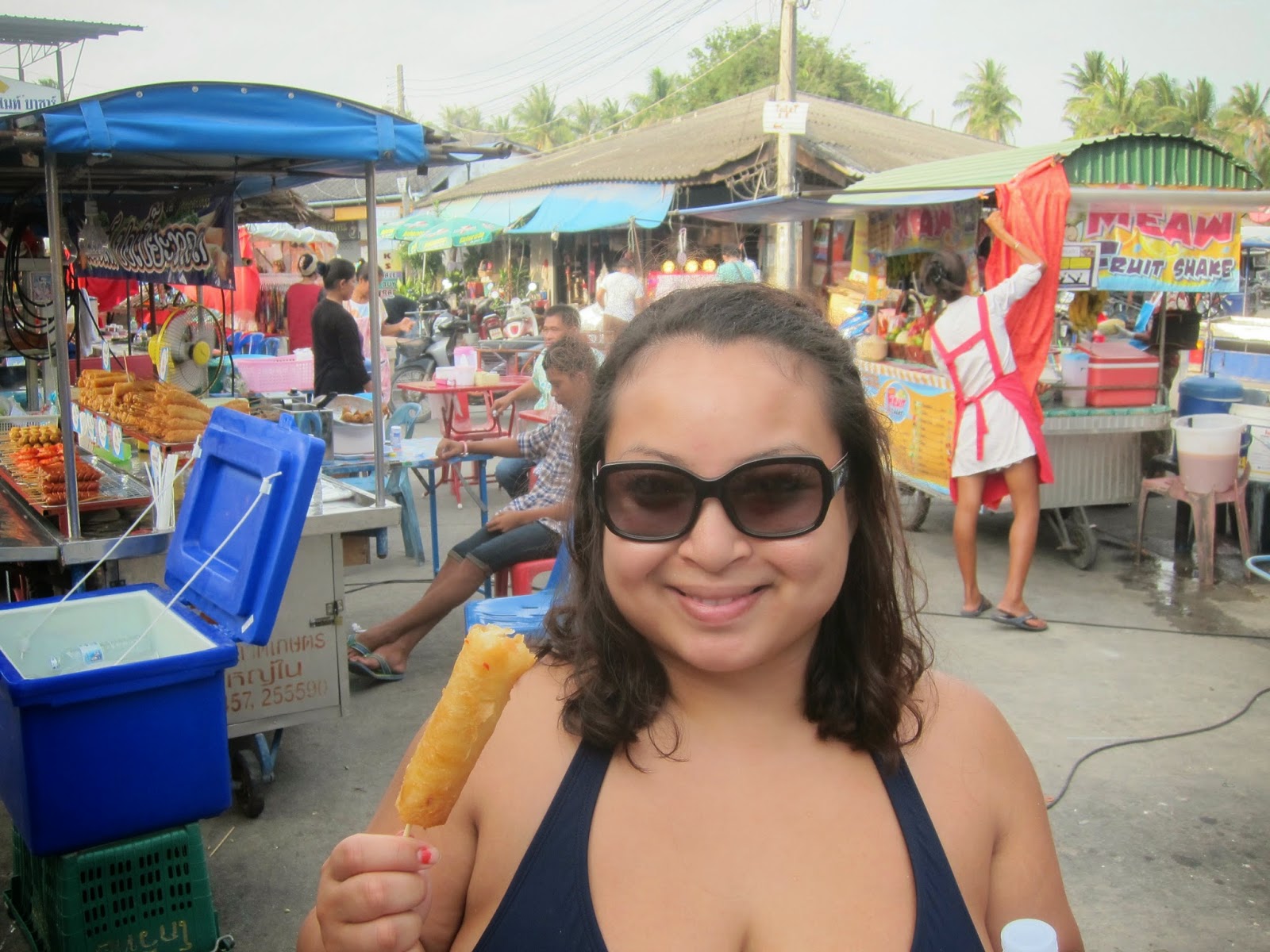 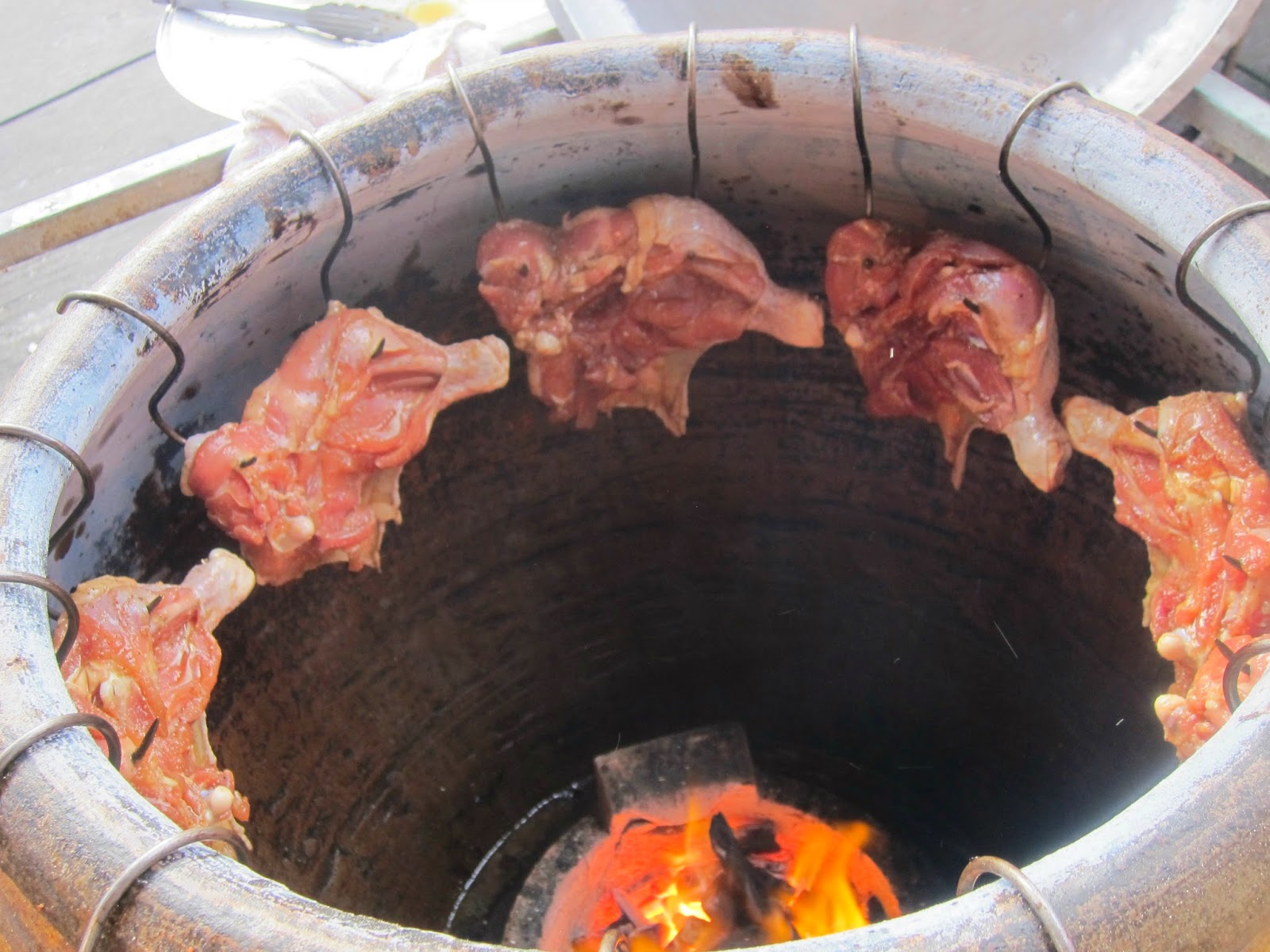 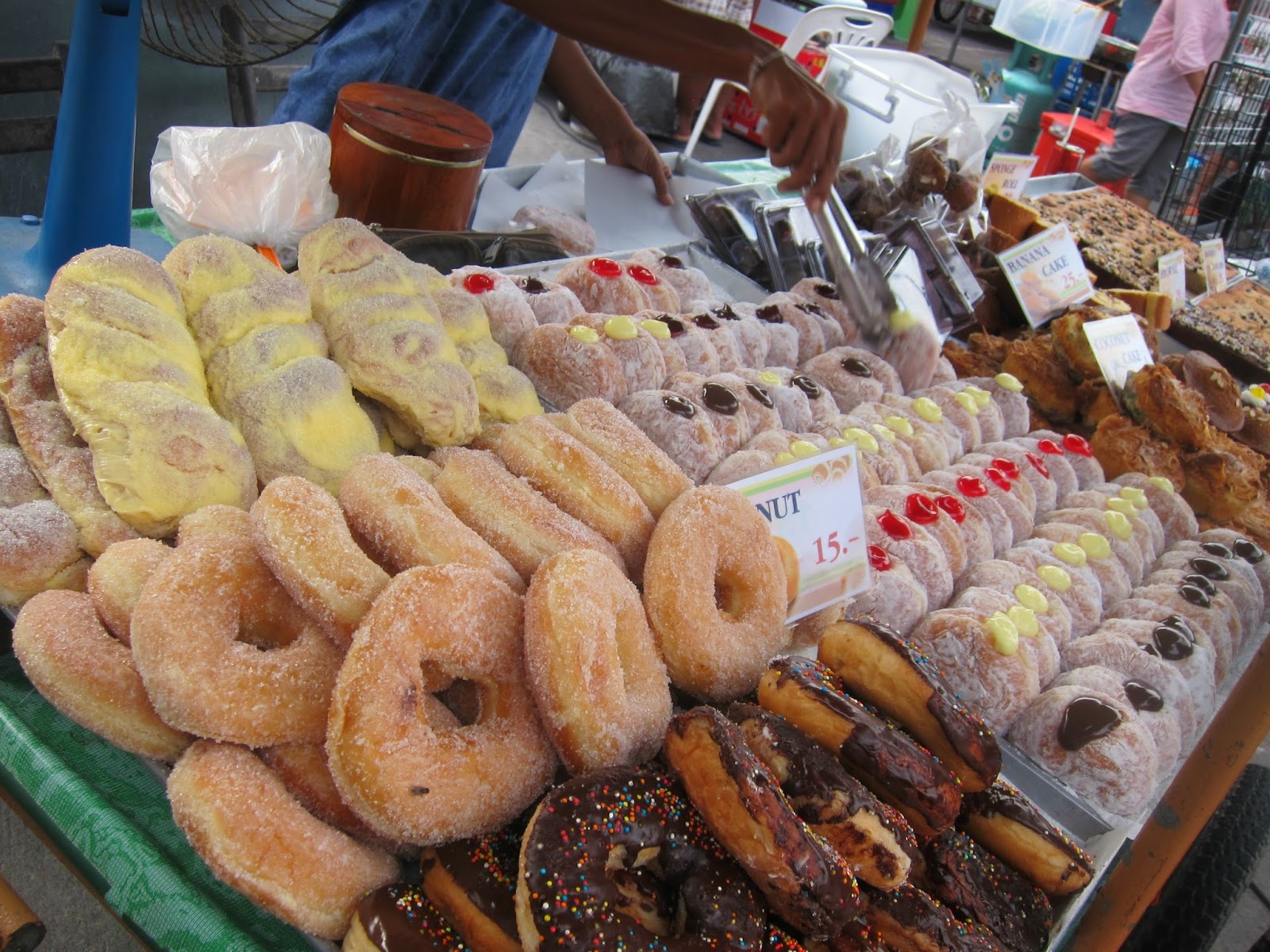 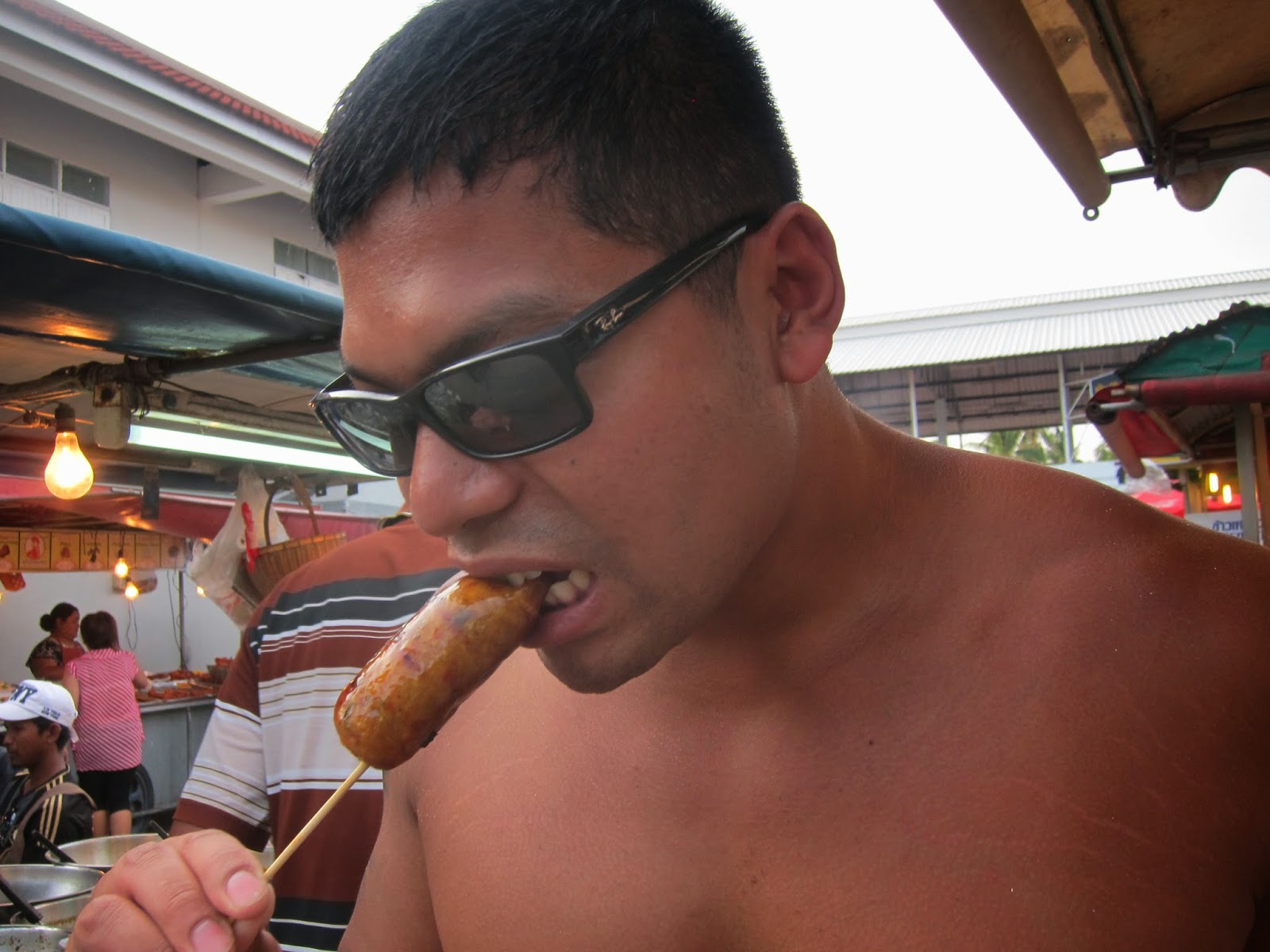