After a long plane ride back from Thailand, my sister wanted to do something nice and take the Mo and I out to eat after our arrival at JFK airport in New York.  With the airport within close proximity to Korean town, we headed over to Sik Gaek.  My sister and her husband had been there before and liked it.  They learned about the restaurant through an episode of "No Reservations" with Anthony Bourdain that recently aired on cable t.v.  The restaurant is known for serving live octopus in large table side hot pots.

We did some grocery shopping at the nearby Korean supermarkets where I stocked up on Chinese sausages and cut and cleaned calamari.

When we finally arrived at the restaurant, there was a sign in the front that advised, due to the season, there was no live octopus.  That was fine, I didn't know how my stomach would react to it anyway.

Since we were there for lunch, we were promptly seated by the funky outfitted staff with headbands and aprons.  The restaurant decor was tacky but also fun.  The lighting was slightly dimmed and the seating consisted of mostly booths.  Immediately, we were served sunny side up eggs that were cooked table side, before we even saw the menu.  The eggs were on the house.  We got 2 jugs of water that were self serve.

We ordered the seafood pancake as an appetizer and the seafood and rib eye hotpot along with Kimchee fried rice and beef fried rice.  Everything was delicious!

I've never had anything like the seafood pancake.  It slightly resembles the scallion pancake but it was thicker, fluffier and filled with seafood. 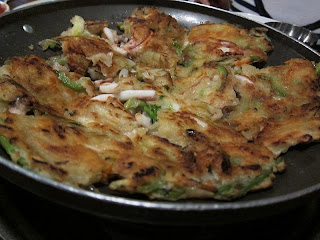 As simple as a fried rice dish can be, the fried rice here was extraordinary.  It was full of flavor.  The beef fried rice was made with shaved rib eye beef and not the usual sliced beef that is common in Chinese or Thai restaurants. 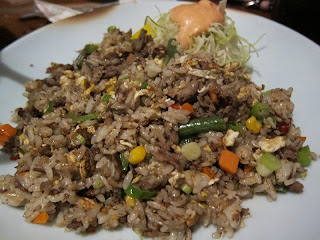 The seafood/ribeye hotpot consisted of clams, mussels, shrimps, lobsters, snails, octopus, beef ribeye cooking on a bed of beansprouts and udon noodles. It was served with a side of kimchee and "Gilghuri Tteokbokki" basically seafood rolled noodles and fish cakes in a red paste sauce.  The consistency of the paste sauce was similar to spaghetti sauce.  The staff provided plastic buckets under the table for us to throw away our seafood shells, which was a nice touch. 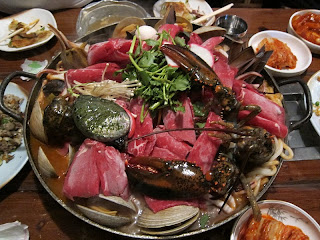 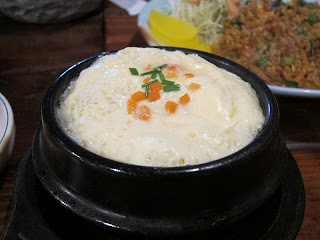 Since one of the waitress spilled water all over my niece, we got a free bottle of Soju, a Korean distilled beverage similar to vodka.

Overall it was definitely a unique and fun dining experience!