The glory of Bangkok Thailand, Day 2


We had a jammed-pack day today and tried to cover as much as possible, that being said, I'm not too proud of our expense report for the day.

After having a good night's sleep on an actual bed (which beats sleeping on an airplane seat), we were up at the crack of dawn, ready to explore the city.

First, we took a scenic river cruise on the Chao Phraya River Cruise and took pictures of the famous Wat Arun and Wat Phra Kaeon from a distance. I'm ashamed to say it but the Mo and I lack an appreciation for history, art, and culture. On our last trip to Cambodia, our tour guide advised that the tour of the ancient temples of Angkor Wat would last about four hours but we were in and out in less than 45 minutes. We pretty much just went to take pictures to show that we were there.

Our first stop was Chinatown. I must say, Chinatown evokes the same feeling regardless of its location, whether it is be New York, Boston, or Bangkok. 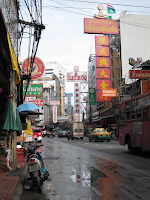 The familiar aroma of roast BBQ pork and duck fills the air while the streets are full with vendors pushing their Louis Vuitton knockoffs, dried mushrooms, and gold cat figurines with the waving paws.

We spent a good amount of time walking through the various side streets and alleys before we decided to grab some dim sum for breakfast. Most of the restaurants did not serve the delicious Chinese morsels until 10:00am so we found a nice little alley cart with lots of dim sum offerings. To my surprise the vendor was Cambodian and not a local Thai or Chinese. Nice to know that Cambodians can cook up a great authentic dim sum meal.

The Mo and I shared some shrimp dumplings, fried shrimp and tofu, and fish patties for breakfast, setting us back only $3.00. We are used to spending closer to $35.00 in the States for dim sum..but of course we always over order.

We stopped by the local grocery store to check it out and was surprised to see that one can eat a meal of rice and fried eggs for about 30 cents.
After a boat ride and a long walk back to our hotel, I decided to pamper myself with a manicure and pedicure, setting me back less than $ 9.00 total. I know most of you are questioning the hygiene of the establishment but it actually was decent. I watched the girl clean and sterilize the tools and switch blades on the heel scraper.


We set out to find me a hair straightener since my Chi blew the circuit in our hotel room. I needed one that was 110v. We headed towards MBK mall, a large mall consisting of eight floors, a movie theater, bowling alley, karaoke bar, and much more. The Mo was very excited as he boasted that the 4th floor electronics area was a nerd's "dream come true" with all the electronics and accessories that was offered.

After walking around several levels, we decided to grab lunch. That was a dilemma within itself. There were so many different foods to choose from ranging from high grade fresh sushi to the international chain food restaurants like McDonald's and Burger King.

The Mo and I walked past a busy restaurant filled with locals and westerners. We thought we would give this place a try since it was so packed. The restaurant was called Kanom Chine Buffet, it was pretty much a rice vermicelli noodle buffet. There was one type of noodle and 6 different sauces to choose from. Toppings included Morning Glory, Lotus Blossoms, dried fish, garlic, ginger, dill, just to name a few. The meal came with a sweet banana in coconut milk dessert. The meal was well worth the price at only $2.50 per person.

We headed back to the hotel and decided on taking a nap by the roof top pool. The Mo went for a dip while I proffered to lounge. The Mo couldn't keep his eyes off the female European topless sunbather.

It was a nice day. Since Bangkok is currently going through the monsoon season, we were expecting lots of heavy rain or cloudy skies, but it was a really hot, humid, and sunny day.

Napping by the pool wasn't enough so we decided to take another nap in our room, I mean we were totally exhausted from all that walking!

Four hours of napping goes by and we decide to head out and walk the streets of Khao San Road and its nearby streets. Throughout the night, we saw fire dancing, lady boys (Thai transvestites or draq queens) and lots of Westerners, mostly from Europe.


We decided to indulge in his and hers foot massages that costs about $3.00 per person for thirty minutes. Nothing beats having your feet massaged while sitting back and drinking a large Singha beer in one hand and checking Facebook updates with the other hand. The massage was very good and the Mo commented that his foot and ankles were cracked in ways he never knew could be cracked.


We got hungry and decided to eat a late dinner at a restaurant called "Suk Sabai", this phrase is used in both the Thai and Khmer (Cambodian) language. Its a common greeting of "hello" but the literal translation is "are you well or content?"


Although the food was very good, the portions was very small compared the previous meals we got on the food stalls for a fraction of the price. For 2 large beers, an appetizer, a salad and a fried noodle dish, we spent about $ 13.00.

Our night ended by walking the streets some more and picking up a few souvenirs that we knew we would only be able to get on Khao San Road.