From Hostel to a 5-star hotel: Savoy Resort & Spa

The ride to Abu Dhabi airport was cheaper than what we paid the previous night. It only set us back 75 AED instead of the 100 AED.  Since we had some time, we did some duty free shopping and the Mo bought a bottle of Johnny Walker Platinum 18 Years and I scored a free carry on luggage.

Our flight was delayed by an hour and we finally herded onto the plane via a shuttle.  The 5 hour ride seemed like it took forever but I had some company sitting near me. I met a British girl that does vocals for Calvin Harris. She had some very interesting celebrity stories to share. 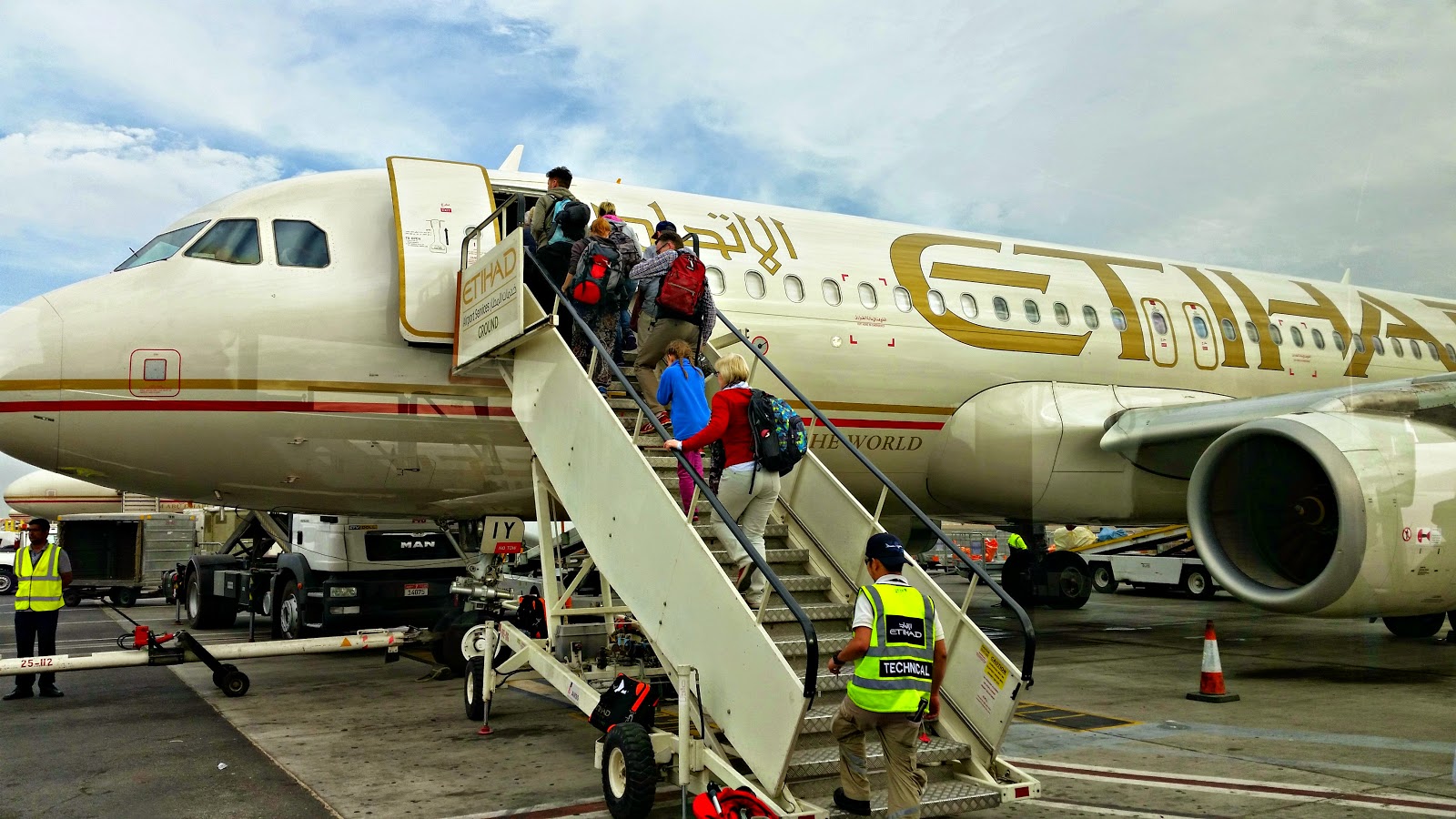 Customs/Immigration at Mahe Island was a bitch! Since we were already delayed an hour, we arrived at the very same time another flight landed.  They got priority to the lines and it took us over an HOUR to get through the process.  Not to mention, the airport was hot and stuffy! 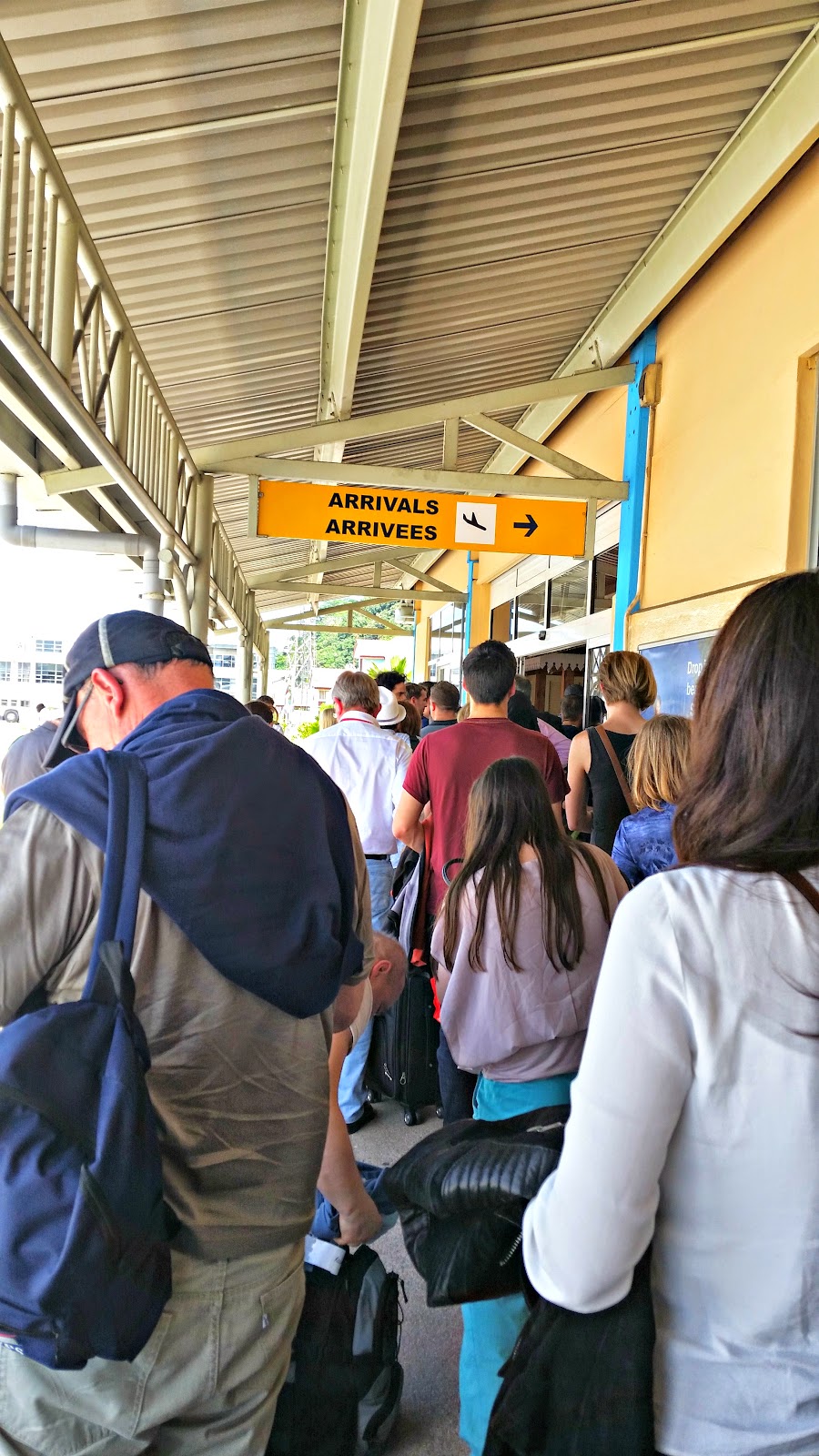 After we got our luggage, I was all sorts of disheveled and annoyed.  We waked over to the taxi queue to find out that our hotel transfer would be $50.00 USD.  I'm already annoyed but I try to haggle anyway.  The driver wasn't having it so I reluctantly gave in.  45 minutes though traffic and mountainous curvy roads and we arrive at Savoy Resort & Spa in Beau Vallon.  The resort has one of the largest pools on the island and boasts 6 dining venues to choose from.

The Mo has been super busy and stressed at work. He didn't want to spend our vacation with a busy itinerary that included moving around and essentially "backpacking." He just wanted to spend the week relaxed and doing completely nothing.  He found a good deal on Agoda and booked it for a few nights.

I felt like we were VIP or something, the workers came rushing to our cab to greet us.  We had 2 porters and a receptionist attendant.  We were brought over to a sitting area near the lobby.  My initial reaction was, "Great, now we have to wait to check in!"

I was completely wrong, a staff member brought us over some herbal iced tea along with refreshing ice cold face cloths.  I was already at ease.  Isabelle, the check-in attendant took our passports and checked us into the system as we enjoyed the refreshments. 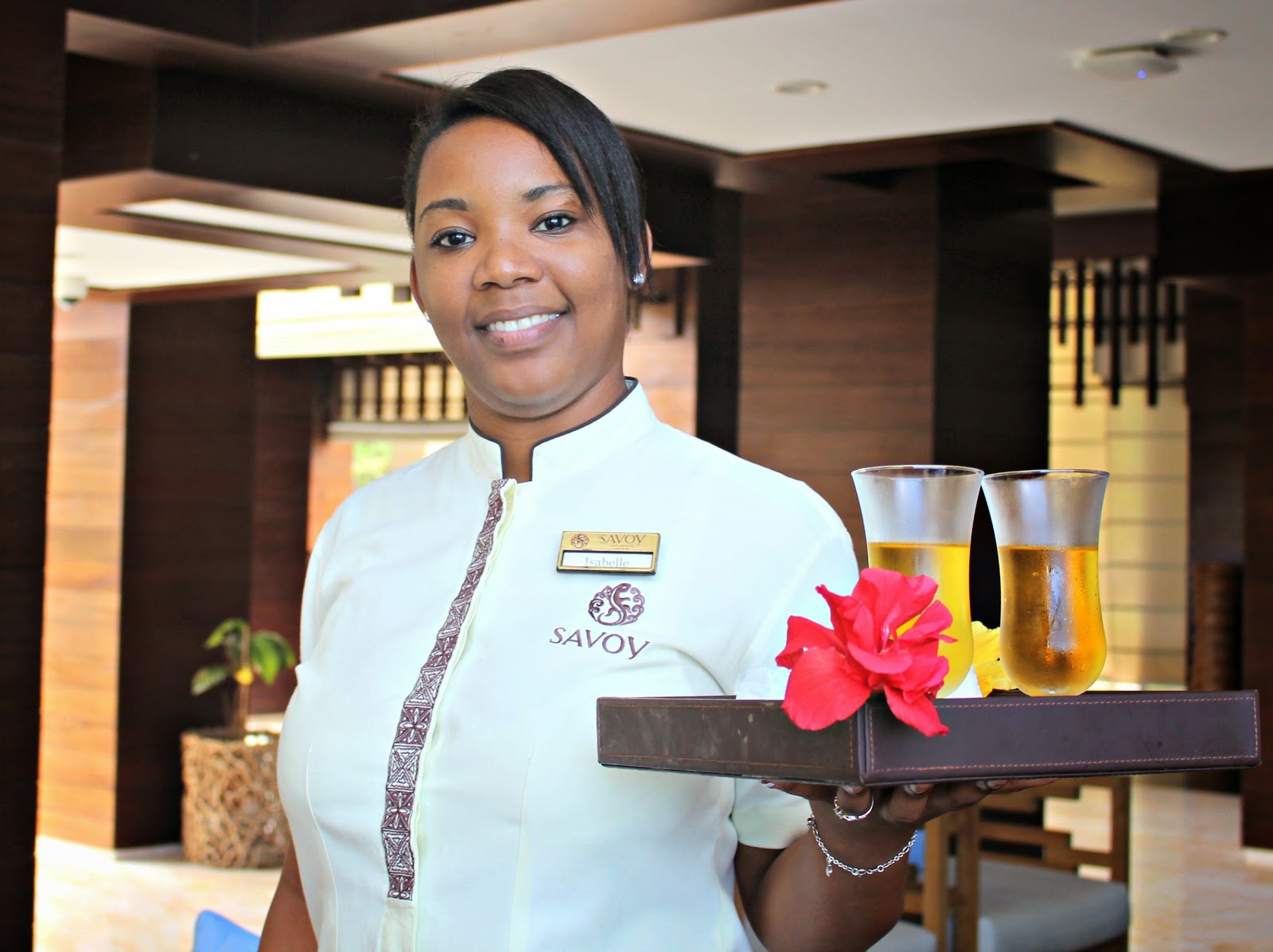 Isabelle escorted us into our spacious junior suite room on the 2nd floor of the main building.  The room had a great pool and ocean view.  It had a separate bedroom area along with a separate living area and a walk in closet.  I was in heaven!  Isabelle was great about explaining everything to us so we knew how everything worked. 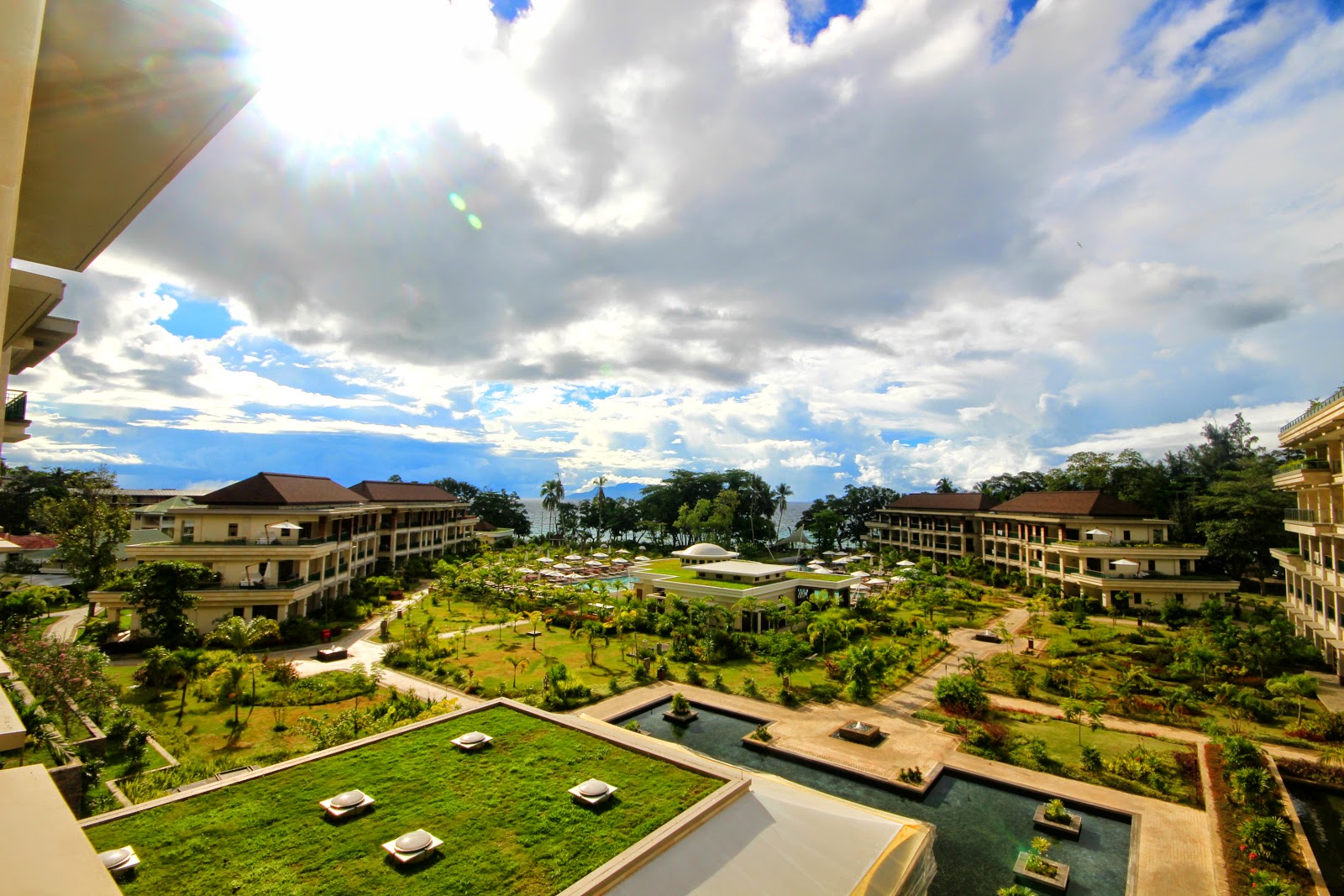 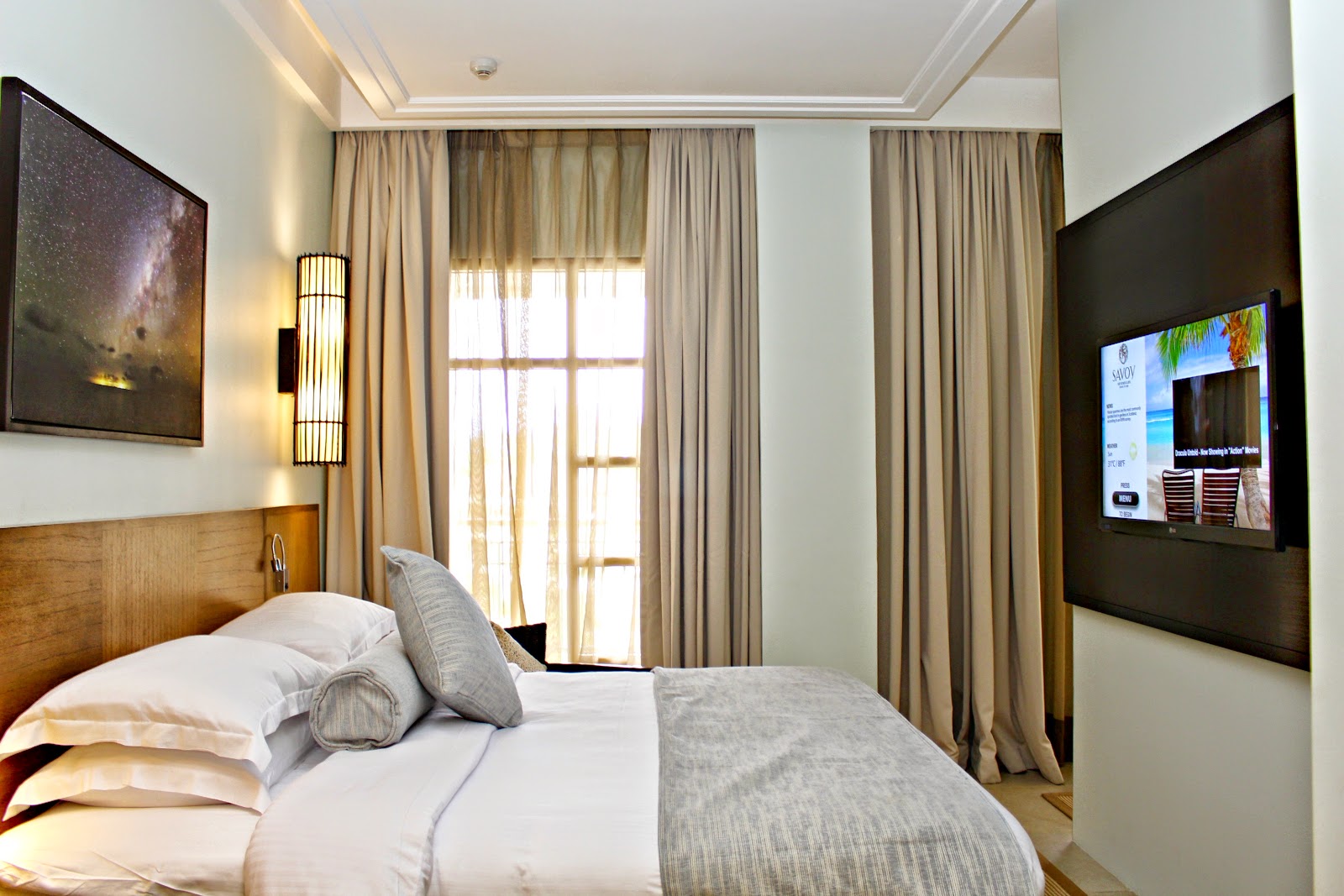 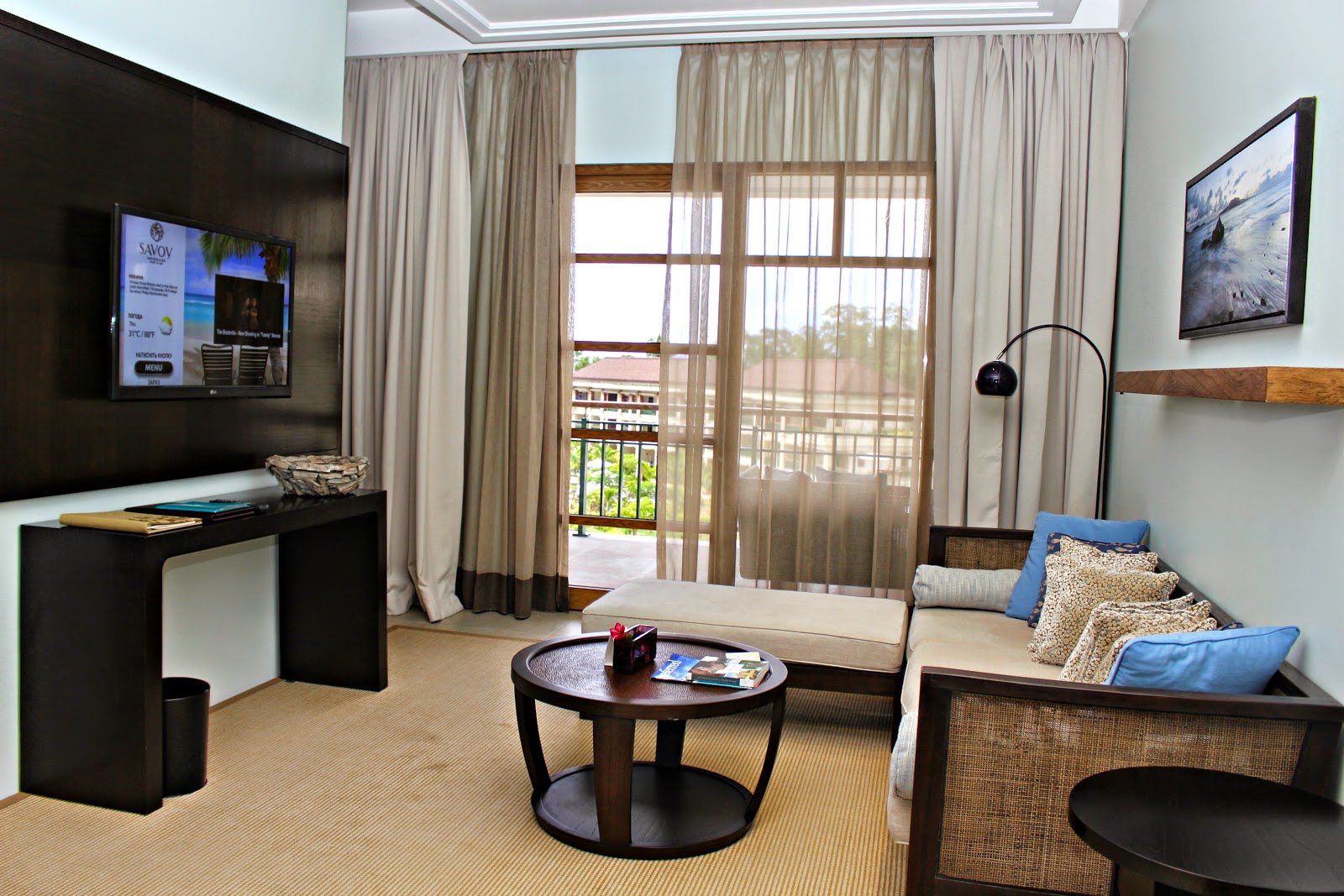 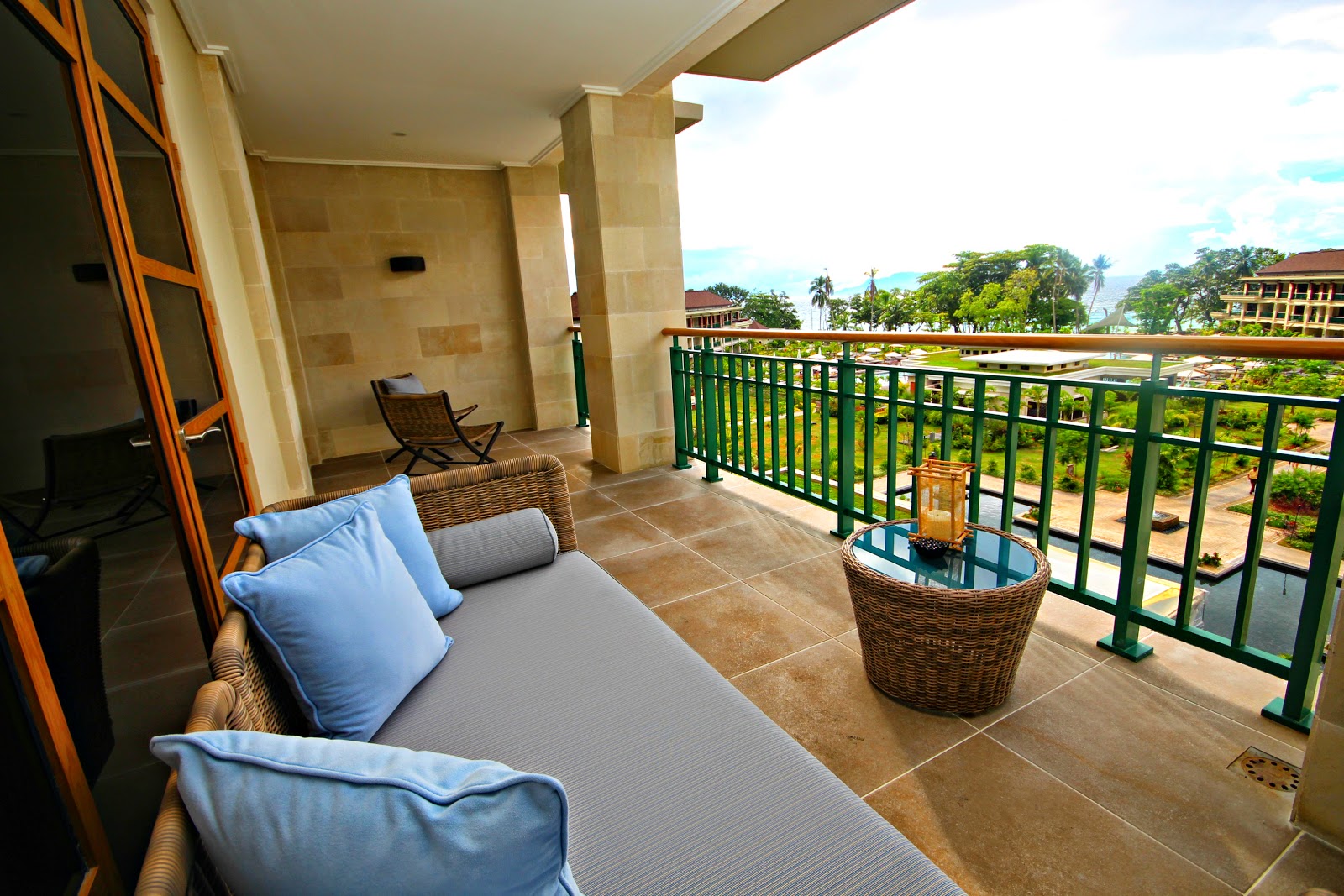 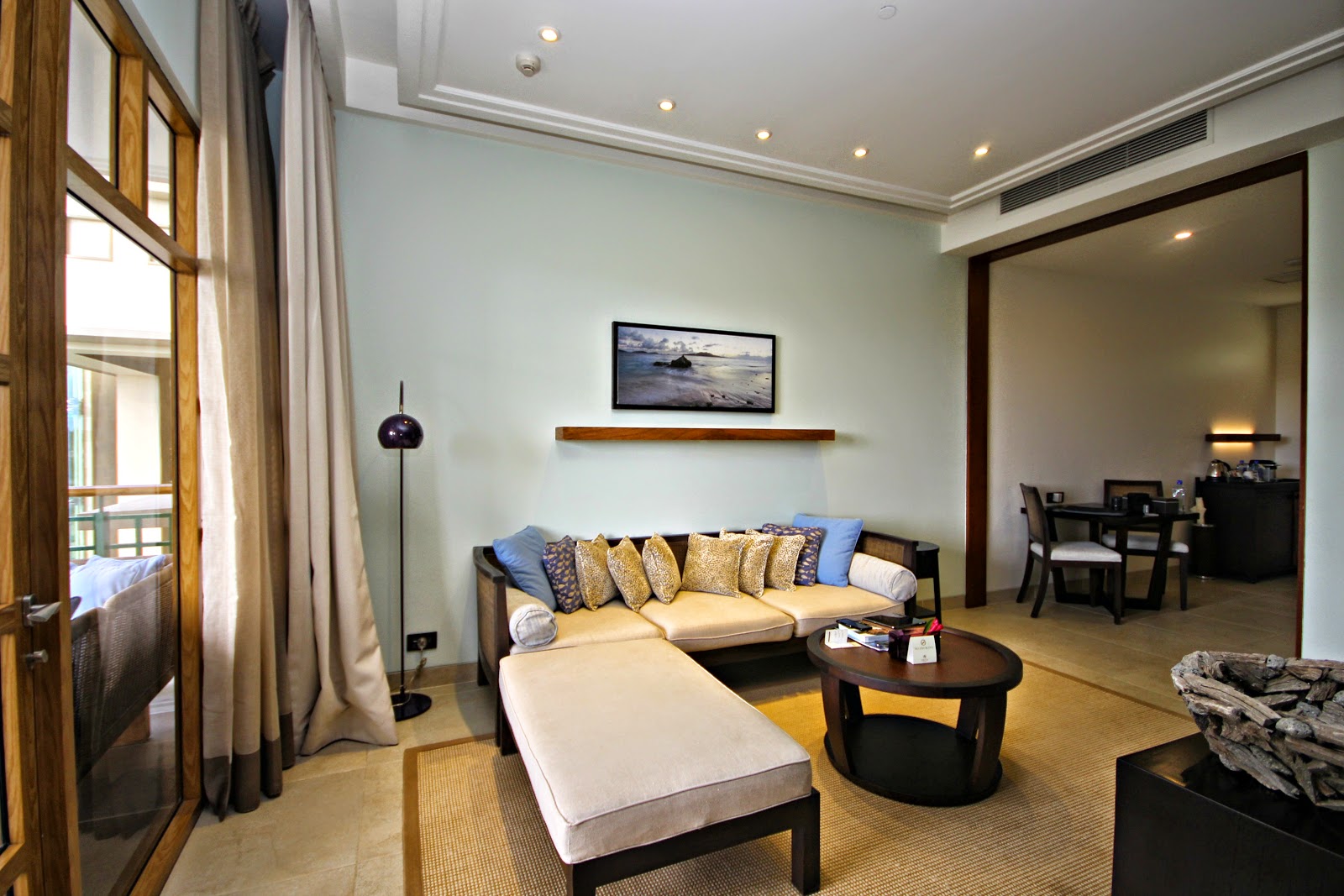 The suite even had its own Nepresso maker! 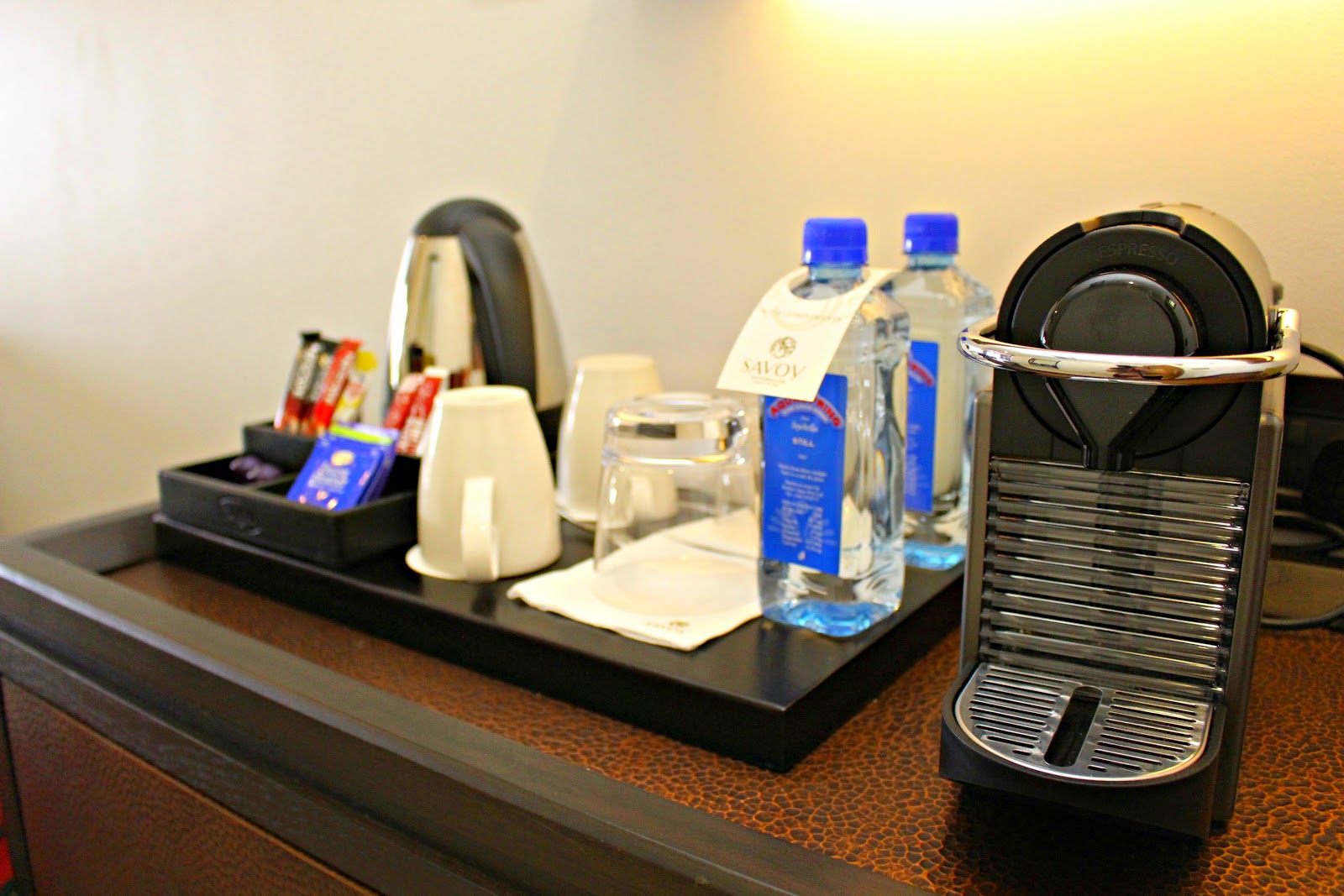 I loved the large bathtub! I never take baths at home so it was really nice to have one. 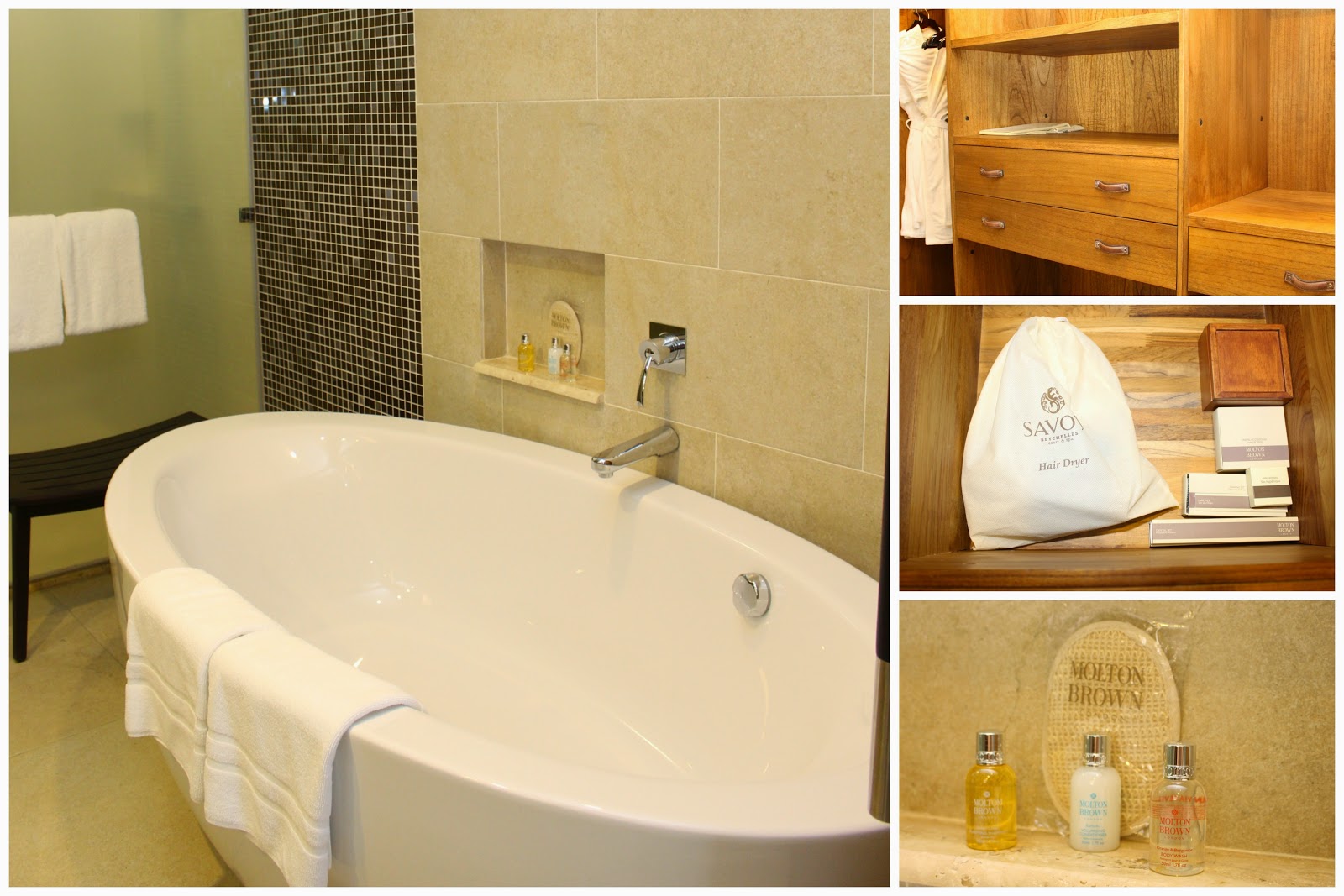 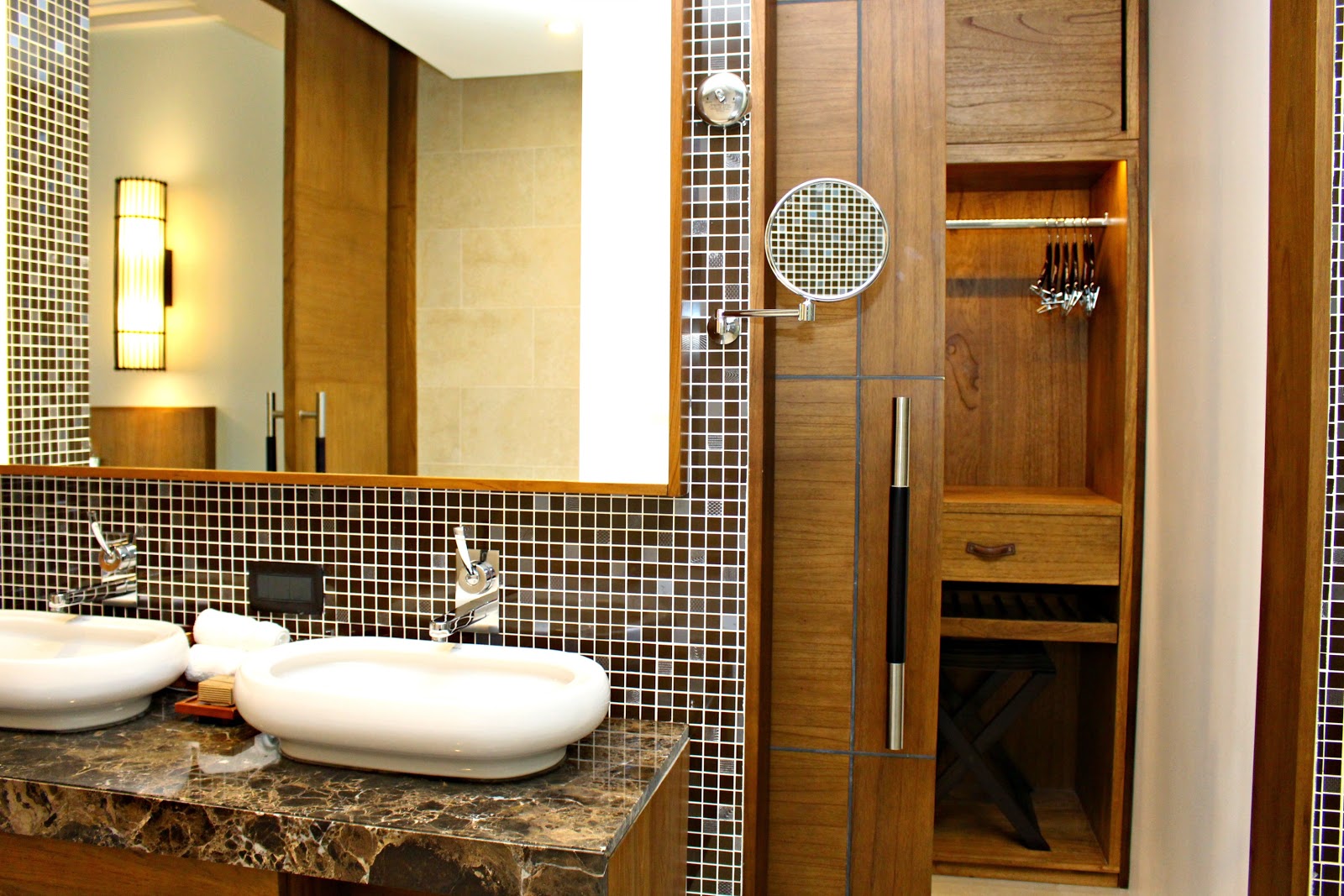 We were too exhausted to explore the area so we hung out by the pool for the afternoon. 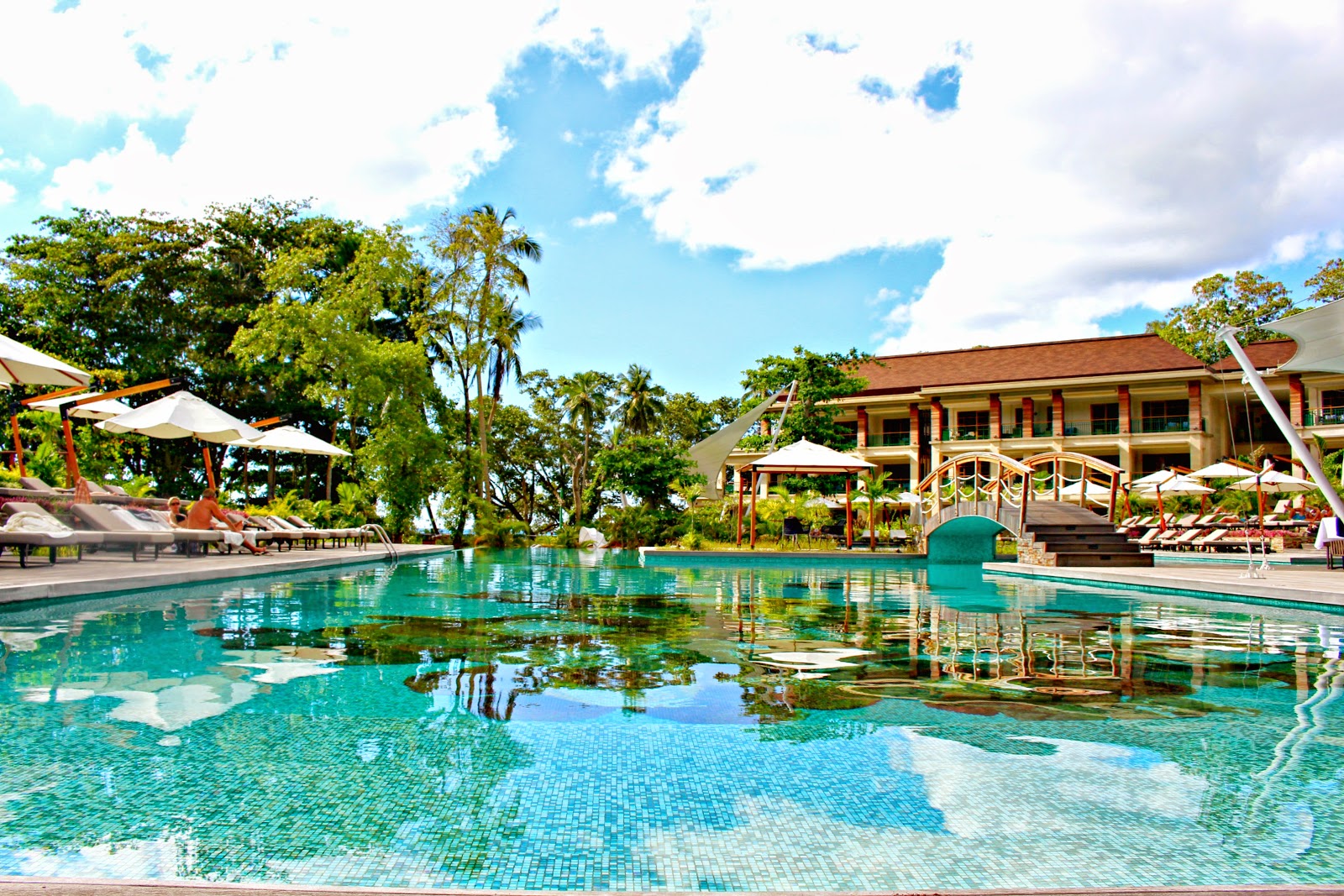 I didn't know much about the area but I did learn at check in that there was a Happy Hour special between 5-7 at the resort's Gecko Beach Bar.  It started to drizzle a bit so everyone hung out under the covered area. 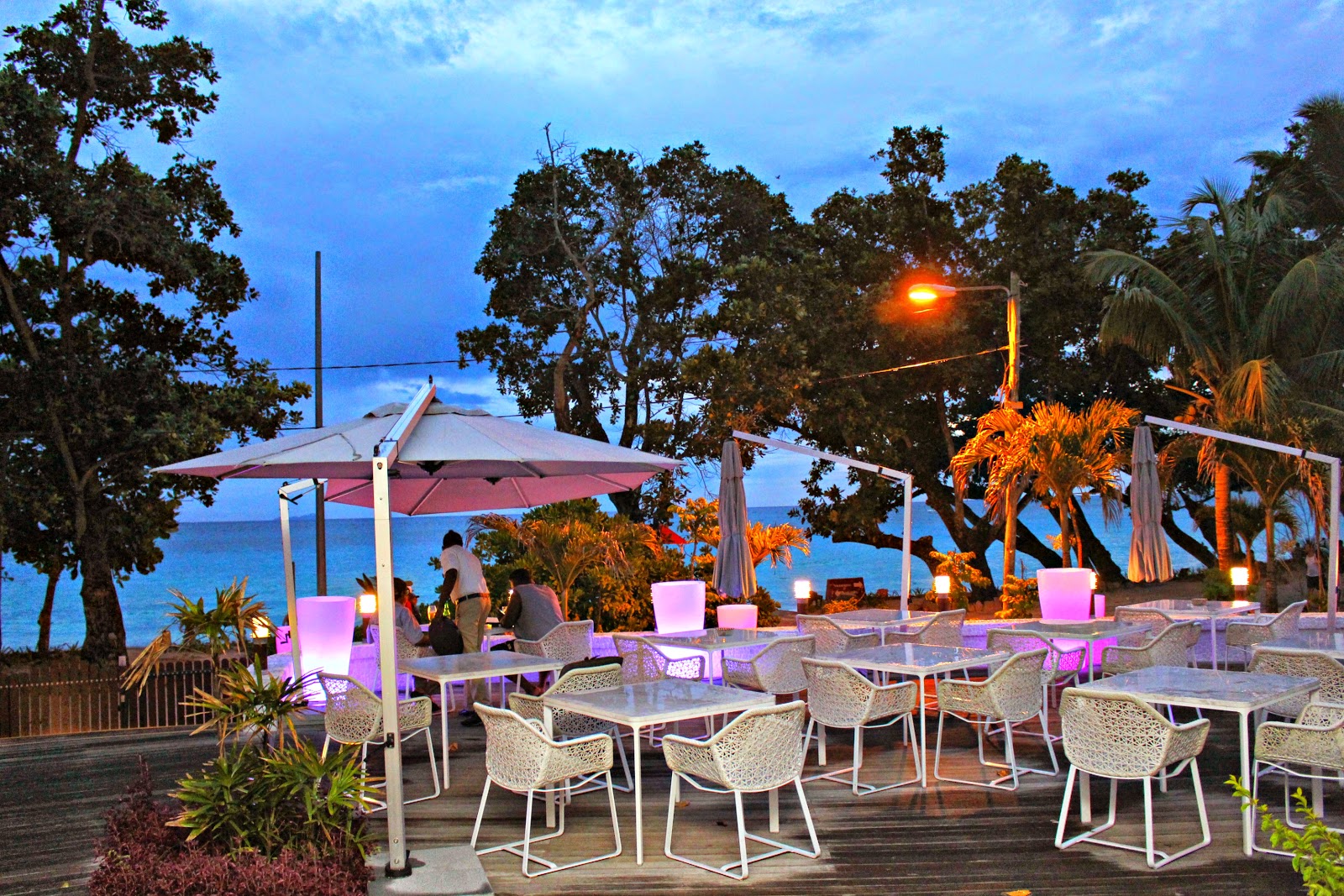 The Mo took it easy and stuck with beers and I did my usual red wine. 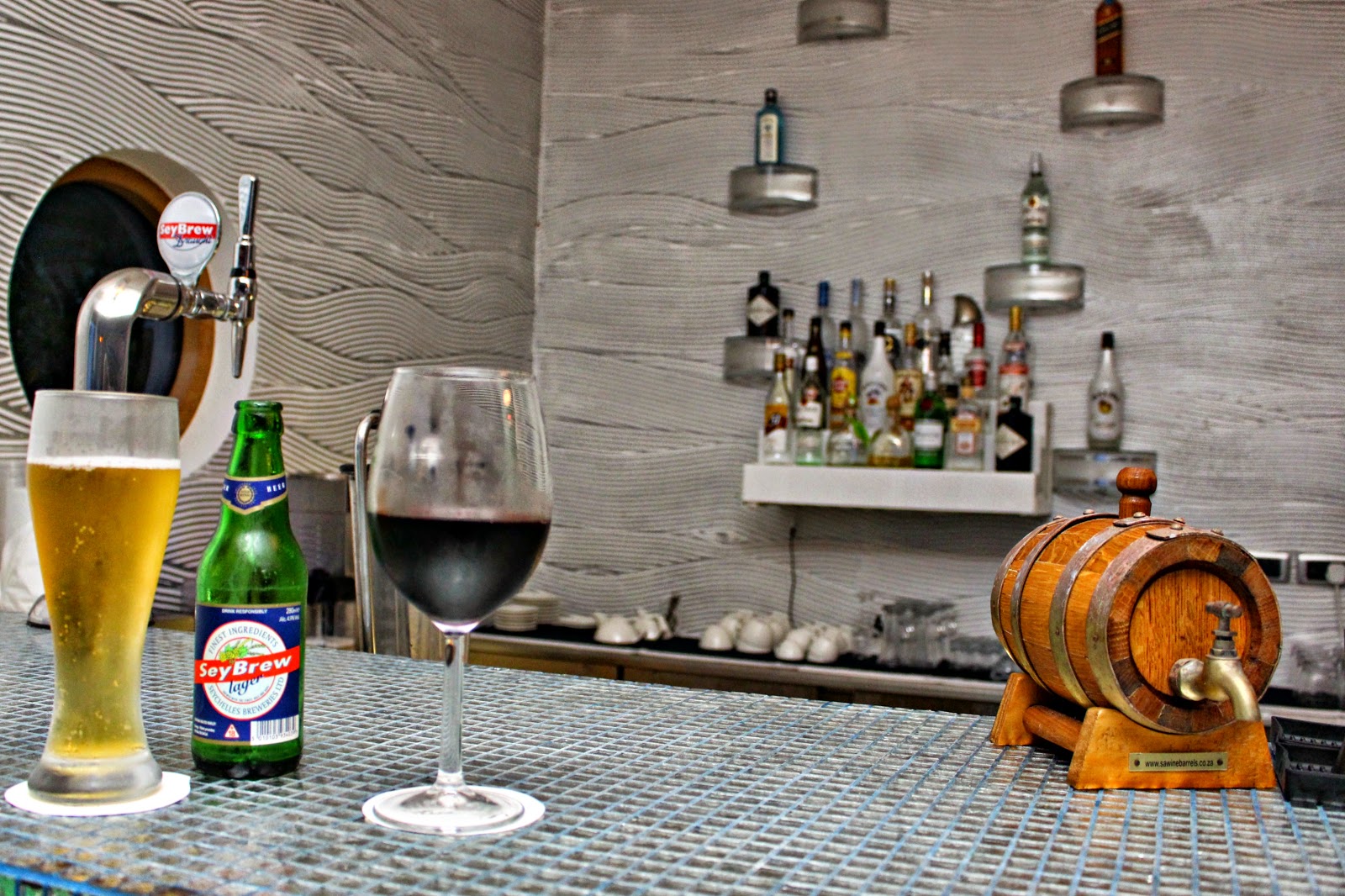 For the 2nd round, the young waitress convinced me to try their house sangria and I obliged. It was pretty good! 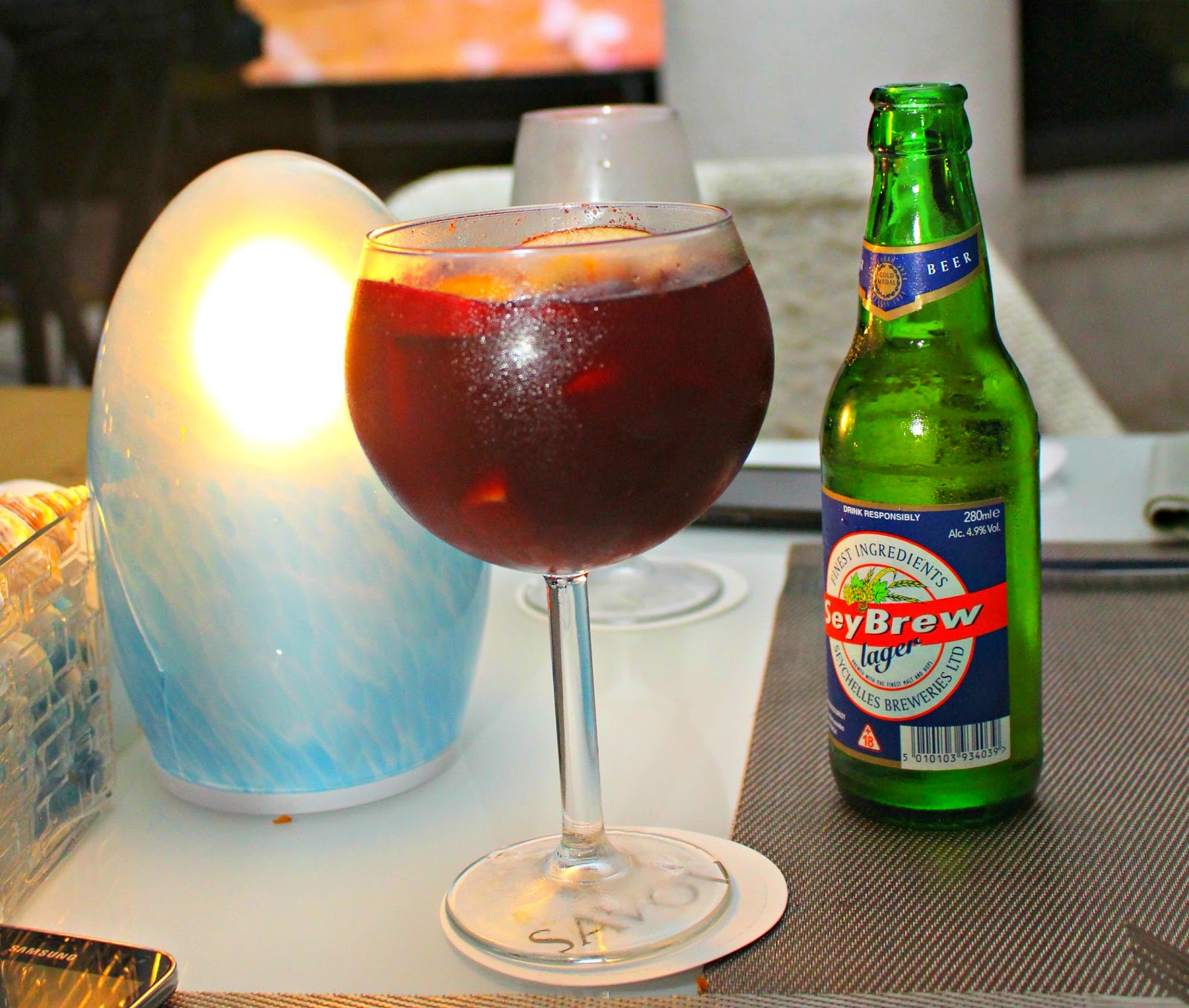 We didn't know what to do for dinner so we decided to take advantage of the "Happy Hour" Special at the beach bar.  There was an "Ocean Waves Platter for Two" with mixed seafood so we went for that.  The price was 1100 SCR which is equivalent to $81.00 USD.  EEEKKK! The food was good but NOT worth $81.00! I guess everything is EXPENSIVE in Seychelles! 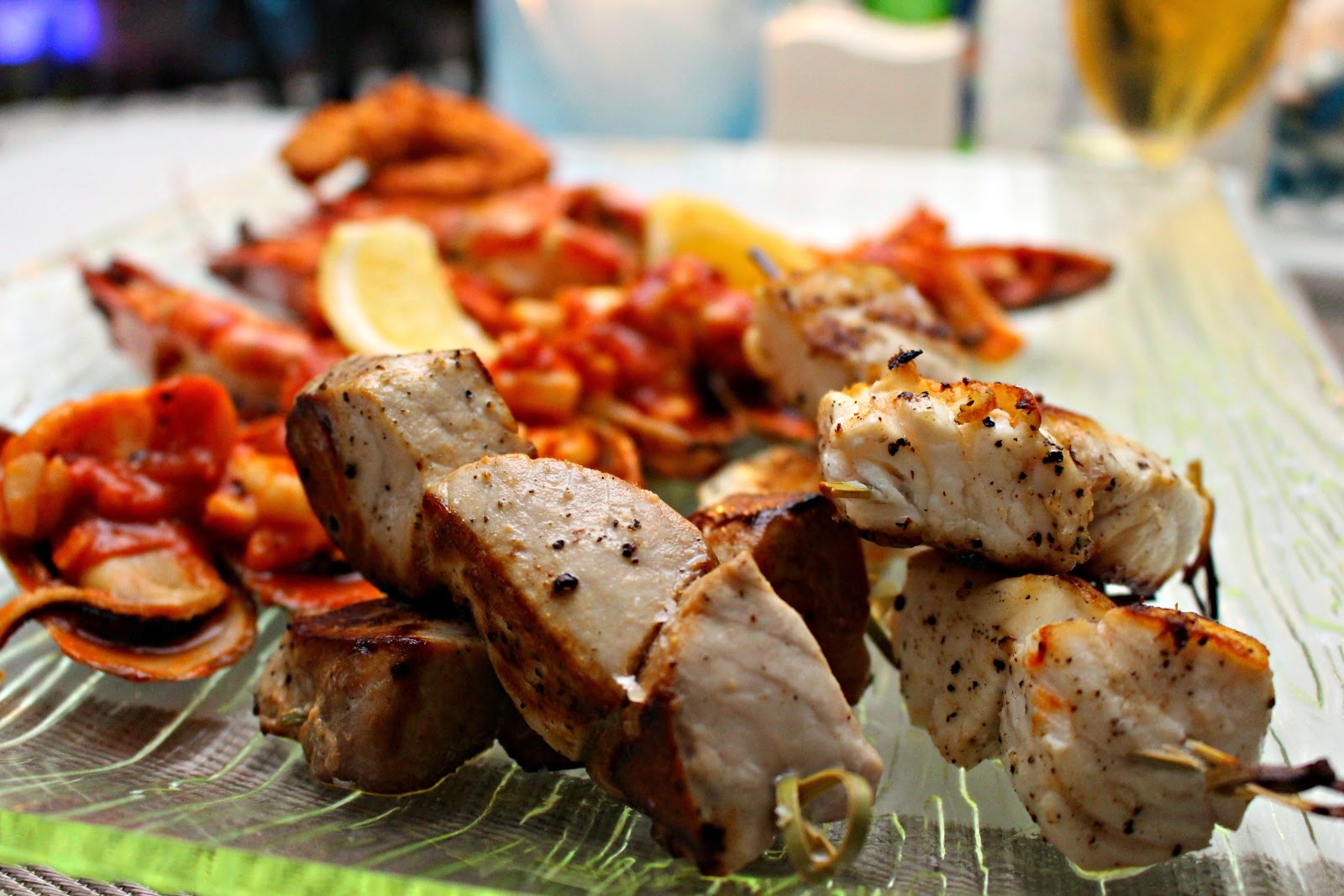 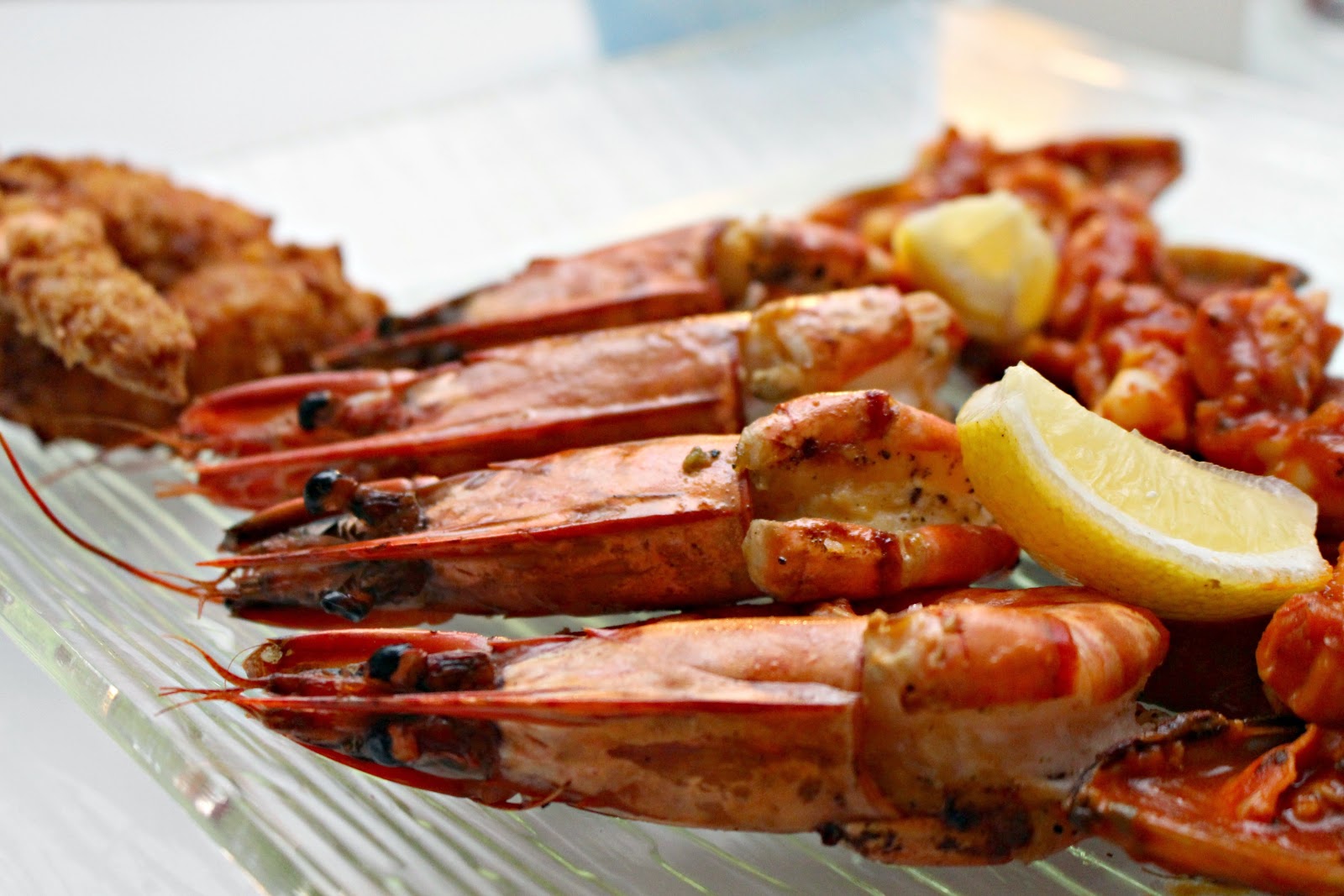 There was commotion along the beach path by our resort.  We followed the crowds to what was the weekly Wednesday night Bazzar in Beau Vallon.  There were vendors selling goods and food stalls everywhere! I wished we learned about this earlier! Our dinner would have been less than $20 bucks not the $100 bucks that we spent on food and drinks at "Happy Hour!" 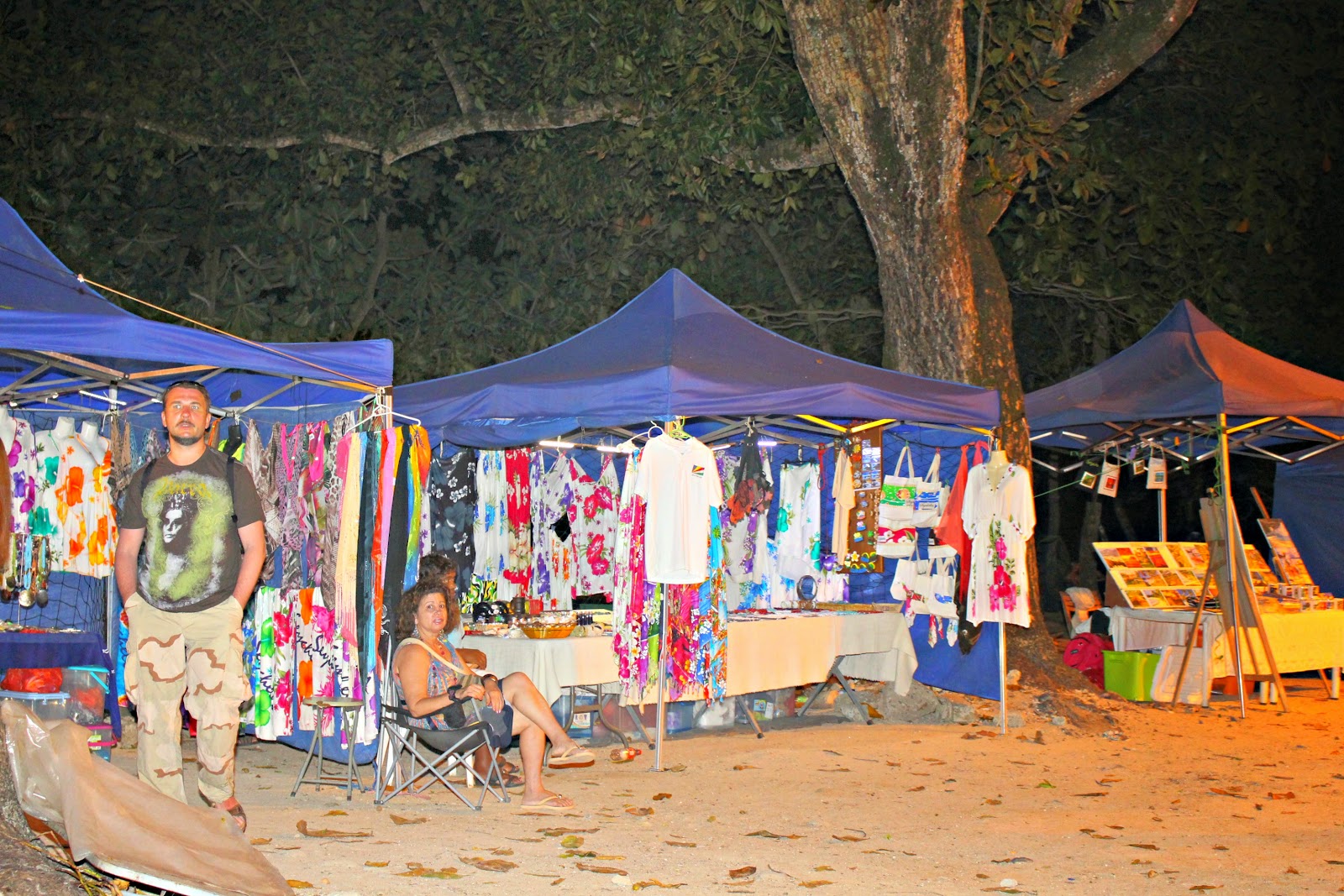 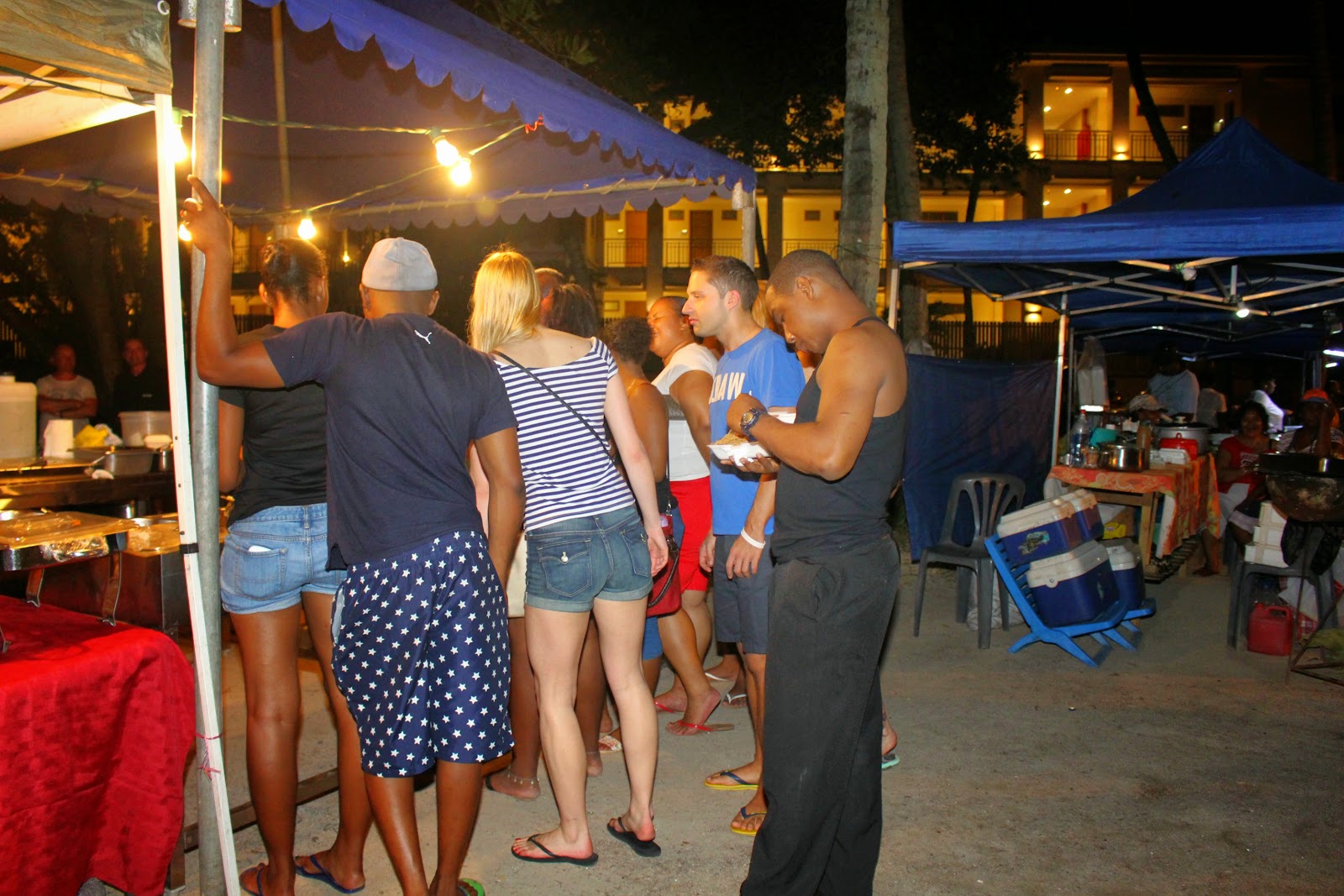 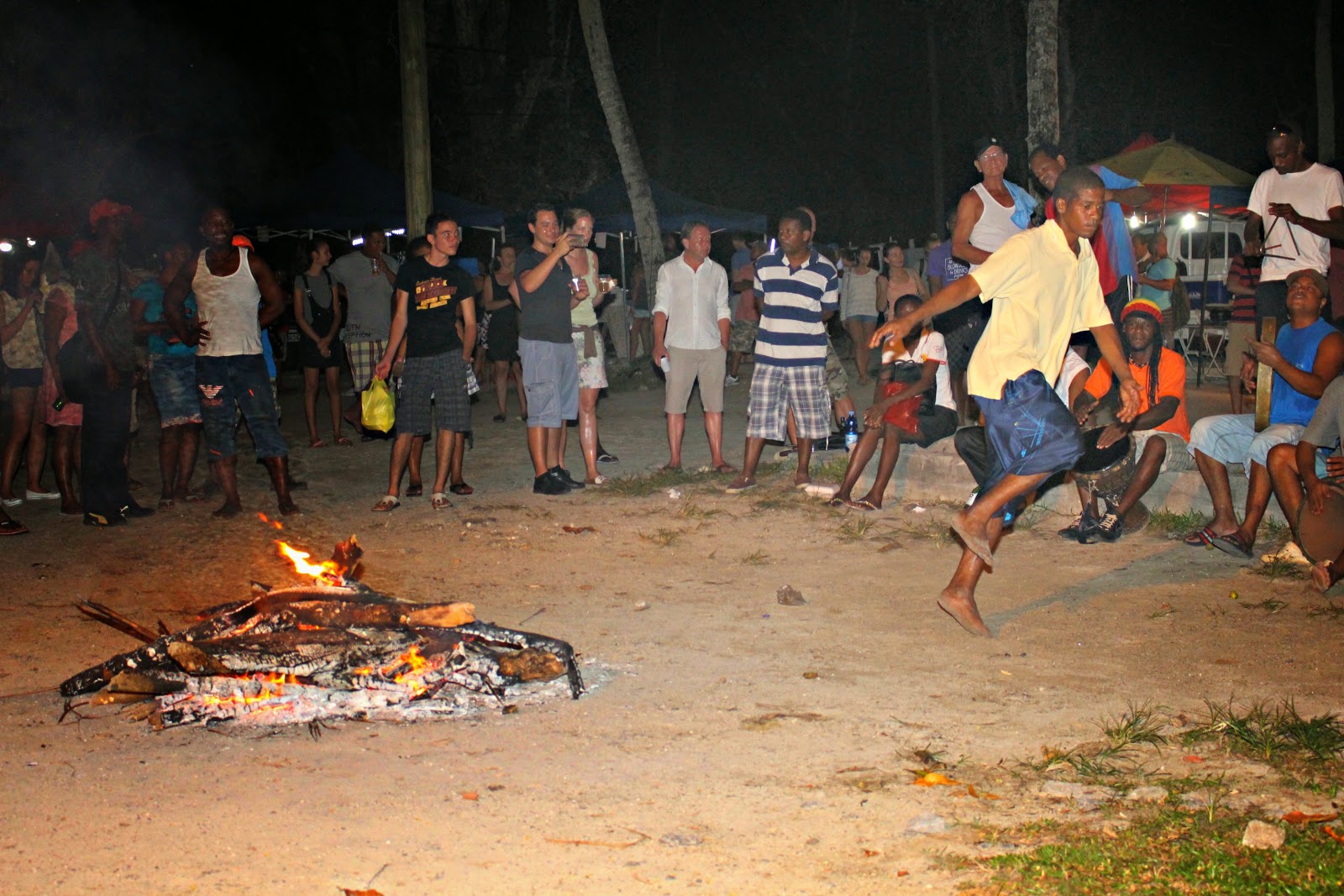 Everything smelled delicious, both locals and tourists were feasting on the different variety of foods. 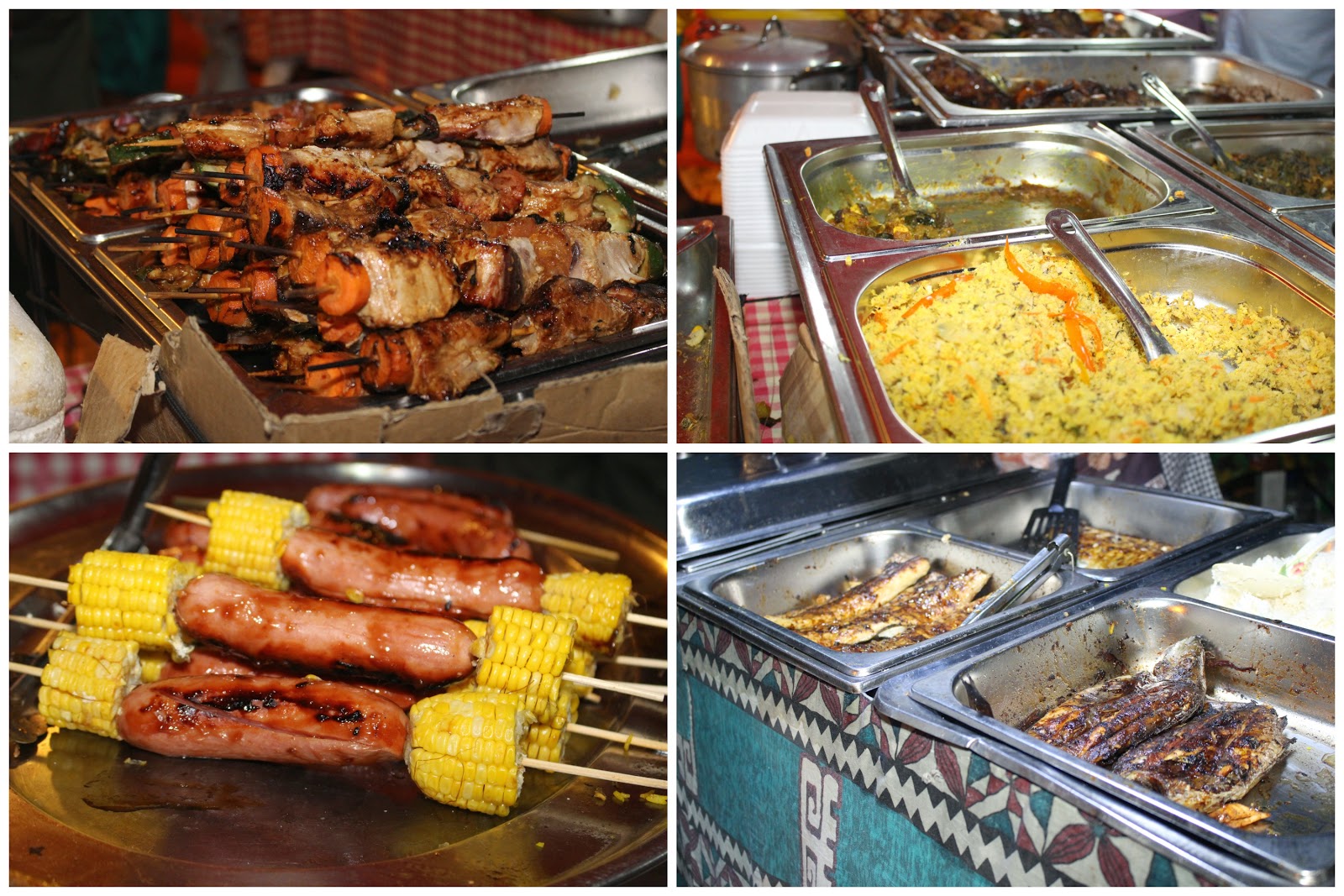 It was a tiresome first day and we were in bed by 9 PM.
Newer Post Older Post Home