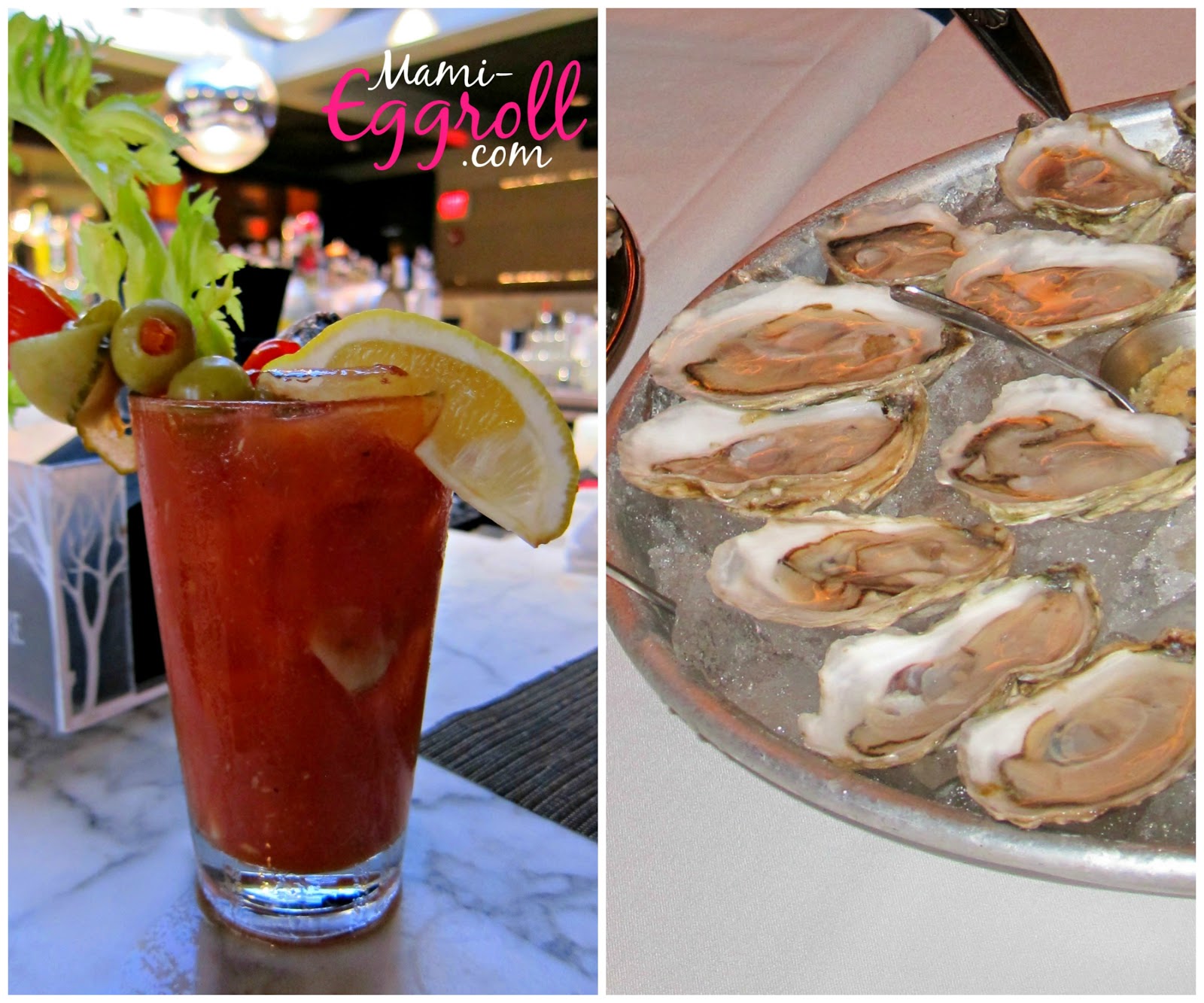 Most people kick off their New Year with a resolution to lose weight.  We, on the other hand, continued our booze- filled festivities that has become a tradition since Thanksgiving.  Since we had a long 4 day weekend, why not start the resolution on a fresh Monday and get in as many drinks in before then?

Moonstones sent out an email notification about their New Year's Eve and Day specials.  The Constant Contact blast featured a new Happy Hour Menu, bloody mary bar and dollar oysters.  I was sold at "Buck a Shuck."

We rounded a group together and made reservations early on and changed it around a few times.  Ultimately, there were 8 of us that showed up around 1:00 PM.  The restaurant was packed and I was afraid there would be no oysters left since the manager said the guys hands were starting to get sore from shucking hundreds of them in the past hour alone.

After our whole party arrived, we awkwardly sat around waiting for our server to come greet us and take our drink orders.

5 minutes goes by. No one.  10 Minutes go elapsed. No one.  After 15 minutes of sitting, I went to go find someone.  Looks like no one was assigned to our table.

The restaurant was serving its full menu as well as their new Happy Hour Menu where the small plates had smaller portions for a fraction of the price.

I inquired about the bloody mary bar set up at the main bar area and our server explained to us that we order specify the type of vodka we want and he puts the order in and prints us a ticket that we redeem at the bar.  We went with the basil infused vodka ($9.00 each) and the bartender poured the vodka into pint glasses with lots of ice and the Bloody Mary mix made in house.  The pour for the vodka was on the lighter side. 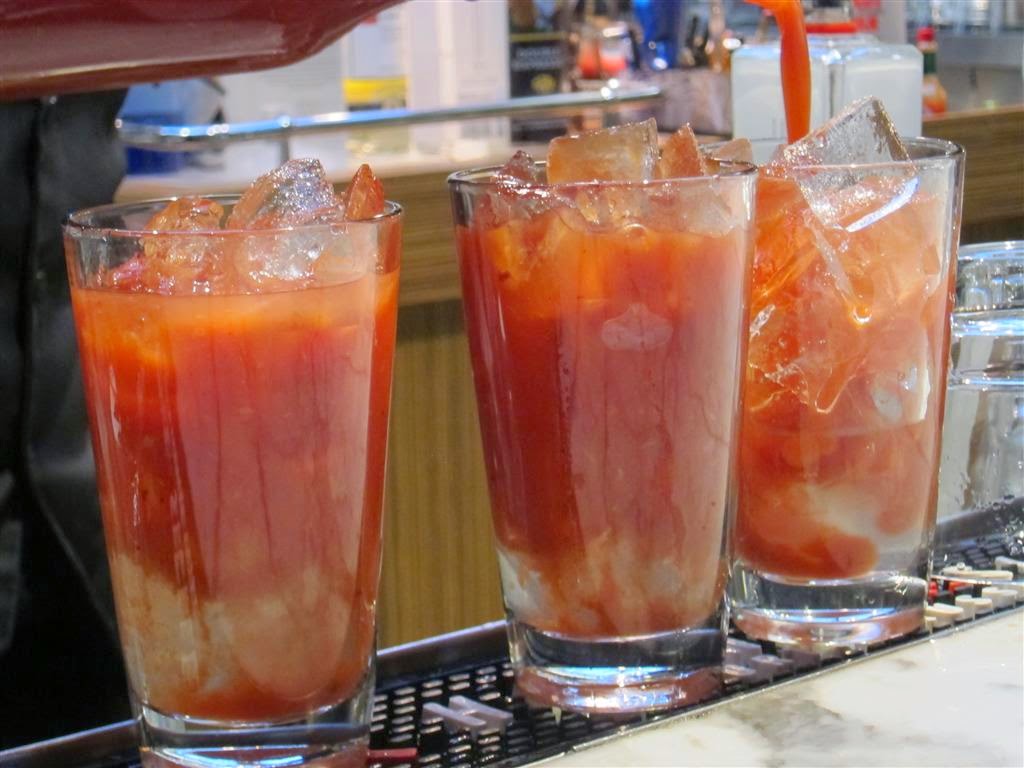 The first station had different seasonings that included old bay, celery salt, peppercorns, garlic powder, etc.  The pink Himalayan salt tiers were pretty cool. The 2nd station was all the different hot sauces. There were some that just sounded painful, "Pain is Good Jalapeno" and a Habanero hot sauce.

After you create your own concoction, the bartender shakes the drink for you.  There is also a garnish station where you can add peppers, lime, celery stalks, olives, peppadew peppers, onions, etc.  You could skew as many as you wanted.  Cocktail shrimp was an extra $2.95 ea and bacon was .50 cents extra, 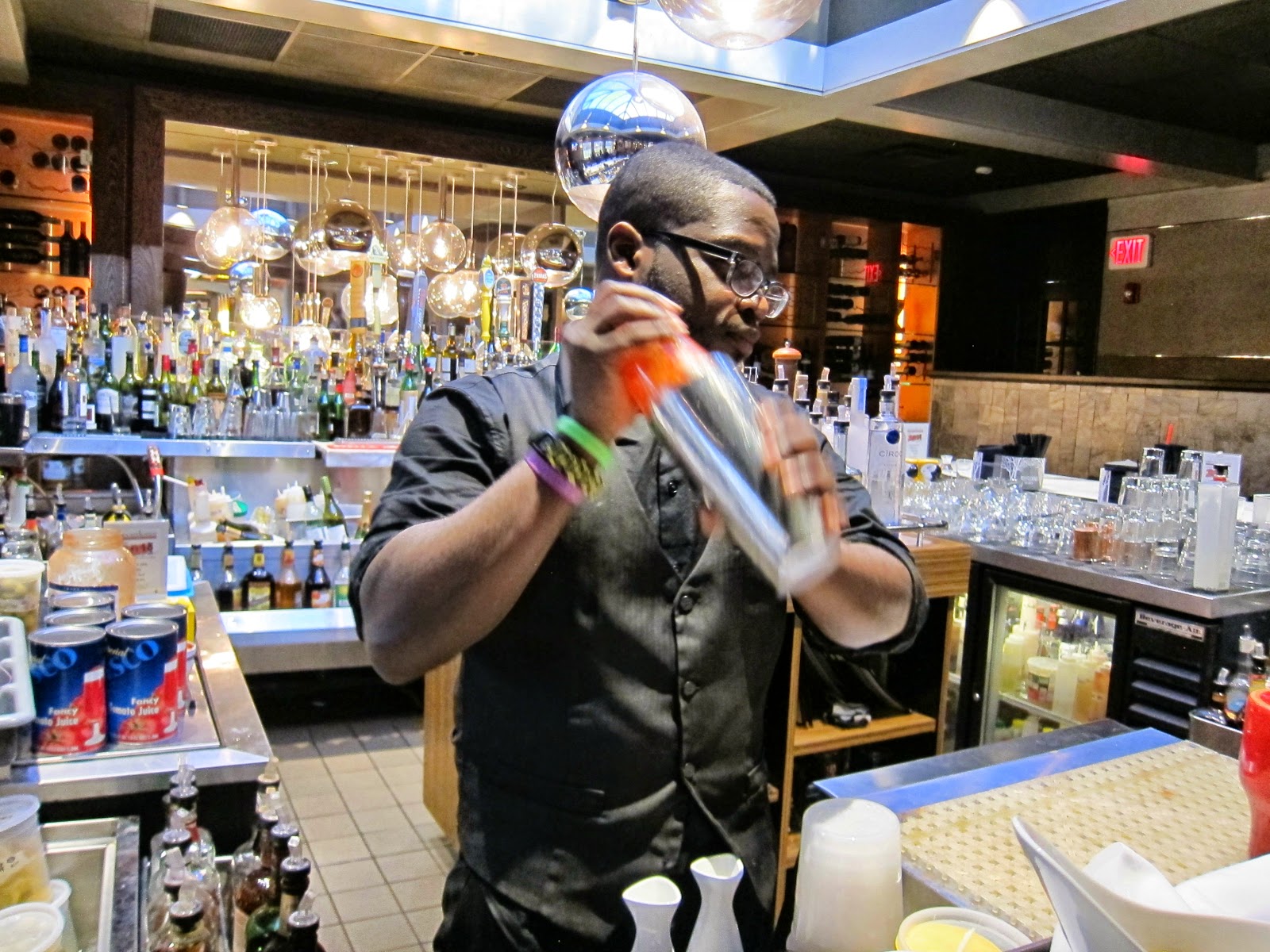 For those that didn't take part in the bloody mary's, they got a lime rickey or split a pitcher of sangria.

We were all happy after we got our drinks!

In an effort to beat the rush, we ordered 3 dozen oysters on the half shell at a buck a shuck!  The waiter warned us it would be a bit longer due to the large demand but we were fine as long as we got our order in.  The oysters came in 2 platters with horseradish, cocktail sauce, lemon and malt vinegar.

For our meal, we couldn't decide on what to get so we got a bunch of things to share. From the tapas/Happy Hour menu

The la quercia rosa prosciutto "made in america!" Iowa prosciutto was different.  I'm used to the thin cured meat in high end Italian restaurants that Moonstone's left me confused and regretting my order. The domestic version was a bit on the hard side and I though the pita chips were random.

There was potato pancake served with onion jam and sour cream from the global tapas'n such menu selection.

The kitchen or server made a mistake and gave us the Korean Pork Belly in lettuce wraps with cilantro lime sauce.  We got to keep it and it was really flavorful and succulent. There was a slight guilty pleasure consuming all that swine fat.

What we was supposed to get was this: Pork Belly steamed bun.  The bun was soft and warm. It was VERY good.  I would have thrown on some scallions for garnish.

There were others that got the Mexican version or the Vietnamese Banh mi version.  All were $3.00 each.  Someone at the table said the banh mi version was not good.

To stick with the Asian theme, we also got the fiery-sweet Korean spicy wings.  It was rated "HOTTEST" on the menu but it had the perfect kick to my liking.  The 4 piece Happy Hour version was a great price at $5.00.

The Mo LOVES their home made BBQ potato chips.  We got 2 large orders to share for the table. They were addictive.  I could feel the course seasoning and sugar linger in my mouth.  BG said the chips reminded him of the old school Homeboys & HomeGirls Potato Chips from when he was younger.  That conversation led to a GOOGLE SEARCH of the chips because only a handful of us knew what that was.  I knew 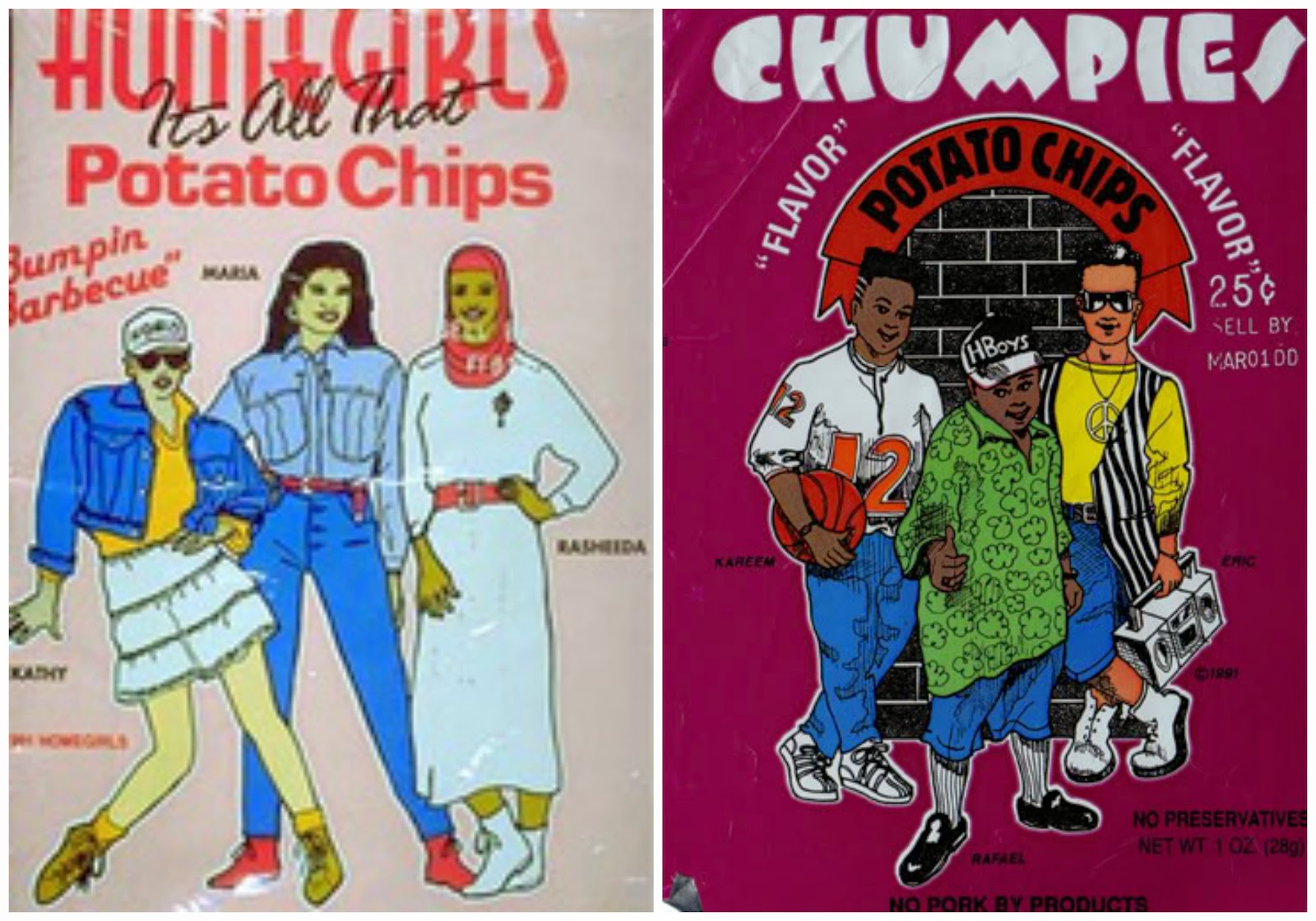 We got two orders of fries. I can't remember if they were the rosemary sea salt or the truffle ones but they were good skinny sticks of lightly fried potatoes. You would we would be stuffed by now and we were getting there.  Too bad we had already ordered entrees in addition to everything above.  Some of us split the Churrasco platter for two that had braised short rib, more pork belly, grilled lamb with Greek salad, chourico, spiced wings, patatas bravas and Brussels sprouts.  The spiced wings were reminiscent of the BBQ chips, I think they share the same seasoning.  The potato with cream sauce was good but I wished the left out the sofrito.

There were other entrees that ended up in take out boxes because we were all so full.


Most of the food was great with a few of the exceptions mentioned above.  The service was really friendly and wonderful once we were able to determine who our server was.

The total came to around $336.41, not including gratuity.


Check out my other posts for Moonstones.

We've actually had the oysters, chips and Korean Wings on our first Visit.