enjoy life.
one bite at a time
That's their motto and I love it!

For our anniversary, we wanted to do something special and made plans to have dinner in Boston.  After Google Nav informed us that it would take us about 90 minutes from my office in Burlington to Brighton with the rush hour traffic, we opted to head back home to Lowell and find something nearby.

We finally opened up our new bottle of Balvenie Portwood 21 Year Old and had a few drinks before we decided on where to go for dinner.  The first option was our usual favorite, Fortunato's in Downtown Lowell, but since it is under new management, we were a bit reluctant since their website lacked information.  We also considered Ricardo's Cafe Trattoria but then chose Moonstones on a whim.

I've always received email specials from Scott Platt who owns both Cobblestones in Lowell and Moonstones in Chelsmford but never had a chance to make it over to Moonstones.

Upon arrival, we were greeted by a friendly hostess who advised us that there was one single table left in the dining area.  We opted to sit at the bar and wait for a table in the lounge where the scene was livelier.  The restaurant decor was very chic and modern. It's hard to believe that the place once used to be the Ground Round.
At the bar, I ordered the House white wine and the Mo ordered a scotch.  I checked out what the other patron's were eating and everything looked amazing.  Even something as simple as a burger looked delicious.  After a short 15 minutes, two tables opened up in the lounge and we chose the option of sitting in a cozy table in the lounge.  We ordered a few more drinks at our table and looked over the global menu.  There were dishes inspired from Korea, Brazil, Turkey, Thailand, just to name a few countries.

We started off with 2 pairs of raw oysters and home made chips.  The oysters were lacked the "plump" that I was accustomed to but they were still sweet and delicious. 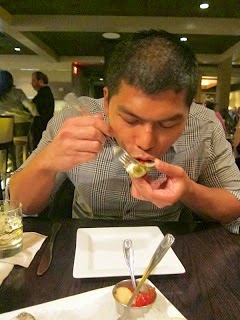 I was under the impression that the homemade seasoned chips would be hot or at least warm, but they were served at room temperature as if they were already premade. 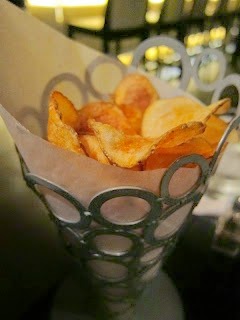 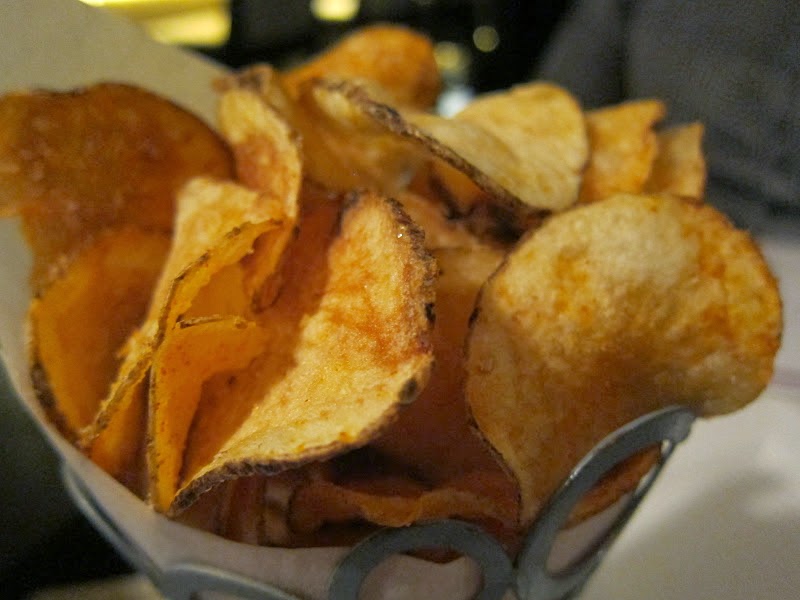 Instead of ordering entrees, we decided to share a variety of Global Small Plates and a side of Phad Thai Noodles.  The noodles were just OK and the flavor was not up to par with the traditional noodle dish served at authentic Thai restaurants.
The Korean Spicy Wings were reminiscent of Korean Bonchon wings.  Although the flavor was similiar, it lacked the extra crispiness of the double fried staple wings that Bonchon offers.
The Turkish spiced chicken skewers and hummus was exquisiteness.  It had the perfect amount of seasoning that balanced well with the hummus.
The Mo and I both enjoyed the savory Mango Lemongrass BBQ Beef Skewers.  The beef sticks were tender and had a nice sweet taste to it.


The Asian BBQ 5 spice short rib reminded me of a dish my mom makes called, "Kaw Kow", Cambodian beef stew which uses the same ingredients in the 5 spice blend.  The 5 spice is common among Asian dishes varying from Chinese Duck to Vietnamese Bon Bo Hue and Cambodian Beef Stew.  The 5 spice powder consists of star anise, cloves, cinnamon, pepper and fennel seeds.  The short ribs was very tender and succulent.  I am accustomed to being served short ribs on the bone but I was surprised that the dish was served boneless.

We are usually too stuffed for dessert, but we found some room for a Maple Cheesecake finale.  I'm glad we ordered it, it was scrumptious. It had a hint of maple and the perfect amount of chocolate and caramel swirls for dipping.

Overall, we would definitely recommend this restaurant to our friends and would be back.  We had a great time and would like to try the other global tapas on the menu.  Our final bill (less the original bar total) was just shy of $100.00 including a few drinks we ordered at the table. 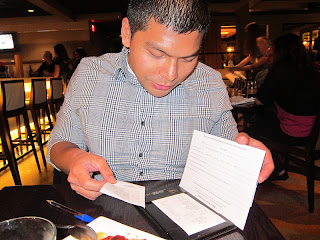 Time to pay up the Mo!