Almost every weekend, the Mo and I drool over the dishes we see featured on the Phantom Gourmet TV show.  As many times as they hosted the event, I've never had the opportunity to attend.  This year, I tried to get a group together for a discounted rate of $30.00 versus paying $40.00.  I was unsuccessful and threw in the towel.

I received a text from my brother the night before the event asking if I wanted to go to the Phantom Gourmet Food Festival, VIP status.  How could I say "No" to that? The comp tickets were provided by one of the even't sponsors, Dadgar Insurance.

We arrived at Fenway close to 11:00 AM and there was already a line across the bridge.  I forgot to dress the part and wear purple.


The VIP ticket holders were able to jump the line and go through the gates as soon as it turned 11:00 AM. They have a strict bag rule that couldn't exceed a certain size, I barely made the cut. 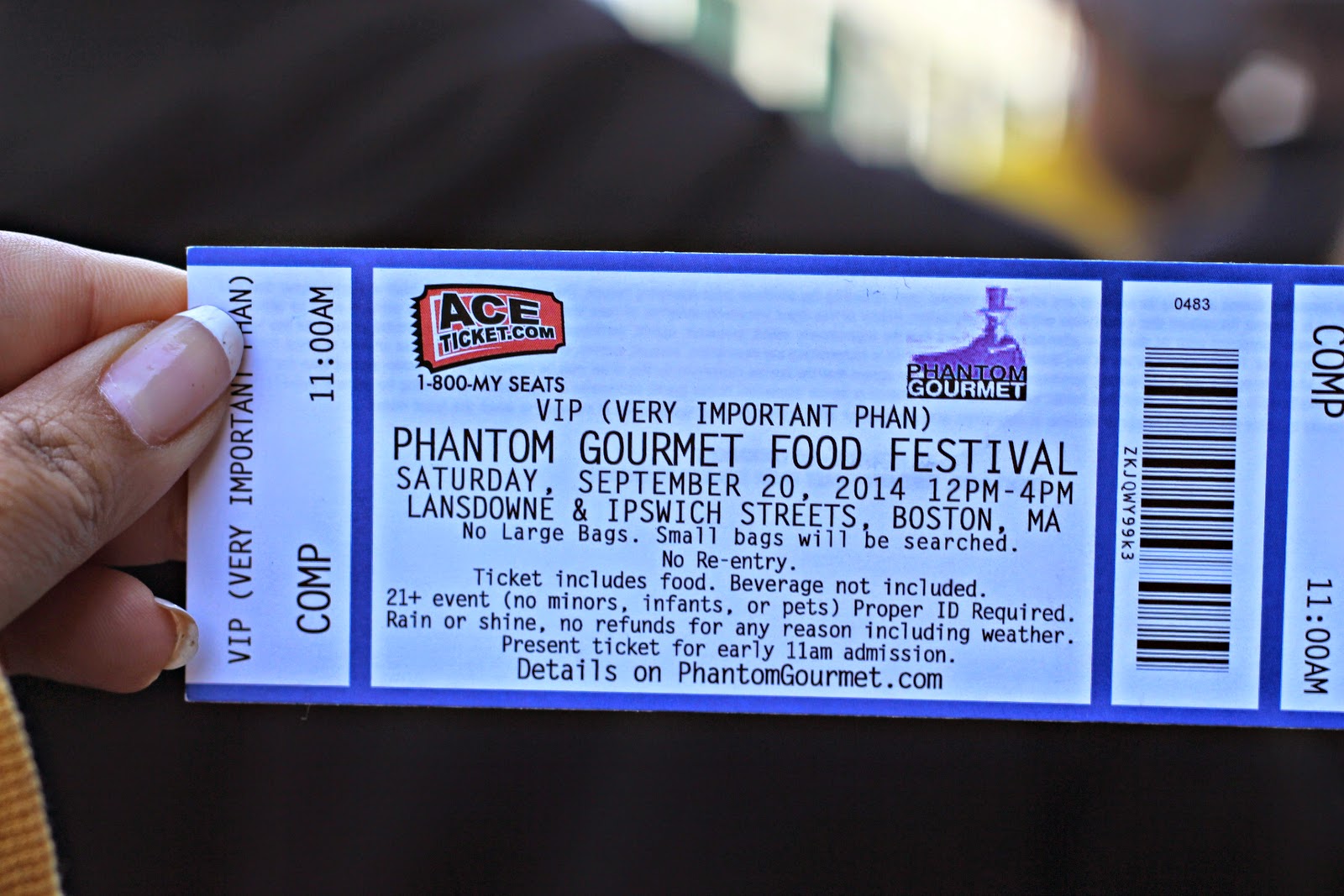 Once we got through, I could see why there were bag restrictions.  The first set of vendors were giving out chips, pretzels and pies for free! I was so excited but I had no where to put the stuff so I kept my freeloading to a minimum.  We made our way by a few other vendors offering pickles, popcorn and giveaways. 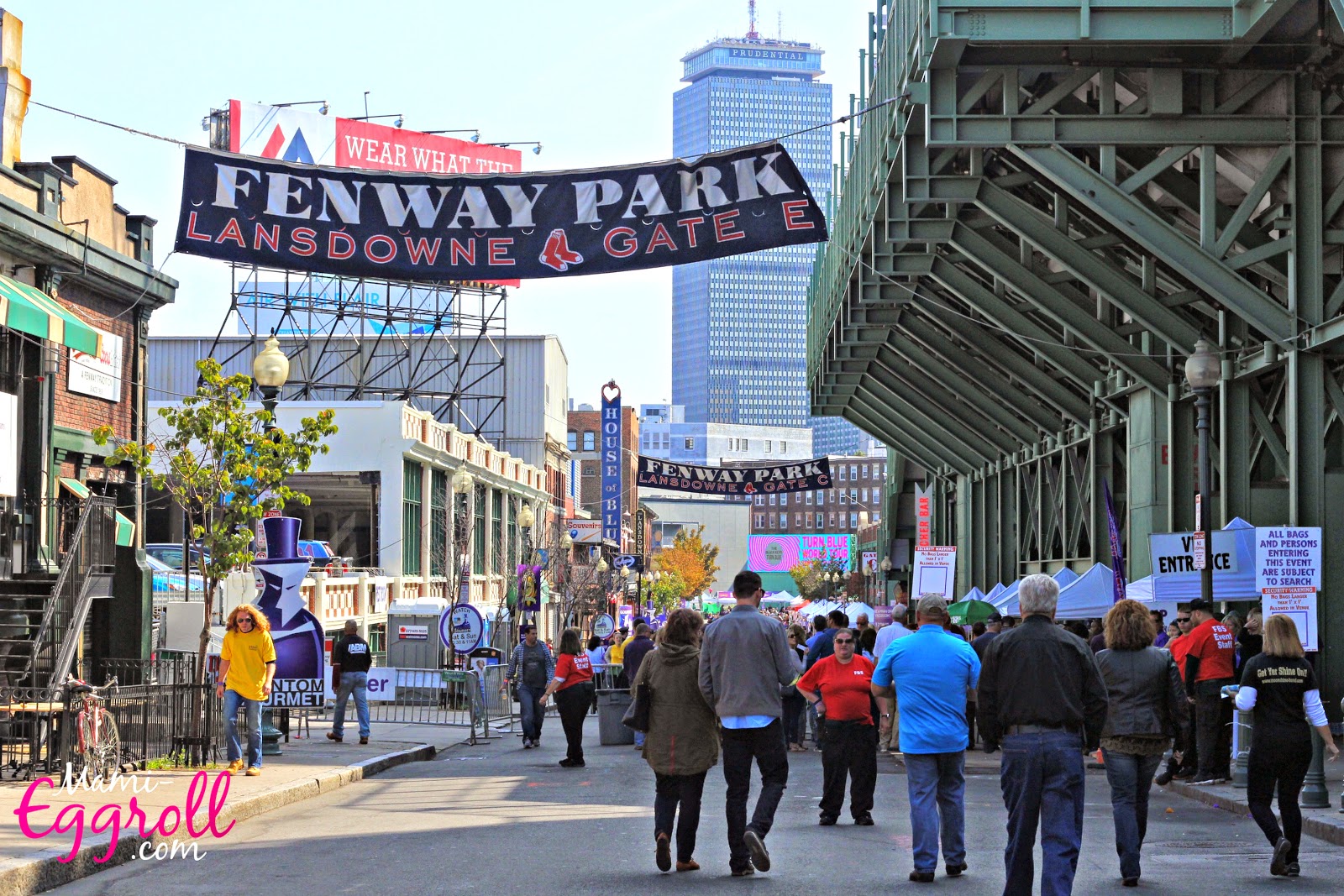 Once we hit the real food, I was overcome with excitement.  There were pulled pork sliders and chicken tikki masala.

Dunn Gahrin's served a meatloaf dish that did not look appetizing.  I guess meatloaf is one of those things that never looks pretty.  I wanted to give it the benefit of the doubt and have a taste and it was not good.

I was excited for Harrows Chicken Pies because I always see the commercials on TV.  The pie filling lacked flavor and didn't live up to my expectations.

Swissbakers had an assortment of pretzels and pastries to choose from.

There was a cool redbull + vodka cupcake, it tasted just like red bull!

I don't remember the name of the company but there was a vendor that had a great pressed Cuban sandwich, the Mo's favorite.

There was also a crostinti topped with BBQ chicken salad served by All Star Sandwich Bar.

Towards one end of Ipswich street, there were lots of summer backyard BBQ staples.  Since those dishes are pretty common, we only had a nibble of each so we wouldn't get too full.  We were already an hour into the event and there were no lines for the food.  The announcer kept giving us a count down for when the event would be open to the rest of the ticket holders.  That was a good warning. 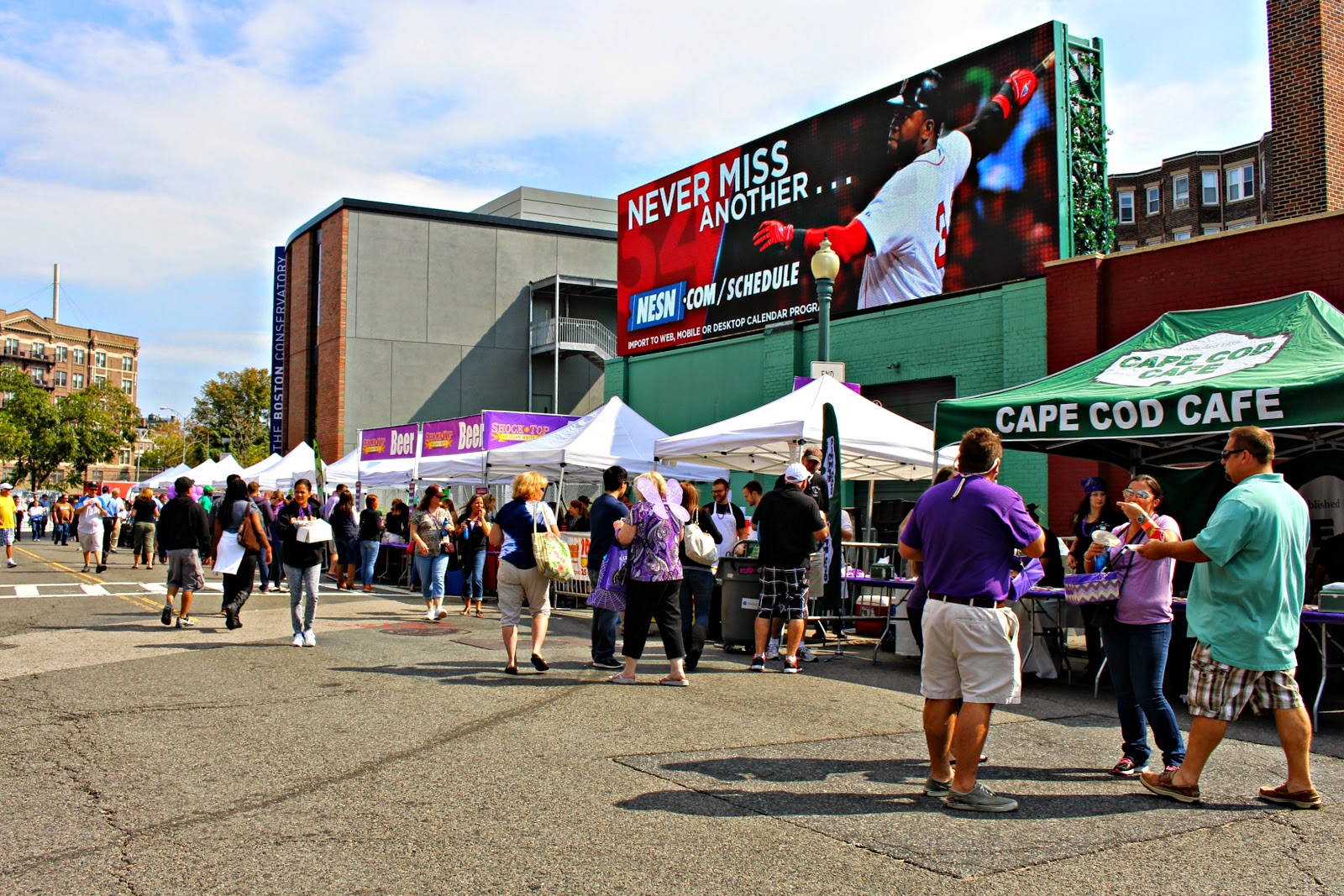 The Italian sausage was cut in 1/2 and served on a hot dog bun with all the fixin's.
The chicken connection had their staple fried chicken fingers. I really wished they served their delicious honey mustard sauce. 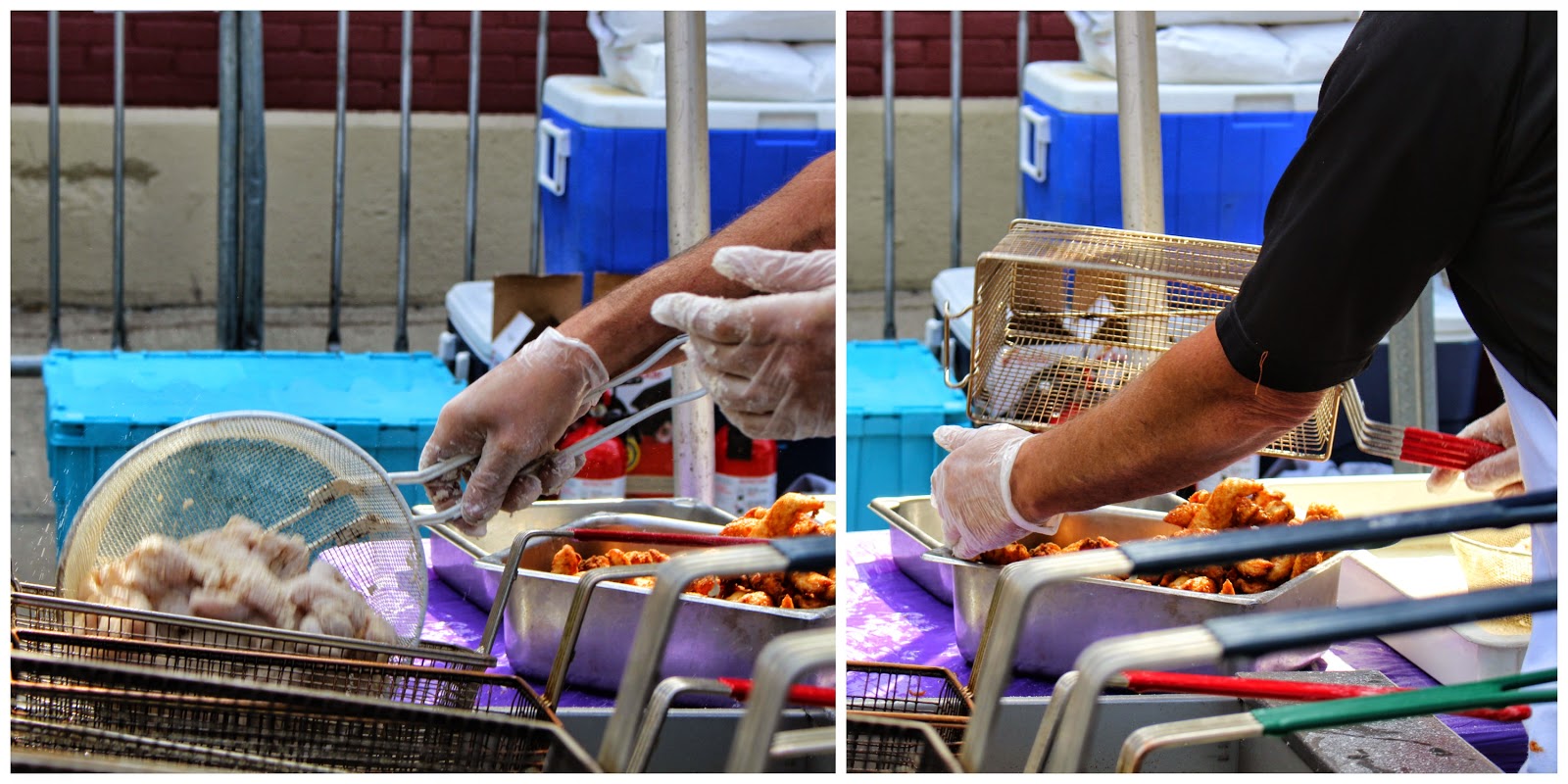 Instead of "sliders", Fuddrucker's actually made hamburgers and cut it into quarters and called them sliders.  I get it, it's more cost effective to do it that way but it was really messy and difficult to eat.
I really enjoyed Cabby Shack's "Clam Chowda." It was a tad bit salty but the flavor and consistency was all there.  The picture below doesn't do it any justice.


I didn't get a picture of Hancock's short rib mac and cheese but it was absolutely delicious. The meat was tender and juicy and the mac and cheese was rich and creamy.

Kowloon didn't serve their Saugus wings but had Singapore noodles instead.  I didn't care for it much.

I got really excited to see Great Wolf Lodge's tent.  They were giving away free bath towels and bloody Mary's with colossal shrimps. I think I had like 6 of 'em. 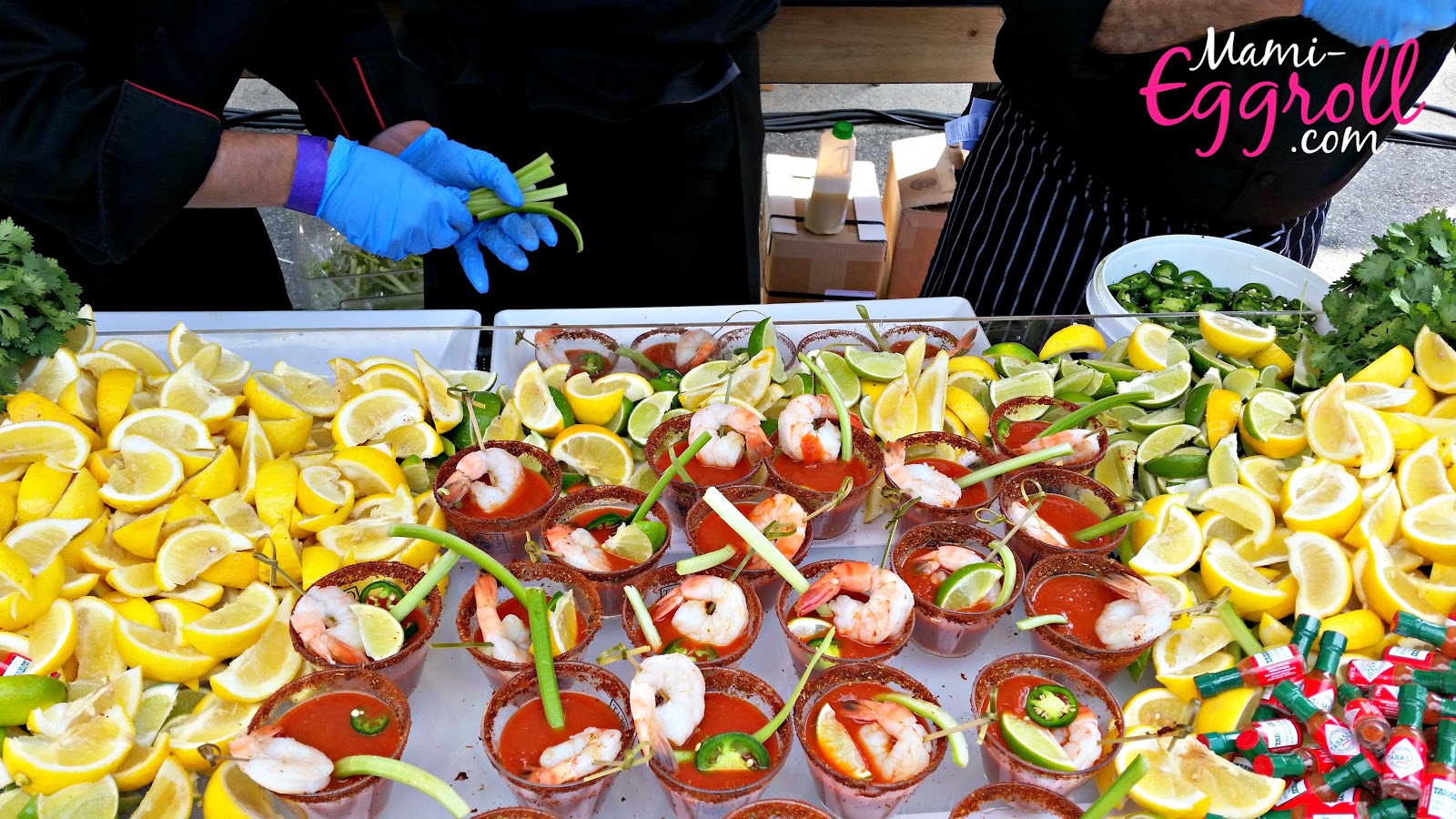 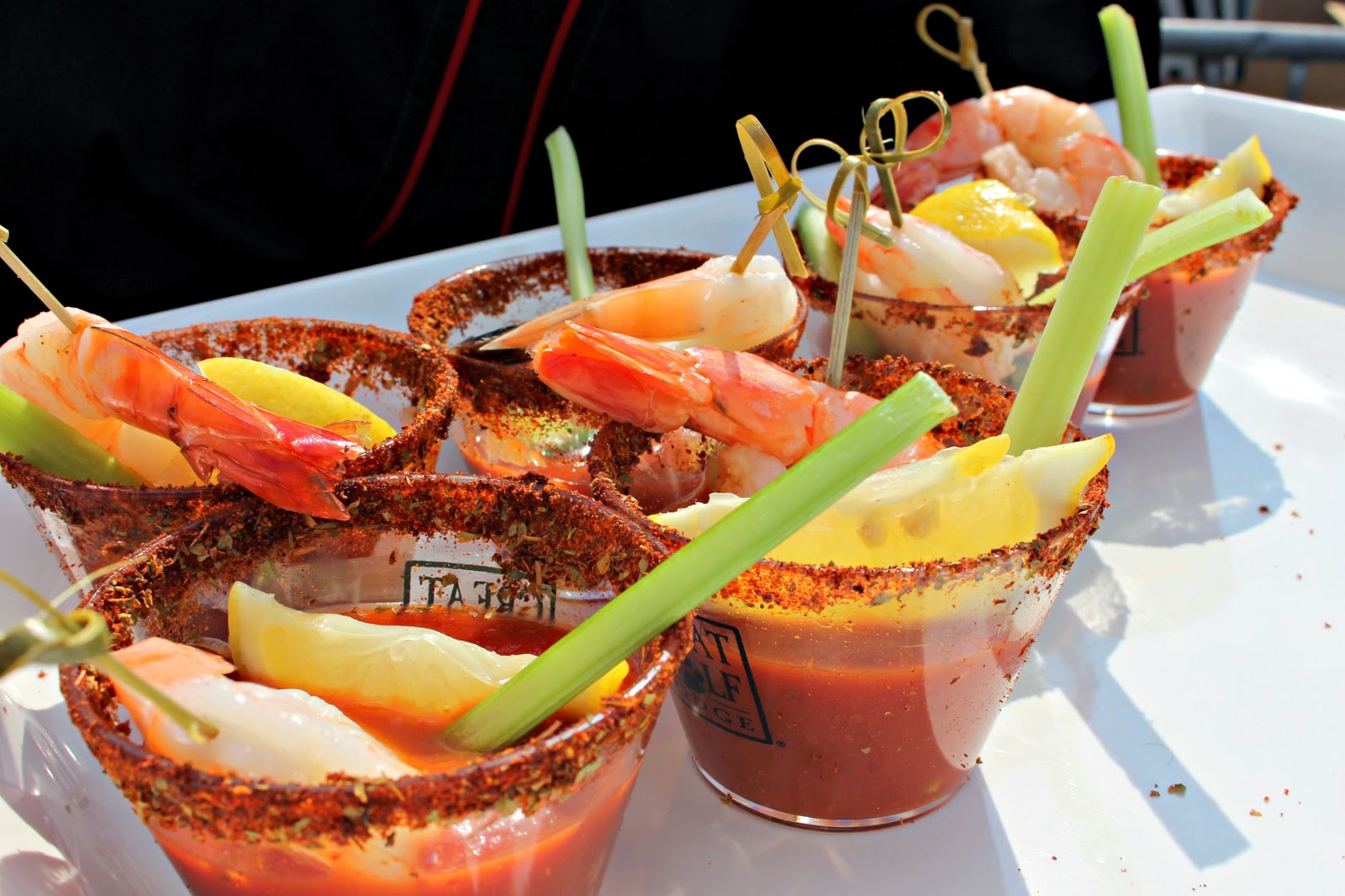 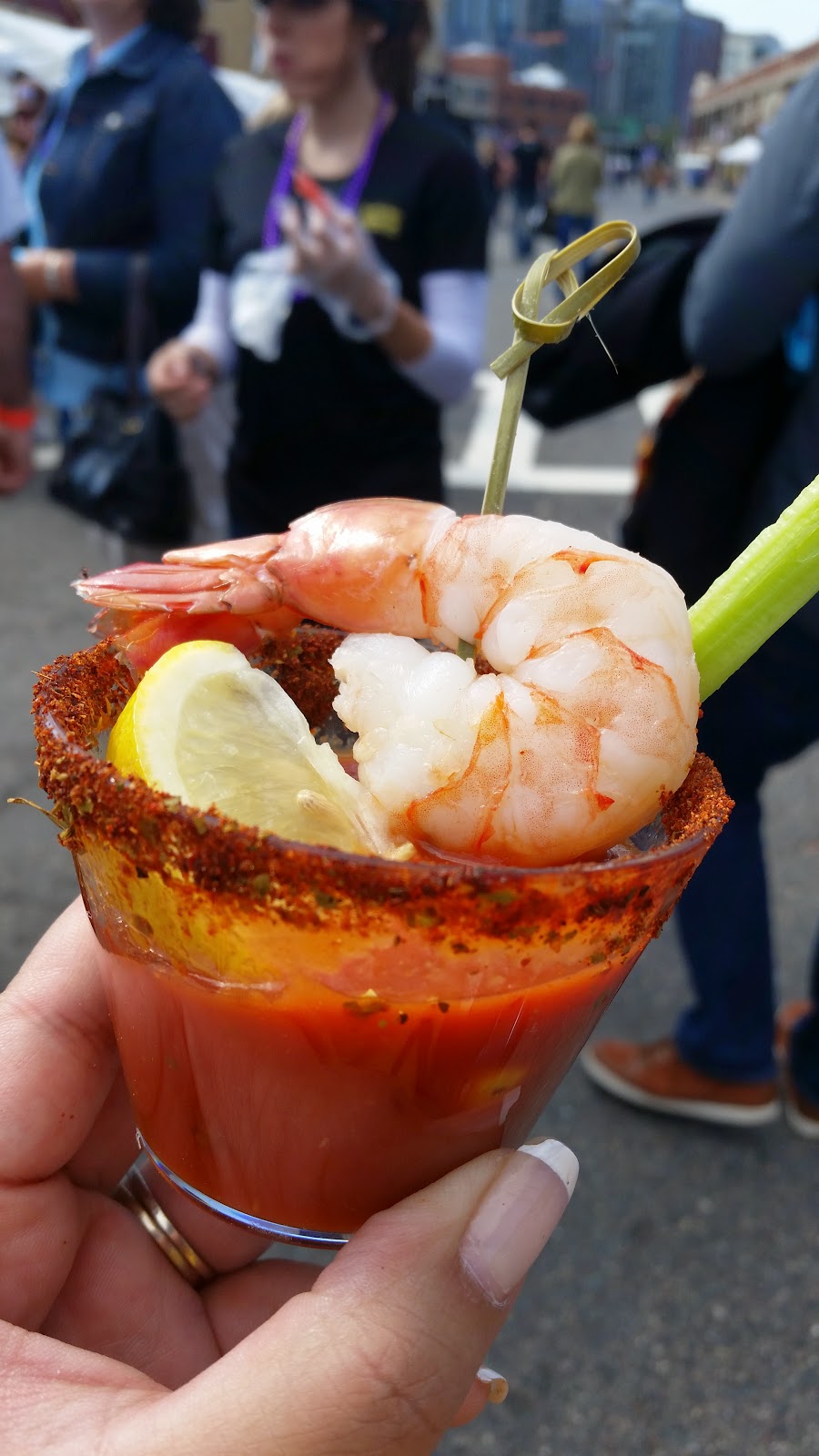 We spotted Dan Adelman and took advantage of the photo opp. 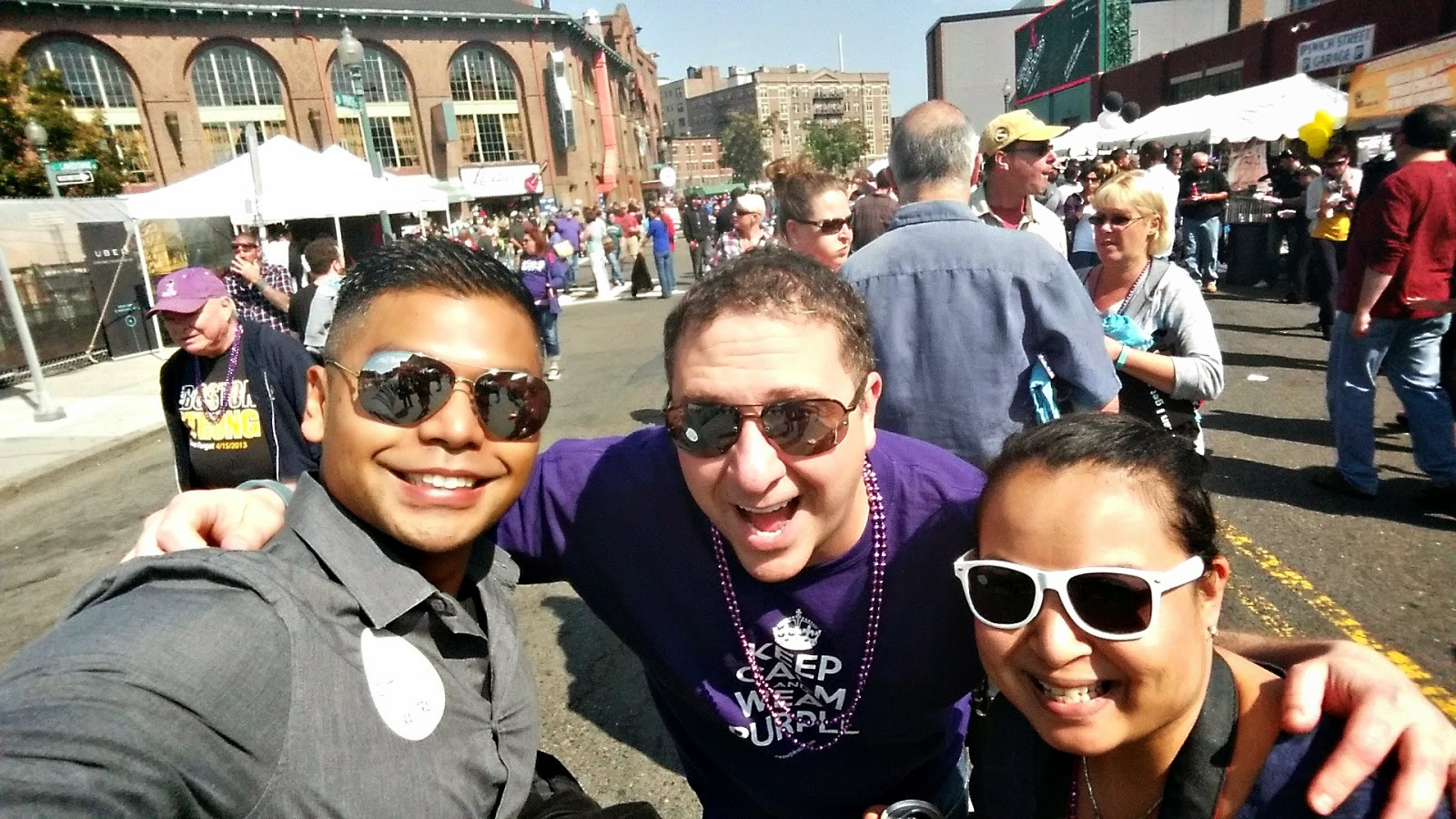 Hit Wicked had a mixed International offering including English Banger, fried plantain and jerk chicken wings.  I couldn't decide it it was English or Caribbean.  I think there may have been a jalapeno lemonade too? 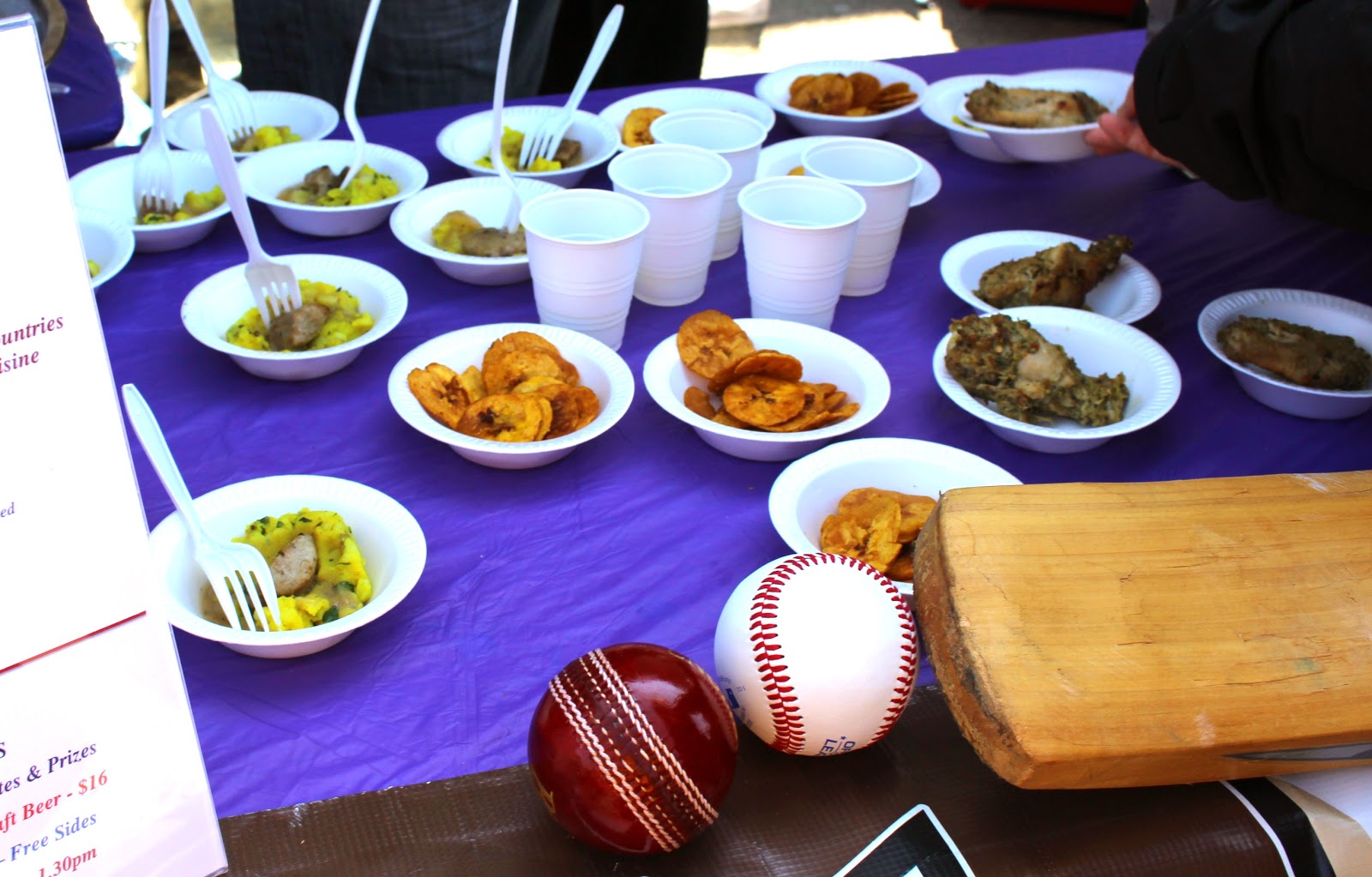 Summer Shack stuck with their seafood theme and served a clam "ceviche" type of appetizer with chopped clams, lime and tomatoes.

There were a handful pf pizza vendors at the Phantom Gourmet Food Festival.  Rail Trail gave out stickers that read " I prefer the F-Word" for Flatbread. 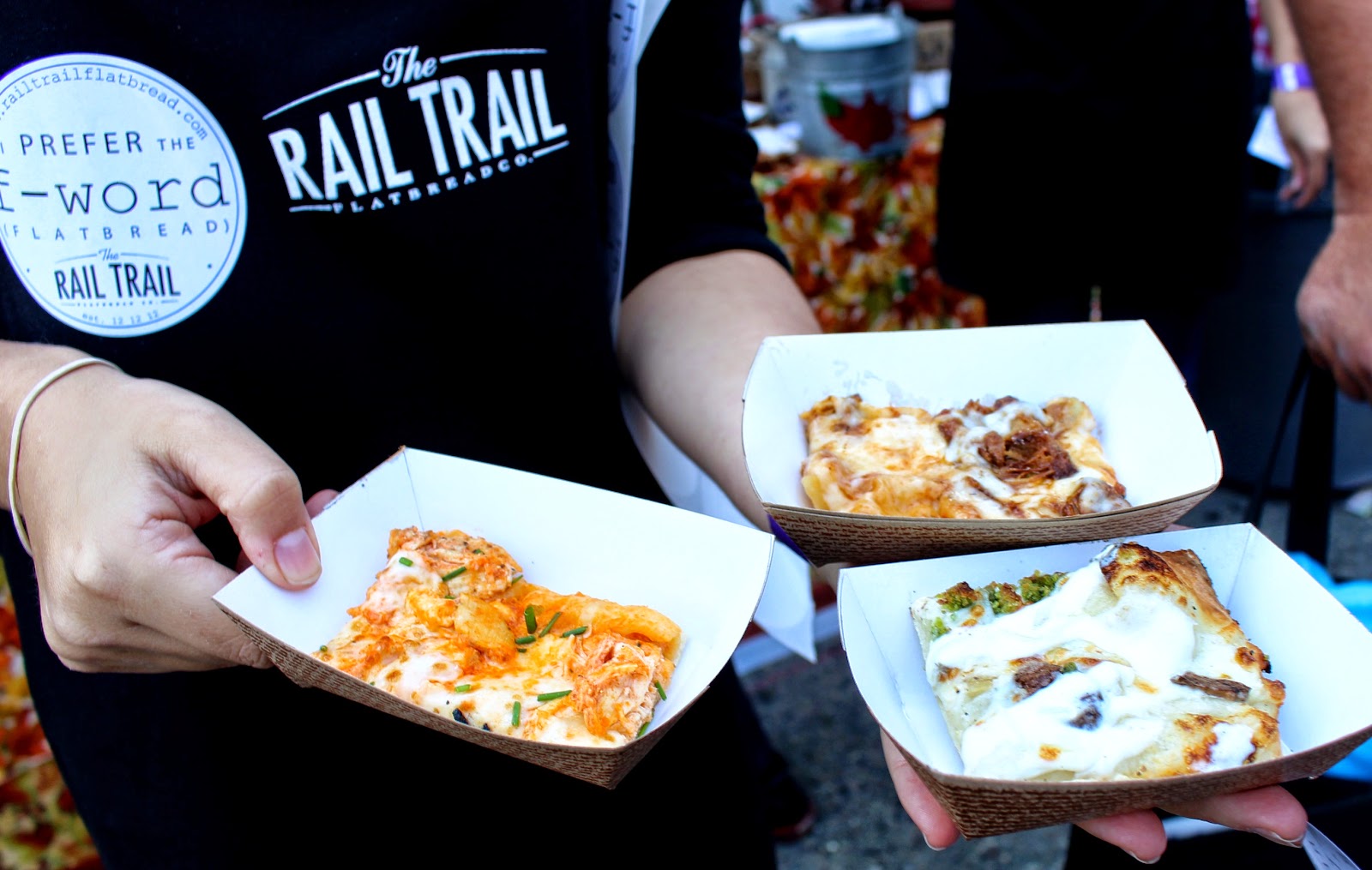 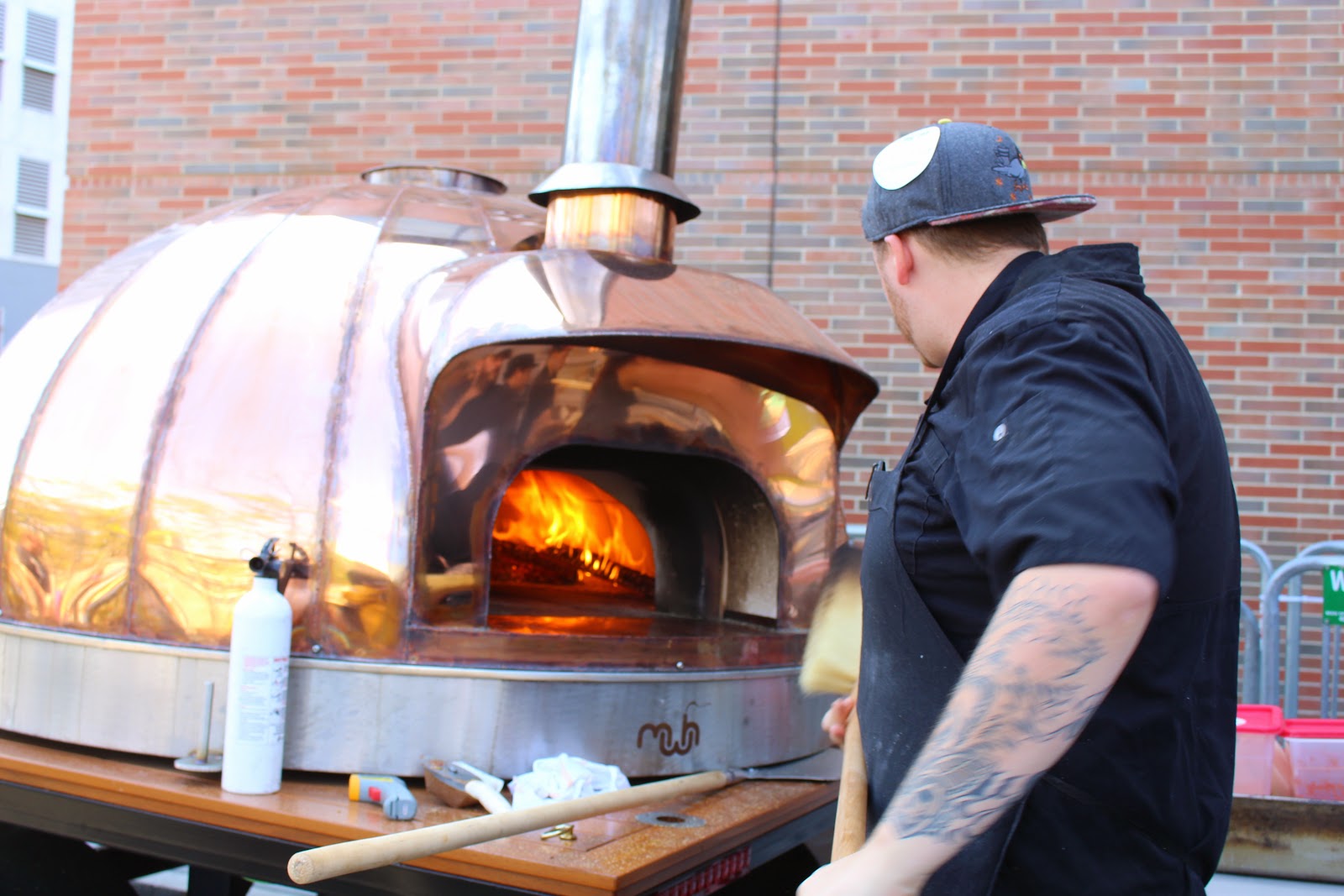 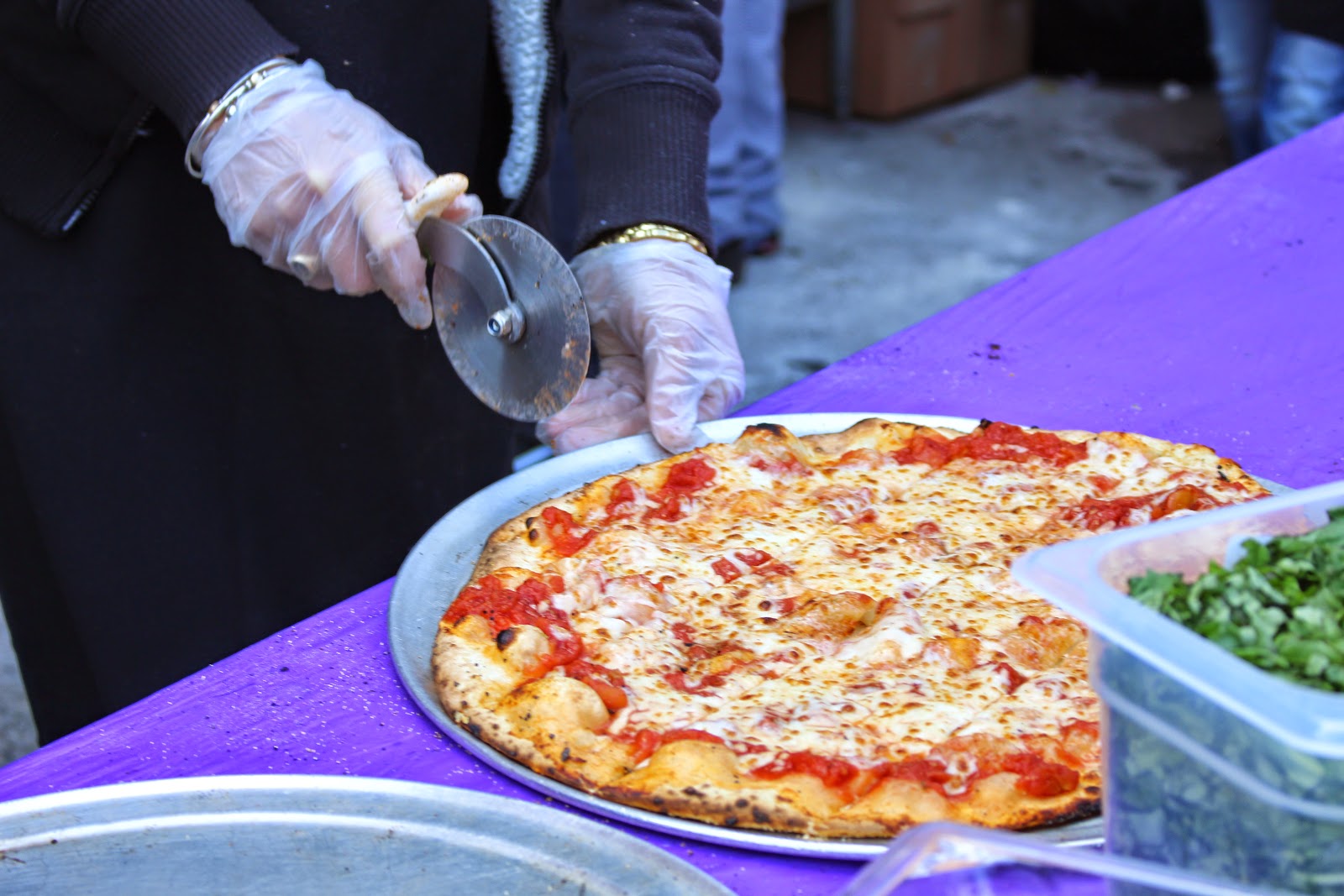 There was a grilled mushroom and spinach pizza.  A little too healthy for me,

I was pumped when I saw the variety of fried pastries served by Paaastelitos.  There was chicken, beef and ham.  The filling was very dry. 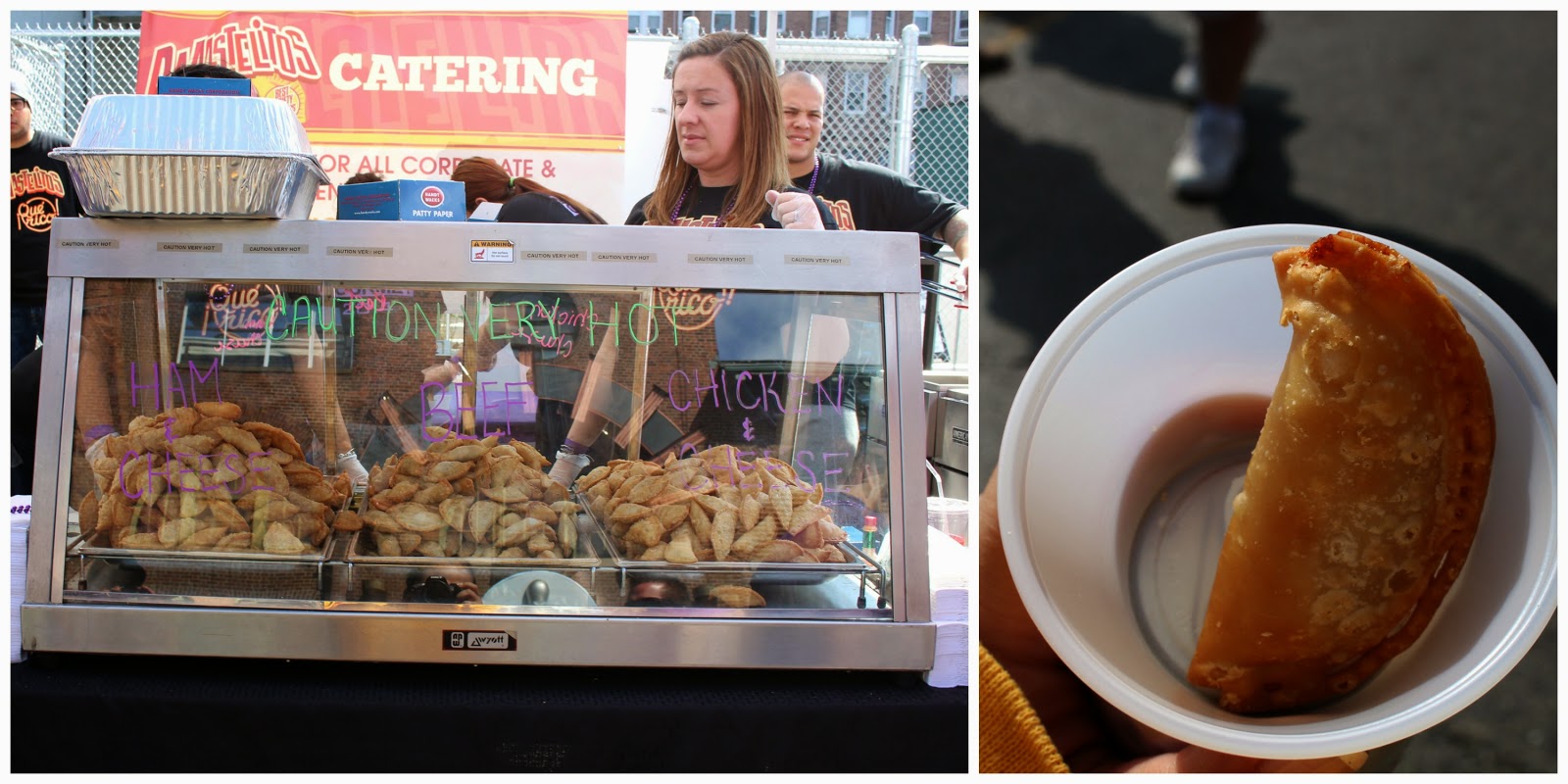 There were two lobster dishes that I tried.  The mac and cheese was good but the slider lacked filling and flavor.

Dunkin Donut was giving out free samples of iced coffee. 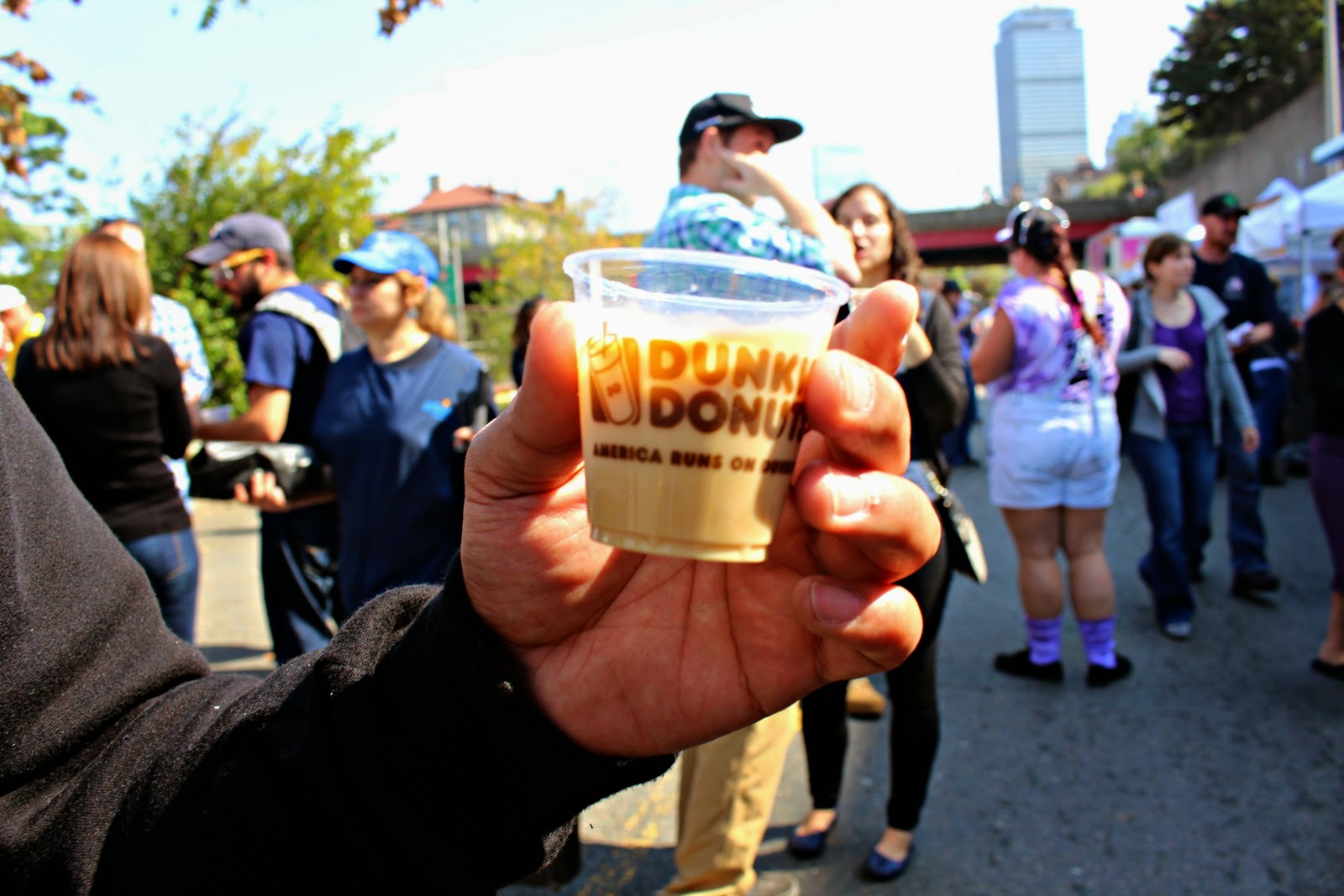 We ended our food frenzy with some a scoop of ice cream from the Ben & Jerry's truck. They were serving two different flavors.

I lied, I didn't' stop there, I had another shrimp bloody mary.

As soon as we made our way back, the area was completely full.  There were lots of other food stands that we missed.  I was just too stuffed to continue. ( I lied again.. because I actually ate some more at the VIP lounge)

Queues started to form by the food tents by the entrance.  I was so relieved that we were already stuffed as we watched these people get into the lines. 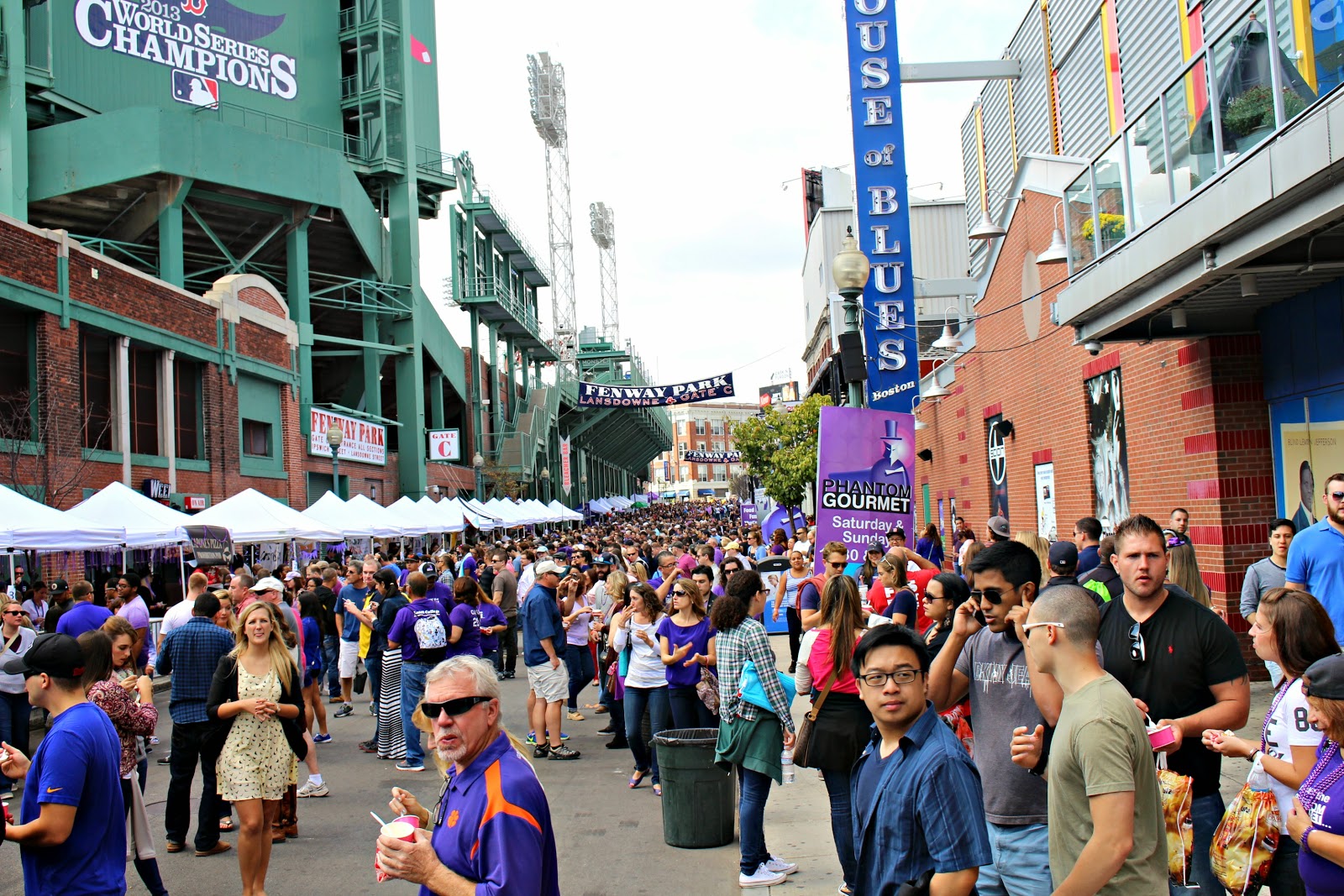 The VIP tickets were valued at $100.00 each and included admission to Ernie Boch Jr.'s private party with special catering and performances.  We didn't realize there was food being served until AFTER we were already stuffed.  Each vendor brought trays of food into the restaurant banquet room.  The dishes were set up like a buffet.  I liked that we were able to use the restaurant's bathroom facilities instead of using the outdoor port a poty's.

We found more chips and pies to take home with us.  Overall it was a great event! I'm not sure if I would shell out $100.00 per a person to do it again but it sure was a great experience.  The VIP experience is totally different than the regular admission.  Many people kept asking us where we got our freebies and they were all out by the time they were admitted into the event.  We did well and went home with lots of pies, popcorn and chips!

Thank you Zacha and Khemy for a great fun & food filled Saturday afternoon.  It was a beautiful day! I can credit you to being 5 pounds heavier than I was before I showed up at the event.