We only had a day in Mumbai before our flight back to the states so we didn't have a jammed pack itinerary for the 9th most populated city in the world.  We hired an air conditioned taxi for four hours to drive us around Colaba.
Along the way, we drove over the Sea link cable Bridge which cuts hours of driving time in the heavily traffic routes. 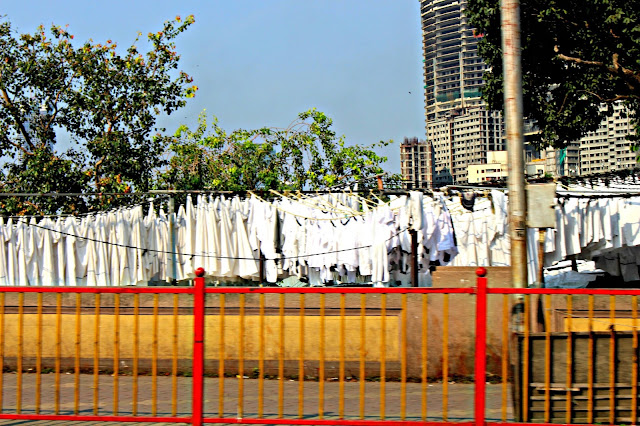 We did a drive by the beautiful Victoria Terminus (Chhatrapati Shivaji Terminus) which is a UNESCO World Heritage Site and a historic railway station in Mumbai.

We stopped near a train station where it was prime time for Dabbawala, a food delivery system in Mumbai.  We witnessed men wearing white kurtas delivering homemade prepared hot lunches to hungry workers in the city.  They handed hundreds of meals on bikes and rickshaws.  It was a pretty cool sight. I have no idea how they keep track of all the meals and people. 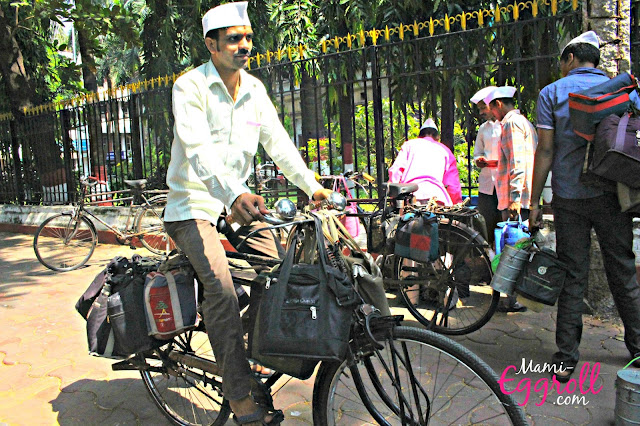 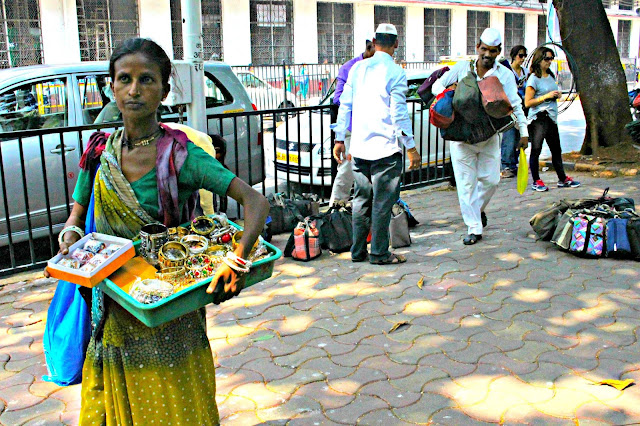 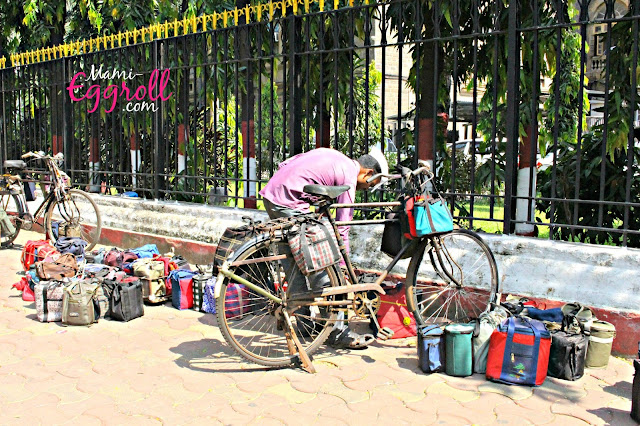 After some intense security, we went into the Taj Mahal Palace  to window shop at some of the high end luxury stores.  Unfortunately, we weren't allowed in the pool area. 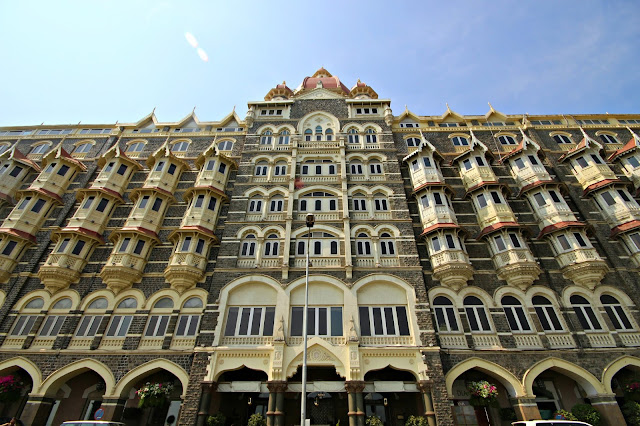 Across the heritage hotel stood the Gateway of India.  Completed in 1924, the monument was built during the British rule and was erected to commemorate the landing of King George V. It's been the site of three terrorist attacks . Currently, its a major tourist destination and a place for locals to hang out as well as the jetty point for points that operate from Mumbai to the Elephanta Cave. 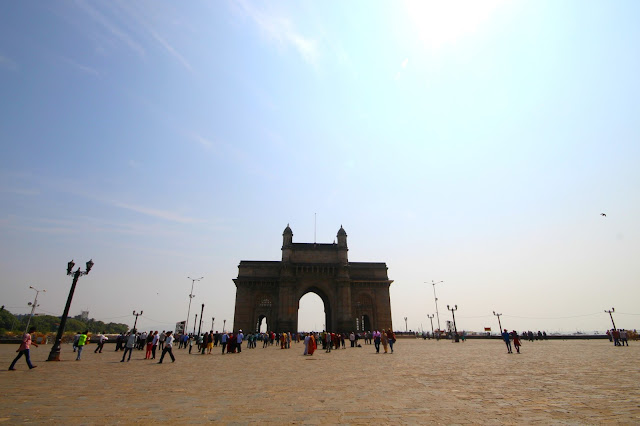 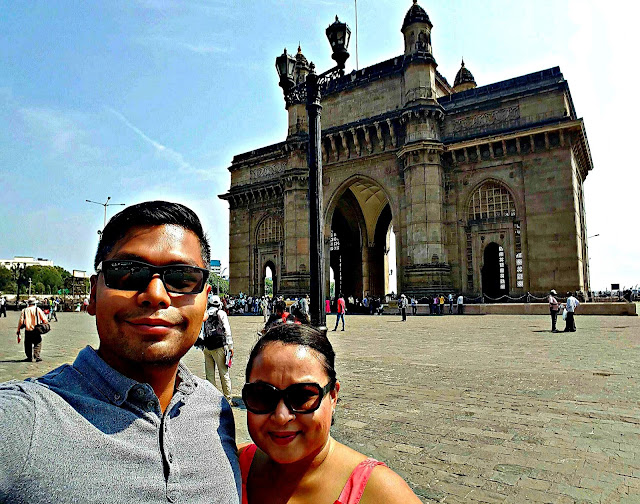 Located in the Colaba area behind the Taj Mahal Palace, Busaba serves both Southeast Asian Cuisine along with Indian dishes.  I learned about the lunch buffet on Zomato  and decided to give it a try.

For 800 INR (about $12.00), diners can feast on fresh appetizers and entrees as well as dessert. We decided to give it a try. The restaurant's entrance is pretty deceiving. It looks like a small eatery but once you enter, there's a bar/lounge area downstairs and 2 separate dining rooms on the 2nd floor.

We opted for the back room where there was more natural light. It took some time but the server came by and dropped off menu's and dipping sauces. 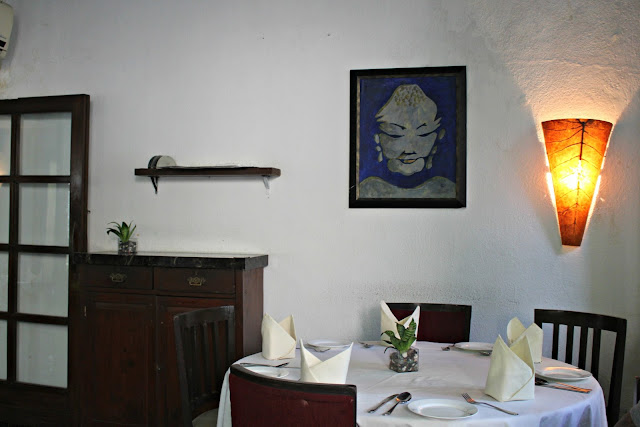 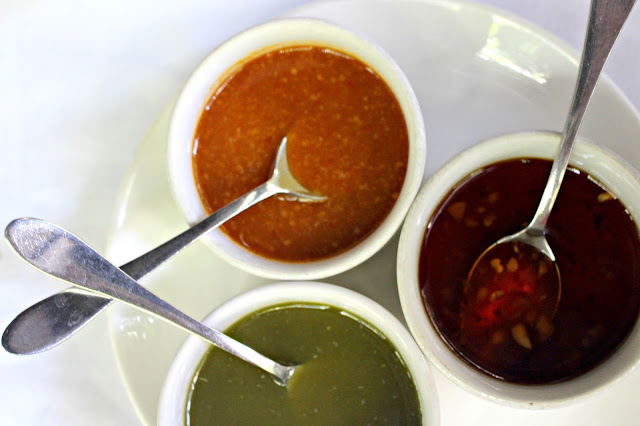 I ordered a chili margarita to start off my lunch. I was so hot walking in 100 degree Mumbai weather that I needed a nice cool refreshing drink.  To my disappointment, the drink was served sans ice. I have to admit, it was pretty tasty though.


We went with the all you can eat lunch buffet and the food was fresh and brought out tableside.  I loved the shrimp toast.

Some of the appetizers included fried vegetables in a spicy sauce ( I think it was called vegetable 65) and there was also a salt and pepper chicken dish. I wish they gave out white rice because the flavors were a bit to overwhelming and salty to enjoy on their own.

I could have done without the bland bean thread noodle salad and the vegetable noodles.

We were getting full but the food kept coming, next there was white rice, curry and minced chicken. I wished we had a chance to get a clean plate because everything kept piling on. It was a bit overwhelming.  The service seemed rush. There was only one waiter and one runner for the lunch crowd that consisted of 4-5 tables.


During our entree courses, I realized that the server was such in a rush that he skipped the chicken sate at our table.  I only realized it once the table near us sat down and received it.

For dessert, we each received a sad square bar with whipped cream and a sliver of kiwi fruit atop of it.  It was not good.

Verdict: I think the price we paid was decent for a high quality meal in a tourist area.  Service could have been better (if there were actually more servers). The appetizers were much better than the main entrees for the lunch buffet. Great cocktail!