A bachelorette party "Spa Day" At the Fairmont Princess Scottsdale

The girls and I wanted to pamper ourselves during the weekend trip to Scottsdale.  Sure we wanted to indulge but we also didn't want to pay premium prices either.  Since we went during off season, we lucked out and found some incredible spa deals through Travelzoo and Groupon. 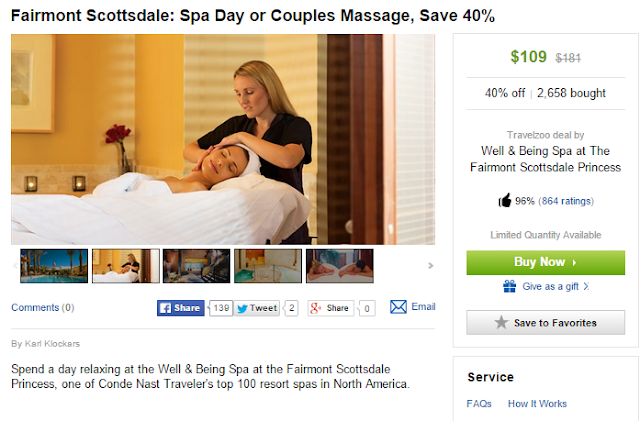 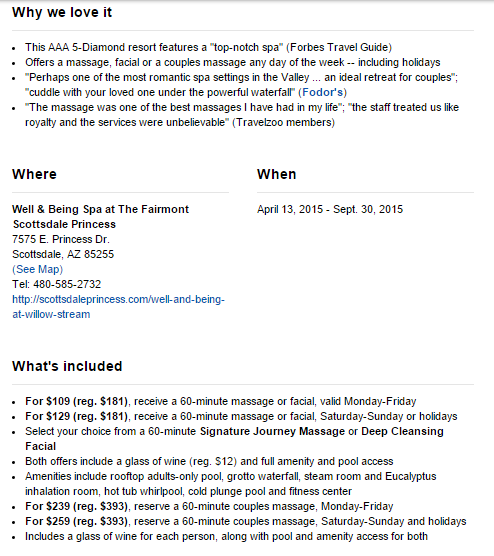 Most of the resorts were slashing their rates up to 75% off regular priced services.  After some research (via Tripadvisor and Google), we went with the "Spa Day" Package at the Well & Being Spa at the Fairmont Princess Scottsdale.  The spa is rated one of Conde Nast's top 100 resort spas in North America.  I've only been to one other "resort-type" spa and it was for MY bachelorette party in Miami (the same exact weekend as well).   I wonder where Fontainebleau stands on the list.

Since we were last minute guests, the best appointments we could get was at 8:45 in the morning, which meant we had to get there at least 30 mins ahead of schedule for the check in and tour.  Of course we got there on time (aka late) but the staff was very accommodating and friendly.  We paid our gratuity upfront and received a lavender sleeping patch as a souvenir that would later be used on the flight back home.

We had a quick tour of the spa facilities including the locker room, showers, steam rooms, plunge pool, waterfalls, roof top pool, meditating room, treatment room, aerial room and most importantly, the places with refreshment drinks and freebies. 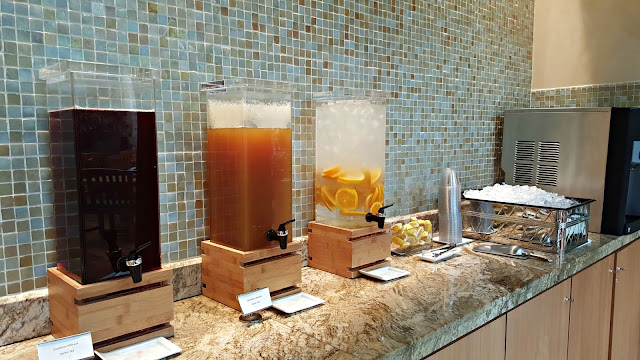 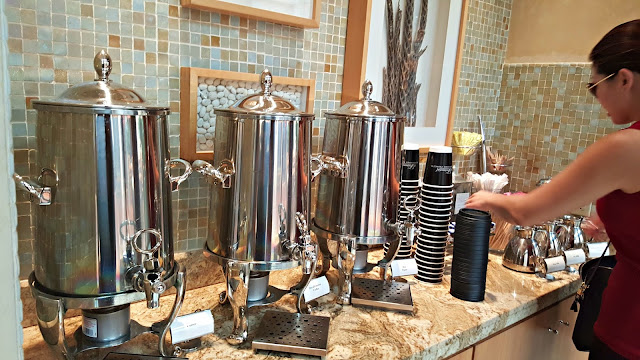 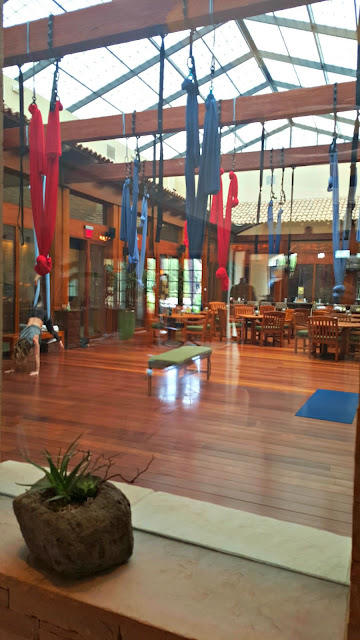 My friend Nat and I had appointments scheduled right at 8:45 AM, so we quickly changed into our bathrobes and slippers.  Cameras and cellphones are not allowed so we had to keep sneaking pictures and selfies in. 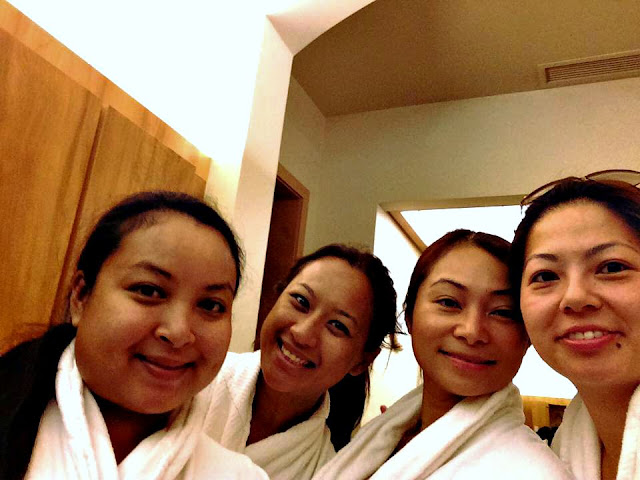 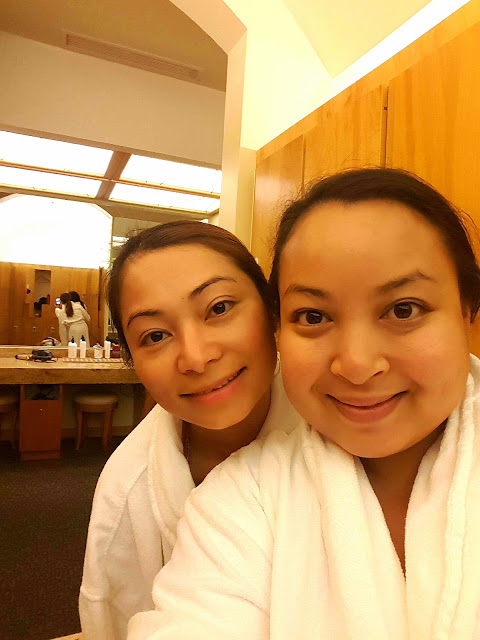 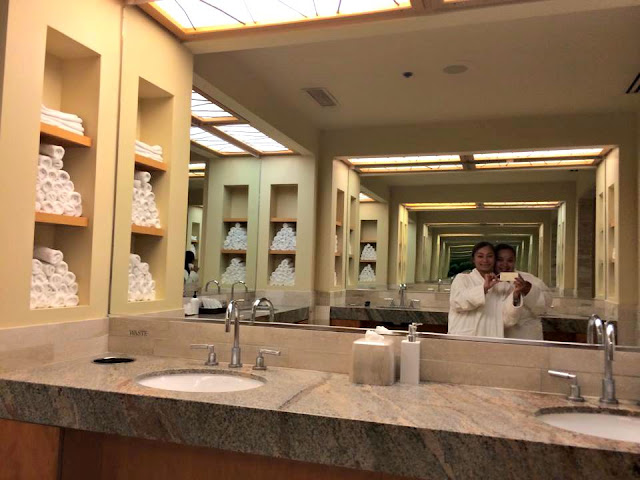 We both went with the 60 minute full body massage and it was completely soothing and relaxing.  I loved the orange aroma mist spray that the masseuse used during the treatment.  Don't get me wrong, I love my $5.00 beach massage in Southeast Asia but there's a different ambiance when your at a luxury spa.

We met up by the Jacuzzi and cold plunge pools with cups of iced cold "prickly lemonade" and had the area to ourselves for almost an hour.  The other girls were in the relaxing room waiting to be called for their facial. 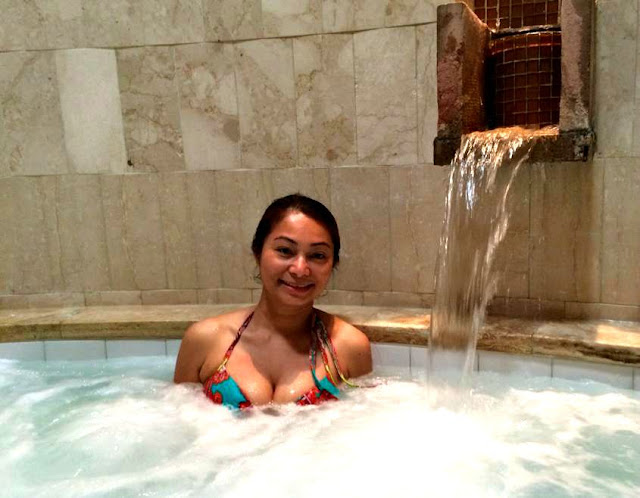 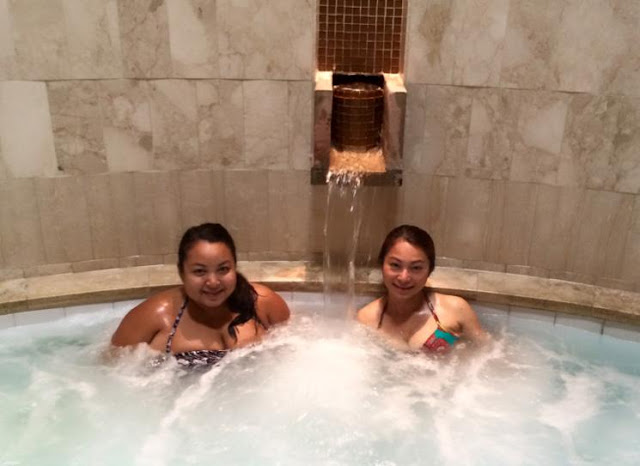 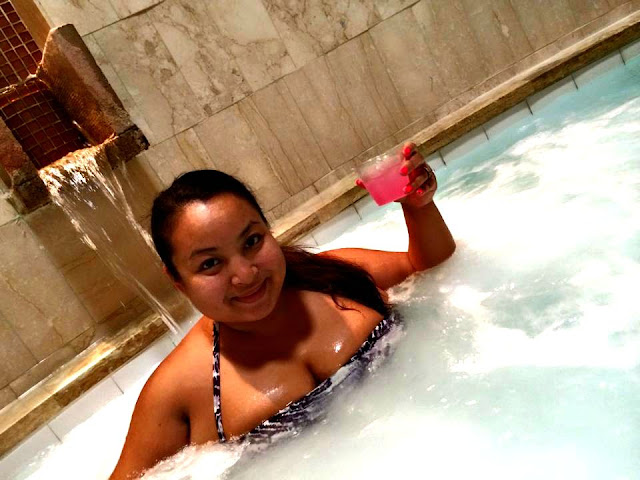 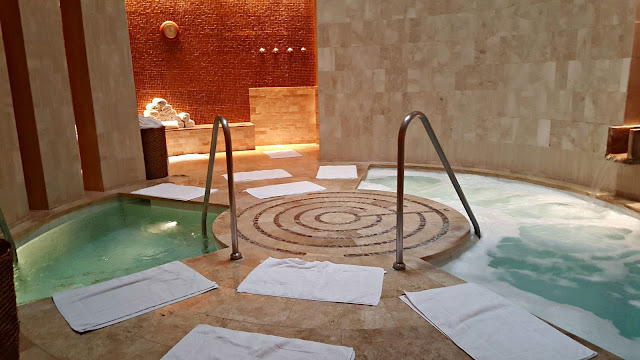 After the Jacuzzi got bombarded with a group of older women, Nat and I dashed and headed to the waterfall "grotto" area. 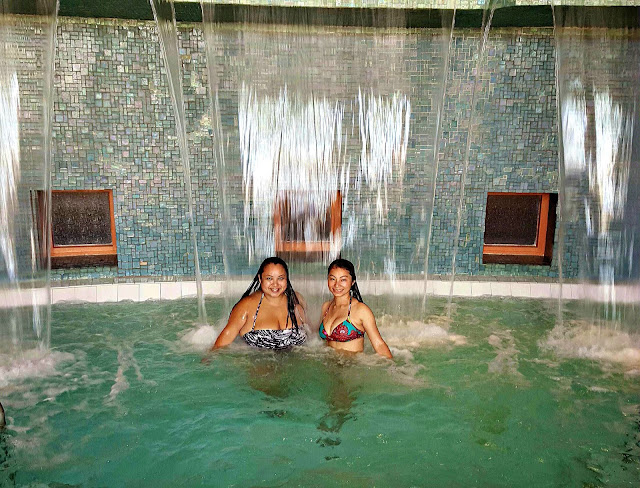 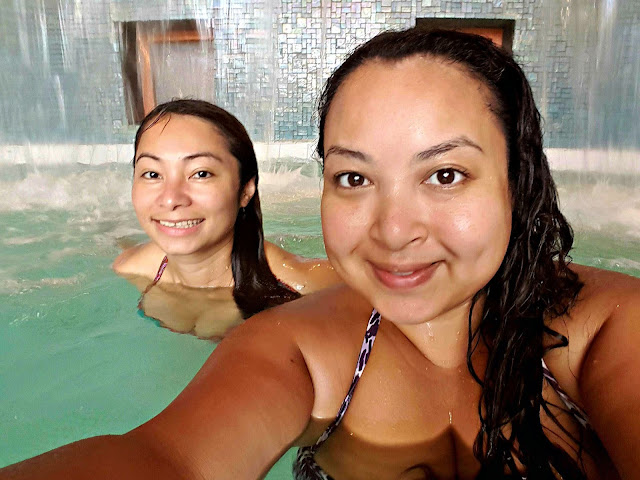 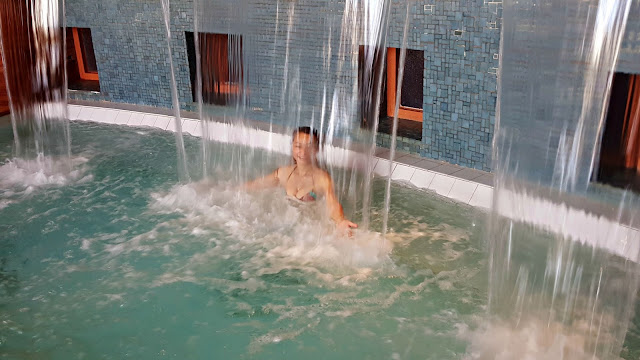 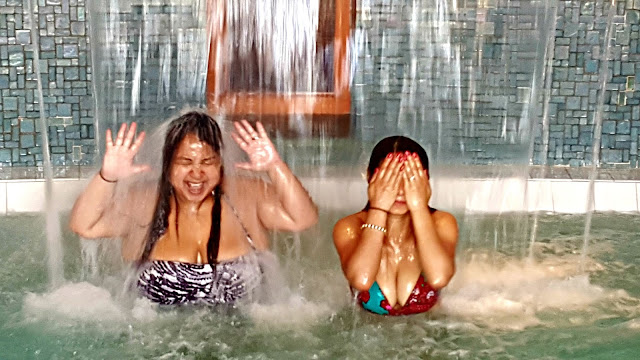 Nearby there was a beautiful courtyard with sun loungers and small tables for those who wanted to enjoy their lunch al fresco.. or take MORE pictures... 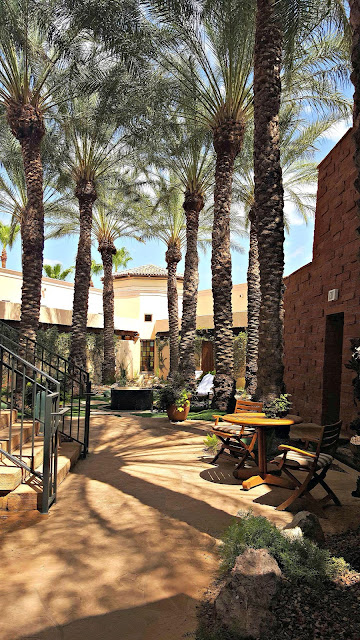 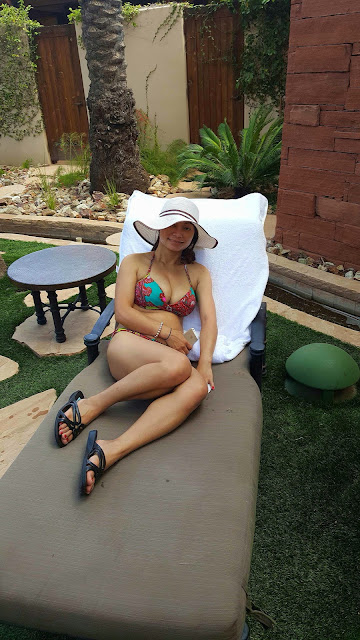 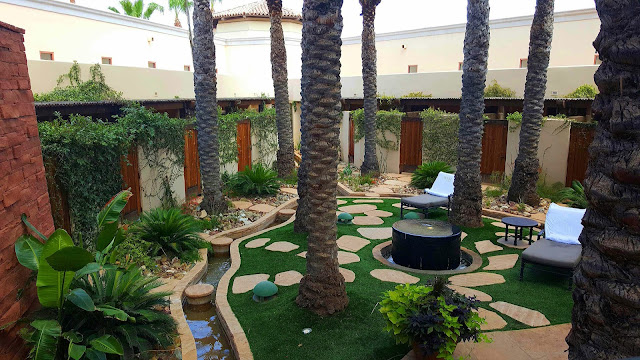 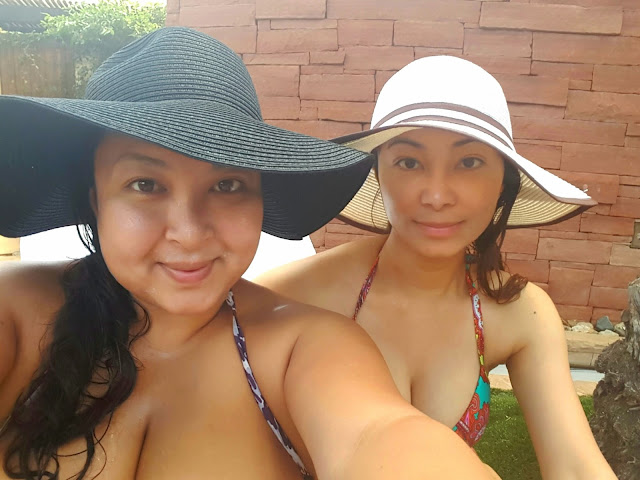 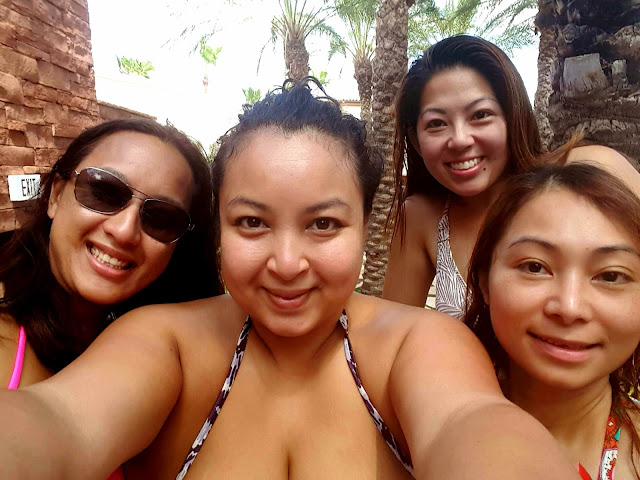 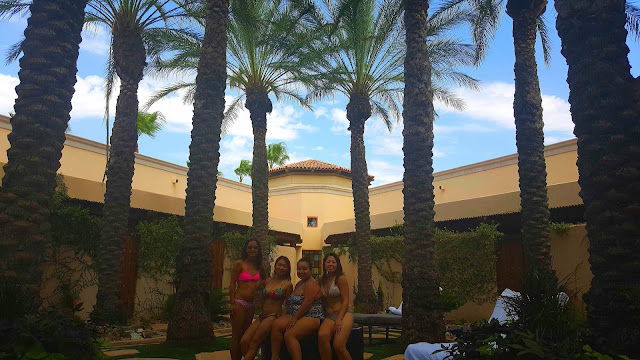 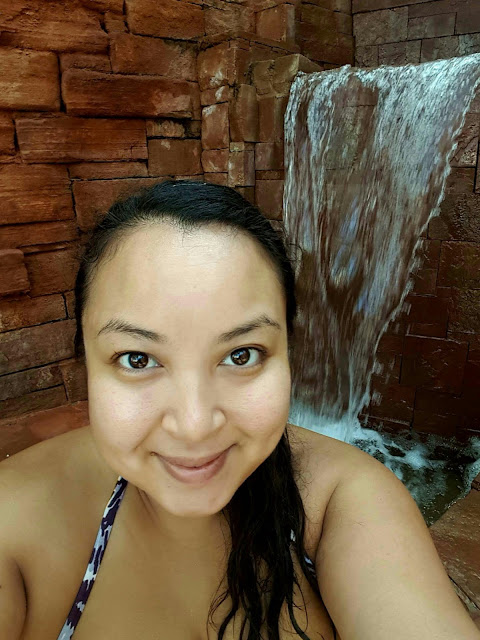 We made our way up the stairs to redeem our voucher for a free glass of wine.  I wished we had more time for me to sip & savor all 4 glasses (since no one else seem to want to drink at 11 in the morning) 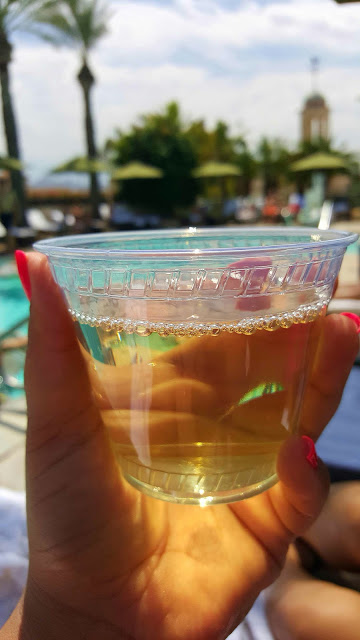 The rooftop pool was gorgeous. I could have spent 8 hours there and never leave.  There were poolside cabanas for rent, ones with spritzing water to cool you off, a bar and my favorite part, FLOATING BEAN BAGS! A bit tricky to get on, but once your on, you never want to get off. 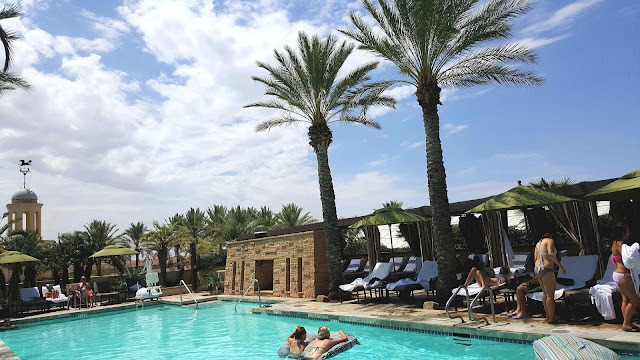 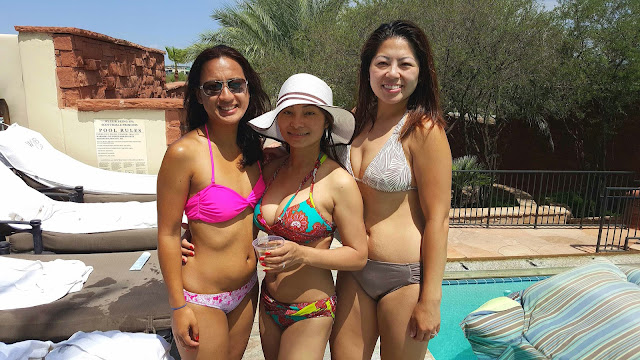 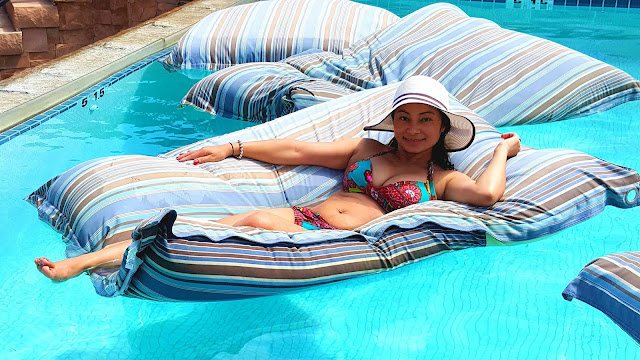 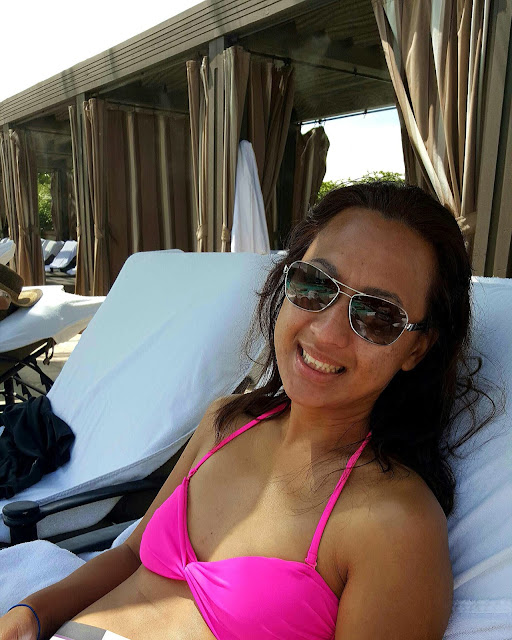 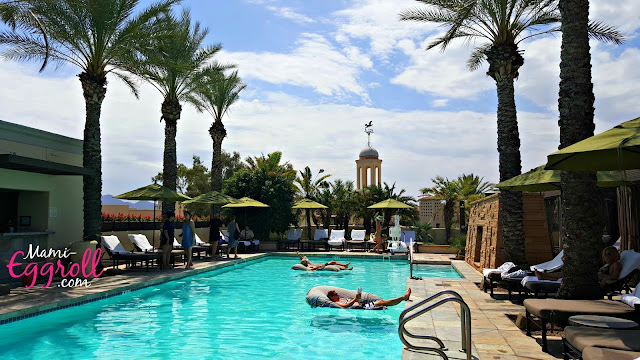 Although I was initially annoyed that we had an early appointment, I realized how grateful I was afterwards.  By noon, all the spa facilities were filling up and it was becoming crowded.  We no longer had the Jacuzzis or waterfalls to ourselves but were sharing with 8-10 other people, which was kinda awkward.  It was time for us to go.

It was a time well spent but we were STARVING, we rushed to go fill our tummies with Hot N Juicy crawfish. Until next time... 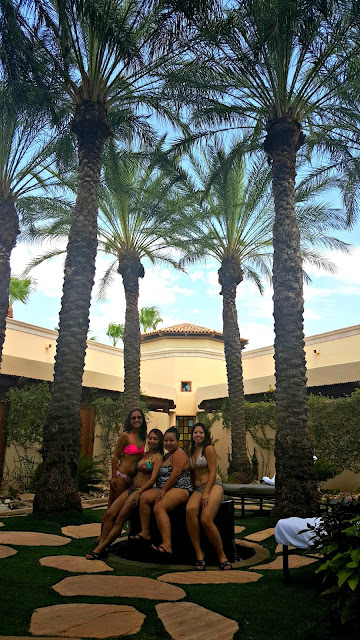