This isn't a "TRUE" Mai Tai recipe but it did the trick, got my buzzed and didn't leave me hungover, plus I got some FB messages asking for the recipe once I posted the photo on FB so I thought I would share.

There are a bunch of recipes online but the thought of buying different brands of rum, light, dark, almond flavored liqueur sounded a bit expensive.

I picked up a bottle of premixed Bacardi Mai Tai at a local liquor store.  The color and texture was not what I was accustomed to at the Chinese restaurants so I decided to "doctor" it up a bit. 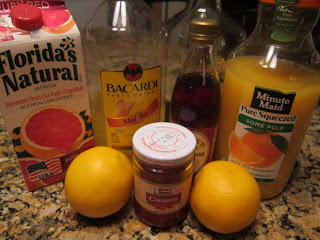 The consistency was too light so I added a splash of orange juice and grapefruit juice.  At only a mere 10% alcohol, the premade drink itself was not going to get me drunk so I added 2 shots of Gosling's black seal Bermuda black rum.

I topped it off with a tiny bit of grenadine and garnished with fresh oranges and maraschino cherries and an umbrella.
Newer Post Older Post Home