Unless you are at Tasty Dumpling in New York's Chinatown, you probably can't find 5 pork dumplings for $1.25 or less at a local joint but you can prepare your own for almost the same price.  Although I've never really made any dumplings from scratch, they are easy to prepare and serve.  I prepared 15 dumplings for less than $3.00 including the sauce.

The delicious delight has different variations and names that isn't limited to wontons, "pot stickers" Peking raviolis, and "Giozas" (Japanese).  The outside layer can also vary from a thin starchy paper to a thick dough-like consistency.

The most common dipping sauce that I've seen served with this popular dish, is a ginger-soy dipping sauce usually garnished with sesame seeds or scallions.

While shopping at HMART today, I picked up 3 bags of frozen pork dumplings for $10.00.  There were a few different varieties but I opted for, pork and chive, pork and shrimp and plain pork dumplings.  ($3.33 each)  If HMART is out of the way, they sell different brand of dumpling varieties at Costco's, Market Basket, Hannaford and local Asian supermarkets that can be prepared the same way. 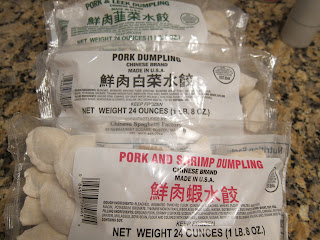 Since we had a big breakfast and planned on skipping lunch, I thought I would make us a snack before our late dinner.  That's the best part of these Asian delights, they store easily in the freezer and can be prepped up in 10 minutes or less for snacks for two or appetizers for a large gathering.

They can be served as finger foods or served as entrees boiled in chicken broth with noodles.


First boil 5 cups of water in a sauce pan or wok
Once water boils, add in the frozen dumplings
Once the water boils again and the dumplings float to the top, time it for 1 more minute
Be very careful not to overcook the dumplings or the flour will breakapart and become gummy
strain the dumplings in a colander or strainer 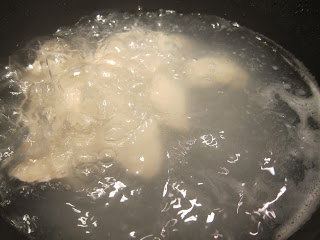 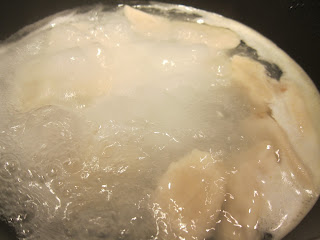 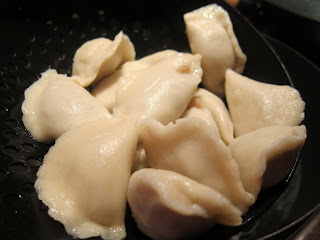 (I try to use the least amount of pans as possible in the kitchen so I resuse the same pan again.  Rinse out the pan and use a paper towel to dry and return to burner)

Once the pan heats up, add the vegetable oil and turn the temperature to medium heat.  Give is 30 secs to heat up.  Add the strained dumplings. Be very careful of the oil splattering.  This is caused by any excess water left on the dumplings.

Let the dumplings pan fry for a few minutes on each side until golden brown. 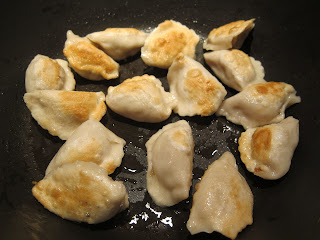 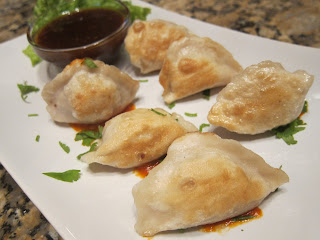 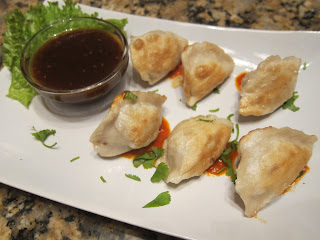 PS. I usually make my own ginger soy sauce from soy sauce, fresh ginger and sesame oil but I already had a premade bottle from my last trip to Trader Joe's.  If you don't feel like making your own sauce, I recommend theirs as its thick and not too salty as other brands on the market. All the "Asian" influenced    products are labeled under "Trader Ming's", thought that was cute.