Happy Thanksgiving...and to many days of Leftovers! 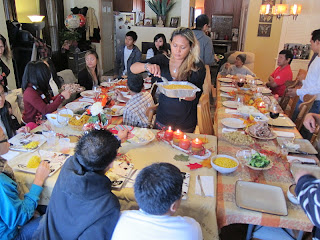 Every year, we always have a surplus of food for our Thanksgiving meal.  I suppose our families lives by the saying, "We would rather have plenty than NOT enough food for everyone."  For my Thanksgiving Day festivity (Part I), the Mo and I hosted 25 people, 90% being his side.

We usually do it buffet style but this year, the Mo created a seating arrangement out of mismatched chairs and white folding tables using whatever candles and fall decor we had.  Although it wasn't something that would be featured in Martha's Stewart's Living magazine, I thought it was quite lovely and the guests appreciated having a seat and eating their meal without the dogs jumping on them.

We had 2 turkeys, a large pork shoulder and 11 different side dishes not including dessert.  Of course, we had plenty of leftovers, EVEN after the teenagers went for round 2 a few hours later. 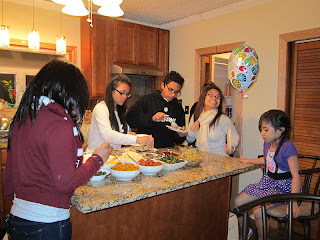 I knew we would be eating the leftovers on Friday, but I didn't want to eat the usual Turkey sandwiches or turkey salad, so I did a few different things today.


For breakfast, I made the Mo a turkey, bacon and cheddar melt omelette with mushroom using the leftover turkey. 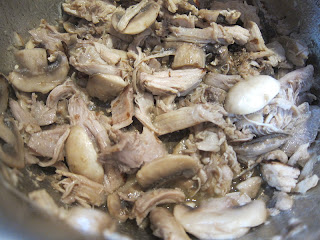 For myself, I made a spinach and onion omelette using the remainder of the creamed spinach from yesterday's side dish.

After breakfast, I added all the ingredients for Weightwatcher's Turkey Chili Verde recipe to my slow cooker.  In addition to using the lean ground turkey, I also added 2 cups of shredded leftover turkey breast to the chili.  Instead of cooking it on the stop top as the recipe suggests, I set my slow cooker on High for 4 hours and went black Friday shopping. The original recipe is 6 points per a serving, but since I added additional meal, I'm giving it 8 points per serving. (It's probably even less) then another point for cheese.

For dinner, I made the Mo turkey and roasted pepper quesadilla using the same leftover turkey meat and leftover corn from last night. 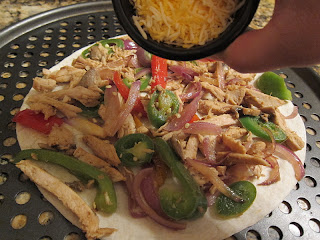 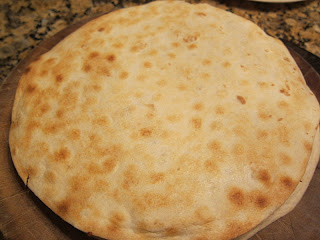 For tomorrow's Thanksgiving Dinner part II in CT, I signed up to make a simple Spanish rice among other things.  Although, I usually use chicken breast, I substituted the chicken with leftover turkey breast and the rice still came out delicious! (I only had a taste, not a plate) I kept the rice basic since it would be served as a side dish.  If it was going to be a main entree, I would have added olives, pigeon peas, bell peppers, ham and onions. 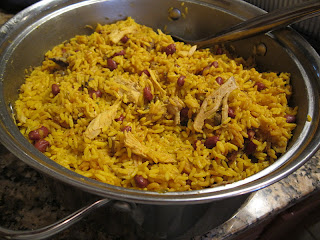 Bottomline, Thanksgiving leftovers doesn't have to be boring. Be creative and try something new.
Newer Post Older Post Home