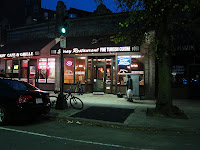 In preparation for our trip to Turkey, we wanted to familiarize ourselves with the Turkish cuisine.  We are a frequent customer of Restaurant.com, a website where you can purchase prepaid gift certificates at deeply discounted and saw the restaurant featured in the Mediterranean cuisine category.  Intrigued by the online menu, we purchased two gift certificates, one at a $25.00 value (for $ 2.00) and one at a $50.00 value (for $6.00).

I thought it was funny that my Cambodian uncle shares the same name as the restaurant.  His name is Saray, and based on Wikipedia, Saray is a Turkic word of Persian origin (Persian: سرای sarai) which means "palace".  I couldn't find any correlation between Turkey, Persia, or Iran with Cambodia.  I guess its just a coincidence??

We originally planned on going just the two of us for an anniversary dinner on a weekday but since there were rush hour traffic delays, we decided to move Turkish dinner to Sunday and invited out my brother and his girlfriend to celebrate her birthday that usually takes place before, on or after Thanksgiving Day.

We met up for an early dinner at 5:00 PM and found ample parking which was a pleasant surprise in the usually crowded streets around Boston University.  We walked to the nearby grocery store, Star Market to pick up a 6 pack of beer since I have read on other reviews on Yelp that one could B.Y.O.B. since they do not have a liquor license.

The restaurant was very clean and the decor was simple but charming.  Upon arrival, the waitresses sat us and provided us with our menus, water and bread quickly.  There were a few other patrons dining in the restaurant.

Although I really like the hummus, I wished they provided something to dip it with.  I'm not sure if its a Turkish or American tradition, but I've always had hummus with pita chips, crackers or vegetables.  The Zucchini pancakes were also tasty and interesting.


The fried cheese pastry resembled a Chinese crab rangoon and I felt like it needed some kind of dipping sauce. The pastrami was a bit too salty for me and others also agreed.
We ordered an array of entrees and each had a sample of the different dishes we ordered.  On our table, we had: Stuffed Cabbage Roll, "Hunkar Begendi" (Sultan's Delight), Doner Kebab, and Char Grilled Chicken Kebab.  The meat portions were smaller than expected.

The filling of the stuffed cabbage roll was lamb and rice and the taste and texture resembled corn beef, except that it didn't have any potatoes. 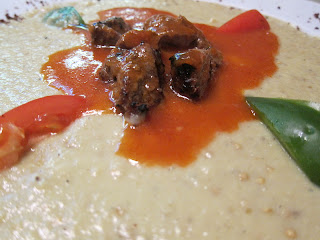 The most expensive dish, the "Sultan's Delight" had much to be desired for.  Although the lamb was delicious, there was only 5 meager pieces that looked like it was actually a larger piece cut into 5.  The eggplant puree was tasty and flavorful.

The Doner Kebab that was supposed to be sliced lamb and beef looked like it was only one type of meat instead of two.  There was no distinguishment among the lamb or beef.  Lastly, a few of us agreed that the rice may have been under cooked as there were some hard grains.


The grilled chicken kebab was the tastiest dish that we ordered. I think I can live off of chicken kebabs for two weeks in Turkey.


As a finale to our meal, we shared a pudding that was topped with pistachios.  It was just OK.  We also got delicious Turkish coffee that set us back $ 4.00 for a tiny cup. 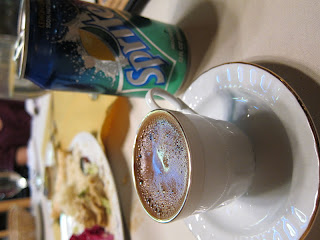 Overall, the service was extremely nice.  Our water goblets were never empty and they turned off the lights and brought out a small dessert for us and sang "Happy Birthday" to the birthday girl.