The Mo has become quite the "miles" expert and booked us one way Korean Air Prestige Class tickets from JFK to ICN and from ICN to REP (Siem Reap, Cambodia) using accrued miles earned from previous trip in addition to miles earned from credit cards.  The 2 flights costs us about 75,000 SkyTeam miles each along with $200.00 addition for airport taxes and fees, which is a STEAL compared to the average costs of $3,814.00 for the flights. 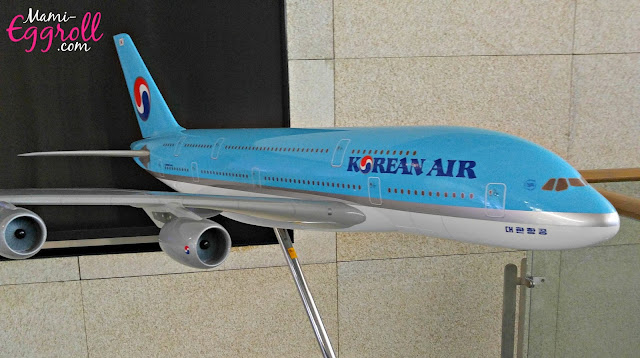 Since Korean Air only flies from JFK on the East coast, we had to use 13,200 True Blue miles to get us from Boston to JFK on JetBlue.  We considered driving but it would be SMACK in the middle of rush hour traffic and who wants to drive 4 hours + after a long vacation back home.

Once we were in New York, we had access to the Korean Air lounge. It was nothing to write home about. There were instant ramen noodle soup, crackers, cheese and some finger sandwiches, On the bright side, there was a bottle of Remy Martin XO for self pour.  Since we have Priority Pass Lounge Access , we also checked out Air France's lounge.  It was very nice but the food selection was sub par and everything looked old and disgusting. 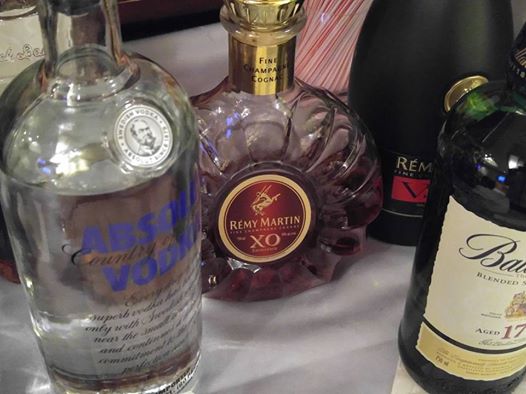 Boarding was on time and since we were Prestige Class ticket holders, there was no rush to get to the gate.  We arrived, went through the separate gate and climbed the stairs to the top deck of the 747 aircraft.  We had "Prestige Suites", that boasted 74 inches of leg space and direct aisle access.  It was definitely spacious! I'm so used to being squished in a 3 seat configuration by the window in economy so I definitely appreciated the extra space.

We were greeted by friendly staff who took our jackets and hung them up and asked for our meal requests.

Since we were still on "American" territory, we were offered juice and water in lieu of the usual champagne and spirits before takeoff.  I didn't miss it at all since I was still exploring my seat, opening all the storage compartments, learning the seating adjustments and of course, taking pictures! 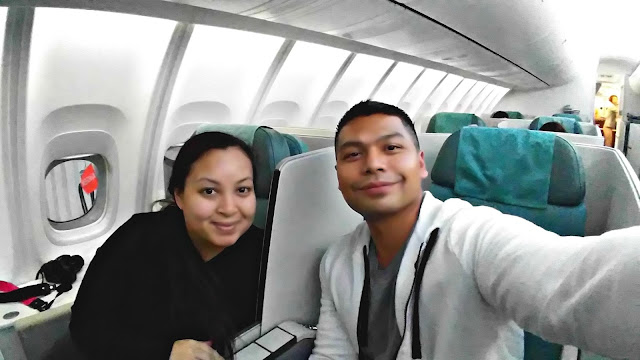 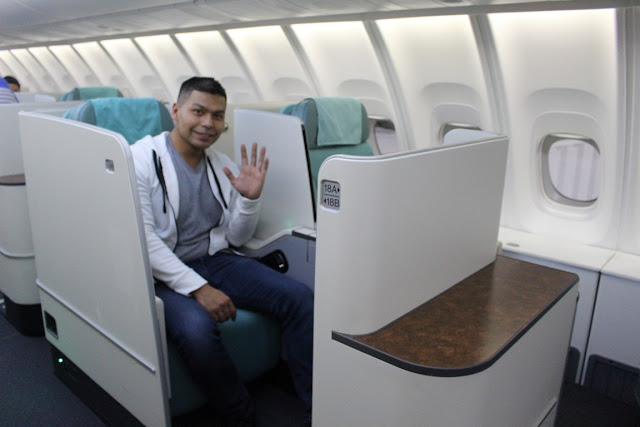 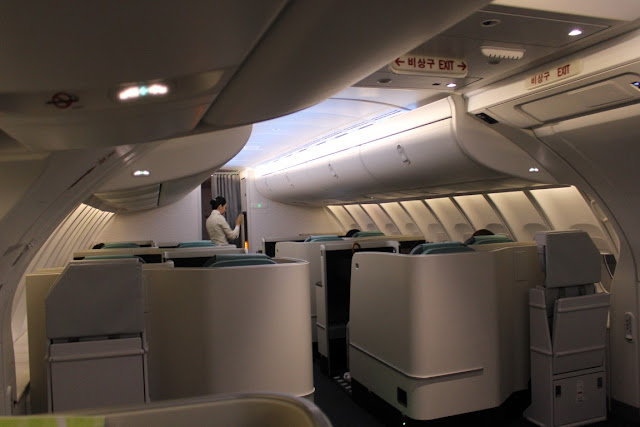 Without moving the seat, my feet couldn't reach the foot rest. Sucks being 5' ! 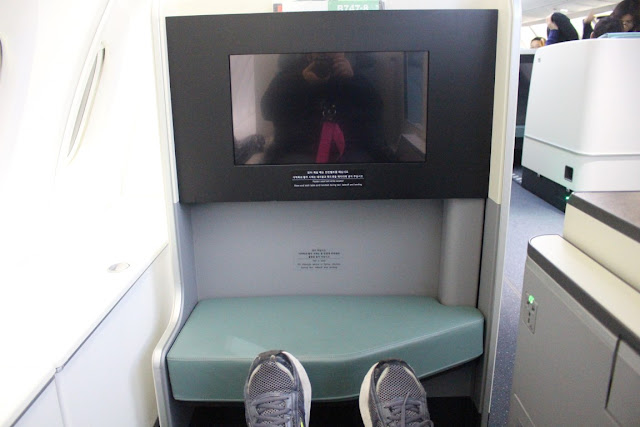 Check out the storage compartments! I had two bins all to myself (in addition to the overhead storage) This was great because I had quick access to clothes, toiletries,  cameras, laptops, headphones, etc throughout the flight. 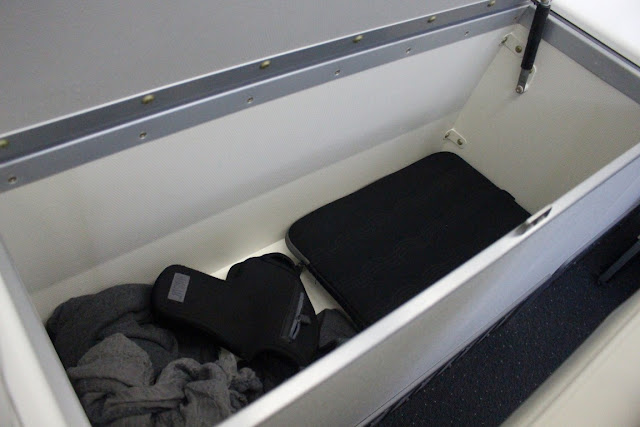 The flight attendants came around with our toiletry kits that included the usual toothbrush, eye masks, comb, creams, lotion and a shoe horn? 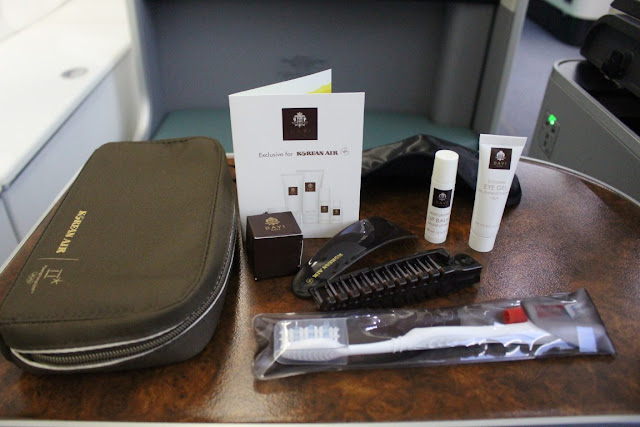 Shortly after we boarded, the door closes and we took off!  There was no awkward moment of sitting in your seat next to a stranger watching a bunch of other passengers walk by and struggle to find room in the overhead bin.

Once we were 25,000 feet up in the air, the flight attendants came by to take our drink orders before delivering our dinner.

I felt fancy with the champagne and wine selection. I imbibed with Perrier Jouet Grand Brut champagne and Bordeaux while the Mo had some scotch. (Johnie Walker Gold) 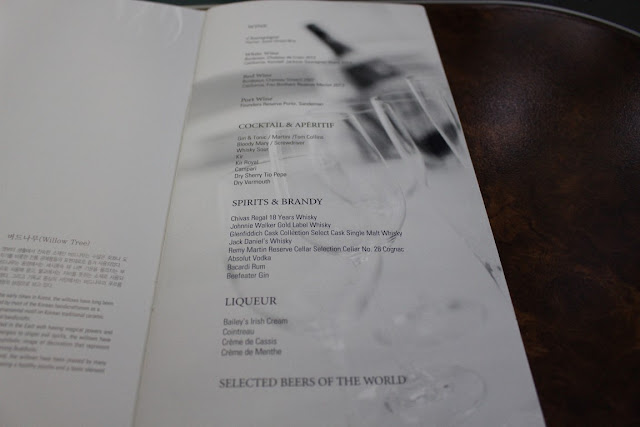 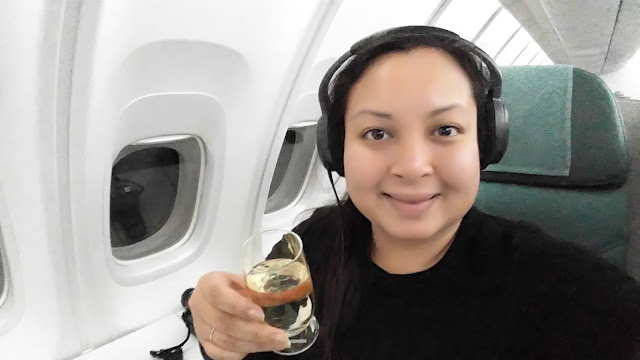 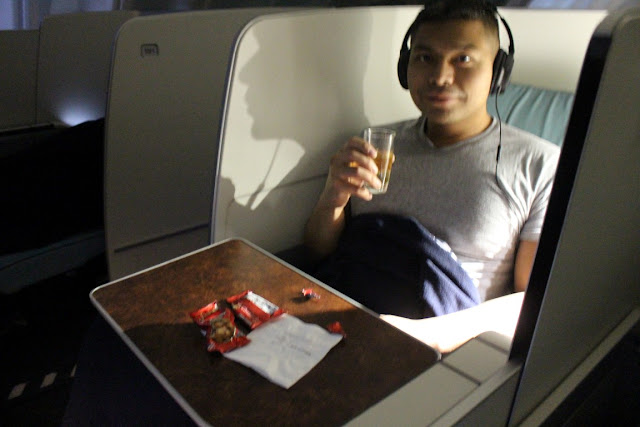 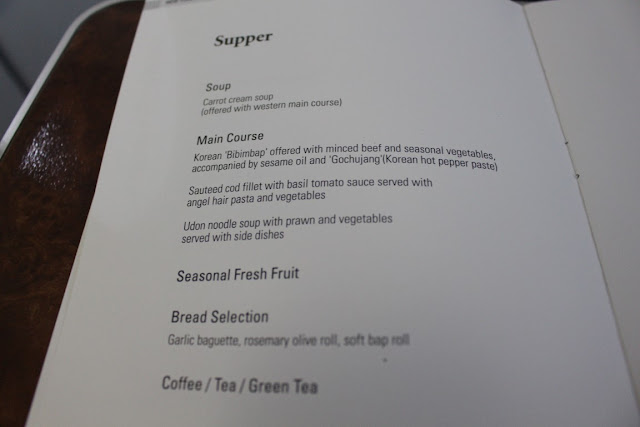 The Mo went with the Korean entree and got bimbimbap.  The condiments were laid out in individual ramekins and the rice was served in its own ceramic pot. 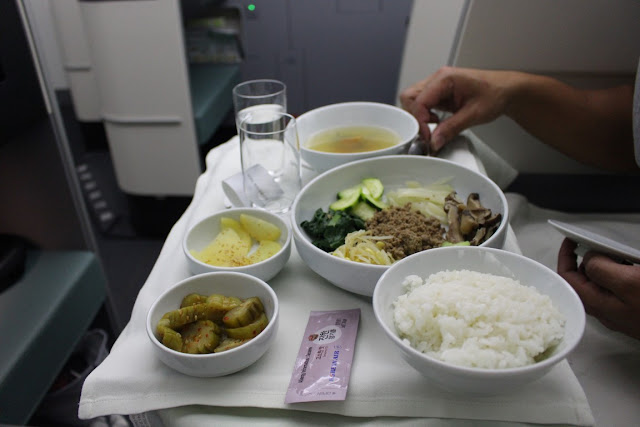 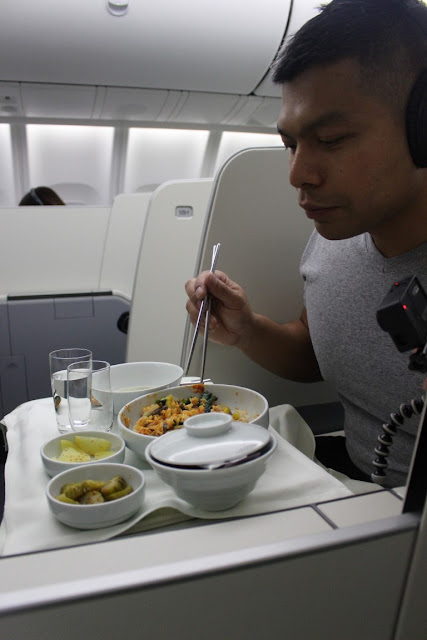 I opted for the "Western" meal and was served carrot cream soup before my cod dish.  The soup was good but the fish was just OK.

Since it was already past 2 AM, Eastern time, I was already exhausted and ready to SLEEP.  The seat lies completely flat so passengers get a restful deep sleep.  (and No, I did not have my seat belt on) 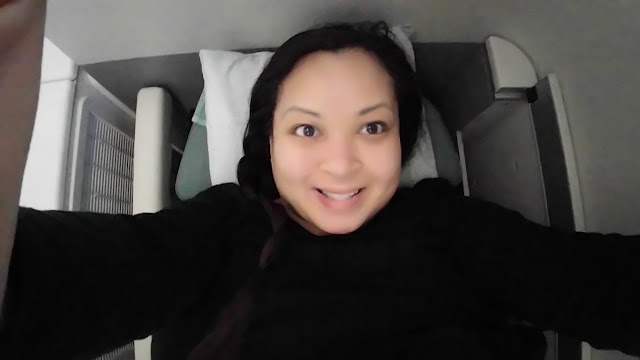 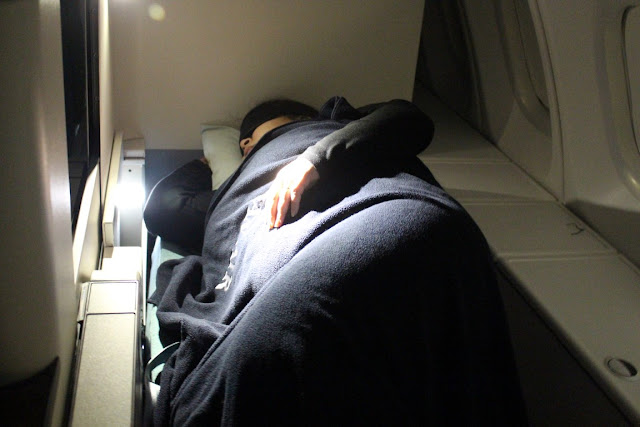 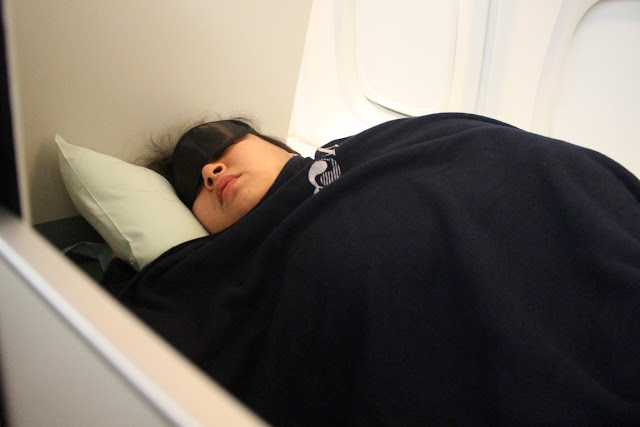 After being knocked out for 7 hours, I forced myself to wake up.  There was a good selection of movies on the in-flight entertainment system which had a 180 degree full flat screen view, controlled via touchscreen on the remote.  The system was easy to use and didn't get "stuck" at all.. (Usually on the economy seats, there are glitches, delays which leads me to pressing buttons too many times which leads me to having to press "back" or "return" too many times.) I watched Room, it was good but it was sad. 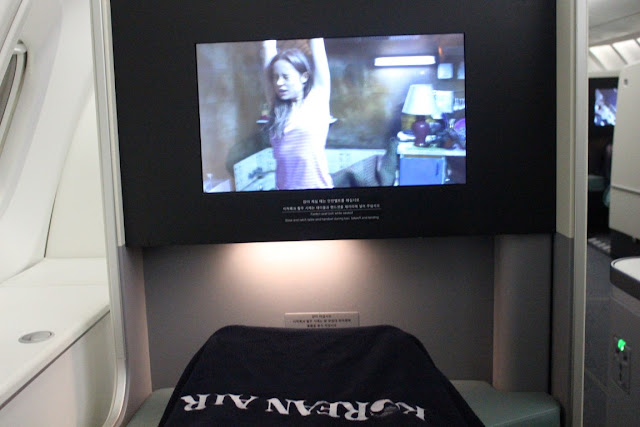 3 hours before landing, the lights turned on in the cabin and breakfasts was being served. 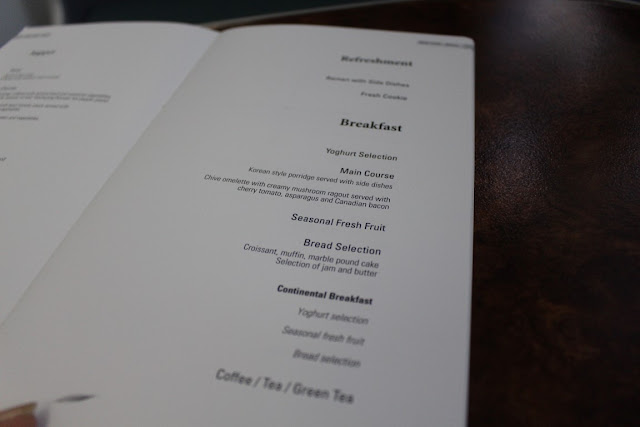 Sticking with our dinner preferences, the Mo had Korean rice congee breakfast and I had the western omelette.  He's been making the better food choices because my eggs were just OK.  They were a bit rubberish and I would have expected that meal for an economy dish.


After all meals, sliced fruit is served. 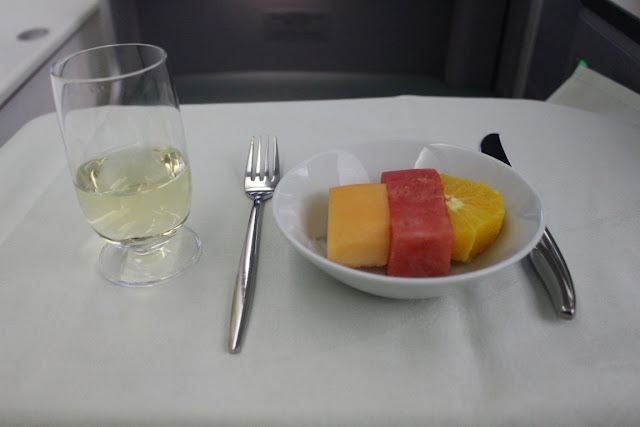 Overall, the flight was a great experience and I would definitely do it again if we were using miles.  I couldn't shell out the cost to pay true ticket prices when I can ride in economy and get to the same destination.