I've been asked many times recently why I haven't blogged so this post is long overdue!

I had the opportunity to visit Chicago for a work trip and my boss was kind enough to let my friend Jenn and I extend the trip for the weekend.  It was a fun filled weekend that included booze, food, music and site seeing.  Unfortunately we couldn't stay in downtown because there was a massive Star Trek convention, Cross Fit Games and huge medical convention all during the same weekend.

Our first night, we hit up an Italian restaurant/lounge called Club Lucky with the other agents from Washington D.C. The food was delicious! We shared two types of salad, one including a bean salad, fried calamari served in a lemon and garlic sauce, meatballs and sausages.  The freshly baked bread had the perfect hard crust with a soft warm middle section. 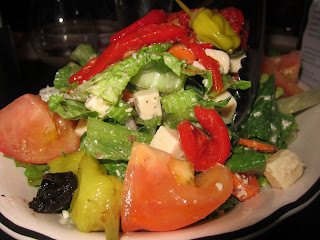 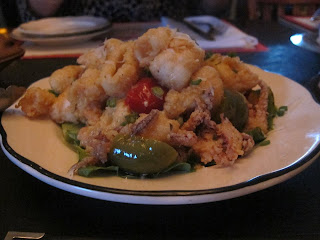 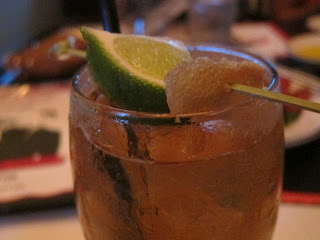 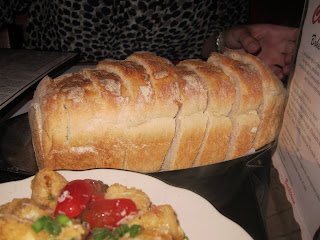 We were stuffed by the time the server came to take our entree order.  I ended up getting a bolognese with a ricotta topping. I shared my meal with the table and everyone agreed it was the best bolognese ever! 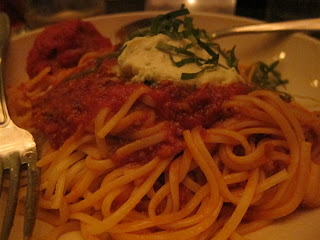 After too many drinks and food, we took the drunk bus over to Kingston Mines, a Blues club. I had never been to a blues club so I didn't know what to expect. After a couple round of drinks, we were herded from one room to another.

The rooms switch after each set of performance. I thought it was a cool concept because we didn't have seats at first but if we were quick enough, we were able to get a table between the changes. 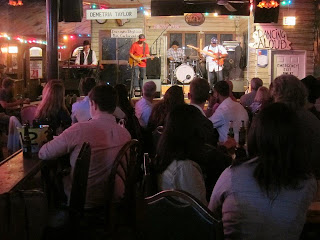 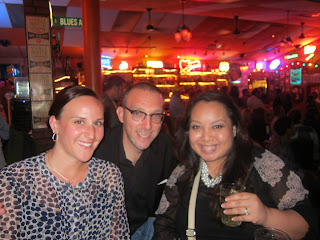 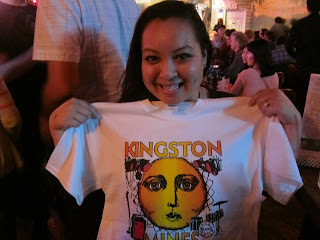 So i got a little tipsy and the lush in me went up for the "Booty Shaking" contest. Of course I was the only non African girl in the competition. The crowd was very nice to me.

It was a late night and we headed back to our hotel in Rosemont to sleep for a couple of hours before our full day of training at the factory.  For lunch, they served Chicago's deep dish pizza. I didn't get a change to take pictures but I wasn't blown away. I thought it was "too big" and I had to use utensils to eat the pizza.

After training, most of our peers headed back to their hometown.  Jenn and I went bar hopping some more and discovered Toby's Keith I love this Bar and Grill.  We stayed out all night and had so much fun drinking and meeting the most interesting characters.

The dance floor was packed with lots of bachelorette parties and girls with short skirts and cowboy boots. We kinda wished we were more prepared! There was a live brand singing popular country songs that I only knew one Taylor Swift song and that one Pontoon song.

All I remember is that I was so hungry from skipping dinner and we had nothing to eat at the end of the night. There were no vending machines or any place close by to grab food at 2:00 AM.  I went to bed drunk with my stomach growling. 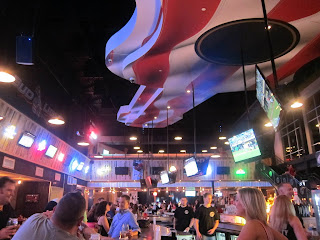 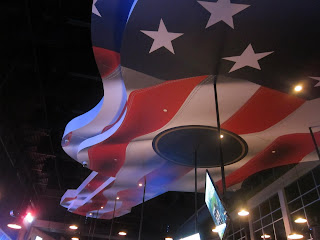 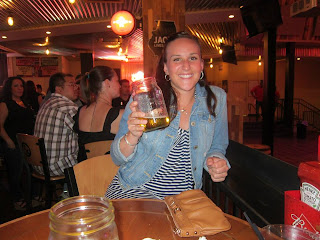 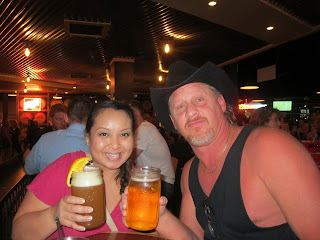 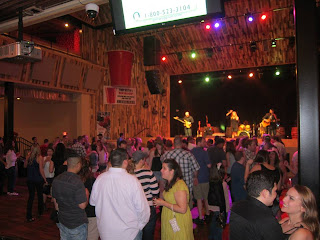 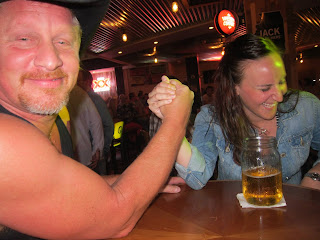 We have previously booked the Architectural River Cruise tour through Shorline Cruises so we had to get up for that. We jumped on the train towards downtown.  We got the 3 days pass for a deep discount from Groupon   I am so glad we made it because the views and photo opps were amazing!  The boat wasn't crowded so we were able to run around and take as much pictures as we wanted. 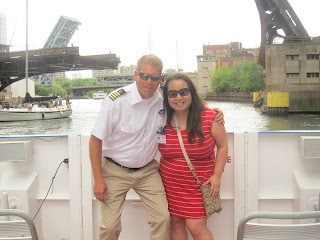 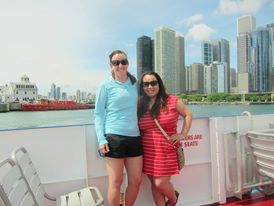 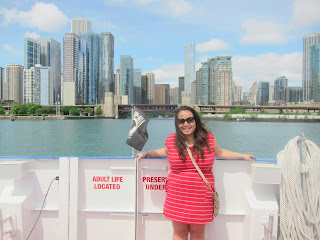 After the tour, we headed over to Michigan Ave and explored downtown.  Of course we visited the famous "Bean" and took lots of pictures among the hundreds of other tourists. 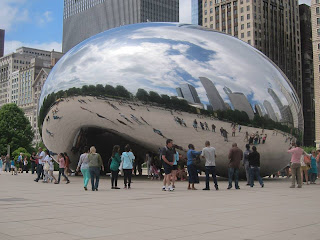 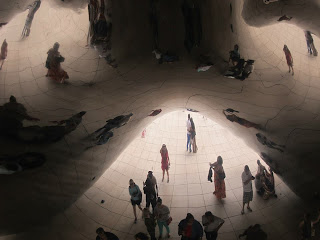 We asked a guide for suggestions to have the best "Chicago Dog" and she sent us on a 20 minute bus ride to the Ukraine village to check out "Phil's Last Stand".  I have to admit, the dog was pretty good with all the fixins'.  I a ma huge fan of ketchup so I was disappointed to hear that people do NOT put ketchup on the Chicago Dog.  The lunch was pretty cheap, setting us back less than $5.00 with fries included. 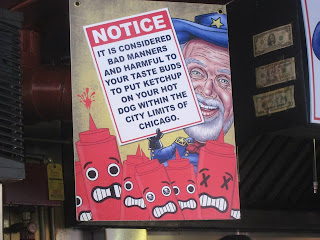 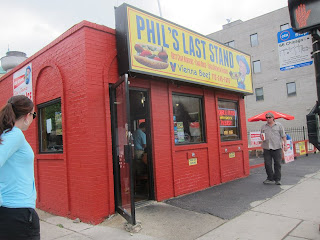 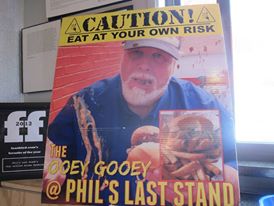 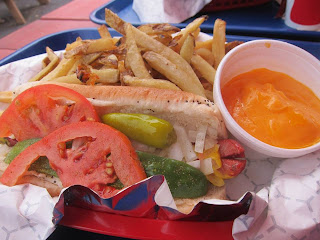 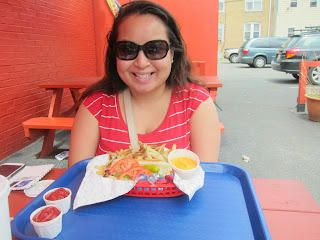 We made the pilgrimage back to our hotel in Rosemont and took a 2 hour nap.  We had made plans to attend a music festival in the city but it poured as soon as we were about to leave our room.  We nixed the idea and started with Happy hour at the hotel where they provide free booze and snacks. 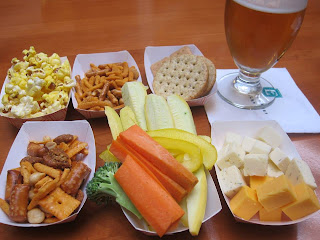 After trying tome local craft beer at the lobby bar, we headed to the Park at Rosemont  which is a block of restaurants, bars, and entertainment center literally 5 minutes from our hotel.  It was so convenient that we ended up there 2 nights in a row! 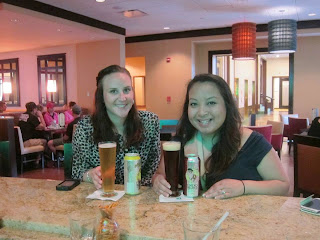 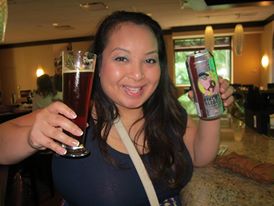 We watched the Bruins game in a Chicago bar (this was before the finals of course!) We met an awesome couple at the bar that was celebrating the husband's birthday so the bartender kept pouring us free shots all night! 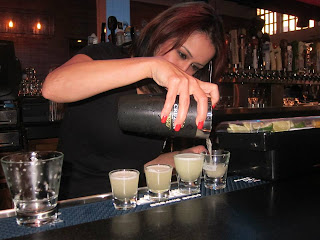 We had plans of bar hopping again but only made it to Park Tavern and ended up staying at Toby Keith's again.  This time I was smart enough to order food and eat.  We met a great group of guys and hung out with them for a bit before finally calling it quits. 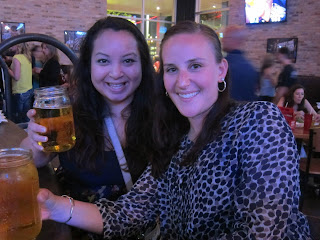 Overall, we had so much fun in Chicago, we refer to it as my bachelorette party with Jenn. I would definitely do it again!