Market's Kitchen is finally open at Market Basket in Chelmsford! 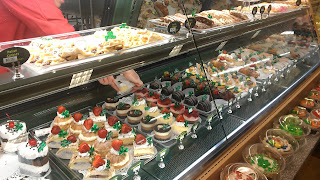 It's no secret that Market Basket in Chelmsford has been undergoing a major face lift since the big competition, Stop & Shop opened across the street where the old cinema used to be over a decade ago.  Stop & Shop, the largest New England food retailer finally won the battle after many years of numerous blockages and had its grand opening just in time before a major holiday season, Thanksgiving of 2011.

Today, Market Basket opened up its Market's Kitchen in the Chelsmford store.  Many of you may already be familiar with it since its already featured in the Tewksbury.  Market's Kitchen is comparable to the hot foods sections of many other competitors such as Stop and Shop and Wholefoods Market (on the luxury end).

Customers can browse and pick and choose different things to make up their meal.  The choices are endless at the new Market's Kitchen in Chelmsford.  There is a made to order deli station, pizza station, sushi station in additional to the fresh hot fried foods like egg rolls, chicken wings and onion rings.  The beauty is that the set up is very convenient and affordable.  Unlike placing an order at a sub shop, we don't have to order a "Small Onion Rings" or "Large Chicken Wings", we can just pick and choose how many we want which costs less money in addition to reducing food wastage. 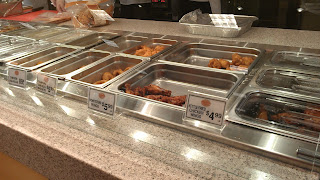 The Mo and I are huge fans since we never really know what we want to eat until we see something that catches our eye.  Sometimes I am in the mood for sushi and he's in the mood for something else.  Usually he ends up getting the made to order grilled Cuban sandwich with extra hots whereas I like to try different things.

The new bakery stood out with their colorful displays of cakes, Italian cookies, pastries, and cupcakes.  The featured cakes were not your typical "grocery store cakes" but more artsy and whimsical.  They looked more modern and definitely caught my eye along with other customers who were already placing cake orders.  The pastries itself were a big ticket item.  I usually don't see the bakery department busy compared to the deli department on a Sunday but today there were people asking for rum log rolls and cannoli's. I coudn't resist and picked up a few things myself. A mini cheesecake, espresso cake and a fruit tart only set me back $6.97. 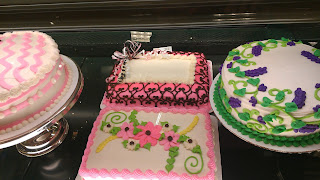 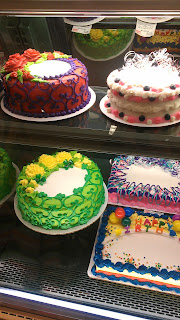 Although there is no salad bar, there's a decent variety of premade salads in the refrigerator section where you can also pick up premade side dishes that can be reheated at home.  Across the refrigerator is the hot rotisserie chicken with small and large chicken and premade subs.