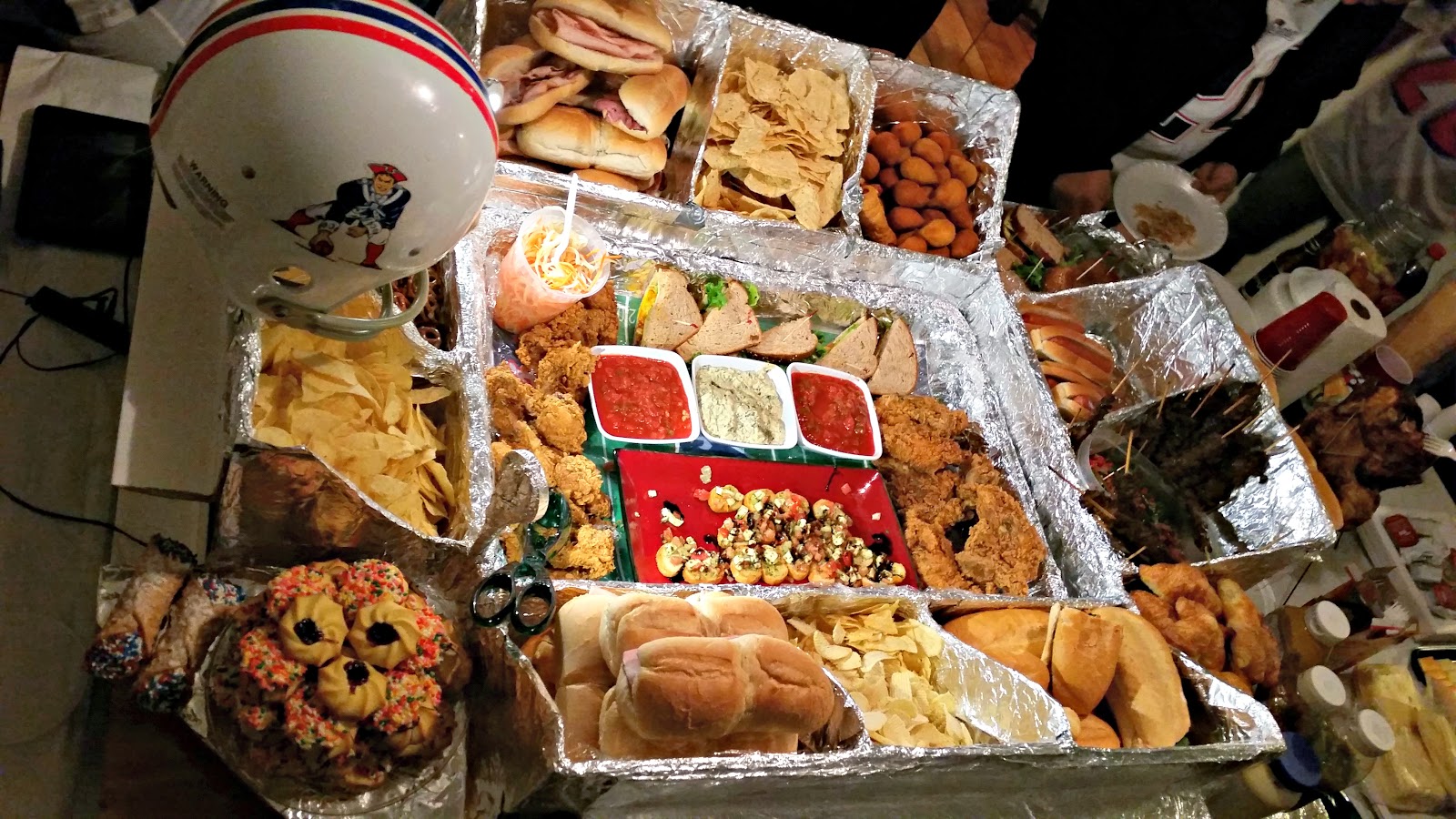 Let's face it, a Superbowl party is pretty much a "One Day Pass" to indulge in cheesy dips, fried goodness, decadent sweets, pretty much, all the bar food staples.  Of course I got the emails from Weight Watchers, my local gym and all the other health conscious websites in the like on how to "prepare" for Superbowl parties.  Their messages were all similar, eat a small meal ahead of time, fill up on veggies and drink lots of water.  Yeah.. OK, I've been doing that since January 1st.....  (not to mention, I haven't had a sip of booze since grandma's birthday

Since the Patriots won the AFC championship and earned a spot in Superbowl XLIX, it seemed like everyone was hosting a Superbowl party. For the record, I actually had to Google how to type "49" in Roman Numeral

At work, the Omnilite crew kicked off the weekend with a Friday "Pre" Tail gating party.  We all wore our fan gear and feasted on ribs and sliders from Chili's, wings and chicken terriyaki from Burlington Jade Chinese takeout, my favorite buffalo wings and potato skins from Newtowe Grille in Billerica along with other game day specials that included cheese, crackers, guac, fruit and pasta.  For dessert we had cake to celebrate Jenn's birthday along with Pat's themed cupcakes and chocolate covered strawberries made to look like cute little FOOTBALLS!  I was stuffed.

What can I say? My company is pretty awesome. 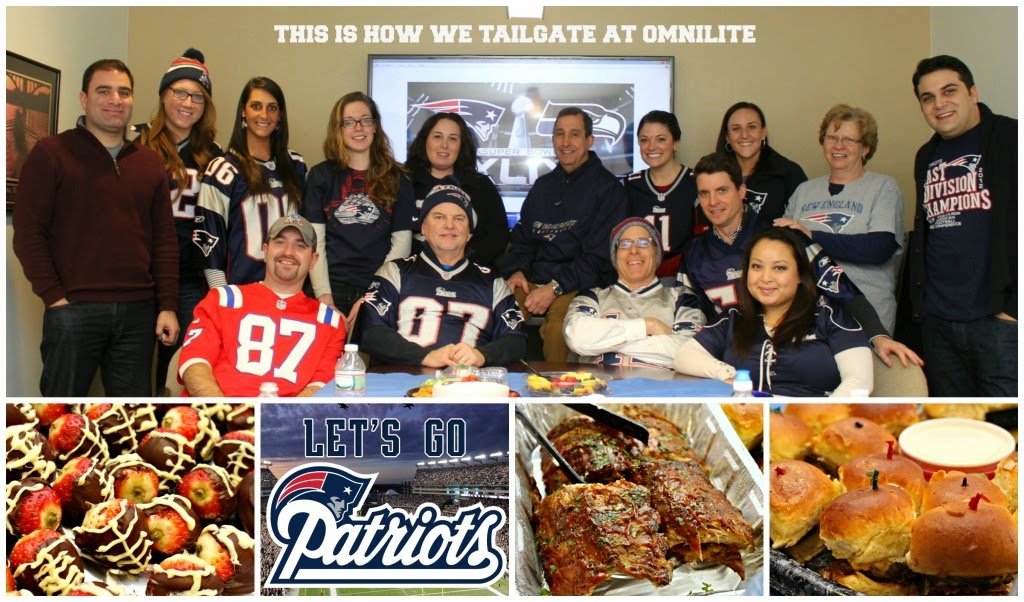 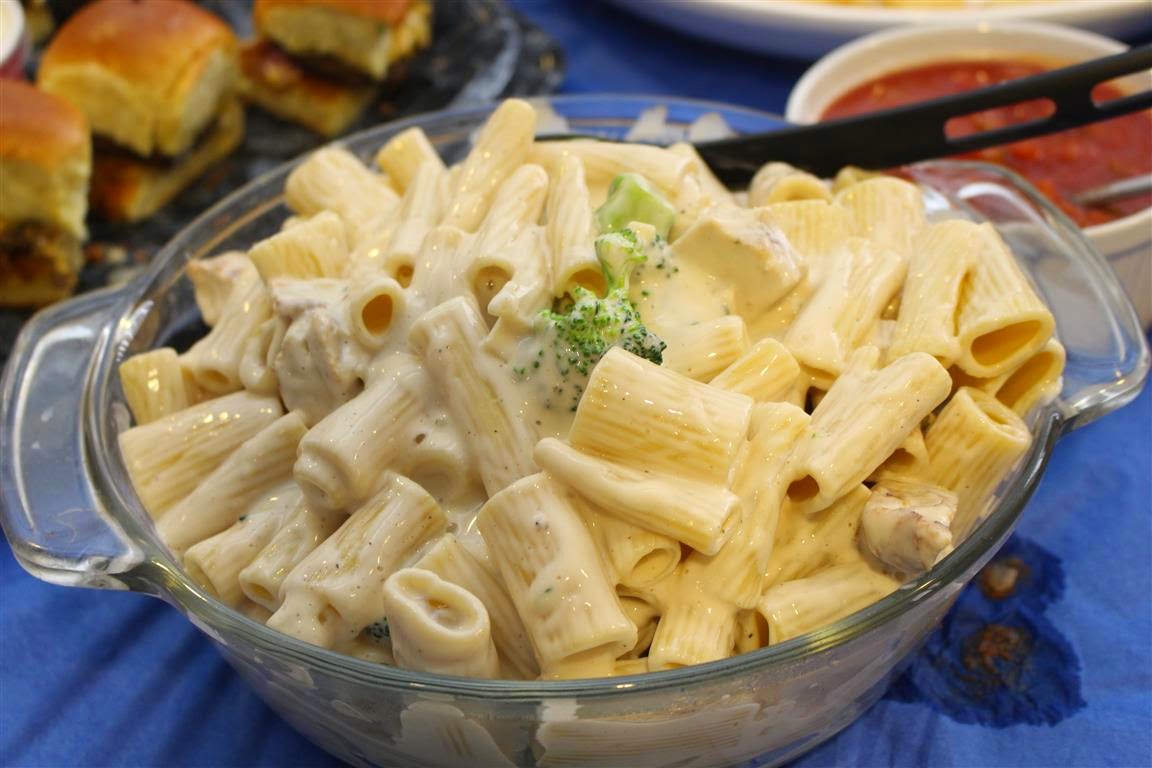 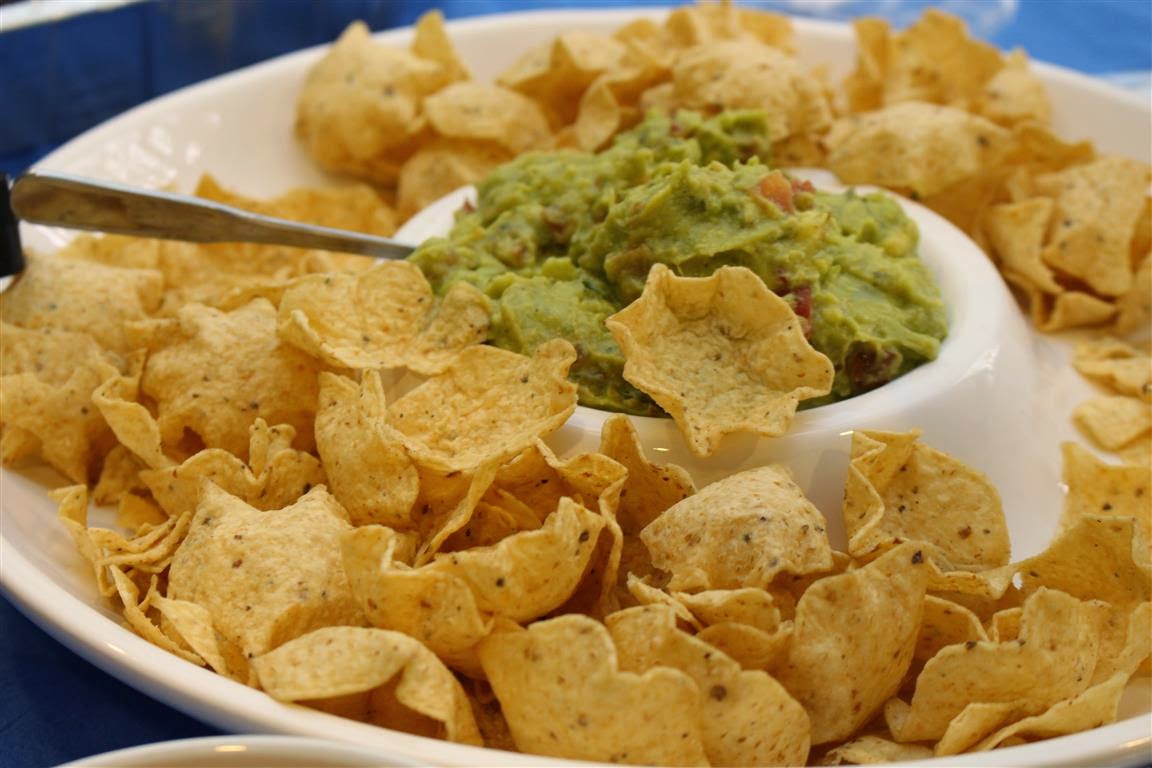 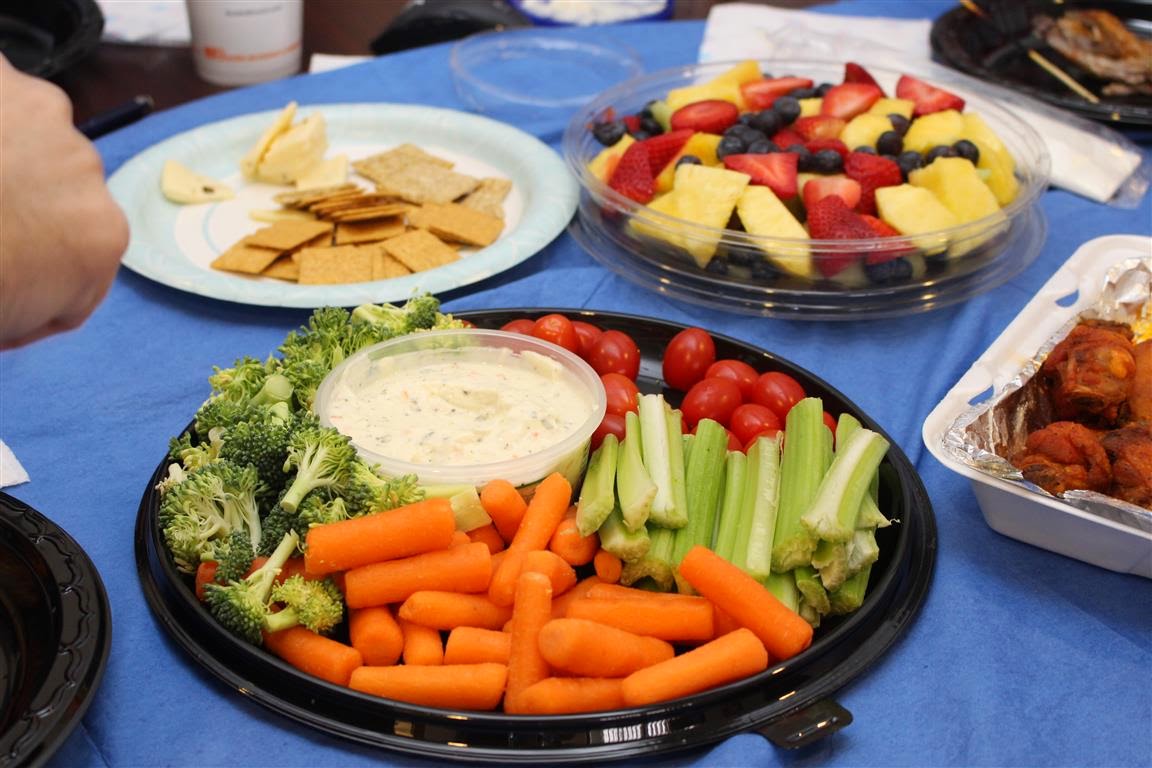 For the actual game, we had a few parties to go to. We decided to stay local due to the impending storm and parking situation (or lack of)

We headed to the Mo's parents house for our first stop around 3:00 PM and grazed on Cambodian food.  His parents made delicious pan fried head on shrimp, stir fried Chinese mustard and Cambodian shrimp salad.  It was delicious but I didn't want to ruin my appetite just yet.  After all, it was still early.  Being the typical Asian mom, she sent us home with containers full of food that we enjoyed the next day so we wouldn't miss out.

In addition to the Cambodian food, the fam cooked bbq wings, ribs, pasta and sloppy Joe's. 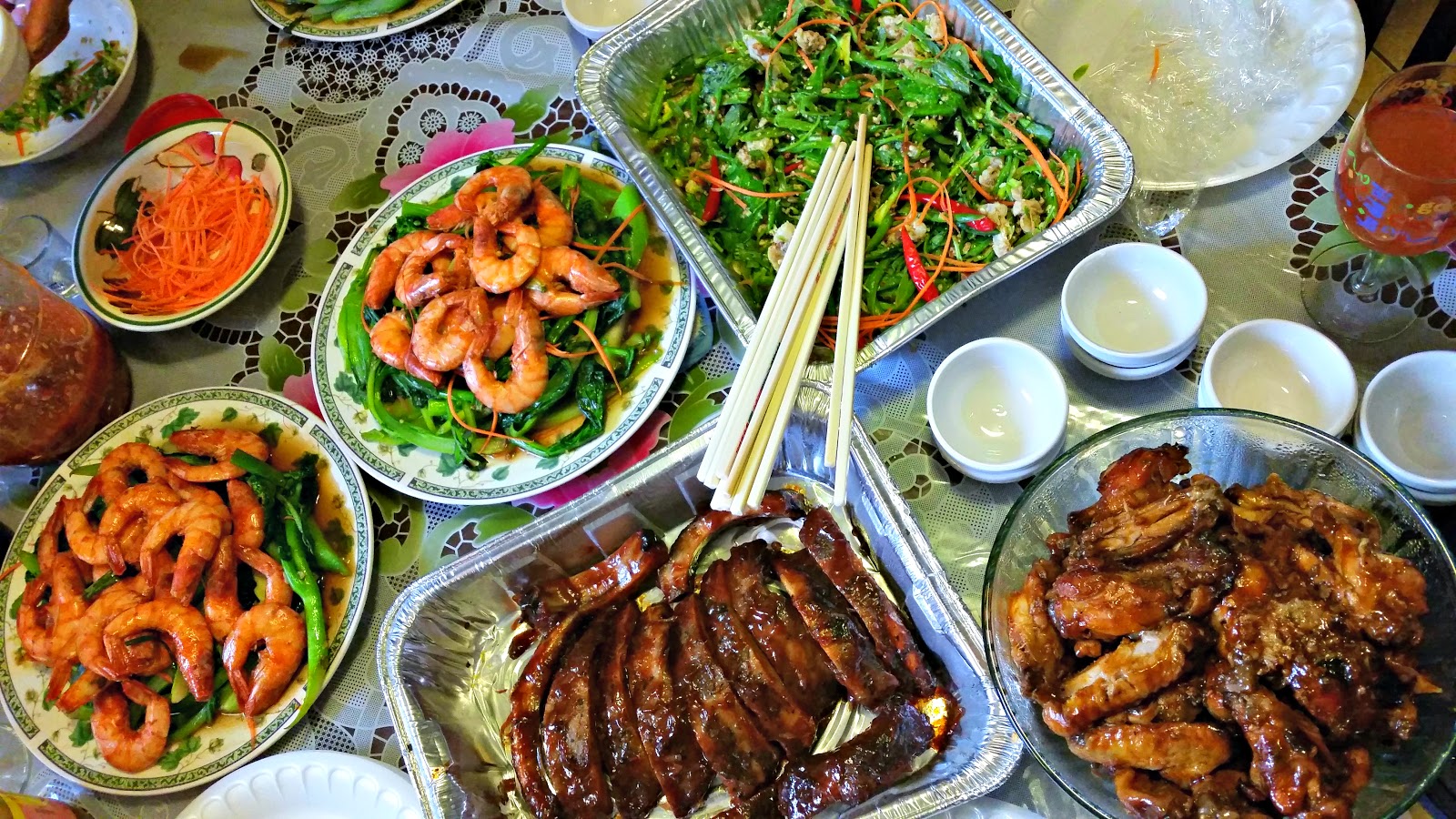 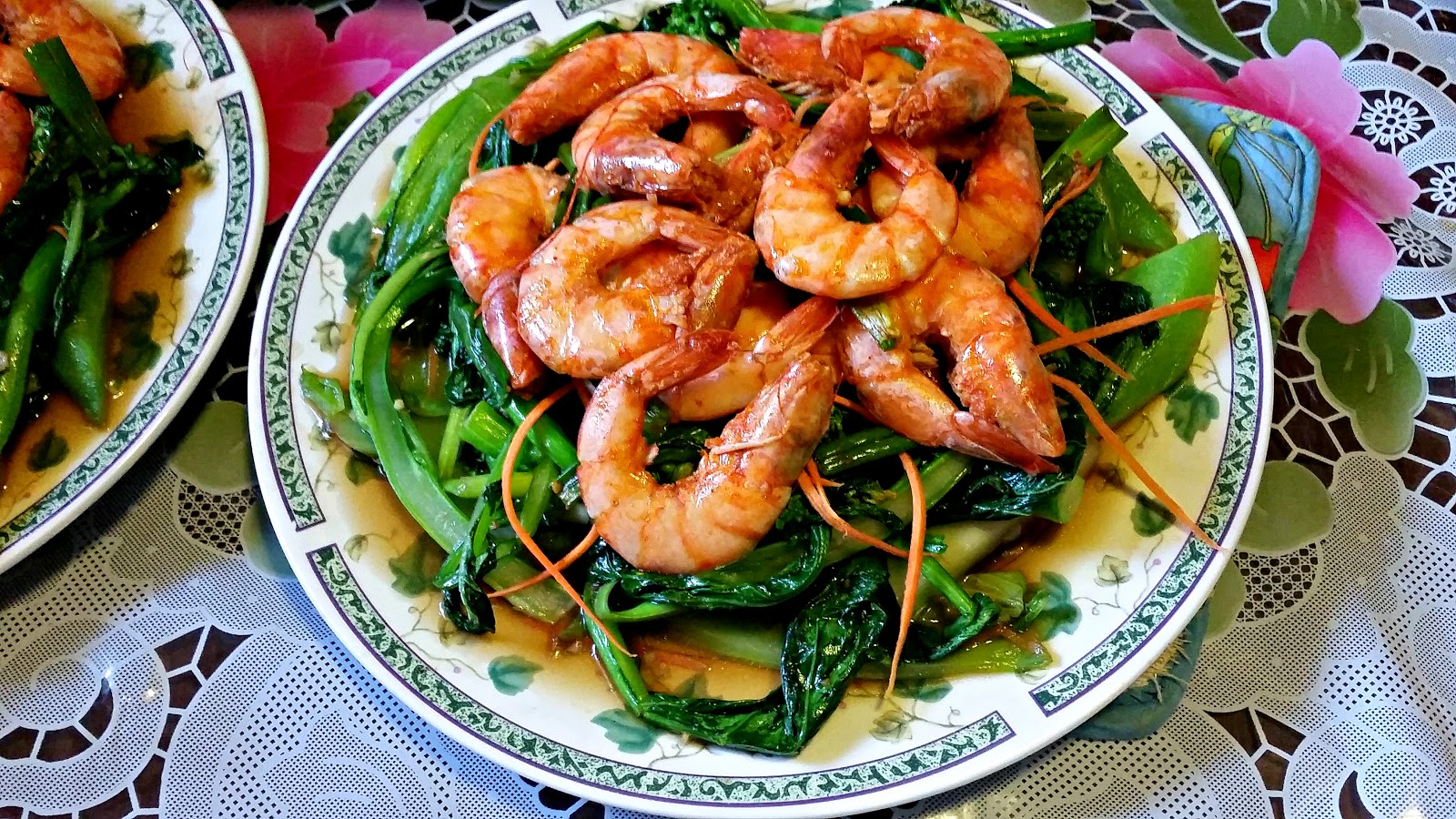 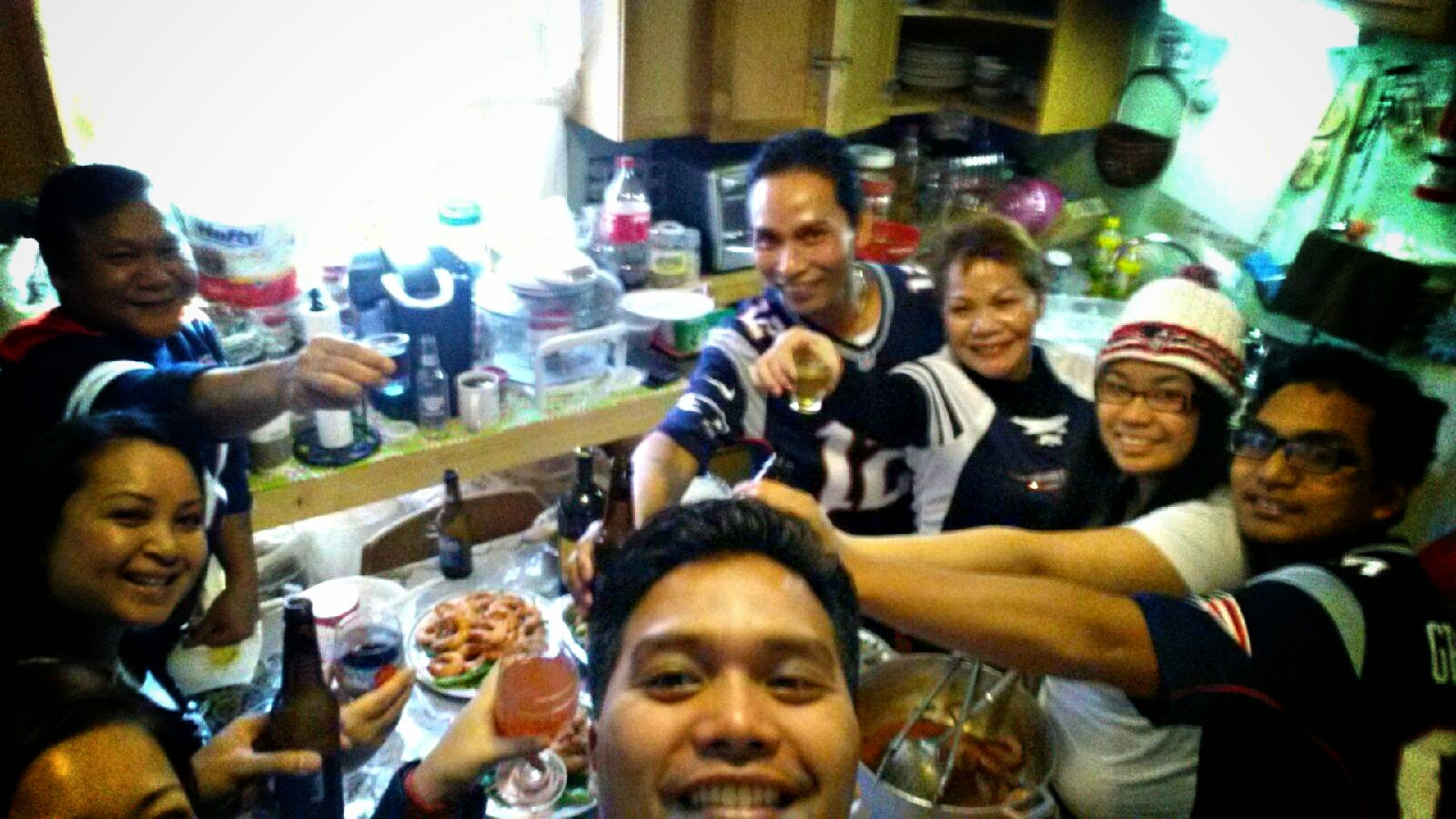 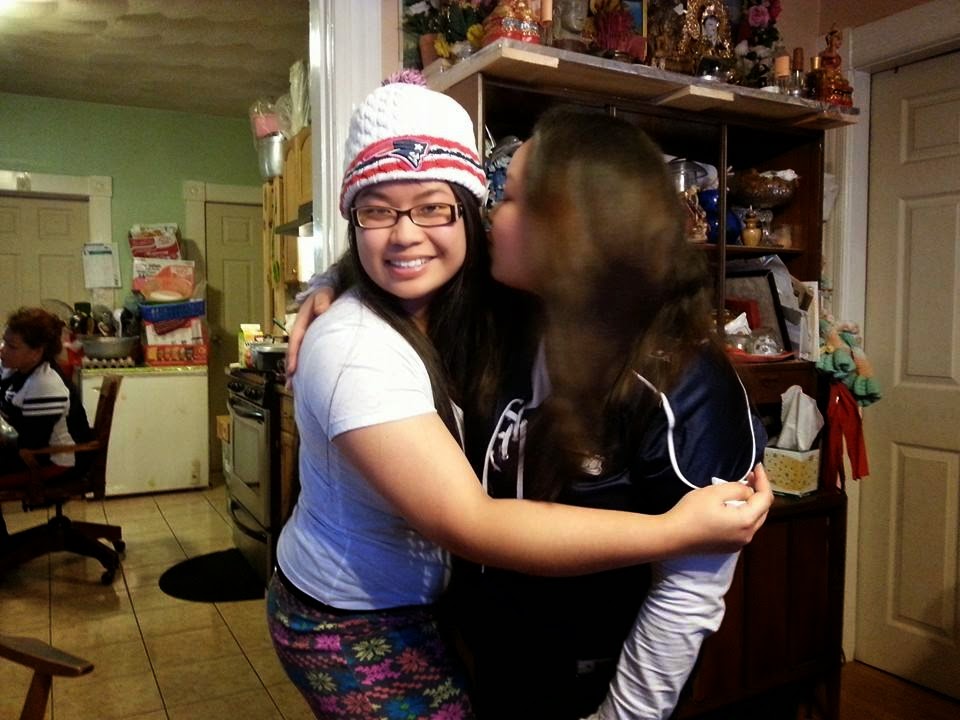 Next up, we went to Syn's house (our best man from our wedding). We tried to get their early since parking was limited.  The Mo has been going over to help them build a food stadium for the Super Bowl Party. There were Vietnamese banh mi sandwiches, Phad thai and beef sticks from my favorite restaurant (Heng Lay), hot dogs, KFC fried chicken , assorted deli sandwiches, pigs in a blankets... ahh.. I can't name them all!  It was all great! I was in love with the homemade dessert squares that Sidi brought. 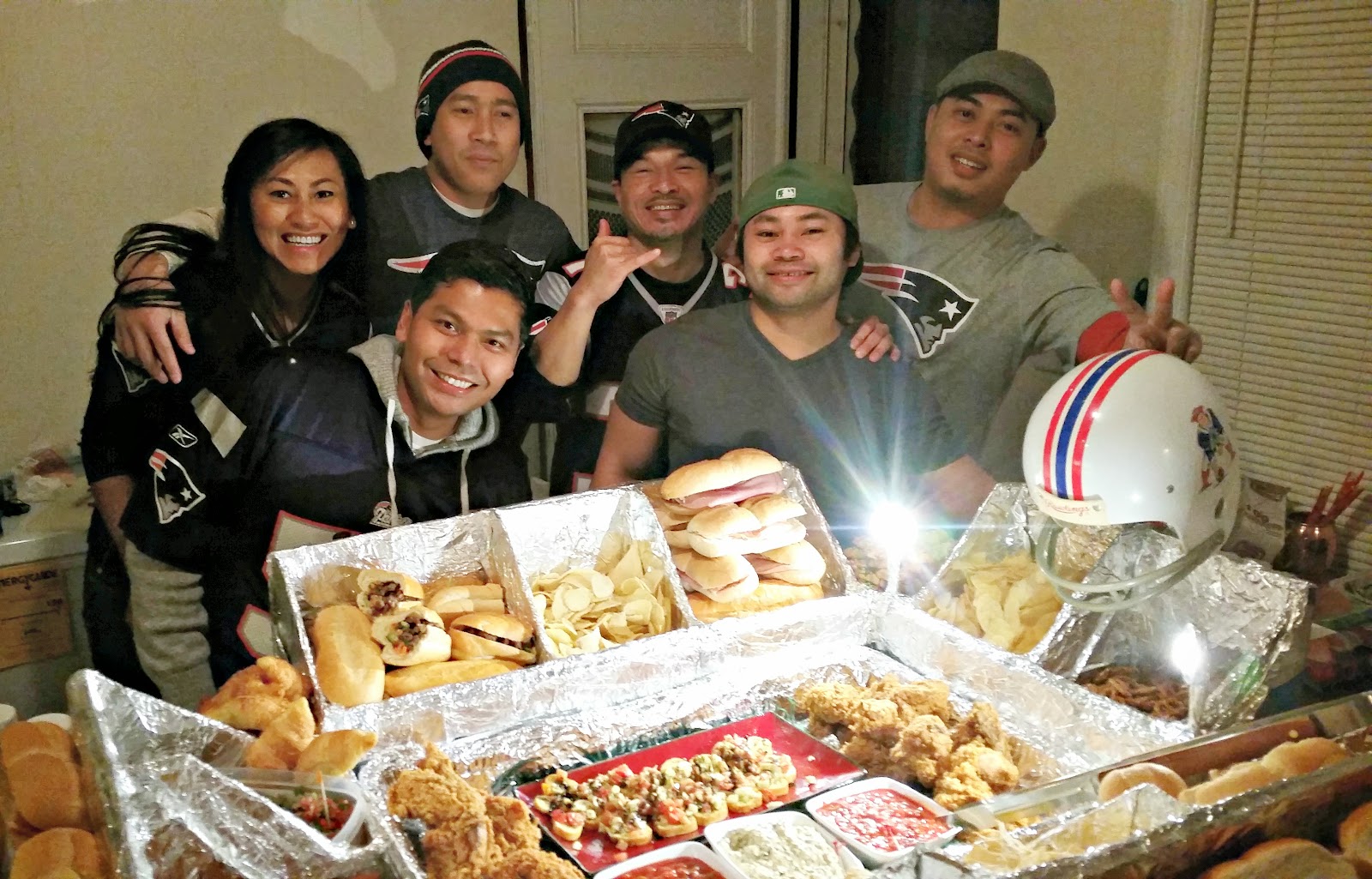 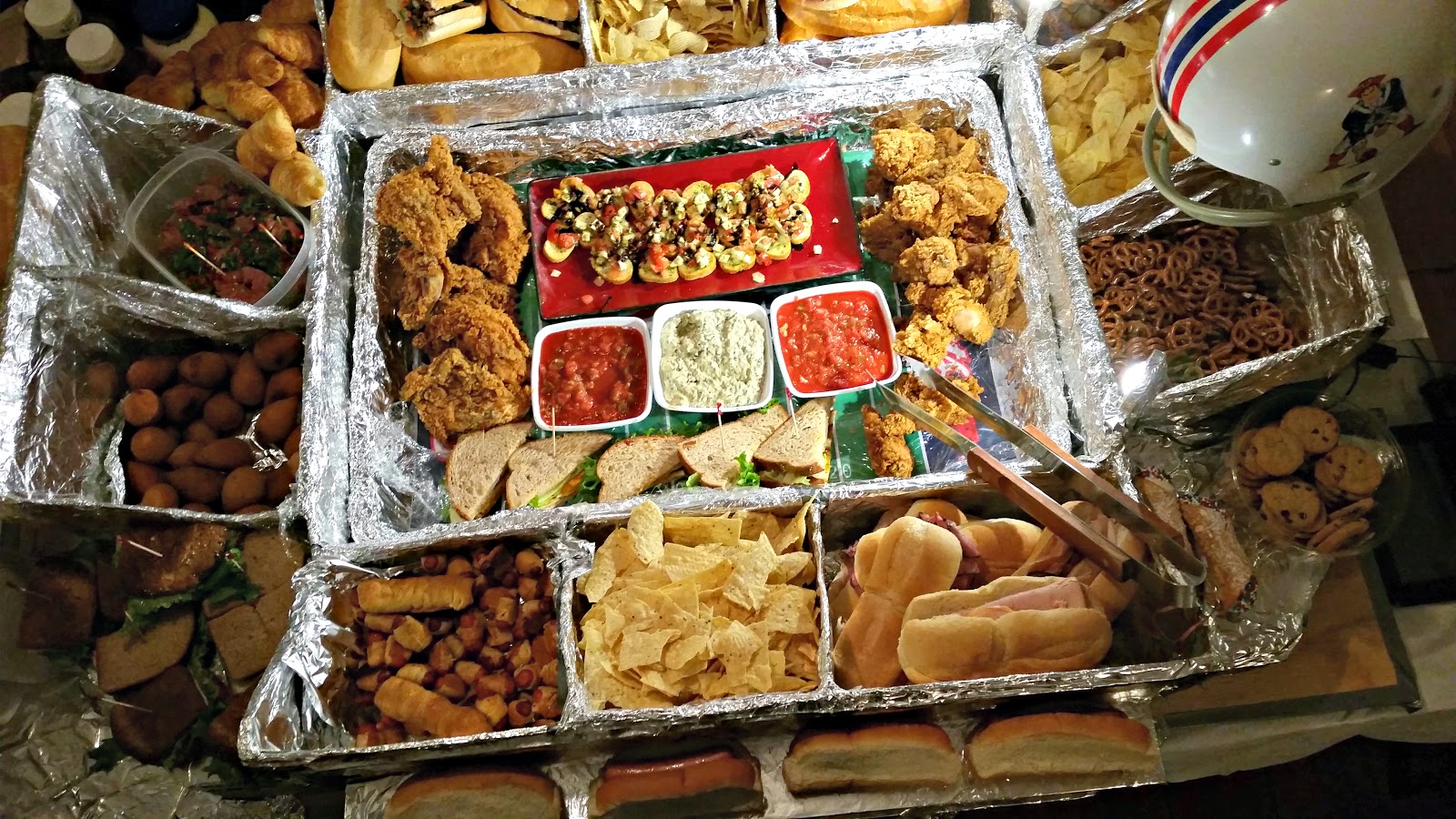 I loved seeing these cute kids dress up in their fan gear. Too adorable! Our last stop was Dracut at the Sar's house. They also had the game on a large projected screen. It was so cool.  Of course, there was more food than people!  I was so excited for Mala's homemade empanadas and Angel's Cambodian chicken salad.  I also love Viet-Thai's chicken wings and fried rice. 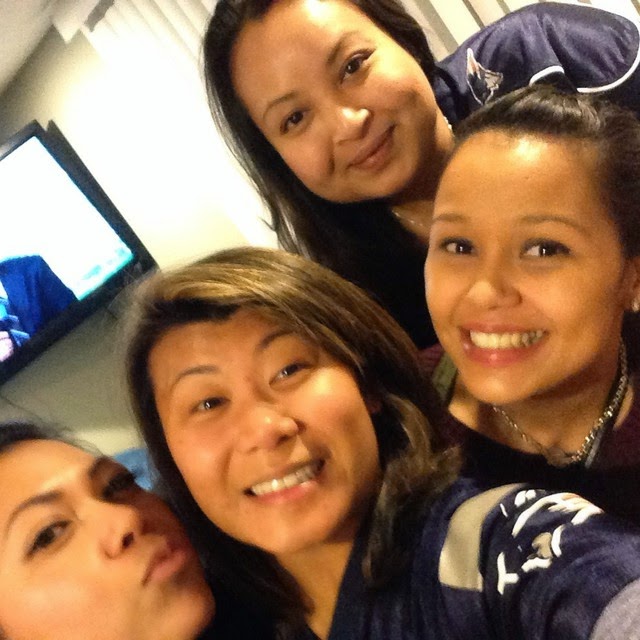 I was thrilled to see that someone brought eggrolls! We had so much fun and it was a great time! Most importantly, the PATS WON! Thanks to all the gracious hosts that extended the invitation for us to join their awesome Superbowl parties! XOXO

Well.. what did I bring??? Considering we were "Party Hopping" , I had to get creative and bring items that would sit well.  I prepared 3 batches of mango lychee white sangria and brought one to each party. 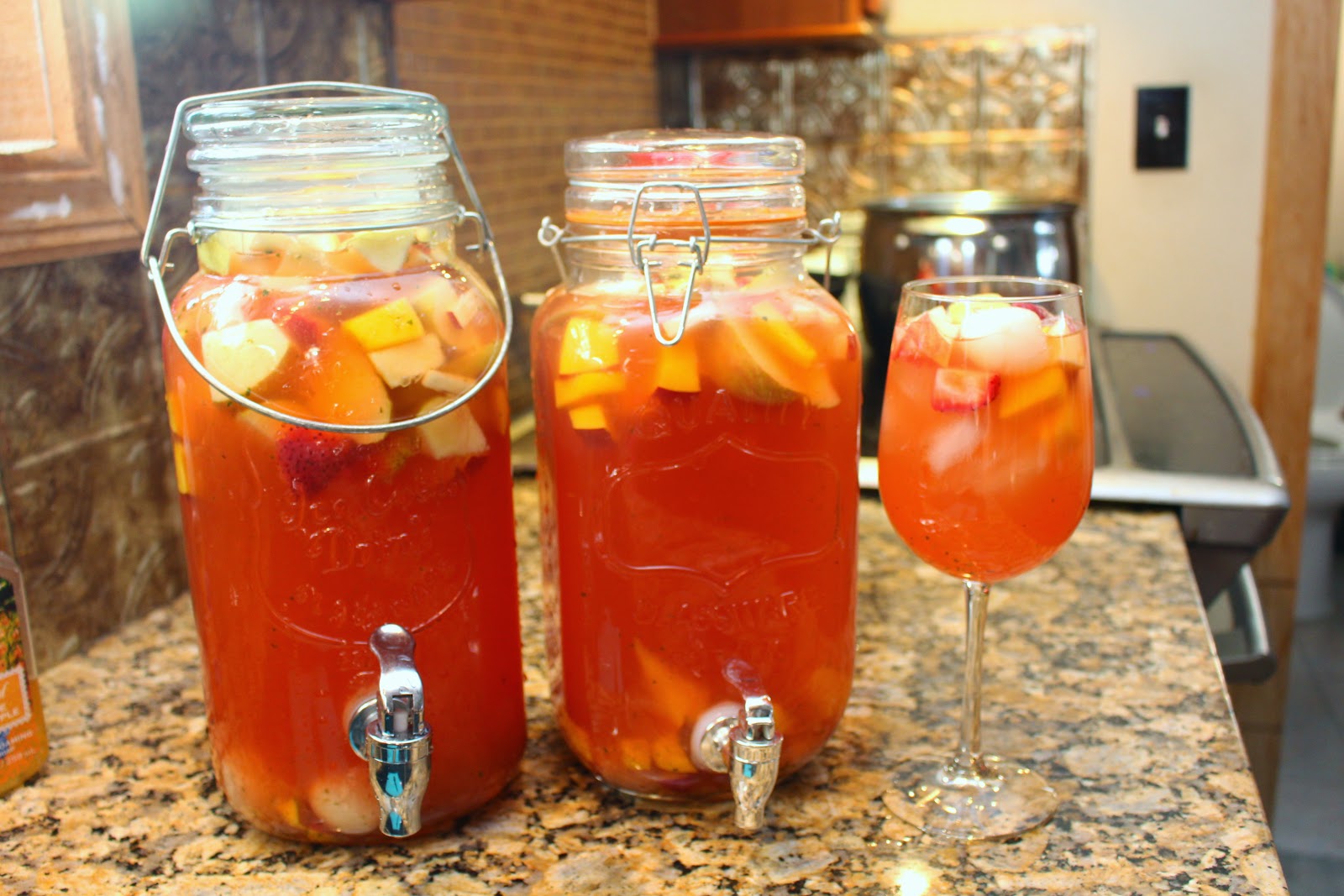 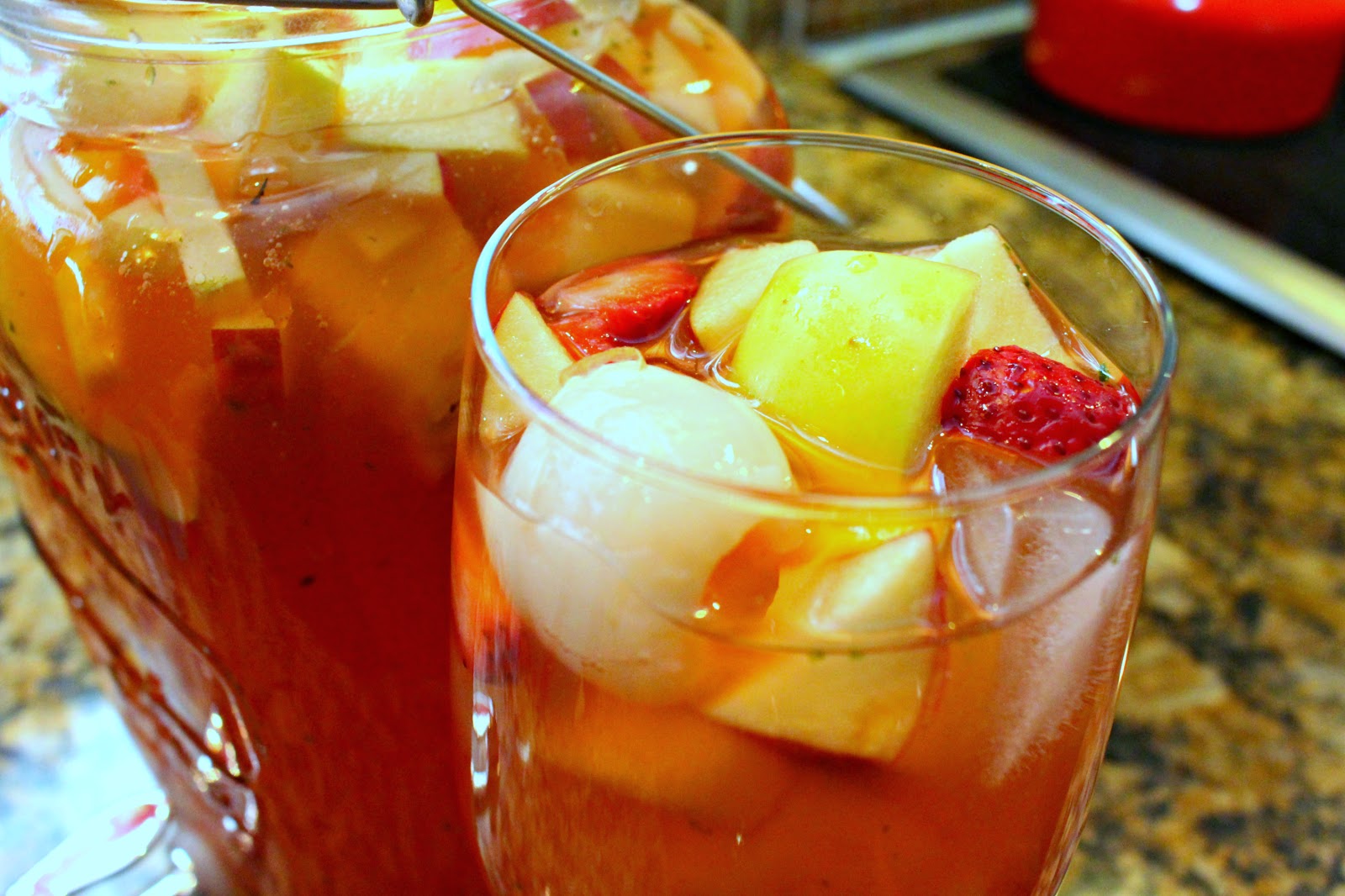 Everyone loves buffalo chicken dip so I used my college roommate, Kelly's recipe and made 3 batches served with Frito's corn chip SCOOPS. 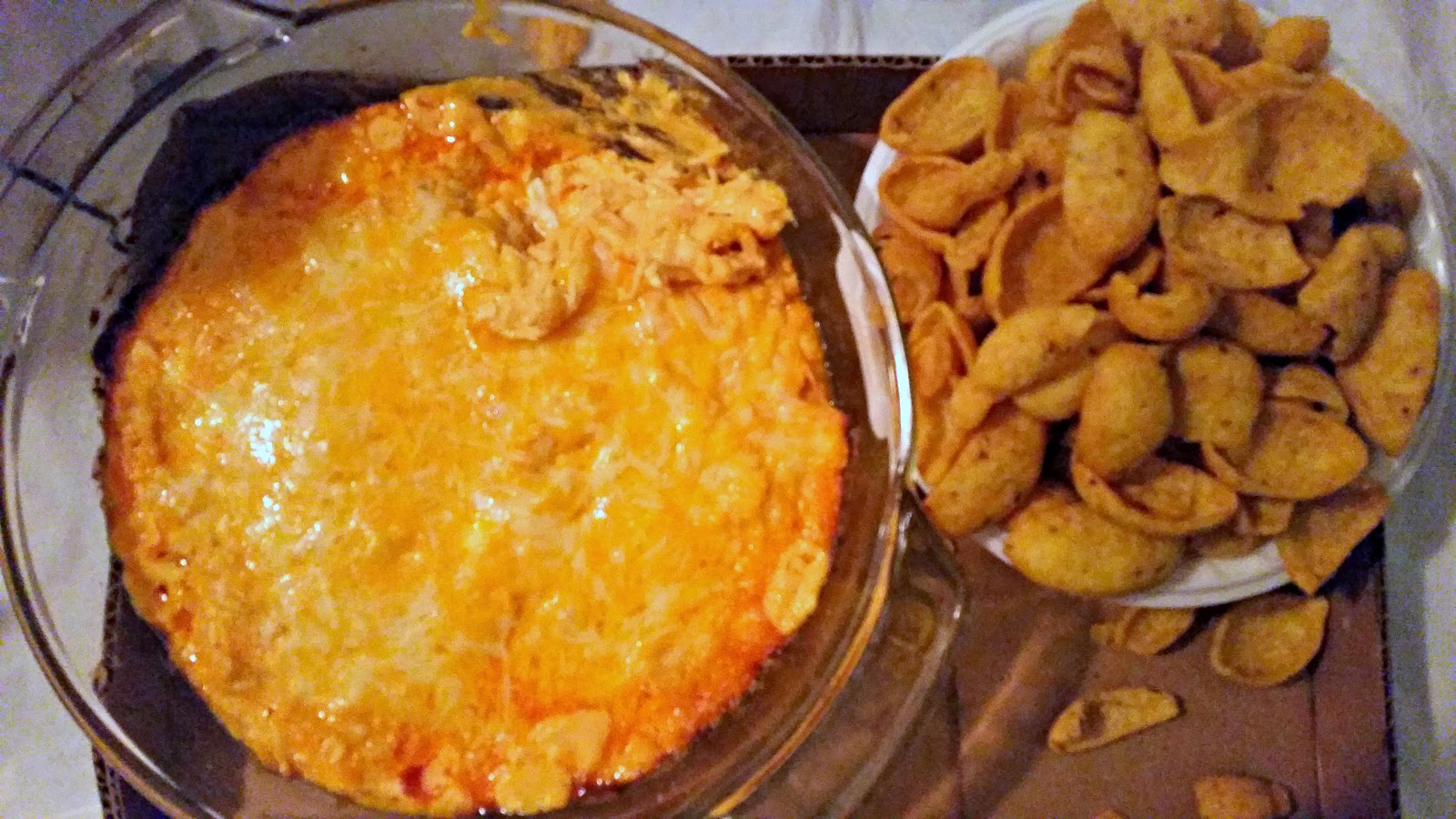 I made a last minute run to Stop and Shop (because Market Basket was a shit show) and saw garlic butter crostinis. Of course they were on sale so I HAD to buy them.  I ended up buying mozzarella, basil, tomatoes and balsamic glaze and made bruschetta.  ** Note, you actually have to make these on site as they don't sit well. I premade the mixture and topped off the crostinis at the each party. 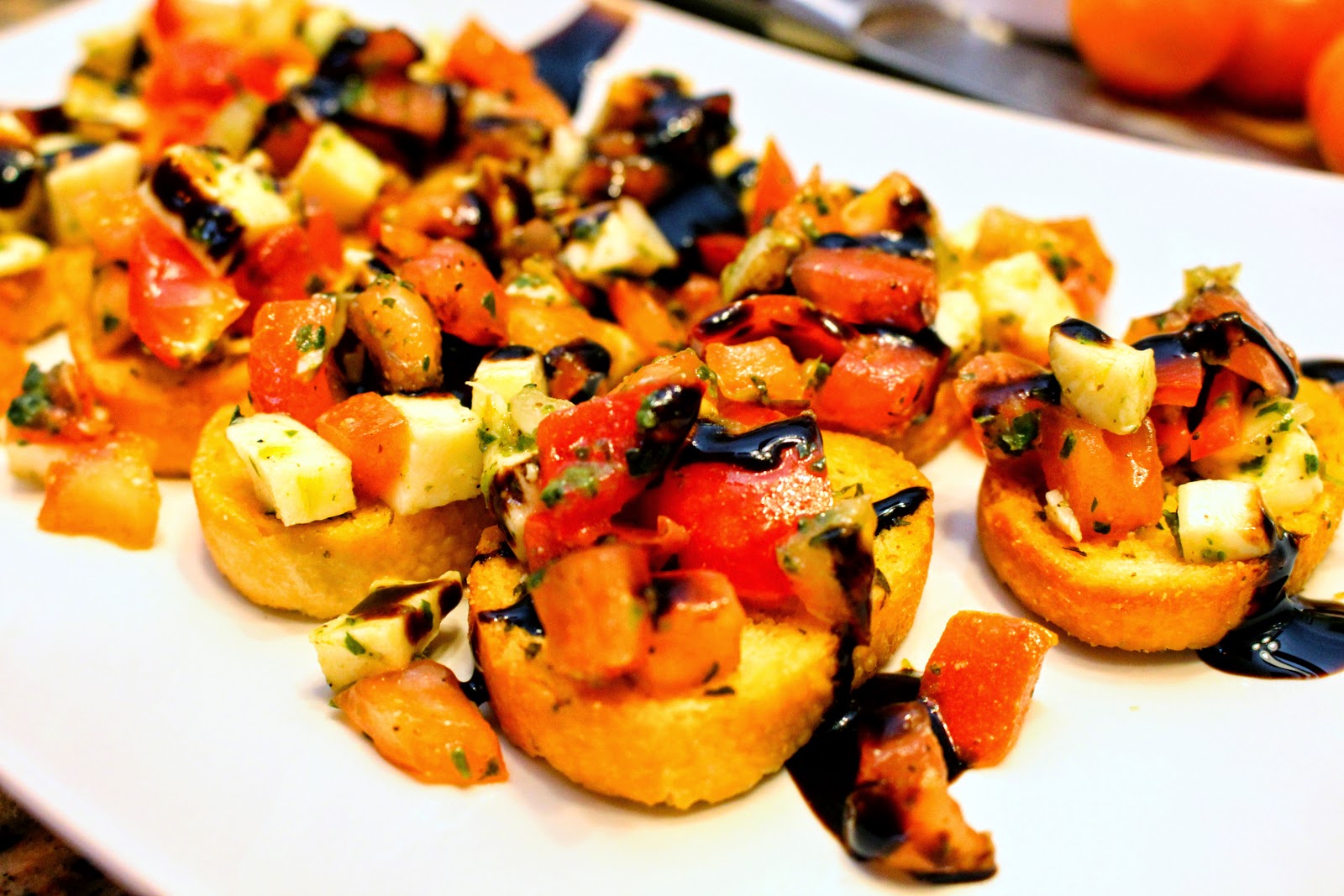 For something sweet, I picked up some freshly filled cannolis.  My buddy Dan works in the bakery and he asked if I wanted them fresh and he prepped them while I was there.  He even added the patriotic colored sprinkles for a perfect Pat's theme.   The were really good and affordable.  Each cannoli was $1.99 or 4 for $6.99. 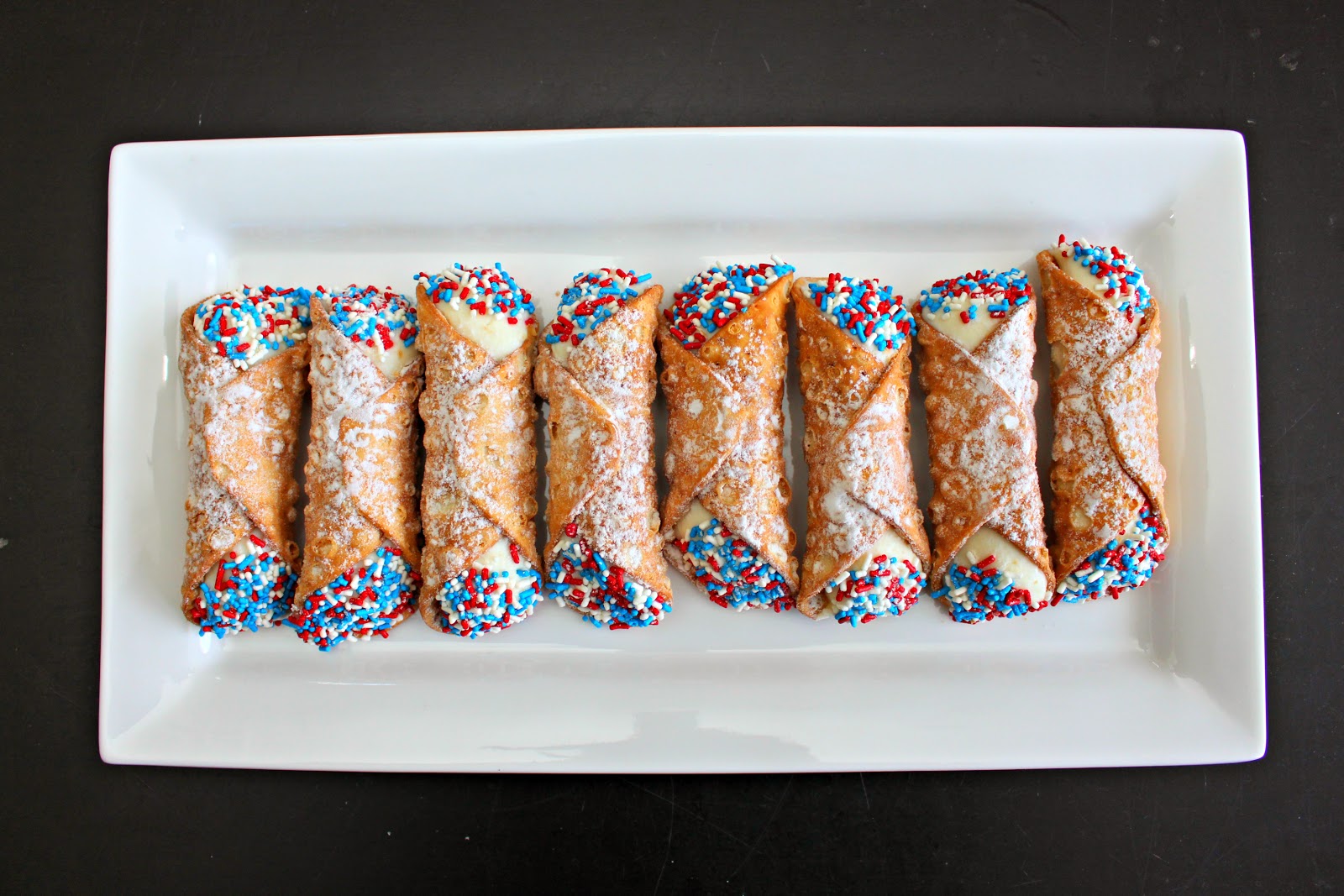