Passport Save the Date's for a travel theme wedding

I have to admit, I'm a little disappointed in myself that I dropped the ball on our "Save the Dates."  The standard timeline is 6 months before the wedding but we didn't get to send them out until last week which puts us a little under 5 months.  We kept putting the photographer off for a "snowy" scene and one weekend, it even snowed TOO much. After the pictures were taken, there was a lead time for proofs then editing so we just decided to use one of our own pictures from a hiking trip last summer.

The original plan was to have an engagement shoots with these customized mugs ordered from Vistaprint  with a collage on a save the date postcard.  That never happened, but the coffee mugs are definitely great keepsakes.  I love the red lips and the mustache.  Sometimes when the mustache mug is in the dishwasher, the Mo uses the red lips one and its quite amusing.
We actually had a handful of magnets made a couple of months ago but there weren't enough so we had to supplement them.  The Mo and I kept going back and forth between doing something funny or nerdy versus serious and romantic. At one point, we even drafted a "Games of Thrones" save the date that read "A Wedding is coming" as a play on words for their "Winter is coming" season theme. 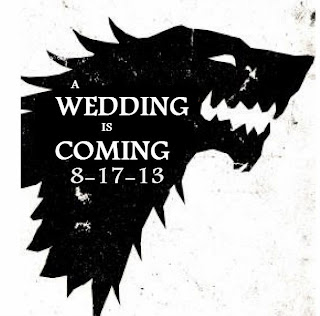 After ordering a few wedding invitations samples from Invitations by Dawn, we fell in love the passport invitation.  I went on their website and saw that it was also available as a "Save the Date" at a fraction of the costs since there were less inserts.  The Save the date didn't require a separate reception card or RSVP card, etc. 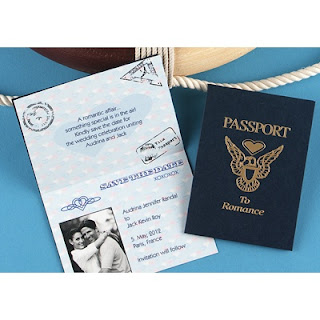 After we confirmed our order, we received the save the dates in less than one week. I was disappointed that I didn't know we would have to assemble the cards. I assumed they all came in once piece and we just had to stuff the envelopes and send them.

The address labels were already a pain in the ass to print out. I had to google search how to add a "0" to the beginning of a zip code then I had to merge the google spreadsheet to Microsoft word.  For some reason only the first page printed and I had to wait another day to print out the last two sheets. I  was paranoid that a million copies of the address labels would print out on the office printer.

I know its more personal to hand write addresses but the mailman can't read my "China men writing." I always did poorly in penmanship in elementary school.

The invitations are actually two pieces that are attached together by glue dots.  Which brings me to another complaint, they only provided one glue dot per each invitation and we needed two for each or else they would look REALLY flimsy.  It took us several days (a couple of hours each day after dinner) to get invitations together and we finally got them out.  Some people got magnets and some people didn't.

It was rewarding to receive nice texts and emails as well as FB posts complementing the Save the Dates.  I mean.. come on.. who would really tell you that your save the dates sucks? I already received some RSVP's and the real invitation hasn't even gone on yet.  Can't wait to do the real invites!

Here are some photos of the save the dates posted on facebook by my friends. 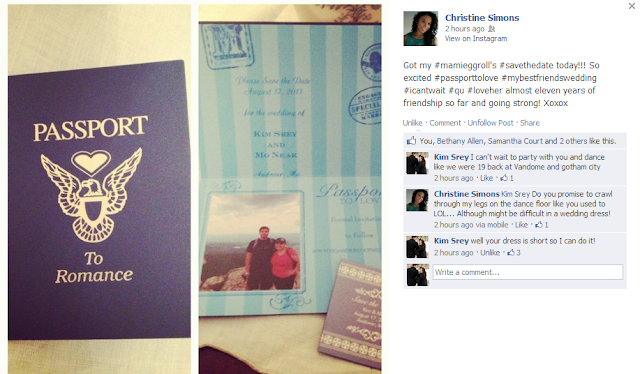 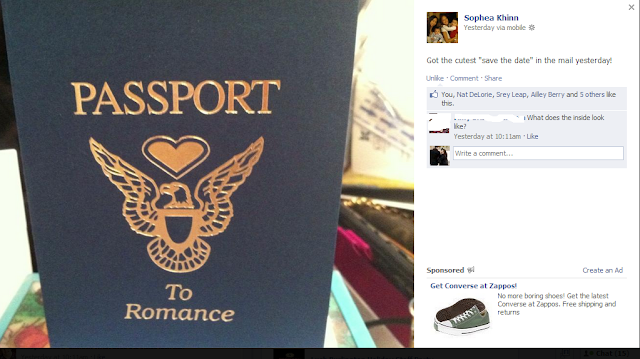 Here is one sent to me via email by my friend all the way from San Francisco. Is that a laundry room? 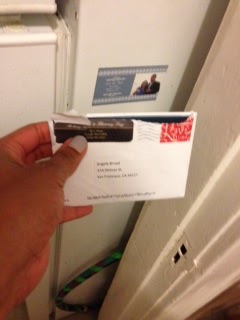 Here's the one on my fridge 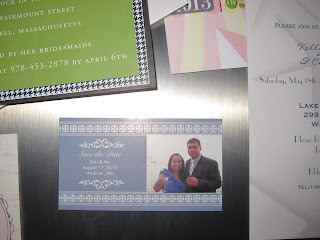