The Mo didn't want to have a big extravagant bash for his 30th birthday party but I still wanted to do something nice for him.

Instead of spending tons of money on a fancy dinner in town, I attempted to whip up a Surf and Turf meal on a budget.  I was inspired by this idea by Market Basket since they were running a special this week on lobster at $4.99 a pound.

I also was going to bake fresh rolls, but I forgot to with all the other dishes I had to prepare. I finally realized I forgot the rolls as we were sitting down for dinner. 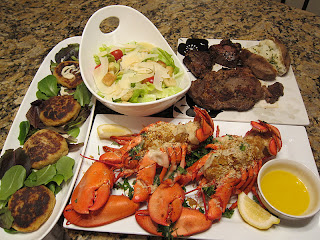 The cost of this meal was about $60.00 including a cheap bottle of wine.  I still could have save some money if I substituted some of the ingredients but I didn't want to trade off quality and flavor.  I looked up the prices of lower end seafood restaurants for comparison purposes and our meal at a decent restaurant would have set us back $120.00 minimum.

Of course you don't get the ambiance and waiter service of a restaurant, but I thought the savings was worth it.  We can use the $60.00 towards my birthday meal or our anniversary meal.

Baked Stuffed Lobsters
Mami's Crabcakes
Easy Caesar Salad
Seared Scallops
Delmonico Steak
I forgot to take a picture of the after product, but pretty much I seared the steak for 2 minutes on high heat on each side then placed it under the broiler for 6 minutes.  If the weather was warmer, I would have grilled it outside.

I also cheated and bought the single baked potato from Wendy's for a little over $1.00.  With so many dishes to prep, I didn't have the time to spend on baking a single potato.

I had the steak and the lobsters both in the oven at once.. gotta love the double oven.. one was on broil and the other was on convection bake. 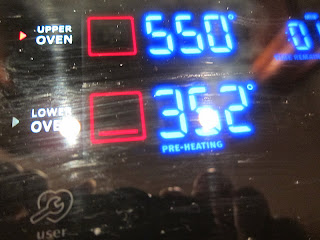 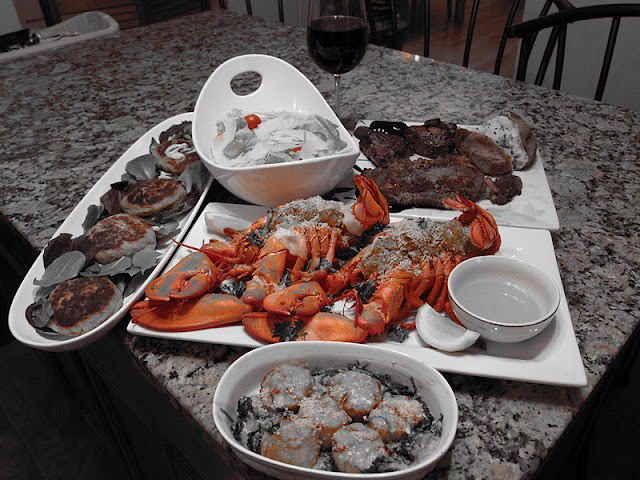