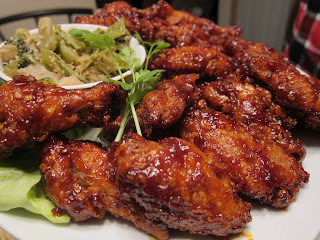 So I've only had Bonchon once in my life... and not at the restaurant either...the Mo's brother brought us a takeout meal that included wings and drumsticks... I have to admit, it was pretty tasty and I would probably eat more of it if it was closer... but the thought of driving to Brighton/Allston (45 mins away), finding parking and then driving back was NOT appealing.. so I attempted to make my own version
After numerous google searches and youtube videos, I decided to attempt my own Bonchon wings.