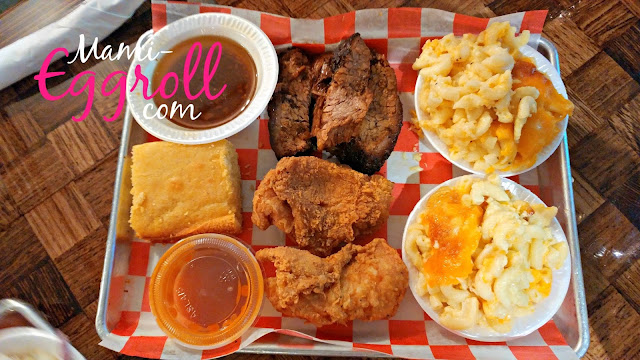 Lowell has lots of international eateries but yet to have a TRUE southern joint serving amazing slow cooked barbecue specialties.  Sure, the Village Smokehouse was a big deal when it first opened its doors many years ago but the food quality sure went downhill once their main focus became the college crowd nightlife.

The Mo and I heard about Mill City BBQ and Brew a few month ago but finally made our way there with Dom and Dary.  We entered through the back where there is a cute patio area with pub style stools and small counter for drinks.  The restaurant used to be the old "Trainview", once our old stomping grounds MANY years ago. 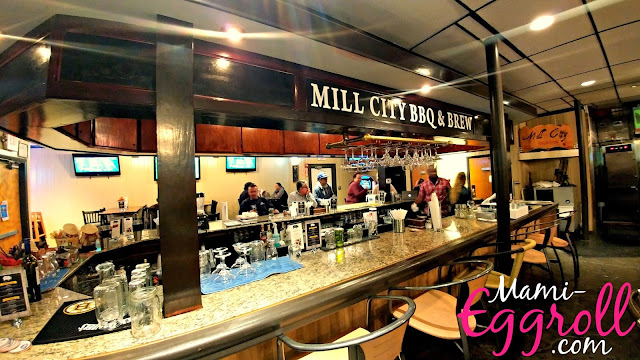 It was a Saturday night around 6 PM and the restaurant only had one other table.  Once we were seated, we were advised that the tables were set up differently because there would be a performance/show later in the evening.  We were still waiting for another couple so we decided to order a round of drinks.  I love MOSCOW MULES and they had a few varieties that was neat.


Surprisingly, I went for the huge mason jar of lemon iced tea and vodka.  It was the size of my head. 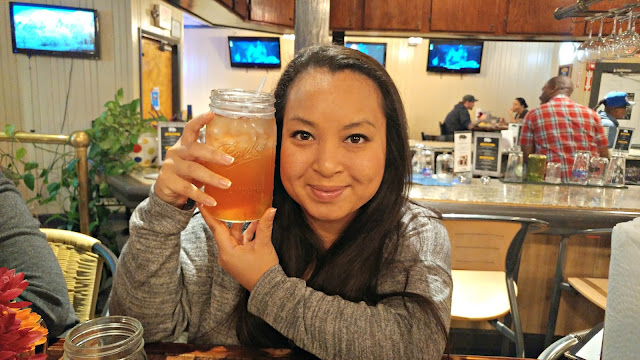 I wished the menu offered share-ables or appetizers that we could order while we waited.  I asked the server and they didn't have anything.  He suggested ordering chicken wings but then advised me a few minutes later that they were out.

Our friends had to cancel last minute so the four of us decided to order three plates to share.  The chicken and waffle was my first choice.  The chicken was good but the waffle was the icing on the cake.  It was fluffy and had a hint of sweetness that wasn't too overwhelming.  The syrup was served in "to go" packages and nothing special. It gave it a rustic kick.


We were afraid we wouldn't have enough fried chicken to share so we got a double meat combo platter with more fried chicken and beef brisket along with mac and cheese.  The brisket was the best I've ever had. I will most definitely order it again! The mac and cheese just came out of the oven and was piping hot.  I wish it was a tab bit creamier/saucier.

Two meat/two side combos are served with cornbread and sets you back almost $20.00.  They are big enough to share but if you LOVE to eat, then you are better off order your own meal.

No visit to a BBQ joint is complete without some ribs.  We had to check out their North Carolina style ribs.  Although we got a double order size or ribs, it was only about 6 ribs total.  I was a bit disappointed.  The coleslaw and sweet potato fries were okay but nothing to write home about. 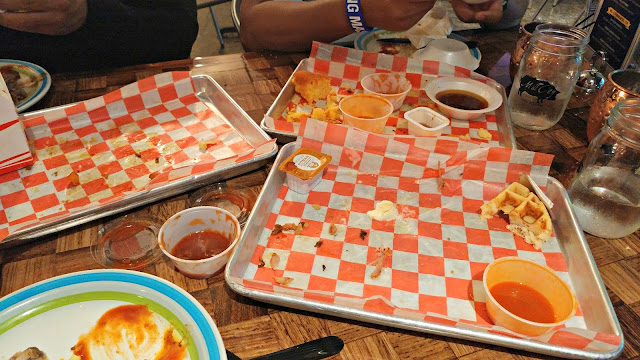 We will definitely be back for the brisket and waffles! They are introducing their delivery service this week so I am stoked about that!  The owner was super friendly and came around and chatted with us about the business.  She told me she opened up a few other restaurants in the South so she basically knew what she was doing.

I was intrigued by dessert but the only selections they had was a couple of pies and a few mason jar dessert with cake or pie with whipped cream.

For a round of drinks, 2 combo platters and a chicken waffle meal, our total was a little over $100.00.