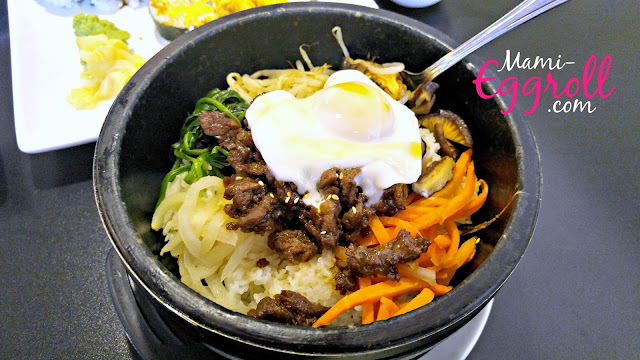 To kick off our four day holiday weekend, Tayla treated me to a nice Asian luncheon in Woburn. She introduced me to 3 Country Bistro on Main Street in the smack of Woburn Center.  I've heard of the restaurant and always thought the name was weird, "country" suggests there would be grits and gravy on the menu. Then I realized, that "3 Country" implied that the menu boasts dishes from Thailand, Korea and Japan.

Street parking is limited on the busy intersection so we found a spot in the parking lot behind the plaza.

The restaurant is cozy with just a few tables in awkward locations tucked in nooks behind doors and curtains. We lucked out and snagged the last table.  There were also a few seats at the sushi bar where diners could watch the sushi chef whip up some maki rolls and sashimi.


I got her into Thai tea, actually that is the reason why we visited. She was craving Thai Tea from the last time we had it at Cilantro next door over.  We both ordered a Thai Tea and still had some left to take back to the office in plastic cups.

We tend to over order and that's exactly what we did today. For appetizers, we started off with a couple of eel maki rolls and a spider roll. Complimentary miso soup was also provided with one of the dishes.

When we walked into the restaurant, we saw a family eating spicy rice noodles. We were intrigued and wanted to order that and assumed it was called the "crazy" noodles based on the description on the menu.  We were wrong, it was wide rice noodles with basil and a light spicy sauce.  Nonetheless it was still tasty despite it not being what we thought we ordered.

I was excited to see Korean staple offerings on the menu. I had to try the bibimbap.  It was perfect. The clay pot heated the rice on the bottom to a nice crisp.  There was ample beef bulgogi  and toppings. It's definitely a better deal at lunch as the same dish goes up two bucks for dinner.

Overall, the restaurant was great. I could see myself being a regular there. Prices were great and service was extremely friendly. The lunch menu is definitely a better deal than dinner.  Parking is fine as long as you use the lot in the rear.  They also offer delivery!!

For 3 maki rolls, 2 entrees and 3 Thai iced teas, the total came under $50.00. It's a bit steep for lunch but we definitely over-ordered and had plenty of leftovers to take home. Thanks Tayla!