Tavern in the Square was a welcoming addition to the Burlington bar/restaurant scene.  With so many new corporate offices being built in the area, there was a lack of bars to support the after work drinking crowd.

Although, its awkwardly located in an executive park, the modern bar/restaurant has plenty of parking and a great al fresco area.  The clientele during the lunch rush and after work are typically business men from the area.  There are lots of umbrellas, plants and trees to camouflage the background traffic.  After throwing down a few drinks, who even notices the cars anyway?

During a beautiful afternoon, my friends and I were able to score seats on the patio.  We split a few appetizers and ordered a round of drinks.  The Thai calamari was served on a large platter with daikon and drizzled in Thai sweet chili sauce.  The portion was small and it was more "tapas" like.  I think our order was just messed up because the table nearby also ordered it and got doubled the amount.  The drinks were good. I got the Buddha martini which had lemongrass and ginger and my friend got the mai thai served in a cute Hawaiian mug.


The nachos was massive and they charge extra for meat and guacamole, I guess that is typical at most restaurants.

I was surprised to see chimichangas on the appetizer menu, as that is usually an entree within itself. The Adobo chicken chimichangas arrive cut in half and served on a bed of  salsa and cilantro sauce.

Can't go to a bar and not order the wings! At tavern, there are 3 flavors: Mongolian (which is an Asian sauce), Buffalo and Angry Ale, all served bone-in or boneless.  We went with the bone in buffalo that was supposed to be served with celery, carrots and buffalo cheese but it came sans the veggies.

Overall, it's a great place to catch up with friends, go on a date or even meet up for a business lunch.

Here are pics from other visits.... 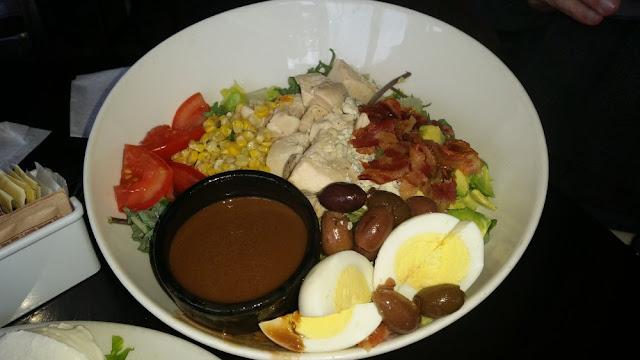