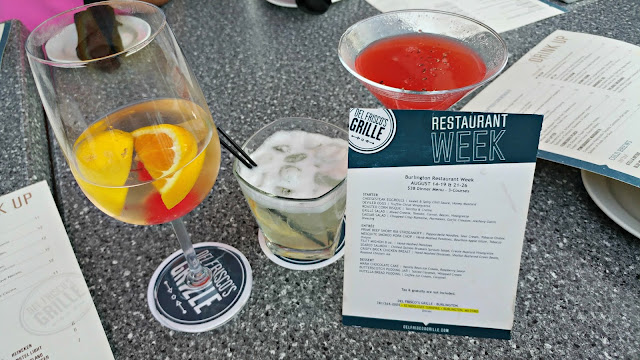 The girls and I decided to hit up Del'Frisco's Grille in Burlington, MA for Restaurant Week Summer 2016.  It was a nice cool summer day so we opted for patio seating, overlooking the parking lot. 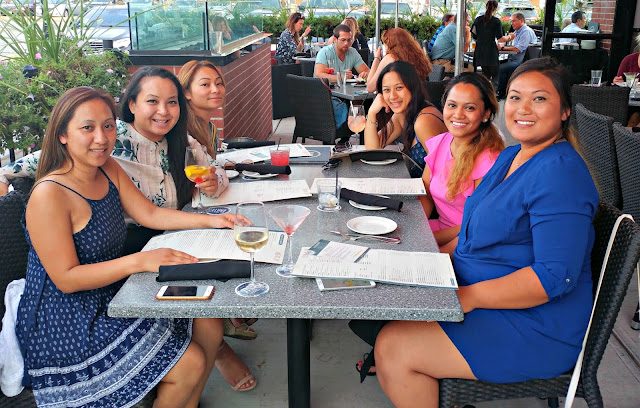 The prix fixe dinner menu was $38.00 for a starter, entree and dessert.

Most of us went with the Restaurant Week menu and others ordered a la carte.  We shared We washed those down with a couple bottles of wine and a few signature "VIP" cocktails made with sweet Hawaiian Pineapple infused Svedka Clementine vodka.

For starters, some of the girls got salads, soup or deviled eggs but I had a coupon for the steak and cheese eggroll, which never dissapoints.


The Asian Street Bao Sliders were just OK. It was BBQ pork with pickled daikon, carrots with cukes and cilantros.  I could have done without it.


For dinner, the popular choice was the 8 oz filet mignon served with mashed potatoes.   Most of the girls went with medium and the steak came out well. Lisa didn't mind though, I'm embarrassed when she orders her steak cooked well.  Luckily management had the kitchen prepare additional filets to fulfill the original request.  Chewie and Odie benefited the most as they got to eat all the leftover steak for a week! 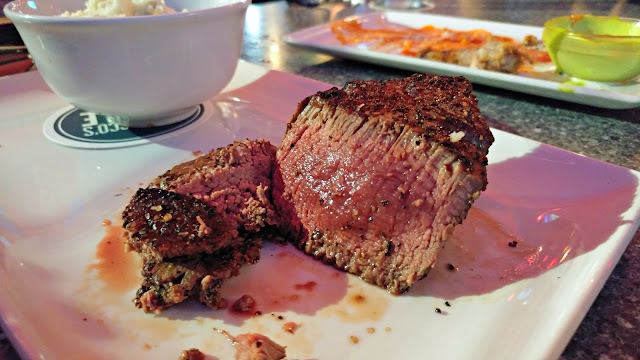 I went with the Wednesday special, the General Tso chicken.  I know right?? Come to Del Frisco's and order Chinese food??? It was actually really good! The sauce wasn't overwhelming and there were generous amounts of chicken.

Nat sat across from me and tried the meatloaf. I actually was eyeing that myself so I was excited that she ordered it. The meatloaf was topped a wild mushroom Bordelaise sauce and served with mashed potatoes.  I sampled a piece and the sauce was a bit more tangy that I was expecting.  It was a huge portion and she packed it for the hubby to finish later.

We couldn't get through dinner but we still had dessert left. I think we ordered one of each thing of the restaurant dinner menu. The warm chocolate cake was drizzled ion raspberry sauce and vanilla ice cream. It was heavenly and gooey.

I didn't think I would like the Nutella bread pudding but it was actual pretty good.

It was a fun much needed girl's night out. We giggled and had a great time! Some of the dishes were better than others but the company was awesome.